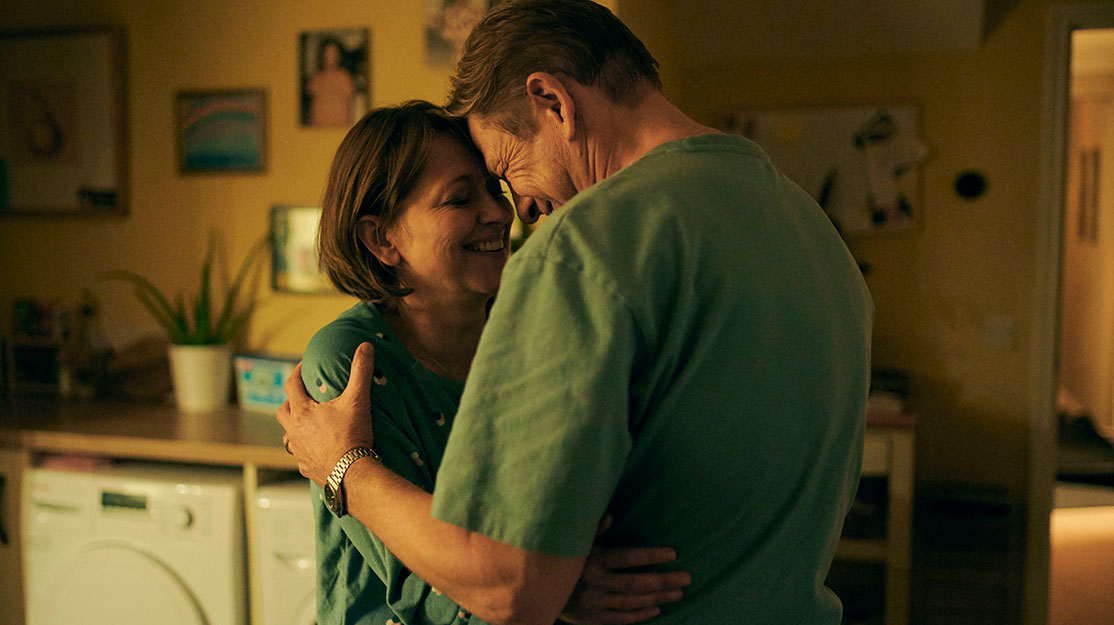 Writer and director Stefan Golaszewski and stars Nicola Walker and Sean Bean take DQ down the aisle to explain how they attempted to bring a detailed and realistic portrait of a relationship three decades in the making to TV with BBC miniseries Marriage.

As anybody who’s ever been in a long-term relationship can attest, the biggest rows can often develop from the most trivial sources. So it’s fitting that new BBC miniseries Marriage, which offers a detailed look at a couple three decades into married life, begins with a disagreement over a baked potato.

The four-part series stars Sean Bean and Nicola Walker as Ian and Emma, who have been husband and wife for 27 years. The opening scene finds the couple in an airport café at the end of a holiday, with Emma returning to the table and telling Ian that he will have to settle for chips rather than his desired baked potato, as the latter isn’t on the menu – although she didn’t explicitly ask if one could be prepared.

By the time they have boarded their flight, what started as unspoken annoyance from Ian has escalated into an expletive-laden argument across the aisle, before anxious flyer Ian silently reaches for his wife’s comforting hand as the plane takes off.

This microcosm of married life sets the tone for the series, which aims to paint a particularly realistic picture of a couple who have been together forever. It comes from writer and director Stefan Golaszewski, who reveals during an RTS preview of the series that the opening scene was partly inspired by real life.

“One of the earliest things was the handhold at the beginning of episode one across the aisle. I saw two people do that on a plane, and I just thought it was incredibly beautiful,” Golaszewski says. “They hadn’t been arguing like they do in our show, but I just thought that act of looking after each other summed up quite a lot. So that was one of the early images I had.”

Golaszewski is no stranger to writing about relationships and family, having created and written Bafta-winning BBC sitcoms Him & Her and Mum. His most dramatic work to date, Marriage came from a desire to change the way such relationships are typically depicted on TV.

“So often, you find in fiction that marriages are things that people are desperate to get out of and are terribly sad in. People seem to be keen to cheat quite a lot,” he says. “But when you look around yourself, you see all these people just trying their best, trying to cling to happiness and trying to make things work, and finding things hard and getting things wrong, but acting out of hope rather than malice. So I suppose I wanted to tell that story.”

While many drama projects attach the acting talent at the earliest possible opportunity, Golaszewski admits he did not have his eventual leading duo in mind when he wrote the scripts.

“I never have an idea [about the cast] when I write,” he says. “You don’t assume that anyone’s going to be interested. As a writer, you assume the worst; you assume your script’s going to go out and everyone’s going to hate it. So it would be terribly presumptuous to write something for an actor, really.

“Also, I think [writing with specific actors in mind] can close down the options for progressing the characters if you go, ‘Oh, it’s going to be this person.’ I don’t think it really works like that – never has for me, anyway.”

Thankfully, there was never any question of Bean and Walker not being interested in coming on board the series, which is produced by The Forge Entertainment and The Money Men for BBC One and BBC iPlayer. All3Media International is the distributor.

Walker, who has recently earned rave reviews for her performance in fellow BBC drama The Split, says: “Stefan was the draw for me. He’ll probably hate me saying that, but Stefan was the main draw straightaway. I’m a fan of his work anyway. You wanted to read all four [scripts], and there’s such a reward for reading and watching all four. It’s a complete world he’s built, and a complete story.”

In the show, Walker’s Emma is doing well at work, while Ian has been made redundant. As Ian struggles to find a new job, Emma’s career is going from strength to strength, leading her to go away for a conference with her handsome young male colleague Jamie, played by Henry Lloyd-Hughes (Killing Eve, Ragdoll). Meanwhile, Ian is hoping to get closer to his and Emma’s daughter Jessica (We Are Lady Parts’ Chantelle Alle), who has just introduced her parents to her boyfriend.

As well as the opportunity to work with Golaszewski, Walker was drawn in by the fact Marriage eschews many elements viewers have come to expect from contemporary drama series.

“Often in drama, we have to have hugely dramatic moments and revelations,” she says. “The format of drama now means that something has to happen at a certain point in each episode every week. And when I read these scripts, I just thought, well, here’s Stefan completely rejecting that that pattern and writing about these two people in the most honest way.

“Awful things have happened to them in their 27-year marriage, but that isn’t where we meet them. But you do see the effect that has realistically in a long-term, loving relationship – the fact that it’s both difficult, at times, and joyful. And a lot of the time it’s just life lived. I haven’t seen that on television before, so that’s what drew me.”

Bean, who is known around the world for roles in movie franchises such as The Lord of the Rings and James Bond, not to mention HBO fantasy series Game of Thrones, also believes the show contrasts sharply with most other dramas. He says of Golaszewski’s approach: “He broke the formula of this kind of pedestrianised way of looking at drama, where there’s got to be a beginning, a middle and an end, a bit of stakes, a bit of action, there’s got to be this and that, and it’s so boring.

“I’m so bored with a lot of programmes, especially about detectives. I don’t know why people always want stories about police detectives. When I watched this, I was quite shocked… it just dips into a moment in time, to three weeks in these people’s lives. You could drop in another time and you’d probably have a totally different story, and that’s what fascinated me. It’s just a study of two people in a long, long marriage, warts and all. It’s striking and it’s quite shocking. I love that kind of thing.”

Walker and Bean also highlight the level of detail in Golaszewski’s scripts, with the writer explaining in a previous interview that he believes it’s crucial the actors deliver the ‘erms’ and ‘ers’ precisely as they are on the page.

“You have to watch all four episodes together to fully appreciate the minutiae, the fine detail and pathos Stefan created with his scripts and his photography,” says Bean. “It was just unusual and like nothing I’ve ever read before.

“The way the characters speak is so natural – it’s the way we all speak, really. We’re quite hesitant and we all change our minds mid-sentence.”

Despite both being British drama heavyweights, Walker and Bean had never met before being cast in Marriage, which required them to convincingly portray the chemistry of a couple who have been together for decades. The process was aided by a week-long rehearsal period, which Walker says is “unheard of” these days.

“I remember doing it when I first started acting, when I was 22. You used to rehearse for a week before you started a drama, but that has long since become a thing of the past,” she says. “So that was incredibly helpful. It was brilliant fun just to be with Stefan and Sean for a week in a Covid-safe marquee.”

Bean concurs: “That’s a luxury these days, having that amount of time to rehearse and to get to know each other. I think we clicked pretty quickly. It felt very natural and I think we had wonderful chemistry.”

Chemistry of a more physical nature is also frequently important in relationship-focused dramas, with many productions now employing an intimacy coordinator to guide sexual scenes and ensure the comfort and safety of everyone on set.

While it’s unclear whether such an individual worked on Marriage, Bean faced some backlash following a recent interview in which he said intimacy coordinators “spoil the spontaneity” of sex scenes and could “inhibit” performances by “bringing it right down to a technical exercise.”

The comments prompted responses from a number of well-known actresses, including Rachel Zegler (West Side Story) and Jameela Jamil (The Good Place), who came out strongly in favour of the increasing use of intimacy coordinators. Zegler tweeted: “Spontaneity in intimate scenes can be unsafe. Wake up,” while Jamil addressed Bean’s “technical” comment, writing: “It should only be technical. It’s like a stunt. Our job as actors is to make it not look technical. Nobody wants an impromptu grope…”

The debate adds another dimension to a series that has met a polarising response from critics, with some hailing it a masterful observance of married life and others feeling that Golaszewski’s focus on minutiae makes for less than compelling viewing.

Either way, the writer and director hopes that viewers will connect with the show’s realism and find that its characters are relatable.

“The struggle of living in this world and being a person; having a house and having to pay for stuff; having insecurities that don’t really make much sense, and not knowing anything for certain – not knowing what you feel, not knowing what to say, not knowing what’s going to happen tomorrow… that kind of fundamental uncertainty is what I guess I’m trying to represent.

“I just hope people feel that we’re talking to them about what it’s like to be them, rather than a happy, clean, simplistic, sanitised ‘TV person’ who knows what to say to everyone, knows how they feel and knows how to express it, and never goes to the toilet. My little boy said that to me yesterday – ‘Daddy, why does nobody ever eat or go to the toilet on TV shows?’ Well, wait until you’re old enough to watch one of my shows…”