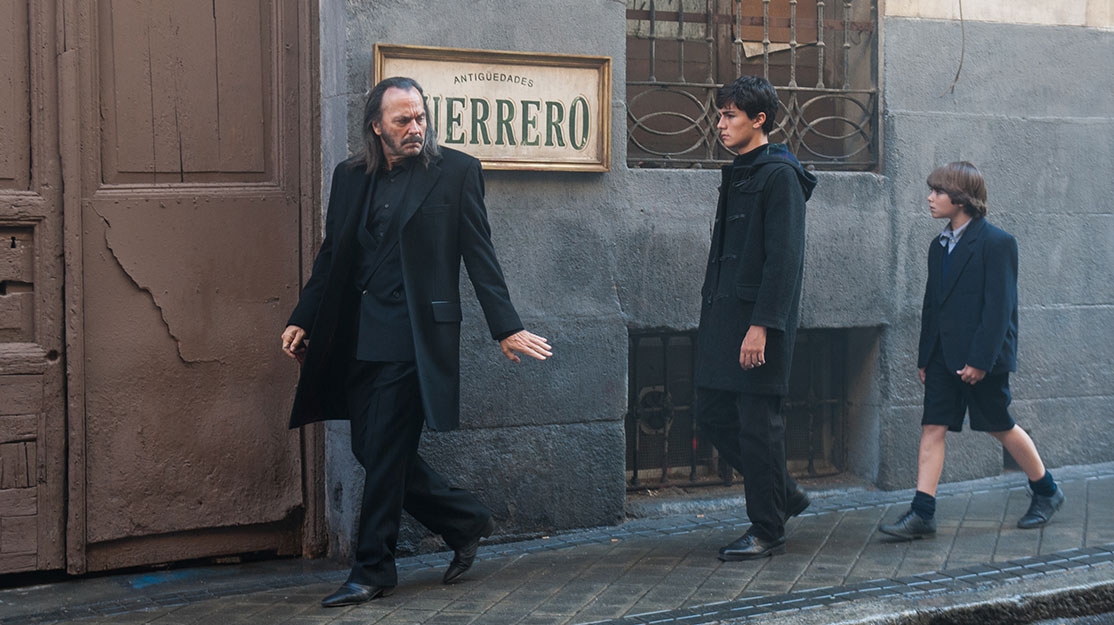 Gigantes (Giants) director Enrique Urbizu takes us through the opening scene of the Movistar+ drama, which focuses on a family that runs a prestigious antiques business as a front for their drug empire.

The first minutes of a movie or show are decisive in establishing the tone, the heartbeat and, if you allow it, the style that should continue throughout the story. It is the entrance into history for the viewer, determining their first impressions.

Gigantes begins with the image of a puddle reflecting the cloudy sky of Madrid. There is also a dead bird. Three inverted figures approach until they are stood in the dirty water.

Two children follow their father, Abraham Guerrero, in a strange procession: in single file, the trio are dressed for mourning. The bells ring to mark death. It’s cold. Nobody talks, nobody cries. A fence encloses the frame.

The procession reaches the door of an old warehouse at the stone walls of the historical centre of Madrid. A wooden sign reads ‘Antigüedades Guerrero’ (Guerrero Antiques). Following a gesture from their father, the children stop by the door. Abraham enters. The children look in opposite directions: Daniel on the left and Tomás to the right of the frame.

Abraham comes out with an old leather suitcase, and the three continue on their way. Stone, wood and leather – textures of the warrior world – are visible.

Looming over the entrance to the Guerrero building is an image of Saturn Devouring His Son, originally painted by Spanish artist Francisco Goya, in the shape of a rosette. It represents the curse of the family – the father who consumes his descendants. This is an allegory that becomes the ‘soul’ of the first chapter of Gigantes and an anchor of meaning for the entire series.

Preceded by the shadow of Abraham, the sad procession enters a building and climbs the stairs; stairs that will be linked forever to their destinations. Dark, wet, eternal.

On the table is the suitcase, which is full of money. The children count bills. Tomás, the smallest, seems the most meticulous. Write carefully the figures in your notebook. Try to hide your tears.

Abraham, sitting on his throne, watches over his territory. His presence imposes silence. In a corner of the room, a baby is stirring in his crib. He starts crying.

It has to be Daniel, the older brother, who cares for the little ones. “Today you can mourn your mother, tomorrow no longer. She does not cry anymore in this house,” Abraham dictates.

Emotions are buried; it’s forbidden to show any hint of weakness. The wild and permanent exercise of power through violence.

After burying their mother, the Guerrero brothers face a wild education, a sentence that marks them for the rest of their errant lives.

These first minutes condense some of the main narrative and aesthetic keys that make up the staging of Gigantes.

The series is stylised, tense, risky, adult and complex. We wanted to be more attentive to the characters than to the development of a criminal plot. The characters are what infect the character of the series.