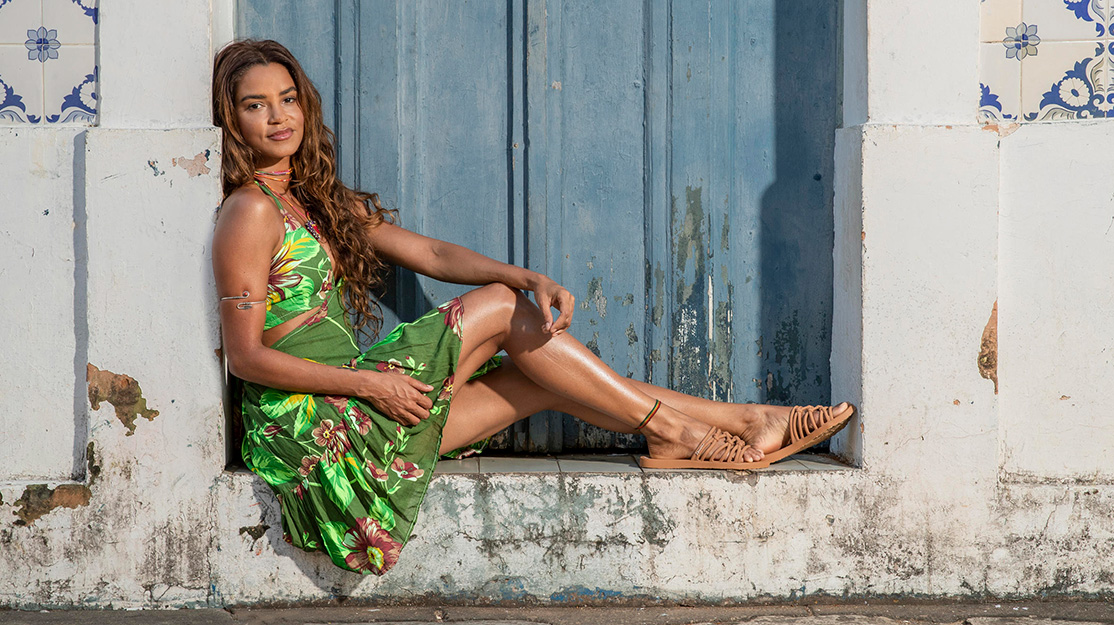 Writer Glória Perez opens up about her latest telenovela, Brazilian series Travessia (The Path), and reveals why curiosity is the key to these long-running dramas.

Currently airing on Brazil’s Globo, telenovela Travessia (The Path) follows what happens when one woman’s world is turned upside down by a very modern phenomenon: deepfake technology.

Written by Glória Perez, who penned The Clone and International Emmy winner India: A Love Story, the show launched in October last year with a cast that includes Chay Suede (A Mother’s Love), Romulo Estrela (A Life Worth Living) and Lucy Alves (A Mother’s Love).

Here, Perez tells DQ more about the story and the central characters, the challenges of writing the huge number of episodes demanded by the telenovela format and why these long-running stories continue to be popular around the world.


Please introduce us to The Path.
The Path is a telenovela that shows human dramas, ups, downs, loves, disappointment, ambition and the debate about ethical and moral limits in a world that is still learning how to deal with the negative and positive aspects of the Internet. It’s Brisa’s story, a strong woman who has the direction of her life changed by a fake image and loses her childhood sweetheart to greed and power. After that, she will fight to rebuild her journey, raise her son, find true love again and find out the truth about her origins.

What are the origins of the project?
In general, I wanted to talk about the path – this passage that we’re living through and that we don’t even notice at times how large it is, from one world to another. The world is settling into a different way, human relationships are happening in a different way. This enchants us greatly, but at the same time it brings about an unfamiliarity. I wanted the telenovela to show how people walk the path of this moment.

How would you describe Brisa when we first meet her and how do we follow her through the series?
Brisa will go through horrendous circumstances, but she has the quality – like my female protagonists always have – of being an independent, strong woman. She bends but doesn’t break. Brisa is exactly like that: intense, with a lot of personality and attitude, and who is also very sweet and positive.

After being orphaned at a young age, she grew up going from home to home, learning how to make do on her own, how to defend herself alone. She has the strengths and the shortcomings of survivors. Like all my female protagonists, she’ll face challenges that she’ll have to deal with as she walks her path, with the mistakes, the victories, the courage and the weaknesses that are part of human complexity. And what will put her on the side of the strong is not her fall, but her skill to get back on her feet.

I told Lucy [Alves, who plays the protagonist] that if you’ve never fallen, if you’ve never been knocked down by something you’ve lived, how will you know that you’re strong? Brisa is tested by life from the get-go. And she picks herself up to fight. She knows how to get up.

Which other key characters do we meet in the story?
Ari, played by Chay Suede, is that typical young man from a small town, who is the great hope of that town. He’s an intelligent man who goes to study abroad. He’s a boy who has everything laid out before him and knows what he wants to achieve. He wants to be the replacement of the most fantastic man he’s ever met, Professor Dante [Marcos Caruso]. But due to circumstances, he gets to another environment and discovers a world that is much bigger than that small town, and he ends up getting seduced by the things he fought against. That’s his conflict – he’s attracted to everything against which he fights.

Then Oto [Romulo Estrela], the other corner of the love triangle, was a computer expert when he was younger. He hacked Moretti’s company and was so successful that Moretti [Rodrigo Lombardi] hired him to protect his computers. When the story begins, Oto has this job. He can seem mysterious because he has to stay on the down-low, he has to hide. He’s an adventurous person who’s enjoying the world, having a taste of life. With Brisa, fate makes them meet and develop affection for each other.

How would you compare it to your previous series, such as The Clone or India: A Love Story?
Speaking in general terms, my telenovelas are stories meant to touch people, to involve them through emotion, amuse them and make them think, make them meditate over some subjects. I always do my best to bring up themes that are relevant and make people debate and ponder; matters that are very important to the audience.

Which typical telenovela elements do we see in The Path, and how have you changed the format or taken it in a new direction?
All my characters have histories, and using them, we start discussing some subjects, like the battle of men against machine – a heavy subject, but one that can be talked about in a lighter way, with humour, and lead to some consideration at the same time. Whoever wants to think about the subject, will do it. Whoever doesn’t, will just laugh about the situation.

We’ll explore all the new human conflicts that the Internet has created. With each technological advancement, there’s new conflicts. The contemporaneity of technology is a background that affects everyone’s lives, all the character groups are affected by it. This is the life that we’re living today.

How would you describe your writing process on the show?
The writer always writes what they’re interested in. And writing is a way to ponder a subject. I’m very interested in the things that are happening around me, and I’ve always been very interested in observing how the advances of technology will introduce humanity to new dramas, new conflict possibilities.

What is the secret to writing the huge number of episodes demanded by telenovelas, and how do you keep the story engaging at the same time?
It’s a focused work, in which you have to speak and feel for 50 or 60 different characters. Many times, I go from one type of emotion to a completely different type. You need to have a break, look at the infinite, to search for the sensation inside of you. And it comes, you go back and go on.

How do you work with director Mauro Mendonça Filho to establish the look and style of the show?
We’re a very fast, crazy pair! It’s my second project with Maurinho, the first was Merciless, a series we are very proud of. I was very happy to meet him again to tell this story. He enjoys this subject, so it’s a precious thing when you find someone you already like again and they’re in perfect sync with you at the same time.

Where is the show set and how have you used locations in the story?
The telenovela is set in Maranhão, Rio de Janeiro and Portugal. I’ve always been very curious about Maranhão. It’s a state with a very unique culture, a lot of personality, due in part to how it was formed: it started out under French occupation, then the Dutch come in and only after that the Portuguese arrived. Besides that, there are native peoples and Africans there, and all this mix results in a rich cultural melting pot that is reflected in the folklore, the art, the music and dance.

Here in Rio, I choose a place to be the heart of this telenovela, which is Vila Isabel, a neighborhood that has the same personality as the city, musical, happy, with a very interesting cultural tradition, too. Portugal, in turn, is the reference for a Brazilian who leaves Brazil to earn his life in another country, something that is happening a lot. I’m not going to show the Portuguese culture this time. What makes sense for this story is that this character, Moretti, who had to leave the country, would go to work somewhere else. And Portugal seemed very viable to me, especially for his profession, which is a builder.

Were you involved in casting Chay Suede, Romulo Estrela and Lucy Alves? What do they bring to their roles?
Yes, I’m involved in the casting. I picked Lucy, for example, because I’ve liked her a lot since seeing her on The Voice Brasil and, from then on, I’ve wanted to have her on a telenovela of mine. We, the authors, have to recognise each actor as an instrument. I have a score, that is the character, and the actor has to play it as written. If by chance the actor does not match what you imagined for them, you need to accept them and have the time to adapt the role to their characteristics.

The author has everything to do with the cast. And we have to fall in love with the actor to write for them – just like the director, who’ll need to live with the talent daily. It must be an aligned choice, in harmony, a coincidence of choice. Because if both parts don’t agree, it doesn’t work.

What lessons about writing telenovelas have you learned from previous projects?
I always try to show what I find interesting, what makes me curious. I wrote a telenovela, for example, with the campaign for missing children. And how did I make that choice? I was going through the city and saw a group of women that caught my attention, and they had pictures of children with them. They were there hoping that a passer-by would recognise one of them, so I made a character to bring the campaign into the telenovela. And on the first day the campaign was broadcast, the first child showed up. It’s a matter of paying attention to what is around you.

How would you describe the status of telenovelas? Has focus has shifted to shorter series?
Telenovelas have a loyal audience and I do not see that changing. But I notice that in both telenovelas and shorter series what matters is the construction of the story and the manner in which they engage the audience.

Why do you think telenovelas remain hugely popular around the world?
Telenovelas touch people. That’s how I think of building my stories. I want to touch the human side, speak from the heart and enter through the door of emotion. And this is universal, no matter the place – when you have a good story, it touches the audience.

What are you working on next?
For now, I’m focused on The Path. When I’m writing a telenovela, my work is a 100% dedicated to it.