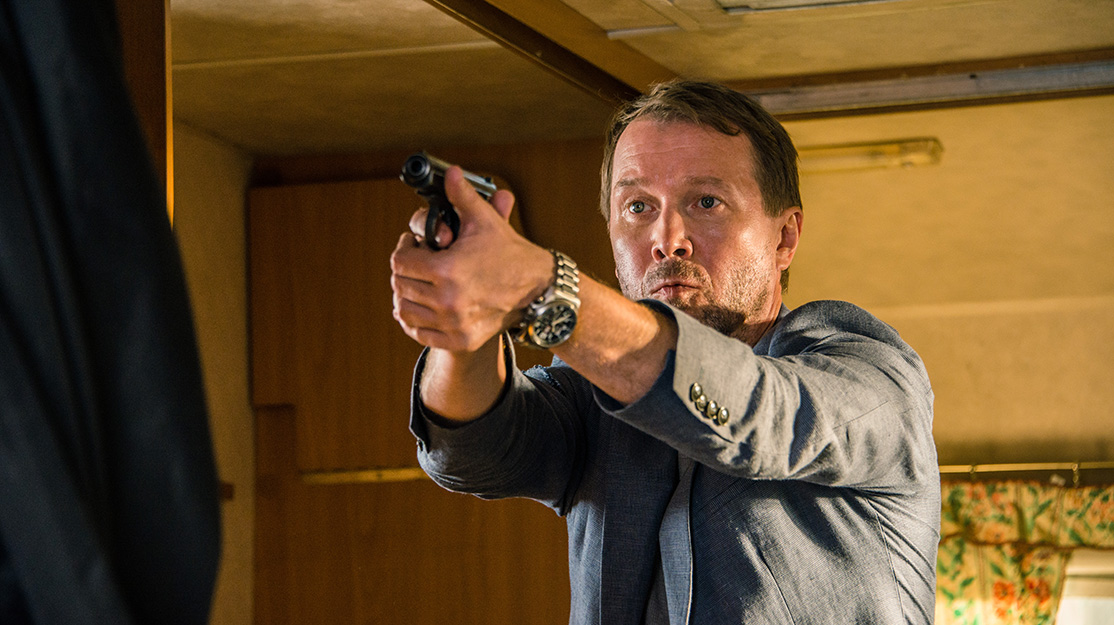 Director Eduard Parri breaks down his approach to filming Awake, a Russian drama based on the US series of the same name about a police officer stuck between two realities in which either his wife or son are dead.

In short-lived US drama Awake, which ran on NBC for one season in 2012, Harry Potter star Jason Isaacs played a police officer whose family are involved in a serious car accident. He then finds himself switching between two realities whenever he goes to sleep: in one, his wife is dead, while in the other it’s his son who didn’t survive the crash.

The series has now been resurrected in Russia, where it has been remade by producer and distributor Star Media. After surviving a horrendous car crash that also involves his wife Svetlana and his son Kirill, Pavel Frolov’s waking life is split into two, one where Kirill has survived and the other where Svetlana lives. Every day, Pavel alternates between the two realities as he tries to bring them together in a desperate attempt to find out who or what caused the accident. In the meantime, he also tries to improve his relationships with his wife and son after many years of neglect.

Awake launched on streaming platform IVI at the beginning of July and will air on Channel One Russia later this year. The producers are Artem Dollezhal, Oleg Tumanoy and Vlad Riashyn, with Yevgeny Mironov (Land of Legends) in the lead role previously played by Isaacs.

Here, director Eduard Parri takes DQ inside the making of the series and explains how it was adapted for Russian audiences.

How did Awake land on IVI?
Originally, Star Media saw Awake as a traditional TV project. But as we continued to work on it, the pandemic broke out and changed the world drastically. Online platforms were elevated to a completely new level. I’m used to releasing films on TV or theatrically, and I know how to get the audience’s feedback there. Understanding what the viewers think about Awake proved much harder for me when the project was released on IVI.

What intrigued you about the 2012 US series Awake, which your series is based on?
I tried to avoid watching the original series for as long as possible so as not to repeat it. In the end, I only did so to check if the Russian version had missed anything important that our American colleagues discovered within this story.
I much prefer the Russian adaptation. The American protagonist has only one problem: his family got into an accident that split his life between two realities. But our writers have gone further and took a more meaningful approach to this collision. They created an initial dramatic point: just before the accident, the main character’s family is on the verge of breaking up. Having survived the crash, our protagonist is crushed with guilt over his wife and his son. This gives the Russian version more depth and makes it more poignant.
American writers have better production means at their disposal, such as bigger budgets. For example, we have to shoot six or seven minutes of a script a day, while the Americans could afford to shoot four minutes or less, which affects the production tremendously. But we have other strengths: instead of focusing on the story’s attractions, we touch the viewer’s soul.

How was the original story adapted for Russian audiences?
We have steered quite far away from the American version. After all, the original writers were hoping for a second season, so they didn’t answer the main question: why did this happen to our hero? They didn’t want to reveal it until the end of the second season, but the series was never renewed. We took the finale of the American series apart scene by scene to get down to the original writers’ intentions and used it to craft our own finale.

What were your first thoughts on the visual style of the project?
We were shooting all over Moscow, aiming to show all the capital’s seedy sights. I asked the production designers to turn the city into a kind of Shanghai – a city full of hustle and bustle; a busy, eclectic space filled with skyscrapers, wooden buildings and kiosks. After all, detectives are the kind of people who work all across society’s classes, at the very top as well as the very bottom.

How did you choose Evgeniy Mironov to lead the cast as Pavel?
When we were looking for the lead actor, we auditioned every well-known and less well-known Russian actor. However, we didn’t discover a talent who would embody the main character. It felt like a dead end. I don’t remember who was the first to mention Evgeniy Mironov’s name, but I jumped at the opportunity. I think many directors dream of working with such a renowned performer. After we made him an offer, he had a long think about this project and me as a director before finally accepting.

We have seen countless detectives on screen before. What is different about Pavel, the detective in Awake?
Our character is driven by a big personal drama. This drama is what convinced us to take on this project. After all, Awake is not just a story about a policeman living in two different realities. When I was first offered this script, I immediately turned it down, thinking it was a typical detective story. Eventually, I was persuaded to read the first half of the series. And when I started reading, I immediately connected with the strong drama at the core of the story.

Yevgeny had to undergo intensive training for the role. What did that involve?
Long before we started shooting, he and I created his preparation plan. For three months before the first day of filming, we met every week with our consultants, read the script and went to Evgeniy’s weapons and martial art classes. He also wanted to visit an actual crime scene, but the police advised us first to visit the Central Morgue where they keep the bodies. Unlike a regular morgue, in this one the bodies get examined. We ended up spending half a day there. It gave us a lot of insight into the characters.
After the morgue, there was no need to go to the crime scene – we had enough material to work with. That visit gave us a better understanding of what the people who work there are dealing with daily. For them, death is a routine. I had an immediate defensive reaction: I couldn’t believe that these were real human bodies. It felt like they were just mannequins.
For the staff, it was just a part of their daily lives. For example, in one of the autopsy rooms, we saw two workers having a casual chat while examining a corpse. Some of the staff members listen to music as they do their job. Evgeniy’s character would also be unmoved by the sight of a dead body at a crime scene. This was important to understand.

What difficulties did you face on set?
Personally, the most difficult thing was to translate the complexity of this non-linear script onto the screen. We had to immerse ourselves into one of the character’s realities and then quickly switch to the other one, moving between them all the time. In short, you had to give it your all to stay focused on the story. In the end, it all came together thanks to the support and joint effort of the whole production team.

How difficult was it for Evgeniy to play Pavel in two different realities?
We only had time to read and break down the first six episodes out of 12 with Evgeniy before going into production, which proved to be the greatest difficulty. After filming the first six episodes, we had to face a difficult question to which we had no answer: how does our character develop from here on? We had to stop filming to rewrite the script for the last six episodes and come up with a different ending. It wasn’t until three or four months after that that we went back into production.

What conclusions do you think viewers will draw from watching the series?
Family is everything. It’s your life’s foundation. Work should never be more important than family, because love is not a fleeting feeling – it takes a lot of hard, daily work.

Are you hoping for a second season of the series?
Absolutely not. We have answered all the questions of the story, so there’s nothing left to tell.