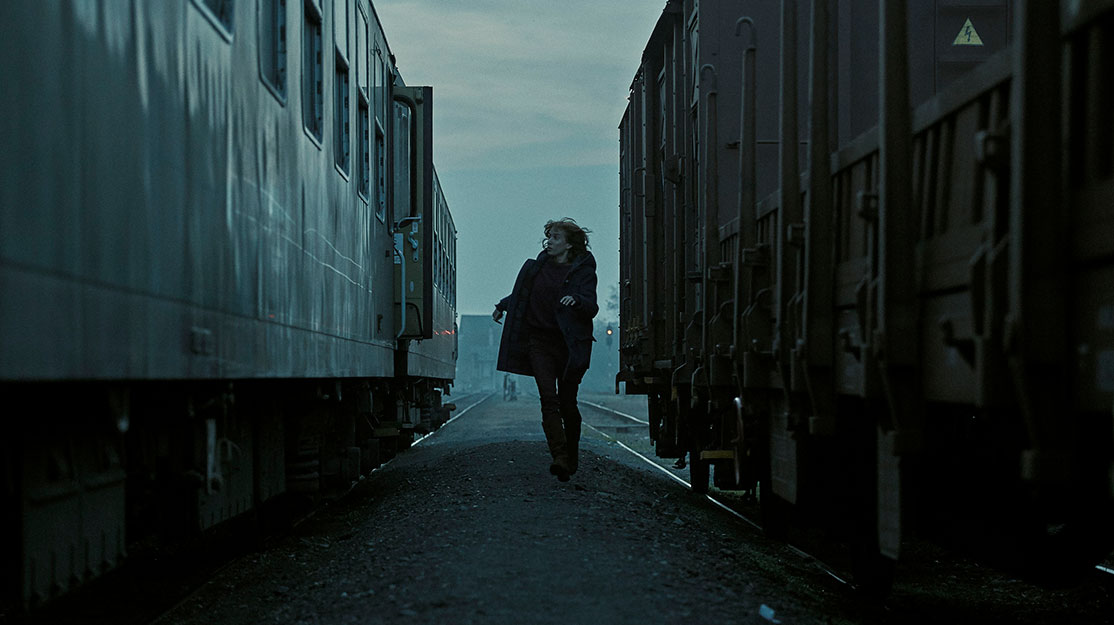 A woman battles to uncover the truth about her husband’s disappearance in HBO Europe’s latest Czech drama, Bez Vědomi (The Sleepers), an espionage thriller set in 1980s communist Czechoslovakia.

Along a bustling West London road, a discreet, narrow passageway leads to a quiet, pretty street with flowerpots standing on the cobbled surface outside a row of terraced houses.

Cars also line the road – a Triumph, Mercedes and a blue Mini – but their vintage gives away the fact that this setting is not from the present day but the 1980s, when change is in the air across Europe amid the final days of the Cold War.

A camera team is set up outside one doorway as a woman wearing a blue jumper, red tracksuit bottoms and headphones enters the frame, jogging towards them from one end of the street, greeting a passing postman and entering the house. It’s a small, fairly insignificant moment but it sets the scene for HBO Europe’s Czech drama Bez Vědomi (The Sleepers).

The jogging character is Marie (Tatiana Pauhofová), who together with her political dissident husband, Viktor (Martin Myšička), fled communist Czechoslovakia 12 years ago. Now living in London in October 1989, they plan to take advantage of an amnesty and return to their home country.

Soon after they arrive, however, they are hit by a car – and when Marie wakes, her husband has disappeared and no one knows anything about him. In a country that still considers Viktor an enemy and one that Marie no longer understands, she faces the biggest challenge of her life to uncover what has happened to him.

Three days of filming in London cap an 87-day shoot for the series, which is mostly set and filmed in Prague. A skeleton team of producer Tereza Polachova, director Ivan Zachariáš, DOP Jan Velický and star Pauhofová have made the short trip to the UK, where they are working with a local crew to capture the exterior scenes that are needed to round out the production.

Written by debut TV screenwriter Ondrej Gabriel, The Sleepers is set against the backdrop of the turbulent political changes that swept across Czechoslovakia at the time, with the six-part series launching this November to coincide with the 30th anniversary of the Velvet Revolution that brought about the fall of the communist regime.

“Andrej is an old buddy. I’ve known him since 1991, as we were schoolmates,” says HBO executive producer Polachova. “He brought this story to us and I was immediately intrigued by it and wanted to develop it with him. Spy dramas are not common in Central Europe, so it was the right time to develop this. That was ages ago, and now finally we are shooting.”

But while espionage thrillers more commonly see a spy from elsewhere sent on a mission in this region, HBO’s creative team thought The Sleepers could provide a fresh take on the genre. “We’re so used to traditional shows where [John le Carré character] George Smiley and the Russians use Central Europe as a chess board to move people around,” says HBO VP and fellow executive producer Steve Matthews. “One of the first thoughts we had was, ‘Wouldn’t it be fun to see that story from the inside of one of those territories, rather than the outside?’ That was one of the concepts from the start.

“There’s a definite Central European flavour to it. It’s a drama and it’s got these great human stories, but it did always require the mechanism of a spy story. The thing we learned after about a year was, ‘This is quite hard, isn’t it?’ because it’s all agents, double agents and triple agents. You really see what amazing plotters the Le Carrés [and other spy novelists] are.”

Produced with ETAMP Film, The Sleepers is the latest Czech series from HBO Europe, following Pustina (Wasteland), which was also directed by Zachariáš, and Agnieszka Holland’s Burning Bush, in which Prague history student Jan Palach sets himself on fire in protest against the Soviet occupation of Czechoslovakia. But The Sleepers has proven to be the toughest production yet, owing to its familiar setting.

“Because the events of Burning Bush take place in 1968, many people do not remember that time anymore,” says Polachova. “But with this set in 1989, people do remember it and they relate to that period of time easier than they do to the 1960s. That’s why it was really important to stay as precise as possible in terms of the historical setting.”

That setting is perhaps more familiar now as a result of the ongoing tensions between Europe, the US and Russia that threaten to spill into a Cold War 2.0. Coupled with the rise of state propaganda and fake news, “something we never thought would be part of our lives again is here,” Polachova continues. “It’s a period piece but it’s actually happening now, and it’s not just a spy drama because it’s not told through a spy’s eyes. We’re following the story of a woman who is a normal citizen and, by accident, she finds herself in a world she doesn’t really understand.”

That woman is Marie, played by Pauhofová, who sees an opportunity to return home to Czechoslovakia and be reunited with her relatives. “Or at least she thinks it’s her home,” the actor tells DQ between takes on set. “When she goes back, she realises it’s not her home anymore. Back then, the difference between the socialist country Czechoslovakia and a country of freedom was big.

“Then her husband disappears, so it’s normal that she is trying to look for answers. And the more questions she asks, the fewer answers she gets. Even if she does get some answers, they only make the whole situation more complicated. But she’s the type of person who doesn’t give up. Maybe that would be best for her, but she doesn’t. The deeper she gets, the more terrible things she finds out.”

The six-part series sees Pauhofová reunite with HBO Europe, having previously appeared in Terapie (the Czech adaptation of Israel’s BeTipul, which also led to HBO US’s In Treatment) and Burning Bush. She says it was a mixture of the story and character that drew her to the series, relishing the chance to play a character who believes she understands the world around her, only for her life to be revealed as an illusion.

“She’s not a spy, she’s a very normal woman. That’s interesting,” says the actor. “When a normal person knows the world and knows how things go and comes into surroundings that are very different and discovers the rules she is used to are not there, the combination of the spy world and socialist rules becomes very dangerous for her. She has to ask herself, ‘Who am I and what am I going to do?’”

Though she grew up watching a spy genre dominated by James Bond, Pauhofová says The Sleepers is a very different story from those involving Ian Fleming’s debonair British agent, while 1989 is recent enough for the actor to remember what life was really like behind the Iron Curtain, meaning she was able to use her own experience in preparation for the role.

Filming in Prague was complicated by the fact Pauhofová was simultaneously performing in a stage play in Bratislava, in neighbouring Slovakia, meaning long commutes between the set and the theatre. What’s more, the part also required her to learn the violin, as Marie plays the instrument during the series. “I’ve never played any musical instrument. I had to look professional but I didn’t have that much time so I tried to do my best,” she says. “It was pretty adventurous – I’ve done two concerts now. So that was the biggest thing I had to prepare for. Otherwise, it was just being on the set and being focused and passionate.”

Matthews says the series, distributed by HBO Europe, will be “classy,” with a look and style that will match other spy series on television. “Everybody loves spies,” he notes. “When we started developing this, it was before [John le Carré adaptations] The Night Manager, before The Little Drummer Girl, and now spies are back so it feels like the right time for this.”