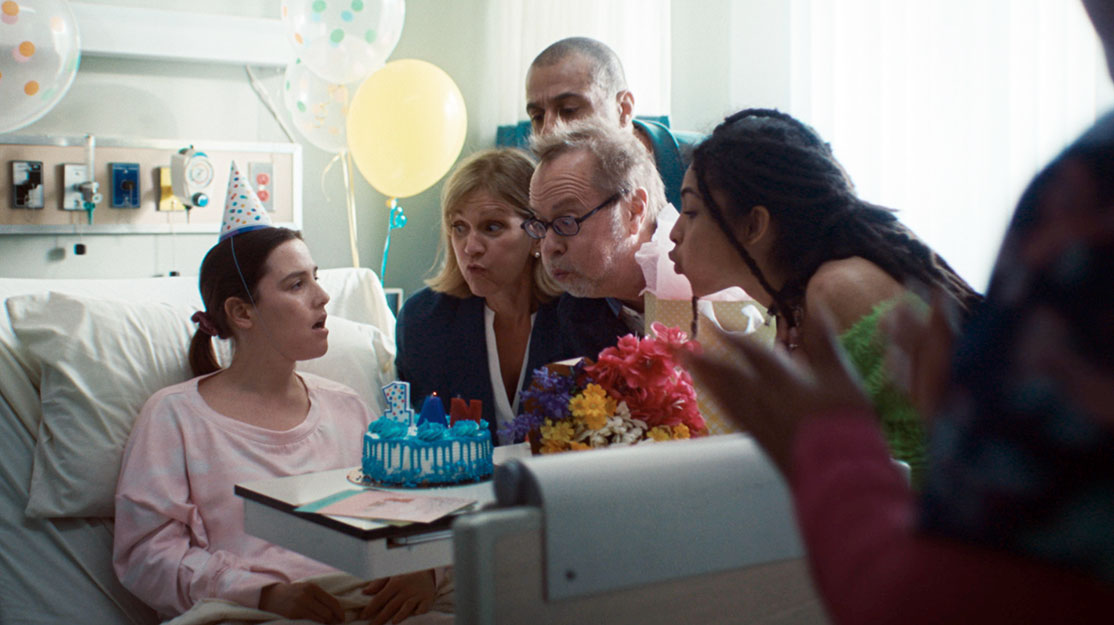 Writers Florence Longpré, Guillaume Lambert and director Guillaume Lonergan discuss their collaboration on Quebecois comedy-drama Audrey est revenue (Audrey’s Back), in which a teenage girl wakes up from a 16-year coma.

Audrey Beaudry is a 17-year-old girl – or at least she thinks she is. In fact, she has just woken up from a 16-year coma, much to the amazement and surprise of her family and the medics who have been treating her.

Now in Audrey est revenue (Audrey’s Back), the title character must gradually rebuild herself as she reconnects with the world around her, long after the world has moved on without her. As for her friends and family, Audrey’s awakening is also a wake-up call that shakes them out of the stasis that has engulfed them ever since the traumatic event that confined her to a hospital bed for so many years.

Lambert, Longpré and director Guillaume Lonergan reveal the origins of the project, why Longpré initially didn’t want to play Audrey and how fantastical elements attempt to explore Audrey’s experience in a coma.

The series emerged from the friendship between writers Guillaume Lambert and Florence Longpré, who had acted together on a sketch show called Like-moi!.

Guillaume Lambert: We are very close friends and I’m a big fan of her work as a writer. I wrote a shortform series called L’Âge Adulte [Adulthood] – seasons two and three were directed by Guillaume Lonergan – which was about a coma. But because of the short format, I couldn’t explore the coma itself. It was just a breaking point in the story itself and I wanted to go further with that team and that’s when we talked about Audrey’s Back, about someone who work up from a very long coma. We didn’t find the title at first and then it was obvious to us – ‘Well, she’s back.’

With no head writer, the writing process was a collaborative partnership between Lambert and Longpré.

Florence Longpré: The writing was very fun but very difficult. We decided there was no head writer, so there was no one to take decisions, and for me that was difficult. Each sentence was discussed, but the best of us came out in that experience.

Lambert: It was really a collaboration. I’m used to working by myself on my own things. Florence has worked with other writers. It was like our universes were fighting to find their place in the process. I think it’s beautiful because I’m a more formal writer, I like to make a puzzle out of the story, whereas Florence is more into emotions and the two of us made this strong and strange baby with two heads.

As part of the research for the series, they spoke to a lot of real-life coma victims and their friends and loved ones.

Longpré: There was a lot of weirdness about being in a coma and some people we spoke to who have experienced being in a coma said they saw animals. That is weird. We wanted to know, ‘Do you remember being in a coma?’ They said no, but they have a strange feeling of it, so it was cool to imagine this sentiment.

Longpré doesn’t like to star in series she has written, but was convinced by Lonergan to take the title role of Audrey, who doesn’t speak more than a handful of words in the entire series.

Longpré: I didn’t want to at first. I have a lot of fear playing in things I write because I have a lot of difficulty leaving the ‘writer’ behind and sometimes I’m very controlling. But I did M’Entends-Tu? [Can You Hear Me?] with Guillaume and I think we understand each other, but it was very difficult. It was the most difficult part I’ve had to play in my career.

Guillaume Lonergan: For me there was no question it was Florence who was going to play her. They asked me if I would be interested to direct this and at that time, I was shooting the last season of Can You Hear Me?, where I had the delight to work with Florence. It was evident to me we were on the same page about how to work and, of course, she cares very much about what she writes, but I like that. I had the same experience directing Guillaume in the series he wrote, and Guillaume would have some moments where he would let go and became just an actor and Florence had the same thing. So for me, Audrey est revenue was the continuity of that. I love Florence as a screenwriter but I also love her as an actress, and I was able to separate the two and say, ‘You have to play this because it’s a role exactly for you.’ It’s totally the opposite of what she had done before, to do a series where the principal character doesn’t speak for such a long time.

A magical, fantastical element of the series arrives in the form of a large bird-like figure, who appears to Audrey in dream sequences relating to her experience in a coma.

Lonergan: It’s something she sees when she’s young and it’s a presence that stays with her throughout her coma. Guillaume and Florence were trying to dramatically and visually express the imagination of what happens in her mind while she is in a coma. It’s not very frequent in Quebec or Canada that we have imaginative or surreal stuff like that, especially in a dramatic comedy like this. To have a part of the series that is so surreal, there’s no precedent. They wrote the script that concerns specifically the birdman, the thing – it has many names – and after that I hired James Lavoie, a costume designer from Cirque du Soleil, who invented the look.

Florence did a drawing for me of what she had in her mind. It was a man in a suit with a long neck and a bird head. I did some research of all representations of birds that are man-like, and also people in the history of humanity who wear masks resembling birds and we did a mix of that and James did drawings and drawings. Then we had this look. There was a real acrobat underneath the suit and we closed a street for a week and filmed all those scenes [featuring the character]. There’s a specific episode, episode six, where it’s all about the relationship between Audrey and that character.

Lambert: The last thing she saw before going into the coma is a bird, after she was hit by a car. She saw small birds and that’s what causes it, and then she develops a relationship with that bird.

Lonergan: Her dreams in the coma with that bird are always in the road where her accident happened. It’s like a no man’s land, like a road that never ends. We had this setting, which was incredible. It was such a delight to do those scenes and something I’m really proud of.

The creative team have been touched by the warm reaction to the series so far in Quebec, where it debuted on streamer Club Illico last year, and when it was screened in competition at French television festival Canneseries earlier this year.

Longpré: We want people just to be moved.

Lonergan: It’s great Florence and Guillaume write screenplays that are funny and dramatic at the same time. The point is to touch people. It’s not calculated but it’s incredible how people are touched by the story and they follow Audrey even though she doesn’t speak. There’s an emotional hook that’s irresistible. People have connected with it and I’m very happy.

Lambert: We are both obsessed with writing characters who are real peple. We’re looking for authenticity and that’s what we try to put on screen. Not characters, just normal people going through an extraordinary journey. That’s what touches the audience the most.