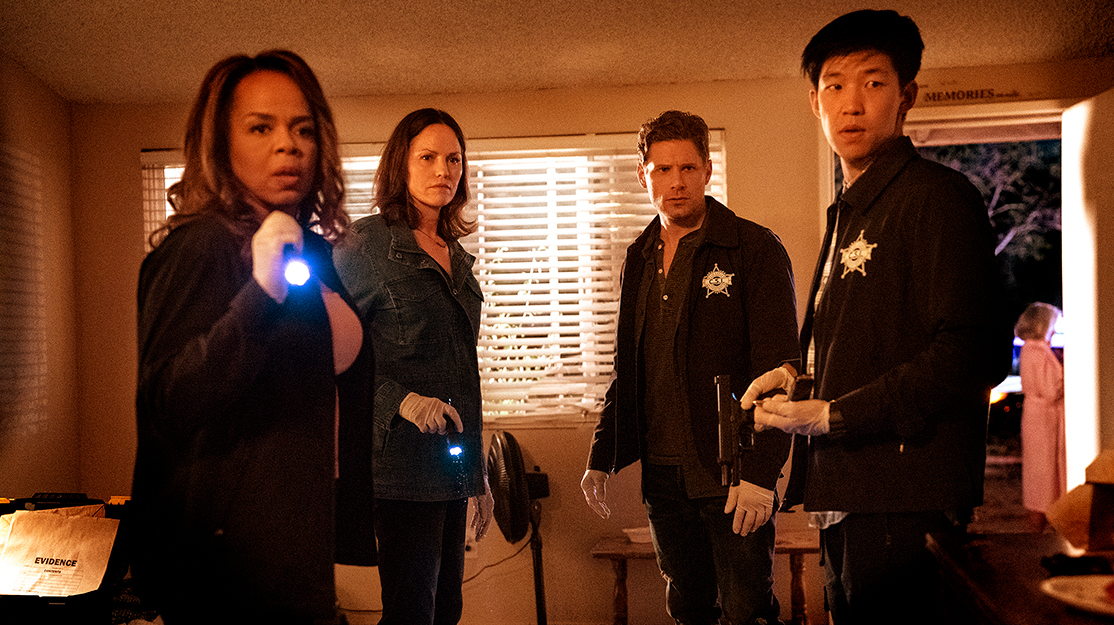 For 15 years, CSI: Crime Scene Investigation was one of the biggest series in the world. Starring an ensemble cast headed by William Petersen and Marg Helgenberger, it introduced a team of crime-scene investigators from the Las Vegas Police Department who used the latest forensic techniques to solve murders in the city.

The success of the series – it ran to more than 300 episodes – led to spin-offs including CSI: Miami, CSI: NY and CSI: Cyber, which put a new spin on the show’s familiar format by focusing on computer-related crimes. It was also a huge hit overseas and was regularly named as the most watched series in the world at the Monte Carlo Television Awards.

Now six years after it ended, US network CBS has resurrected the series with a sequel, CSI: Vegas, that brings the ‘mothership’ back to where it all began – complete with The Who’s song Who Are You once again playing over the title sequence. It introduces a blend of old and new characters who now face an existential threat that could bring down the entire crime lab and release thousands of convicted killers back on to Sin City’s neon-lit streets.

Once upon a time, it had seemed that CSI: Cyber would be the future of the franchise, with a show that mirrored the way real-life crime was moving online. But with its use of digital forensic technology, viewers weren’t captivated in the same way by the show, which would run for only two seasons, between 2014 and 2016.

Writer and producer Jason Tracey then approached series creator Anthony E Zuiker with an ambition to return to the original CSI. They crafted a show that pairs the familiar backdrop of the Las Vegas Strip with a plan to break the rules of traditional story-of-the-week procedural dramas.

As a self-confessed “super fan” of CSI, Tracey was coming out of college, moving to LA and starting to build a career for himself as a writer and producer when the series debuted in 2000 and showed how cinematic television could be, “even in the network sandbox,” he tells DQ. “It was one of the most influential things that brought me to TV writing and to procedural crime writing. I just fell in love with it. I loved the characters, loved the style of storytelling and the quiet moments. That was something fresh and new.”

On the back of scientific advances and the show’s “follow the evidence” ethos in an age of fake news, Tracey believes now is the perfect time to return to CSI. “It’s something we need in our society, in both criminal justice but also just the way that we receive information,” he says. “It’s nice to bang that drum. That’s something the world needs again, because we’re all flooded with information constantly. Human minds are geared toward understanding things through narrative, so it’s nice to tell some stories that recentre that ethos that Anthony created and built the show around.”

Zuiker agrees the return of CSI – produced by CBS Studios in association with Jerry Bruckheimer Television and distributed by ViacomCBS Global Distribution Group – has a lot to do with timing. “If you get off the air in 2015 and then come back on the air in 2017, I’m not sure why you’re coming back. If you get cancelled in 2015 and come back in 2035, I’m not sure why you’re coming back,” he says, noting the plan to bring back CSI to mark last year’s 20th anniversary, before the Covid-19 pandemic delayed proceedings.

“The world has changed significantly in the past five years. Therefore, we can come in and extend the franchise and tell stories in a unique way because the world has reset itself,” he says. “Jason’s done a marvellous job of doing what’s familiar with the iconic format and then putting a spin on it to where it feels really fresh. That’s exciting.”

That fresh spin on the original format includes introducing season-long story arcs and taking viewers home with the characters, with an ambition to update the show for modern audiences.

“It’s a little daunting because if it ain’t broke, don’t fix it, and nothing was ever less broke than CSI. It worked pretty brilliantly,” Tracey admits. “I was loathe to tamper with the formula too much, but there’s a different expectation now with streaming and binge watching and the way that people have come to expect a little bit more a flavour of the home life [of characters]. Honestly, that stuff is fun to write. That’s what drives you as a writer, to embrace your characters and go deeper.”

The longer arc this season involved a threat to the crime lab, and is the inciting incident that brings back fan favourites Gil Grissom (Petersen) and Sara Sidle (Jorja Fox), who were last seen together in season nine before a number of guest appearances. They now join a new team led by Maxine Roby (Paula Newsome).

“We didn’t have to twist arms too hard,” Tracey jokes about bringing Petersen and Fox back into the CSI fold. “They love these characters and they both jumped at the opportunity, but we had to have conversations that made them feel comfortable and excited about a new direction.

“My first instinct was to shake it up and inject some backstory about what we’ve missed. But we’re not telling a story about any shenanigans that went on in the five years since they went off the air. They’re just back, and better than ever.”

Writing CSI: Vegas felt to Tracey like producing a magazine at times, with the writers’ room taking place over Zoom due to Covid and the fact that, for a long time, they weren’t seeing any scripts committed to film. Crafting an episode is a layered process, he says, “because the spine of these stories has to be [as intricate as] a Swiss watch. You’ve got to find your beats and your steps for your character stuff and for your serialised arc. Those are just layered on to each other.”

“The thing about CSI is that anything can start a conversation about an episode,” Zuiker says. “It can be something happens in true crime, a piece of forensics. I sent Jason a micro-crocheted koala bear that I found on Etsy – it’s half as big as my pinky nail – because the second I saw that, I’m like, ‘OK, well, this is interesting because this can be a triple homicide.’ It could be the artefact that leads to a triple homicide home invasion.

“I sat in a jacuzzi on the phone with [show advisor] Daniel Holstein, a real-life Gil Grissom, and we span this tale of a future episode just based on this micro-crocheted koala. Anything can start an idea for a CSI episode. That’s what’s so fascinating about the show. It can start anywhere with anything.”

Tracey and Zuiker are also both buoyed by the fact that the huge demand and interest in crime dramas in general, and true crime in particular, are making audiences more attuned to police procedures, which has pushed them to make CSI: Vegas more detailed that ever before.

“If the audience wasn’t sophisticated, then we couldn’t tell more sophisticated stories,” Tracey notes. “It’s a great privilege to write for an audience that’s getting smarter by the day. They just hoover up all of this information, whether it’s through a podcast or other series they’ve watched or the book they’re reading about true crime. One of the things I love about this series is it will take your hand and guide you through something you might not have known about forensics, but it’s not going to pander.”

The backdrop of Las Vegas also gives the creative team plenty of range in terms of the places the show’s stories can be set, with locations including a swingers’ club, a video gaming tournament and a lūʻau at a Hawaiian-themed hotel. Filming actually takes place in LA, with the crew undertaking several trips to the real Vegas to collect establishing shots of the city’s iconic sights.

“It’s just such an amazing grab bag and it’s the world’s playground,” says Tracey. “It’s a candy store for a storyteller. You can’t throw a rock without hitting a different weird fun subculture to dive into. And it gives you a look. [Director] Uta Briesewitz and [cinematographer] Tom Yatsko came in and did that first episode and set a great look. There’s the neon, there’s the bright lights, and then you get out to the desert and you have the Cormac McCarthy dust-scape. Because it’s such a diverse place and because our cast is diverse and our storytelling is diverse, we don’t get bored.”

It’s the show’s blend of the fresh and the familiar that Tracey thinks will entice the audience back to CSI, particularly with cast members Newsome, Matt Lauria (Josh Folsom), Mandeep Dhillon (Allie Fajan) and Mel Rodriguez (Hugo Ramirez) joining the lab team.

“To have the privilege to develop this thing with Anthony and get to inject some new blood into it is a lot of fun,” he says. “I really fell in love writing those characters. The minute the actors started bringing it to life, it got even more exciting. I love the stories we told. I like the twists. But when you live with these characters day in, day out, that was probably the most exciting thing.”

“It’s funny because I don’t have grandchildren, but I feel like a grandfather on this particular show,” Zuiker adds. “Because I’m not working on it every single day for 15 seasons, now I can sit back and it’s fun to get like an outline or a script or watch a cut or visit the set. Now I can finally enjoy CSI because when you’re in it, it’s like you’re just dodging arrows every single day. It’s been great to sit back and really watch the show grow.”

As for whether the launch of CSI: Vegas – which debuts in the US tomorrow – will be the start of a new franchise with more spin-offs, “it’s never too soon to talk about that,” Zuiker jokes. “There’ll always be room for CSI on the airwaves. It really is a show about justice for victims. That’s a universal theme that does not get old.”