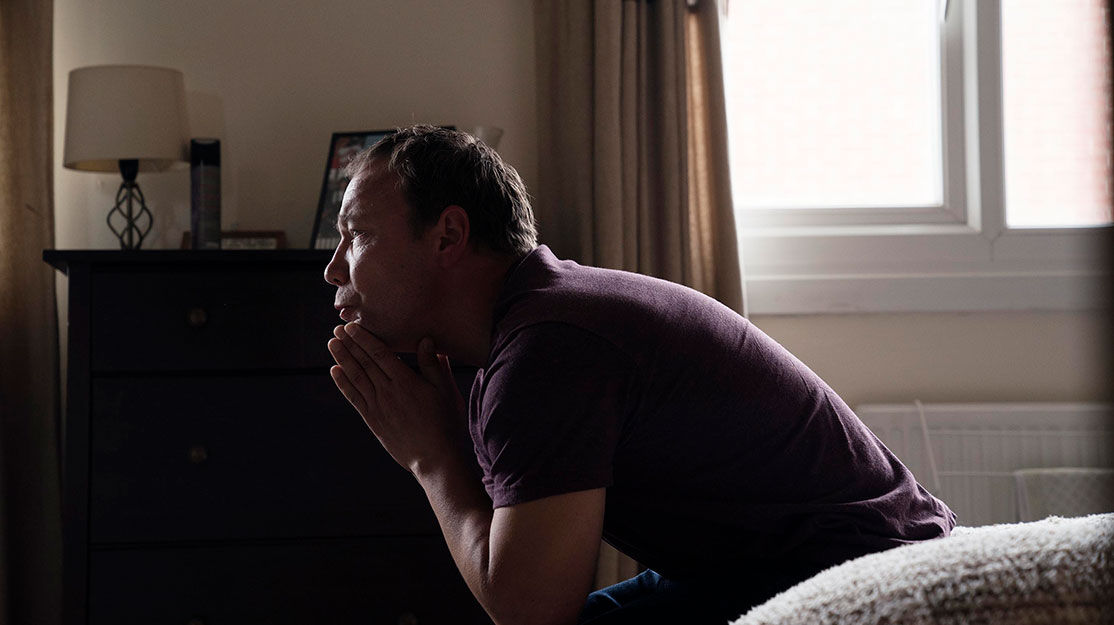 From Shane Meadows, the writer and director behind This is England, The Virtues is a powerful and affecting miniseries touching on themes of child abuse, alcoholism, revenge and redemption.

Stephen Graham stars as Joseph, a recovering alcoholic who falls off the wagon when his ex-partner moves to Australia with their young son. He then boards a ferry to Ireland to confront the truth about his childhood in the care system and reunite with his long-lost sister Anna (Helen Behan).

As part of Bafta Television: The Sessions, Graham, Behan, Meadows and the team behind the series discussed Meadows’ inspiration for The Virtues, the development of the characters, the importance of telling working-class stories, and how Behan’s chance meeting with Meadows in a pub kickstarted her career.

Graham is nominated for Best Leading Actor, Behan is up for Best Supporting Actress and The Virtues is in the race for Best Miniseries at the Bafta Television Awards this Friday. Earlier this month, Meadows and The Virtues co-writer Jack Thorne were nominated in the drama director and writer categories, respectively, at the Bafta Television Craft Awards for their work on the show. The duo previously collaborated on This is England ’86, ’88 and ’90, a trilogy of drama miniseries for Channel 4 based on Meadows’ film This is England.

Shane Meadows had the initial idea for The Virtues two-and-a-half years ago and sought out Jack Thorne to discuss the story…
Meadows: Most of my stuff has an autobiographical element to it, but this was beyond that. Jack was my first port of call as a human being and a writer, to see whether he thought I was right to try to make something with the idea.
I was starting to flesh out a very rough idea based around the Joseph character. I can’t remember whether it was even called The Virtues at that stage. I don’t think we would have known whether it was a film or a series, but [I had] the germ of an idea of somebody who finds something out very late in their life that they’d forgotten had happened to them –  an incident of sexual abuse.
I had the basic framework but, like anything I’ve made, the writing, the improvisation, even on set in the edit, even during the grade, it’s always this kind of refining process.

Filming The Virtues was informed by a scene in This is England ’90…
Meadows: There was a big turning point in This is England ’90 when we were doing the reveal scene, where Lol [played by Vicky McClure] sits everyone down at the dinner table and basically tells them she was the one who killed her dad, and it wasn’t Combo [Stephen Graham].
What I’d learned over the years is that very few takes resemble other takes. [This was] one of those scenes where you sometimes get these guttural responses from actors, and sometimes it’s a wonderful bargaining chip. If that actor knows you’re asking them to go somewhere incredibly deep, there can be some reticence, because you could be asking them to go there 15 times – and no human being on Earth can go into that place 15 times in a row.
We decided it needed to be shot like a piece of theatre, because if it does happen in one take and we’ve got all of these cameras all higgledy-piggledy set up all over the place, we could shoot the entire series like that.
It’s quite a technical achievement, but that really inspired the whole of The Virtues. It needed to be shot so the actors knew that, if we laid something down in one take, we’d got a wide [shot], two mids and a close-up and could go, ‘That scene’s done.’ It might take a bit longer to set things up, but everyone knew when you shouted action that, if you had to go somewhere you were scared to go, you weren’t going to have to do it 58 times afterwards.

As an actor, if Shane Meadows calls, you go…
Stephen Graham: It was either Mark [Herbert, producer] or Shane, it was a conversation on a Friday night at about five or six o clock. They were like ‘Can you get to Sheffield?’ and I was like, ‘Yeah, of course.’ Obviously I’m not calling myself Batman but if Shane phones, you go.
Working as an actor with Jack and Shane’s writing, it’s the most liberating, frightening, exciting, beautiful experience I’ve ever had the pleasure to have. It is all written beautifully, there are beautiful scenes, there’s beautiful stuff within these pages that you absorb. Your job as an actor is to learn these lines, but you know that, with Shane, it doesn’t necessarily have to go that way. What happens is you read them and subconsciously these words that people speak go into your head. I’m doing a lot of work in creating a character along with Shane, where Jack and Shane have done a lot of work creating the language of a character, which feeds in, and there’s a beautiful marriage that happens.

Meadows met Helen Behan, who was then a nurse, in a pub while he was on holiday in Bettystown, Ireland…
Meadows: Everyone mentioned Helen – ‘You’ve got to meet Helen’ – and I was kind of like, ‘Who is this Helen?’ She came in and it was a mental night because there was a guy who pinched about 15 ladies’ purses and was hiding them all in the cistern. It was a night for the ages.
I met her at the bar, and I was like, ‘Your reputation precedes you, madam,’ and we had a great chat. Me and Jack were writing a scene for This is England ’88 maybe a year later, and I thought, ‘What if Lol goes to see a district nurse to talk about how unwell she’s feeling?’ And I thought, ‘God, I feel like I know a nurse who’s an actress.’ Helen had told me she was a nurse – that was good enough for me. I told the team and, when we were writing, they rang Helen.

Helen Behan: It was a mental night. It’s such a small village, and superstar directors don’t often walk in the door of your local, so I saw a chance and I took it.
When eventually they did call [about This is England ’88], I was leaping up and down and screaming, then coming back [to the phone] and going, ‘Yes, that sounds very nice.’ Because of people like Shane, some working-class people will have a shot because you’re seen and you’re heard by people like him. [Meeting Meadows] was the turning point in my life.

Meadows is keen to champion new and underrepresented talent…
Meadows: In lockdown, I’ve worked with a few groups [focusing on getting underrepresented talent into work], and Bafta Elevate most recently, and it blew my mind how much talent is out there from places people don’t normally associate it coming from.
Whether it be that they might not have a classical education or that they’re just from a background that’s severely underrepresented, they just never really get that chance. Things are definitely, definitely looking brighter on that front.

Working class stories need to be told…
Graham: We need to find the writers who can tell these stories. The likes of Jack, Shane, Nickie [Sault, producer] and Mark are trying to help those people get those opportunities. What I love about Shane and Jack’s writing is there’s so much humour as well – because we’re not all miserable bastards!

Graham is happy to be known for playing difficult characters…
Graham: I’m never going to be Mr Darcy, do you know what I mean? For me, it’s just about trying to play those parts and being a part of the stories I used to watch as a kid that made me want to be an actor in the first place – all those great dramas I was brought up watching on telly.
Fortunately enough, the stuff I choose is very social, has a message and it’s kind of political. For me, it’s always been about the truth of the story and the humanity of the character. I find them really interesting to play.

But Joseph in The Virtues is a character particularly full of pain…
Behan: Nobody sits with pain as much as Joseph does. Pain demands to be felt, and it’s that examination of the human condition which we all have or will have in our lives. That’s why people connect with it, that’s why it’s so important, that’s why it’s such an amazing programme.
I love working but nothing will come close to that job, it’s been amazing. It’s a happy day at work, it’s a sad day, you’re crunched up, you’re laughing, you’re crying and it’s been one of the best [jobs] of my life.