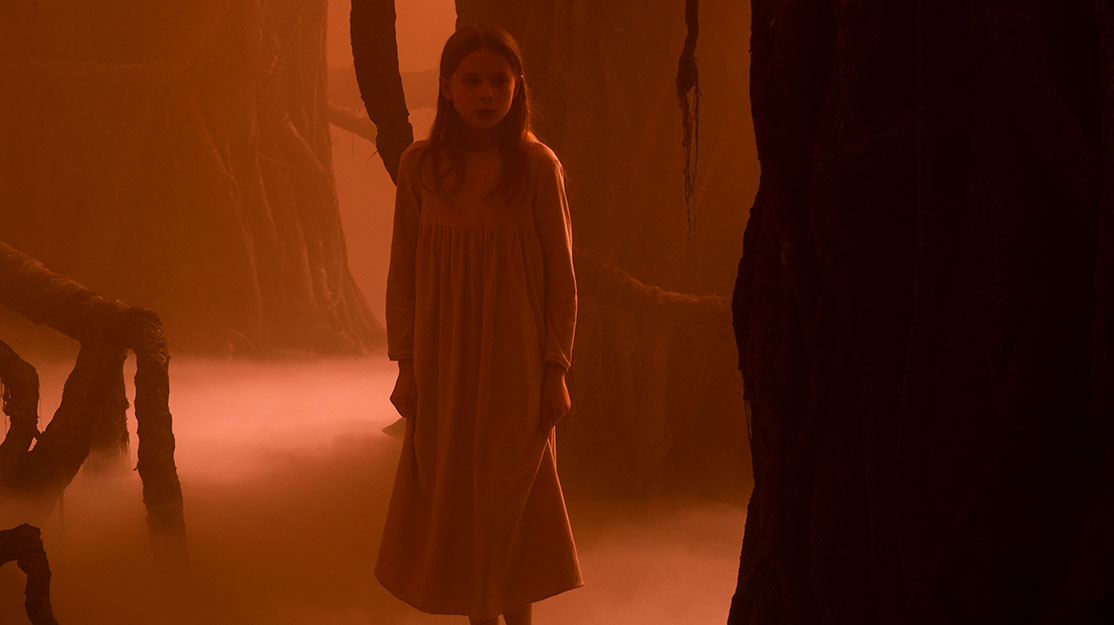 For more than a decade, Denmark has been known as a powerhouse of international television drama. So it’s surprising to note that the launch of supernatural thriller Equinox marks only the second original Danish drama – following The Rain in 2018 – to arrive on global streaming giant Netflix.

Before leaving the network in 2017, they were among the producers behind international hits including Forbrydelsen (The Killing), Bron/Broen (The Bridge), Liberty, Herrens Veje (Ride Upon the Storm), Arvingerne (The Legacy) and Bedrag (Follow the Money).

Equinox, which debuted on Netflix on December 30, follows a young woman named Astrid, who was nine years old when a class of students from her school – including her sister – inexplicably disappeared in 1999, leaving her traumatised and plagued by horrific visions.

Twenty-one years later, in 2020, Astrid is the host of a late-night radio show. When one of the three survivors from 1999 contacts her through the show and then dies in mysterious circumstances, Astrid becomes determined to find out what happened to her sister and the rest of the class, only to discover a dark and unsettling truth that involves her in ways she never imagined.

The six-part series is based on the acclaimed podcast Equinox 1985 by Tea Lindeburg, who has also created and written the story for the screen. Bernth is the executive producer, Dorthe Riis Lauridsen (The Cavalry) is the producer and Søren Balle (Follow the Money, The Rain) directed the first four episodes.

Here, Lindeburg tells DQ about working with Netflix to adapt her podcast, her writing process and why she hopes the show will continue the success of Danish drama on the world stage.

What were the origins of the podcast?
Every year in June, the streets of Copenhagen flood with trucks filled with high-school graduates who, for a day, drive around to all of their fellow classmates’ homes and are served alcohol and food by the parents.
This tradition has existed in Denmark for more than 100 years and it has always fascinated me. It’s a modern rite of passage; it’s the moment when you stand with all the possibilities in front of you and your childhood behind you. It’s your first taste of freedom and the moment you take the leap into adulthood. What do you want to do? Where do you want to go? What do you want to be? What do you want out of life?
I thought, ‘What if your life was to end here? If you never got to the other side. If your life ended just before it was about to begin.’ And so came the podcast.

What were the steps that led Netflix and Apple Tree Productions to partner with you on an adaptation?
After the podcast was released on DR, it turned out to be quite a success. I reached out to Piv Bernth, who at that time had just left DR as head of drama and started her own company, Apple Tree, and proposed to her that we make it into a TV show.
Being the genre it is, it simply did not have a platform within the local Danish market, so Piv took it to Netflix. After a few months of pitching to Tesha Crawford and Mia Sohlman at Netflix, I was lucky enough that they saw the potential and the nerve of the show and wanted to commission it.

Did the story naturally lend itself to television? What were your initial thoughts about adapting it?
When I first came up with the idea for Equinox, it was actually as a TV show, but I was also well aware this could never be produced just for the Danish market. I have always been obsessed with sound, and was at that time listening to a lot of different podcasts, so I saw it as a challenge, never having done radio before, to convey this story only in sound. To me, radio is a very visual art form, the main difference from TV being it is the listeners who create their own images.
The podcast has a documentary/autobiographical form, with me acting as the main character named Tea Lindeburg, telling the story of how a girl from my childhood street disappeared with her class back in 1985, which led many listeners to question whether this really happened.
Initially, I played with the thought that the TV show should have the same kind of documentary form. But as I started writing, it didn’t want to go that way. There’s a question of reality in the podcast – what is real, whose reality is more true, is it all in the eye of the beholder? I went with that as the main theme instead.

How was the series developed with Netflix?
As soon as Netflix came on board, Mia Sohlman, my creative producer, was very involved. She was a partner. She was as invested as I was in making this great. The best thing for the creative is once Netflix greenlights a project, there are no steps along the way where they might cancel it. It gives an immense security and creative freedom. It gave me room to work and trust the story and my ideas and to experiment.
I felt they understood me, the show and what I wanted to tell. They respected my ideas and my tone and were always focused on Equinox developing true to my vision, but didn’t hold back on challenging me either. I feel very lucky to have partnered with them.

Who are the main characters and how do we follow them through the story?
Astrid is the main character. She is a woman in her mid-30 who, as a child, lost her older sister Ida in an inexplicable tragedy. When the past comes knocking on her door, she can no longer leave the mystery be and dives back into the past to find out what happened that night in 1999. There must be an explanation. No one just disappears.
We also follow nine-year-old Astrid in 1999 during the months following Ida’s disappearance. She starts having nightmares and a sense that she can bring back her sister. Lastly, we follow Ida and her friends in 1999 during the three months leading up to their disappearance.

What are the challenges of adapting a podcast for television?
For the podcast, I was working with a voiceover that reflected the discoveries the main character made and also reflected on her past – something I didn’t see working in the TV show. How could I provide these reflections without a voiceover? The solution was to make those stories separate layers, and that’s how the layers of Astrid as a child and as a teenager came about.
Another challenge was transferring audio to images, especially since the visuals in my head probably weren’t the same as those imagined by the listeners. What was most important to me was hitting the tone of the podcast – the same eerie, secrets-around-the-corner tone. That was my way to stay true to the podcast.

How would you describe the writing process?
It went very fast! From greenlight to the finished show, there was only (before Covid-19 hit) supposed to be about a year. I had to work fast. And even though I knew the story, everything had to be re-thought. The writers room was set up in two weeks and then we just ran a marathon. But I loved every second of it and learned a lot.

What is the visual style of the series?
We knew early on that we wanted more colours and textures than the typical noir dramas that have come from Denmark over the past few years. We worked with a luring feel, like something is always waiting around the corner: shadows, secrets, reflections and the ‘other reality’ about to jump at you.
Then, working with the different time periods (2020 and 1999), we made a decision not to distinguish between them visually. We wanted the times to float together, like a circular movement, both existing at the same time. The past becomes the present and the present becomes the past.

What does Danica Curcic bring to the lead role of Astrid?
Danica is a unique actress. She is very involved, very prepared and very invested. She gave Astrid a great darkness and sorrow, and a feeling of something hidden inside her that is about to burst. She vibrates. Is Astrid crazy or is she the only one who sees the truth? Danica’s Astrid balances that perfectly.

How was your experience filming the series and being on set?
I worked very closely with lead director Søren Balle and felt he completely understood my intentions. He engages with the actors in an admirable way. It was almost magical and sometimes even felt like an out-of-body experience to see how you write something and then, all of a sudden, there would be so many people working so hard to visualise your words. Did I really write that there was a waving cat? Yes, and there is. I felt truly blessed by all the people who gave so much to make Equinox what it became.

Where was Equinox filmed and how are locations used?
We shot all of the series in Denmark and most of it in the larger area of Copenhagen. We had one episode where we were supposed to go to Marrakesh, but unfortunately we had to change and rewrite that part because of Covid.
The locations play a big part in the show. They are all versions of my own childhood locations. Astrid’s childhood home is a character. It has secrets and dark corners; it has its own journey.
The same goes for the high school, the amusement park and the island. Nothing is random.

What were the biggest challenges in making the series?
Everything went quite smoothly until Covid-19 hit, so I would have to say Covid-19. We were in the middle of shooting episodes five and six when everything closed down. So not only did the season change in the middle of an episode, but there were so many scenes I had to rethink and rewrite for those episodes because we had too many extras in them (like a graduation ceremony, for example), because we had too many older actors interacting with younger actors or because we couldn’t travel. Covid-19 was the biggest challenge for sure.

How do you think the show will be received by fans of the podcast?
I hope they will like it! I hope they will see the similarities to the podcast but also welcome the changes and appreciate the choices we’ve made to bring it to TV. I hope they will feel like they get more – more of the same, if that makes sense. I especially am curious about how they will receive the expansion of the spiritual layer.

Danish drama has become a worldwide phenomenon. Why do you think Equinox will appeal to an international audience?
That’s a hard question and I don’t know for certain that it will! But I hope it will. When I write a story, I have no answers, just questions. It’s about taking an idea and opening it up.
This idea was an image in my head of an empty school bus on the road. Then I dove into it and, like yarn tangled up in a knot, I just kept pulling until it unravelled. I can only write something I am curious and excited about, and then I hope others will feel the same. But you just never know.