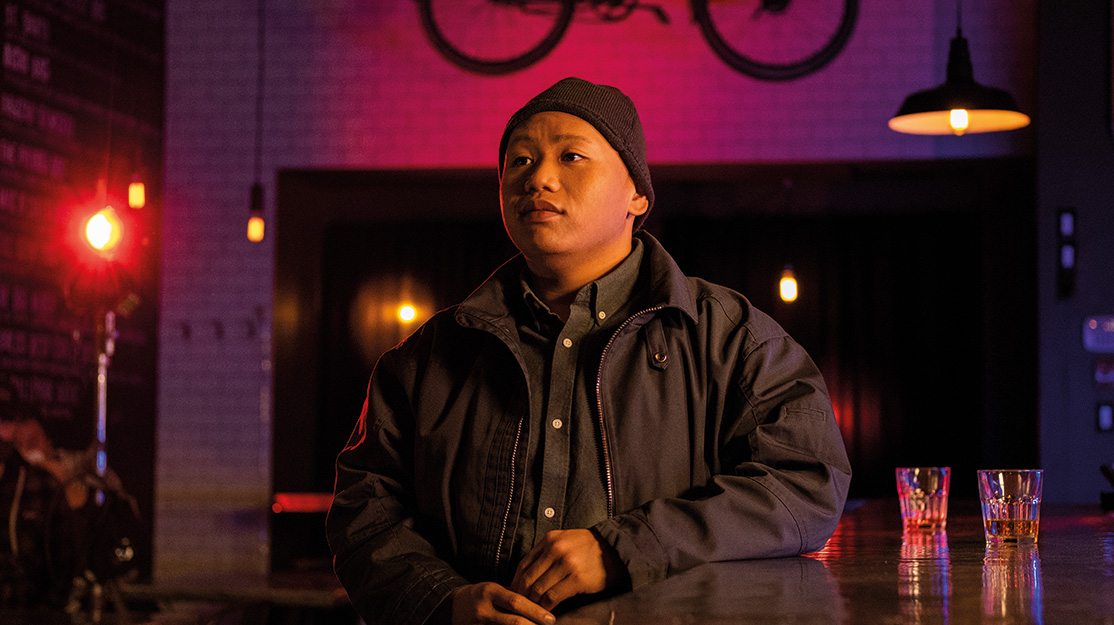 Spider-Man’s ‘Guy in the Chair’ Jacob Batalon is standing up for his first lead role in a TV series with supernatural drama Reginald the Vampire. He tells DQ about getting his teeth into the production both on screen and behind the scenes.

For the last five years, US actor Jacob Batalon has established himself as a global star after landing a role in the Marvel Cinematic Universe (MCU). As Ned Leeds, Peter Parker’s best friend, he has appeared alongside Tom Holland and Zendaya in Spider-Man: Homecoming, Spider-Man: Far From Home and last year’s entry Spider-Man: No Way Home, which has become the sixth highest-grossing movie of all time.

Since joining the MCU, Batalon has also made cameo appearances in other blockbuster titles including Avengers: Infinity War and Avengers: End Game.

But now he’s stepping up to lead a series of his own. In Reginald the Vampire, based on Johnny B Truant’s Fat Vampire novels, Batalon brings his charisma and sense of humour to the titular character in a show that aims to upturn familiar tropes within the supernatural genre.

“It has all the of makings of a really amazing show – and I’m not trying to be biased or anything because I’m Reginald,” Batalon tells DQ. “It’s about this normal guy who becomes a vampire, and he’s dealing with a lot of very human things and also dealing with the vampire community, which is very vain and which only likes beautiful, fit people and not normal, regular, thoughtful, amazing people. He’s the hero – he wins and he gets the girl in the end, but also a lot of bad things happen to him, so we’ll see what happens.”

For much of the past year, Batalon has been touring the world to promote No Way Home, which was released on the big screen in December and completes the MCU Spider-Man trilogy starring Holland as the comic book webslinger. While no further instalments have yet been confirmed, the actor marvels at the fact the third film was able to be completed at all, with filming taking place during the Covid-19 pandemic before a vaccine was available.

“We were just very lucky to have done so,” he says. “My life, you know, it’s been nice. It’s been really fun, but I don’t really focus too much on fame. I’m not really looking for it. I’m really thankful for the success, and it’s put me in the position to do Reginald the Vampire.

“The last year, my life has been absolutely crazy, especially doing the show, because the show has been taking the majority of the last five months of my life. I’ve put a lot of myself into it – my blood, sweat and tears, all real, by the way, and also fake blood, which gets everywhere. But it’s been great. It’s been really amazing for sure.”

Coming out of the MCU, it’s unlikely Batalon would have been short of offers to continue acting, either on the big or small screen. But in terms of what he wanted from his next role, “truly I was looking for things that just intrigued me, things that I found to be different and not something that’s a reiteration of anything,” he says. He found all of this in Reginald the Vampire, which he says was unlike anything he’d read before.

The series introduces Reginald, a newly turned vampire who crashes into a world populated by beautiful, fit and vain bloodsuckers. Across 10 episodes, he will go face-to-face with a bully boss, fall for a human girl he can’t have and meet a vampire chieftain who wants him dead, while discovering a few powers of his own.

Commissioned by US cable channel Syfy, the show is produced by Great Pacific Media, Modern Story, December Films and Cineflix Studios. Hulu will have second-window US rights, while Prime Video will carry the series in Canada, Australia and New Zealand following deals with distributor Cineflix Rights.

Batalon read showrunner Harley Peyton (Twin Peaks)’s first two scripts and was impressed by the “funny, relatable story.” Reginald “is very much an everyday person. He’s not like the romance novels suggest,” he says. “He’s not like the prototypical leading man that Hollywood tries to portray. He’s very much an everyday person, and we need to embrace the idea that not everyone has to look a certain way to be the hero of the story.”

At the start of the series, Reginald isn’t a vampire at all. “He’s just very normal,” says Batalon, who describes his character as a “thoughtful and neurotic person. He’s dealt with being a person who’s not seen as societally beautiful his whole life. He’s dealt with the sort of judgements that come with that, unrequited love and bullies who don’t really understand him, but he doesn’t let that deter him. He just accepts his fate.”

Then when he does become a vampire, Reginald gets a new life through death as he struggles to come to terms with his fate as the newest member of the undead and everything that comes with it.

“He doesn’t manage it well at all. The entire show is an exploration of how he doesn’t do that well, not even a little bit,” Batalon says. “And even when he does get a grip on it, he immediately fumbles the bag, which is a very human sort of thing to do. It’s about finding yourself.”

Joining Batalon on screen is a cast that includes Mandela Van Peebles (Mayor of Kingstown) as Maurice, who becomes a vampire coach to Reginald, and Em Haine (Fargo) as Sarah, Reginald’s human co-worker at the Slushy Shack.

“Maurice is my sire. He turns me into a vampire and he reluctantly becomes my mentor,” Batalon says. “As all random friendships happen, you start off kind of distant but, as the show goes on, we start to have a bond that’s inseparable.

“Sarah starts out as Reginald’s co-worker, and I feel like there’s a lot of unrequited love there [on Reginald’s part]. That’s a very interesting storyline. It becomes an amazing, sweet romance. Reginald fumbles the bag quite a bit with that.”

The actor praises both his co-stars and the writing for bringing together a myriad of genres and tones – from comedy and drama to romcom and coming-of-age story. It’s why he feels the show will have universal appeal. “And that’s a really important thing for us,” he adds. “We want everyone to enjoy the show because we made it for everyone.” 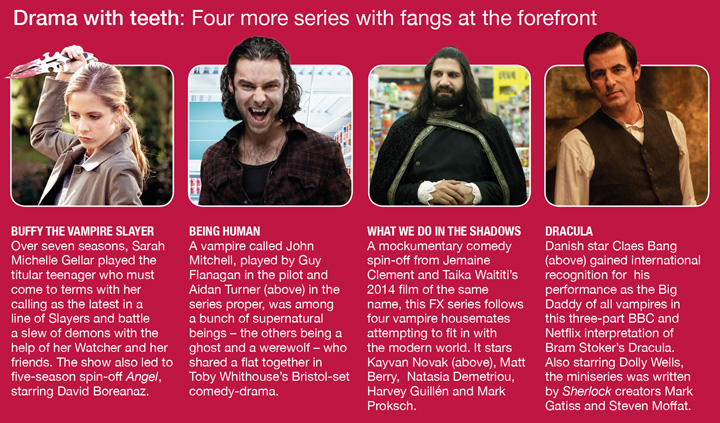 On set, Batalon had to adjust to the rigours of television production. Making a film, “there’s a lot of waiting involved,” with up to two pages of the script being captured each day. On Reginald the Vampire, he would film 10 or 11 pages per day.

“The main difference for me was being in every single day. I got to work with everyone and everyone had a different flavour,” he says. “It was amazing, but the preparation needed for me to come in and spew monologue after monologue, that was a whole Shakespearean thing, for sure.”

As number one on the call sheet, Batalon channelled the lessons he had learned from his big-screen experience, where his main takeaway was that the most successful people are the most relatable, helpful and easy to work with. “I really wanted to create a culture where people could feel safe. I didn’t want people to feel like I hated them or judged them or anything like that,” he says. “I wanted them to feel accepted, heard and understood.”

“They all very much believed in me in that they trusted my opinion and my vision. That made me feel really confident,” the actor says. “It was interesting to play both sides. You learn a lot about the business aspect and showrunning. As actors, we don’t really think about that stuff. It was like a whole new world of insight. In turn, it taught me a lot about being an actor as well. I was very enlightened.”

The main challenge the production faced was ensuring the safety of cast and crew amid the pandemic. “We had a few setbacks here and there, but thankfully we were able to finish and we were just really grateful to actually work in a time when not a lot of people could,” Batalon says. “We were able to make the best of it because that’s all you can do. Other than that, it was an amazing time.”

While TV and film alike are littered with vampires, Batalon believes Reginald stands out quite simply because of his appearance. “He doesn’t look like them. Reginald is the ‘anti’ version of what that is, and he turns the tropes on their head,” he says.

“That’s important because, with our show, we play on the idea that vampires only care about vain, vapid things, and Reginald is the complete opposite. He’s thoughtful and insightful, and he’s very much a deep person as opposed to just a beautiful being. What people will love the most about the show is that no one is taking themselves too seriously. There are big, bad vampires, for sure, but we’re not brooding in every scene.”

And with modern television characterised by numerous channels and an ever-increasing selection of streaming platforms, Batalon is confident that a “quirky sci-fi dramedy” such as this can find an audience, whether that’s in the US or around the world.

“There’s nothing really like it out there,” he says. “I’ve been around the world and it’s something no one has ever really seen. I know for a fact that people will love it. I don’t want to bank my entire career on it, but it’s just such a great show that I know people will find it funny and relatable and will find the storylines interesting and the characters so dynamic.”

Having gained experience in a producing role, Batalon now has plans to work more behind the camera in addition to his acting career, where he is open to a new season of Reginald the Vampire and other opportunities that may come his way.

“I’ve read a lot of scripts where it’s all very interesting, but it really needs to be something that speaks to me,” he says. “I’ll do anything that is just wild and zany.”