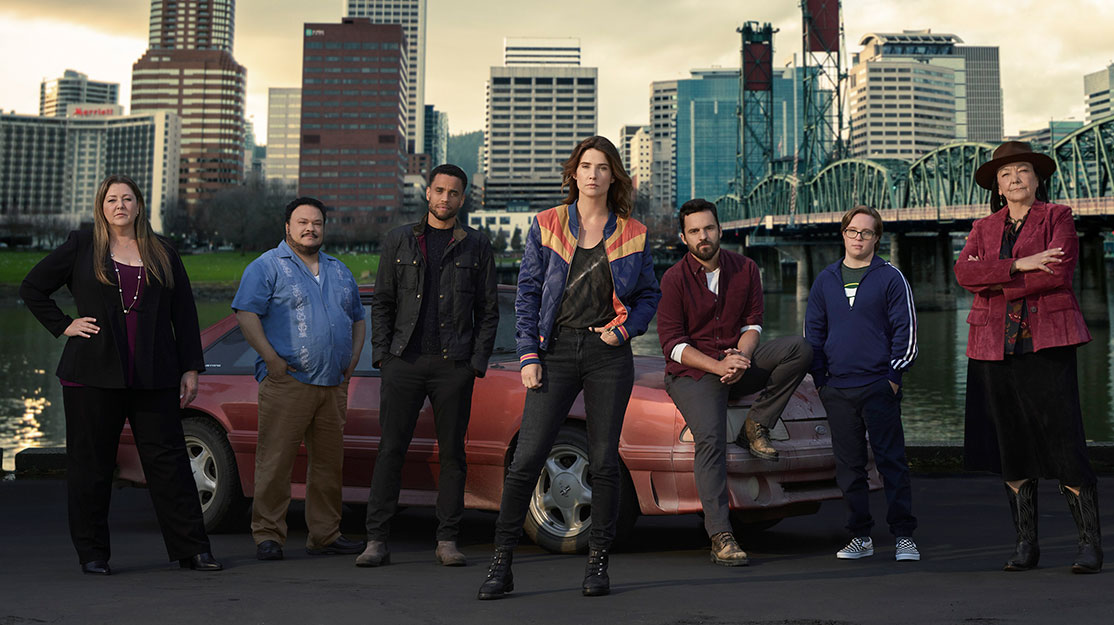 Stumptown showrunner Jason Richman takes DQ inside the making of the ABC series, recalling how the original graphic novel was adapted for television and revealing how Marvel star Cobie Smulders was cast as lead character Dex Parios.

While Cobie Smulders is used to surrounding herself with superheroes as SHIELD agent Maria Hill in the Marvel Cinematic Universe, her latest TV character isn’t quite so exceptional.

But that’s what makes Dex Parios, the central character of US drama Stumptown, all the more appealing, according to showrunner Jason Richman.

Dex is a former army veteran turned private investigator whose brash style and disregard for the rules lead her into trouble. Struggling with PTSD after an explosion killed her childhood sweetheart in Afghanistan, burdened by heavy gambling debts and dealing with the responsibility of taking care of her younger brother, Dex teams up with her friend and ex-felon Grey (Jake Johnson) to take on cases the police are unwilling to pursue in Portland, Oregon.

Season one of the series, which is based on a graphic novel, ran for 18 episodes in the US on the ABC network, narrowly crossing the finishing line before productions were suspended across the country as a result of the coronavirus pandemic. Produced by ABC Studios, it is set to debut on UKTV network Alibi this Wednesday following a deal with distributor Disney Media Distribution.

Richman, who has previously worked on shows such as Mercy Street and Detroit 1-8-7, says the series is a “breath of fresh air” when it comes to US crime dramas, thanks to its female central character and Dex’s relationship with Grey.

“What’s different about this show is deceptively simple,” he tells DQ from his home in LA. “Most of these shows, they’re always centred on a man and the woman’s got all the brains and he gets all the credit, or it’s a conceptual spin on a partnership like that.

“What’s really great about this character, and what I kind of gravitated to, was Dex doesn’t realise she’s good at what she does and feels like a bit of a fraud at first, waiting to be found out. It might be the only thing she’s qualified to do at the end of the day. So in that way, there’s just a lot of deceptively simple attributes to the show that have not been expressed in American detective television.”

Richman hadn’t heard of the Stumptown graphic novel, published in 2009 and named after the nickname given to Portland, until a fellow producer sent it to him. By page three, he was grabbed by the story and, in particular, the character of Dex.

“She just challenged me in so many interesting ways. And even the raw, naked humanity of the character, I found very interesting,” he explains. “She didn’t have a superpower. As a matter of fact, she made so many mistakes but always seemed to fail forward. And that became the premise of the character. I added some characters, I added some attributes to her world and blew it up a little bit [for television]. It wasn’t really set up to be a TV show as a graphic novel, but it was a great jumping-off point.

“The graphic novels had a bunch of different cases; they weren’t really set up to work for a TV hour like we were going to do them. That element had to be worked on a little bit. I made some of the relationships stronger, I changed gender for some of the characters, but I tried to hold on to as much as I could in reverence to the work and also because there are good-quality, really interesting characters there. I’m very gratified that Greg Rucka, who co-created the graphic novel, was so pleased with the outcome, which is always nice to hear.”

Central to the success of the show has been Marvel and How I Met Your Mother star Smulders in the lead role as Dex, a character struggling with the trauma of her past but  often displaying a funny side too.

“It became very clear, almost instantaneously, that she’s just the perfect person to play this part. You rarely experience this. She just elevated everything, took it off the page and brought her own spin to it. She has just great instincts, and the character has become as much as hers as it is mine.

“And because Cobie is very funny, very creative and very inventive, and has a keen awareness of where the boundaries of this character are, she can come to me and say, ‘This isn’t feeling right’ or, ‘I’d like to do this.’ We have a discussion about it, then we often come to a solution, and this has been a really great evolution between us.”

In the writers room, Richman started by creating Dex’s character trajectory through the series, building an arc for her that spoke to her PTSD experience. At the beginning of the series, he describes her as “lost” and directionless, with the unique relationship between Dex and her brother being her only tie to any sense of a normal life.

“Then I wanted her to fall ass-backwards into this line of work,” he says of her becoming a PI. “I thought it would be much more interesting if she did something she was never planning on doing – something that she just got pushed into reluctantly. If she had her way, she wouldn’t do it at all.

“Then, over the course of the season, what she would find is that she’s actually good at it, despite her reluctance and despite herself. The whole thing gave her a sense of meaning and purpose. That’s where we starte,d and we just drew a roadmap from the beginning to the end of season one.”

Episodic cases she takes on are further used as a backdoor to explaining one element of Dex’s character, which evolved as writing on the first season progressed. “That’s the great Darwinian process of television that’s really fun,” Richman adds. “When you’re making it, you’re seeing what’s working and you’re always building upon the things that are working. It helps you tell the version of the story that’s most creatively satisfying to you, and you only discover that along the way.”

Fans of comedy sketch show Portlandia – which starred Fred Armisen and Carrie Brownstein and ran for eight seasons – will recognise several locations and the type of quirky, off-beat characters that populated the IFC series. Stumptown also aims to tap into the unique sensibilities of the city, with part of the pilot shot there and in Vancouver. The rest of the drama was then largely shot in LA, aside from some establishing and exterior scenes.

“It’s a little off-centre. It’s a really interesting place,” Richman says. “Portlanders are very serious about certain things. You walk into any restaurant in Portland and, whatever they do, they want to do it better than anybody. There’s also a certain type of frontier spirit. There’s a very inventive, survivor spirit, but also a great sense of humour. It’s not a place that takes itself overly seriously, which is kind of fun. There’s a very deep connection to Native American culture, and we certainly explore that in our show with a character who comes from that world.

“That’s a unique aspect of the show that doesn’t exist much on broadcast television. From a production point of view, we shoot a lot of establishing shots and a lot of exteriors in Portland. We try to infuse Portland as much as we can visually and also from the character point of view, by trying to find people who are a little off-centre in a way that feels true to the place.”

Making a series for broadcast television is always a battle against time, with seasons running to as many as 24 episodes. For any showrunner, that means juggling scriptwriting duties in the writing room with on-set production and post-production.

“Every show has its own ecosystem and dynamic, so you’re trying to wrap your head around that. For a show in its first season, there’s always a bit of catching up to do while you’re figuring out how to make it, because every show is different,” he says.

“The challenge is being up against the clock constantly, but we have a naturally talented crew that functions very well on this show. Then getting the scripts right is a time thing. It’s a crush every time, but that’s the game, it really is. There’s no way around it; you have a target, your show’s going on the air, you’re going to shoot something. It’s just a hustle. It’s one very long sprint.”

While he awaits word on a second season amid the ongoing production shutdown caused by the coronavirus pandemic, Richman says international viewers now tuning into Stumptown can expect a very human story wrapped inside a series that does its best to break the traditional rules of the detective genre.

“What’s so nice about Dex Parios, the heroine of this story is she’s a lot like us. She’s just constantly failing forward, and there’s something kind of refreshing about that,” he adds. “You don’t have to be a superhero. You just have to keep going at it. And that persistence and someone who doesn’t come at it with the ego of knowing that she’s right every time is refreshing.”