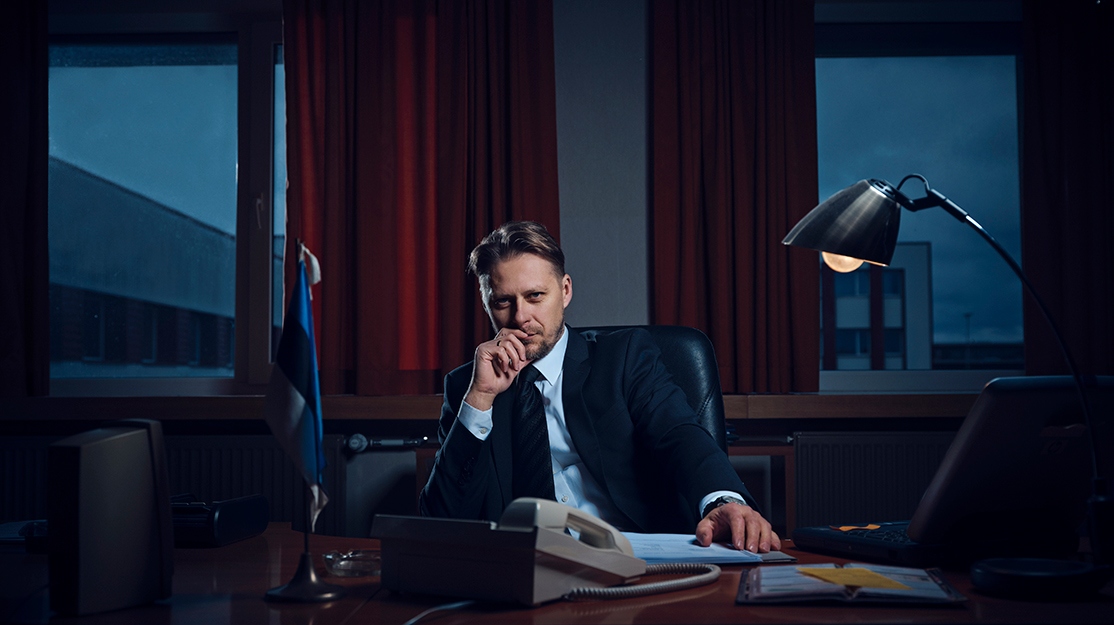 With a second season already in the can, Estonian series Reetur (Traitor) proved to be a huge hit when debuted in 2019 on streamer Elisa and then aired last year on national broadcaster ETV. The show was nominated for best drama at the 2020 Estonian Film & Television Awards, while star Tambet Tuisk was named best actor at the same event for his portrayal of protagonist Alfred Vint.

Tuisk knew he was on to a winner the first time he read Martin Algus’s script, which he describes as a page-turner and a story he knew would draw an audience thanks to its roots in Estonia’s recent history. The reaction was more than he could have hoped for.

“It’s never happened to me before where I’m walking down the street and people come up to me and say, ‘There has to be a second season. It can’t be that this shitty man is not in prison. When will the second season come?’” he tells DQ. “This kind of feedback is good. You know it works, and I’m happy about that. There was great material to play with and it was interesting mixing real history with art. These kinds of things made it a success.”

Set in 2004 at a time when Estonia joined NATO and attracted the interest of neighbouring Russia, the series follows Estonian defence official Vint as he becomes a Russian spy, sparking a cat-and-mouse chase between him and a determined young Estonian counterintelligence officer (Veiko Porkanen) as they navigate the twists and turns of their professional and personal lives.

Indeed, Alfred’s personal life is more colourful than most, as this ambitious, unscrupulous character thinks nothing of cheating on his wife, abandoning the daughter he had with another woman and also sleeping with his best friend’s wife.

Produced by Estonian production company Kassikuld OÜ, the six-part series comes from writer Martin Algus and director Ergo Kuld, longtime collaborators who were keen to push into new genres after mostly working on comedies together over the past decade.

“Estonian channels, especially private channels, don’t trust drama series because people want to laugh and it’s easy to produce comedies,” Algus says. “It was a good chance to do something thrilling, something different. Also, I knew the backstories of the spy world and it was interesting to come up with a thrilling story in this genre.

“When the series appeared on ETV, it got wide attention from the audience, politicians and journalists. There’s lots of spy stuff in our recent history, so it was an interesting and important subject. We also got a little bit more money to make it than Estonian TV productions usually get, so we could make it a bit more cinematic.”

Algus refers to one spy case in particular, that of a man named Herman Simm, who was found to have passed documents relating to Estonian and NATO security to Russia over a number of years in what has been described as Estonia’s biggest spy scandal since the Cold War. Simm was jailed for 12 years in 2009.

However, when writing Traitor, which has been picked up for international distribution by GoQuest Media, Algus had to be careful not to explicitly reference Simm’s story or any other real-life spy cases. “When the show came out, Herman Simm came out of prison, so we didn’t want to engage him too much,” he explains. “I could implement very many details from his crime to build up a character that reminds you a bit of him, but nobody can say it is Herman Simm. We were afraid that would create some unwanted fuss, but everyone in Estonia knew about this anyway.”

To play Alfred, Tuisk (Lõks, Nukumaja) also considered the story of Simm and, through reading books and watching documentaries, built a character whose wrong decisions send him deeper and deeper into a moral abyss, to the point where he spends every day waiting for a knock at the door from those out to stop him.

“I joined this project just a month-and-a-half before shooting,” the actor reveals. “I got a call from Ergo and said, ‘Of course I want to read it.’ Then after 30 minutes I called back and said, ‘Yes, let’s do it.’ It’s very interesting. I started to read all this information about the Estonian secret service from 2003 and 2004 to understand what was happening in that period. But then I just jumped into the script because, at the end of the day, it doesn’t really matter what happened – you have a script that tells you what you have to play.”

Having worked together for many years, Algus and Kuld have a long-established approach to projects, with the writer constructing the storyline and characters before developing them together with the director and then writing the scripts. Then once the show begins production, Kuld takes the lead.

“I’m in charge of the story and he’s in charge of everything going on on the set, relating to the actors and cameras and after shooting is over,” Algus says. “I try to engage him before [filming], and afterwards I just let him work. I don’t come to the set and whine, ‘I imagined this room differently,’ or something like that. I will not interfere there. It’s about trust. We have done TV series and now also movies together for 10 years. You already understand from a gesture or half a sentence what the other person means.”

On Traitor, Algus also had the support of Andres Anvelt, an Estonian politician, former judicial minister and former director of the Estonian Academy of Security Sciences Police College. “After my first period of research, I locked myself in for a week and came up with all the characters because, for me, the story starts with characters,” the writer continues. “I had to know who was in this story and what their interests were. What do they want? Then I came up with the synopsis for all six parts. I presented it to Elisa and Andres, who was double-checking the storyline. I sent it to Ergo as well, and then I just started to write.”

On set, Tuisk describes a fast, fluid process run by Kuld, who works with a small crew and knows how he wants to shoot every scene beforehand. “We don’t even have a clapperboard,” he notes, “because Ergo is editing it himself and knows what he needs, and this kind of energy also comes through in the series.”

Tuisk’s challenge was to build up the character of Alfred from Algus’s scripts in the short time he had to prepare before filming started. Though he has played real people on screen before, he says he never meets them beforehand. Instead, he looks for the decisions a character makes to help him understand their mindset at any given moment.

“For me, acting is taking from my own life and connecting it with the story,” he says. “We had quite long days. We didn’t have much time, so we had to figure out those moments very quickly, very precisely and do it in the best way. When Ergo and Martin are working together, Ergo is usually also the DOP behind the camera. But with this project, we had a very good DOP [Tauno Sirel] and that meant Ergo had more time. The DOP had his own style, using a tripod more. Ergo’s way of thinking mixed with the DOP’s helped Martin’s story and the characters come to life.”

Perhaps surprisingly, meanwhile, the production team found creating the recent past  more difficult than creating a period drama. “At first, it seemed like because it’s not set in medieval times, we didn’t have to change much,” Algus says. “But when we started the series, we understood this was maybe even more difficult because the changes are wide and so small, you just have to change everything – the number plates on the cars, every TV set. Tambet discovered that the bread was the wrong shape for 2004. The authenticity of the time was key to the success of the series – we didn’t give up on anything. People could perhaps pick up on some very little things we couldn’t change but, on the whole, it was well done.”

With Alfred remaining on the run throughout the series, the biggest challenge Algus faced was ensuring the spy earned his freedom and that viewers didn’t feel cheated by his numerous escapes.

“I wanted the main character, this traitor, to walk across a tightrope, so I had to very carefully create obstacles for him and try to keep him active without letting him get caught at the end of the first episode,” the writer continues. “He is the backbone of the series; we want to see him very close to getting caught because we want to see six episodes, not two or three. At the end, I realised I couldn’t let him get caught, even in the sixth episode.

“At the start, we talked with Elisa about how he would get caught at the end. But this cat-and-mouse game with the military police had more fuel than I expected, so it was interesting and also challenging to try to keep him not getting caught. This was the main focus of my work because everything else rested on it.”

Because of a scheduling conflict, Algus and Ergo had to depart the show for season two, which has already completed filming and is due to be released on Elisa this autumn. Set closer to the present day, the story is even “more crazy” than season one, Tuisk says, revealing that a shadowy figure in the Estonian parliament and American foreign intelligence service the CIA are involved in the new plot, which is written by Raoul Suvi and directed by Ove Musting. Anvelt is once again a consultant.

“I hope the audience will let go of the big time jump and just go with the story,” the actor says. “There are new characters and old characters, but we are trying to keep the same beat from Martin’s story. For an actor, it was quite a difficult position because the whole crew was new apart from the DOP. We were balancing between what we made two years ago with Martin and Ergo and trying to find something new. Hopefully there is a third season and we can do some crazy stuff together again.”