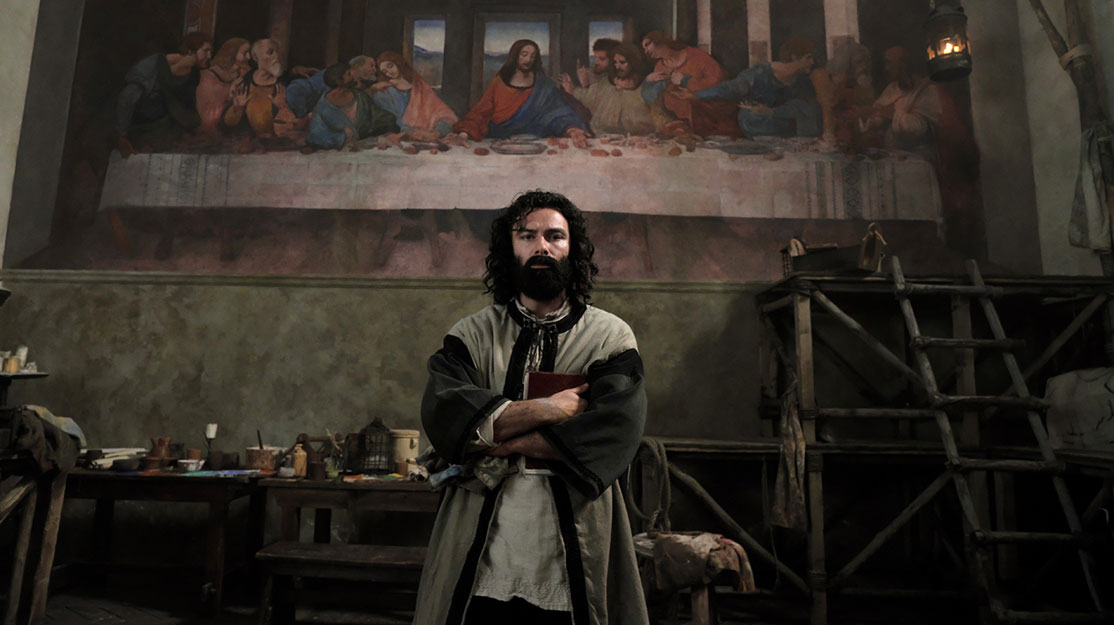 Browsing the busy shelves of bookstores, it’s not uncommon to see the faces of well-known actors staring back from the covers of fiction and non-fiction titles alike when books are re-released to coincide with a new TV or film adaptation.

One new series to impact the publishing world isn’t, in fact, based on a book. Yet such is the fascination and curiosity surrounding Leonardo da Vinci that sales of books across a variety of genres have surged in Italy since the premiere of Leonardo, about the life of the Renaissance artist, last month.

Following the show’s debut on pubcaster Rai, book sales have increased by 156% as a result of discussion, debate and publicity relating to the historical series, according to a study by the Italian Publishers Association and Nielsen.

It remains to be seen whether bookshops will experience a similar reaction in the UK and Ireland in the coming weeks after the series, starring Aidan Turner (Poldark), Matilda De Angelis (The Undoing) and Freddie Highmore (The Good Doctor), makes its bow there today on Amazon Prime Video.

Exploring the secrets and drama behind the genius, his work and his personal struggles and set against the backdrop of Renaissance Italy, the series follows Leonardo’s journey from apprentice to master as his restless curiosity moves between the arts, science and technology, driven by a quest for knowledge.

The eight-part series is framed in flashback as Leonardo (Turner) is accused of the murder of his muse, Caterina da Cremona (De Angelis). Highmore plays Stefano Giraldi, the investigator charged with solving the mystery, while Carlos Cuevas is Salaì, Leonardo’s apprentice and trusted friend, and Giancarlo Giannini is Leonardo’s master, Andrea del Verrocchio.

Produced by Lux Vide with Rai Fiction and Big Light Productions, the series was created by Frank Spotnitz (The X-Files) and Steve Thompson (Sherlock) and directed by Dan Percival (The Man in the High Castle) and Alexis Sweet (Don Matteo).

“Luca wanted to do it and, to be honest, I was wary of doing it because I thought it would be very challenging,” he tells DQ. “I find stories about artists really hard to make dramatic because the stakes are, ‘Will you make your piece of art or not?’ It’s not obvious why that’s great drama. I’ve watched a lot of movies about artists so I was really reluctant to take on the challenge initially.”

Spotnitz was swayed when Bernabei came back a year later and revealed Thompson was interested in partnering on the project.

“I was like, ‘Alright, maybe if Steve’s doing it, I’ll do it with him,’” he remembers. “That’s really what happened. But it was as hard as I thought it would be. Ultimately, we found a way into his character I found very moving. We read everything [about Leonardo] but it doesn’t tell you what he was like, what his personality was like or why he did the things he did. Books don’t answer those questions, so we had to come up with those answers ourselves.

“Here’s a guy who was abandoned by his parents, who lost himself in his work, who was as obsessive as anybody you could possibly imagine. He was the ultimate workaholic. This idea of how much of your life do you lose to work, how do you make room for other people, for love, for life… ultimately, Leonardo is about finding a family and making a family, so I found all of that very moving and [it was] a way into the story.”

For Bernabei, the challenge of making a series about Leonardo lay in how to portray the complexity of this man – an engineer, painter and architect – as a drama and not as a documentary.

“He was desperate for perfection, that was his demon inside him,” he explains. “Because he was abandoned by his father, he was not recognised as a decent human being. He always wanted to show the world, ‘I’m not a piece of garbage, I’m someone important.’ He was always making sketches;  he never stopped, his mind could never stop. His life is full of complexity.”

To reveal something new about Leonardo, Spotnitz and Bernabei struck upon the idea of telling his story in a variety of ways. First, there is the modern, fictional investigation at the heart of the story that seeks to determine whether Leonardo could have killed someone. The creators then added his muse, Caterina, into the story, before deciding that each episode would also examine how Leonardo created one of his many masterpieces.

“It’s interesting because we attempt to understand what was going on in his mind, which was so complicated, and then linking his life to his masterpieces helped to tell the story in a chronological way,” Bernabei says. “That’s an interesting and smart way of telling the life of a mysterious man.”

Behind the scenes, Leonardo is notable for being one of the first projects commissioned by The Alliance, a group of European public broadcasters that have come together to combine their resources in the face of increasing competition from global streaming platforms. Coproduced and distributed by Sony Pictures Television, the series was led by Rai, with backing from France Télévisions and Spain’s RTVE, with Bernabei joking about the “thousands of notes” coming from interested parties in Italy, France and Spain.

“I’ve done several coproductions since I’ve been in Europe and I have the grey hair to prove it, because they’re always challenging. But I have to say, the way Lux and Rai managed this was the best experience I’ve had because it largely came through them,” Spotnitz says. “Steve and I were largely protected. There were a few times we spoke directly with the other partners, but largely it was whatever other input they were getting – it was all filtered and consolidated into one set of notes. In terms of the coproduction aspect, it’s always hard doing coproductions but this was probably the best experience I’ve had.”

Bernabei recalls “hundreds of hours” of script meetings, while the series also went through various cuts before US-based editor Michelle Tesoro brought a fresh eye to the project. Musical director John Paesano designed a modern score that would stand out against the show’s historical setting, while another aspect of the series that proved to be particularly complex was recreating Leonardo’s artwork.

“It’s not easy, as a viewer, to appreciate how many versions of art you have to do when you’re not shooting them in sequence. And if the art isn’t convincing and right, it falls apart,” Spotnitz says. “We had to create a lot of art that was Leonardo-esque, but not Leonardo, so that was a huge cliff we could have fallen off and I don’t think we did. But it was really hard. It may not be obvious how difficult that was, but it was extraordinarily difficult. Lux found this studio north of Rome where they are specialists in art from this period and we used a lot of their artists to recreate the art for the series and make sure it was accurate.”

The effort put into reproducing authentic artwork for the series is just a small insight into the scale of the project, which was one of the first major productions to resume filming after the initial Covid-19 lockdowns last spring, with cameras rolling again in June before the production wrapped in August.

In total, the production spanned 2,000 hours and involved 3,000 crew – including actors and extras – and 2,500 costumes. The series used more than 50 filming locations alongside an expansive 20,000-square-metre backlot that recreated 15th century Florence and Milan, which took 200 workers five months to construct at Lux Vide’s studios in Formello.

“The backlot is so big because we were supposed to shoot in Milan but, unfortunately, it wouldn’t have been possible,” Bernabei says. “When we started to have Covid bubbles and not allow anyone who wasn’t tested on set, we decided to separate the crew between studio and backlot, so we had to make Milan in the studio and have this huge backlot, so we doubled our construction. But in the end, it was more efficient and safer for us than going around and finding other locations close to Rome or wherever because we had to keep the crew really safe – and especially the actors, who weren’t wearing masks.

“We decided to build it and we were building during the shutdown. That’s how we were the first ones to restart. We had other problems – Freddie Highmore had to fly back to Canada to shoot The Good Doctor, so the pressure was quite big.”

Bernabei hopes that as well as fuelling new book sales, the series will bring together people fascinated by the story of Leonardo following the its notable Italian launch, which attracted more than seven million viewers.

“We are not talking about something easy, a detective story or a medical show. It’s talking about art, the complexity of a man and the Renaissance, so its success was not taken for grated,” he says.

“We were quite surprised. It’s a dream, especially in this day. Ratings like this don’t exist in television anymore. We are proud as producers and as a production company, and I’m proud for people because if you give something intelligent, inspired, beautiful and well done, when there’s a lot of thinking behind it, you can catch people. Families joined together to see a television event, so this is important for public television and for big broadcasters. It’s still possible to get the family to watch television together.”