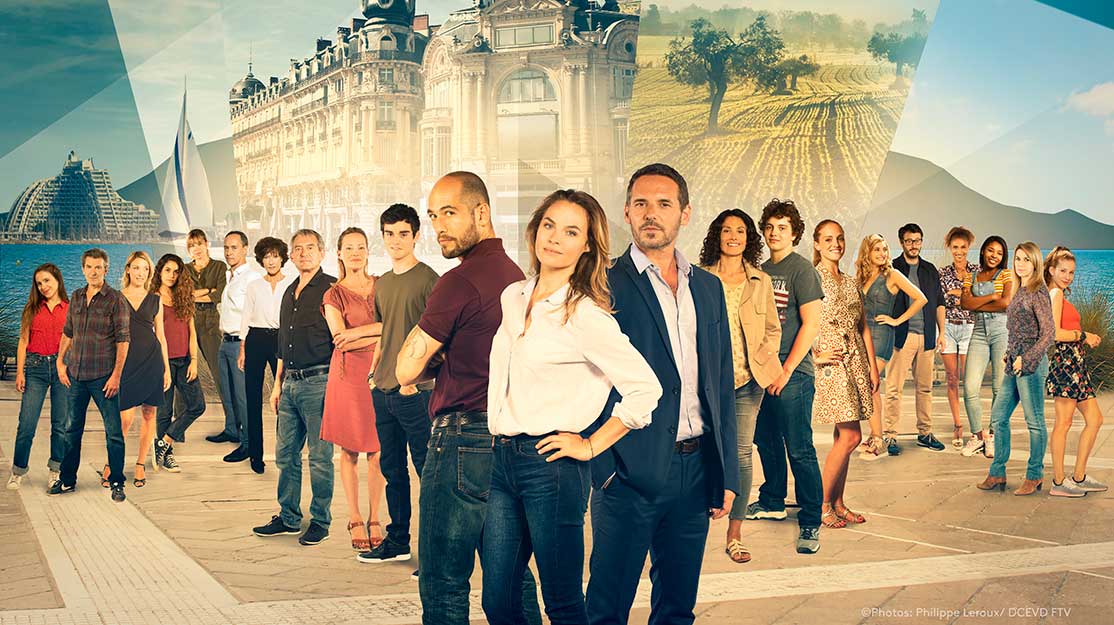 A new daily drama aims to paint a portrait of modern France. DQ speaks to producer Toma de Matteis about France 2’s scripted series Un si Grand Soleil (Chronicles of the Sun), which has an initial commission of 235 episodes.

The lives of more than 50 characters collide in a new daily drama launched by French broadcast network France 2.

Un si Grand Soleil (Chronicles of the Sun) begins as Claire travels back to the seaside city of Montpellier with her teenage son Theo after a 17-year absence. Her return from Africa is motivated by her need to reveal the existence of a family to Theo, and to enrol him in high school.

Most importantly, she has a meeting with a childhood friend who has information regarding her sister’s disappearance. But when Claire finds this friend murdered, she is taken into custody and accused of the crime.

The series, which launched last month, interweaves tales of family, love, drama and everyday life in the south of France.

Here, producer Toma de Matteis tells DQ about the opportunities and challenges of producing a daily drama, with France 2 initially committing to 235 episodes.

How would you describe Chronicles of the Sun?
Chronicles of the Sun is a daily serial drama of 22-minute episodes aimed at a broad audience. It portrays today’s France: modern, multiple, diverse, innovative and aspirational. Against a thriller background, the first season presents the heartbreaks, moral dilemmas, love affairs, dreams, mysteries and fits of anger and laughter that shape the daily lives of the people of the Southern French city of Montpellier and its surrounding area.

What did France 2 want in terms of a new daily drama and how did you develop the series with the network?
France 2 wanted to have its own daily serial produced in-house by the France Télévisions group and its France TV Studio production subsidiary. The channel felt it was important for the daily series to reflect contemporary France and embody its values: multiplicity, diversity and innovation. France 2 participated in all stages of the series’ development, which lasted nearly a year-and-a-half from the first auditions to the writing and choice of locations. Ultimately, this show is the fruit of a totally symbiotic collaboration between the producer on the one hand and the broadcaster on the other.

What advantages does this continuous format have over a normal episodic series?
The advantage of a daily serial is definitely the opportunity it provides to explore the lives and emotions of the characters in great depth; to spend time with them and so create a fresco of today’s France that is much less simplistic than would be the case for a more traditional series format.
Featuring a very wide range of characters is a specific characteristic of this type of daily format, making it possible to develop a broader spectrum of genuine social viewpoints and to analyse them in a much subtler way. In short, the everyday format provides a rich, fascinating reflection of French society.

How would you describe the writing process – how do you plot storylines for up to 50 characters?
The process is highly structured. Twenty-five writers take their turn in a number of workshops directed by a ‘conductor,’ Olivier Szulzynger, who is the coordinator of the large team.

What is the look or style of the drama and how did you achieve this?
The idea is to stick as closely as possible to the zeitgeist and those things that shape modern Franc – its diversity, dynamic nature, aspirations and actual optimism!
This intention shapes the series’ look and style, which are modern, lively and dynamic, the fruit of meticulous teamwork bringing together the showrunner, the artistic director, the channel’s editorial head and the producer.

Tell us about the team making the series. Will it remain the same group, or will you have new people joining at different times?
Naturally, there’s a core team behind the writing, look and style, music and so on. But obviously new talent will be joining the venture. That’s important because it brings in fresh ideas and new blood, and regeneration is an essential issue when working on this type of format.

Is the series realistic?
Yes, Chronicles of the Sun is generally rooted in a form of reality. The problems encountered, the everyday lives of the characters – all those things closely reflect real life. However, it doesn’t drift into ultra-reality or some form of ‘reporting.’ It is very much fictional. It takes our viewers into an ‘improved’ everyday world.

What stories do you hope to tell about modern France and why is this format the best way to do it?
The daily format and the range of characters the series requires enable us to present viewers with an array of viewpoints, examining a wide diversity of social problems without acting as a censor or judge. Each viewer can come to their own conclusions. Our role, our public service broadcasting mission in this daily serial for the general public, is to encourage and facilitate social debate.

How long could the series continue for?
For decades! In any case, that’s what we’re hoping, and the whole team will be working to achieve that.