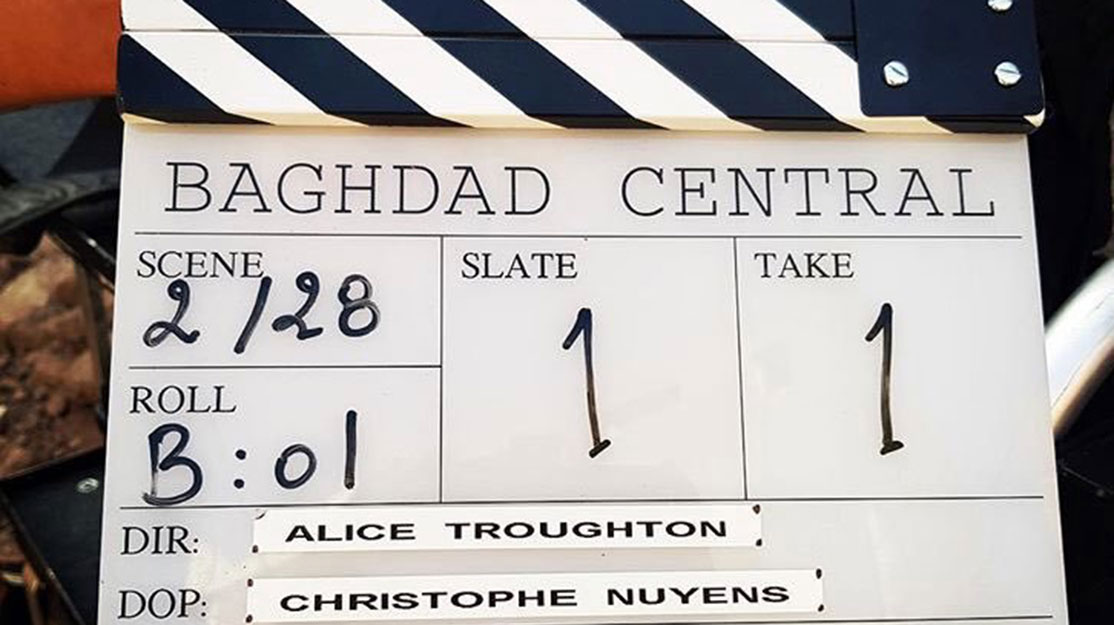 Chaos, crime and paranoia abound in Baghdad Central. Stars Waleed Zuaiter and Corey Stoll and executive producer Kate Harwood tell DQ more about this crime series, set in the aftermath of the US invasion of Iraq in 2003 and the subsequent occupation.

When the project was first brought to its attention, Channel 4 was really keen. Perhaps too keen. So once Baghdad Central was handed a six-part commission in July 2017, the hard work really began for writer Stephen Butchard and executive producer Kate Harwood.

“We bought the rights to the book sometime ago. Channel 4 picked it up quickly but it was such a counterintuitive way to start a drama,” recalls Harwood, MD of producer Euston Films. “We needed to make sure we really knew what it is, what it actually is. So we did a lot of talking, thinking and storylining and then plunged in.”

More than 12 months after the commission was announced, filming took place on location in the Moroccan cities of Ouarzazate, Mohammedia and Salé between September and December last year. Support on the ground came from production partner K Films, which helped to put the cast together early on alongside casting director Kate Rhodes James. “She used that time [before filming] to really get an encyclopaedic knowledge of who was out there,” Harwood continues. “She was extraordinary. She was working towards very particular characterisation. It took a long time.

“Then in Morocco, we needed to do contemporary Iraq, but most of all we needed to do Baghdad, and that was the hardest thing. We had a very willing production designer, Helen Scott, and a brilliant director in Alice Troughton.”

Set in October 2003, six months after American forces began their occupation of Baghdad, the disbandment of the Iraqi army, the police and civil leadership in the aftermath of the invasion means there is no one in charge and no effective rule of law.

Amid this chaotic environment, Iraqi ex-policeman Muhsin al-Khafaji (Zuaiter) has lost everything and is battling daily to keep himself and his sick daughter Mrouj (July Namir) safe. But when he learns his estranged elder daughter Sawsan (Lubany) is missing, Khafaji must begin a desperate search to find her.

He soon finds himself up against her enigmatic university tutor, Professor Zubeida Rashid (Khoury) and discovers Sawsan and her two close friends have been leading a hidden life that has put them in great danger.

Khafaji is then recruited by Frank Temple (Carvel), a former British police officer on a mission to rebuild the Iraqi police force, to give his operation credibility. But unknown to Temple and his US adversary, American military police captain John Parodi (Stoll), Khafaji has his own reasons to collaborate with the occupying forces.

Meanwhile, a new threat represented by security op Douglas Evans (Maskell) provides a terrifying and sinister counterforce to his efforts.

“I was told not to read the book, just because it’s very different from the scripts,” Stoll says of his preparation for the role. However, he did go back to reports and articles written at the time of the invasion, “soaking in all the stuff I had forgotten about,” as well as reading the extensive notes provided by the production team. “A lot of us feel that, because of the terrible things currently in the States politically, it’s easy to say, ‘Oh, I wish we had [former president George W] Bush back.’ But then you remember how dysfunctional that administration was and the administration of the Iraqi occupation. It was a disaster. The regime change in Iraq was as destructive as anything.”

Stoll praises writer Butchard (The Child in Time, The Last Kingdom) for constantly shifting the allegiances, suspicions and dynamics between the triumvirate of Khafaji, Parodi and Temple. “While there’s never really a Temple-Parodi alliance, Khafaji is definitely played off by the two of them and plays off the two of them,” the actor says. “Within only six episodes, there are so many different switches. Our relationship [Parodi and Khafaji] is constantly going back and forth between mutual respect, suspicion and a very cynical sense of how we can use each other.”

“It’s such an interesting relationship,” Zuaiter agrees, noting his character’s own flaws and the dark past that will confront him during the series. “One of the things Alice told me very early on was this relationship has a lot to do with Parodi’s sense of morality, and our relationship brings out Khafaji’s own sense of morality. Similarly, the relationship with Sawsan is about courage; with Khafaji’s friend Karl (Youseff Kerkour), it’s loyalty; and with Mrouj, it’s intelligence. The moral heart of the story is the questions they wind up covering and the discussions they have and, on a bigger picture, it’s about what we’re doing, what’s happening on a global scale with the world.”

But despite emotional themes swirling with commentary about the Iraqi occupation, Harwood says Baghdad isn’t an issue-led series. Instead, she believes its roots in the crime genre make it “much more accessible and palatable” to viewers. “I love crime drama; it’s a million different things but the great thing is it just kicks the door open when people are at their weakest, their most vulnerable, their most emotionally driven,” she says. “That’s why we keep going back to it. It’s much more than that. Some of the greatest television of the last 30 years has been crime drama in a way, from different perspectives, different worlds [and at a] difference pace. From The Sopranos to Breaking Bad, they’re all crime dramas because murder, money and love expose us. It’s in that classic heartland.”

Behind the camera, lead director Troughton (Doctor Who) was very much an actor’s director, Stoll and Zuaiter say, praising her preparation, the numerous opportunities to rehearse on set and her willingness to collaborate with the cast on how scenes should be played.

“I love it when directors say, ‘I don’t have all the answers.’ You’re looking for the collaboration of what the actors will bring,” Zuaiter says of Troughton. “A couple of times she would come up to Corey, me or Bertie and say, ‘I’m not sure what to do here, do you have any ideas?’ It takes a lot of courage to do that, a lot of trust in your cast and really good casting.”

Harwood picks up: “She was very good at some of the quieter scenes in Khafaji’s apartment, where she really loved the tea drinking. It was really enthralling when you go back into his world each episode and he’s making a cup of tea and having a think. I found those scenes really absorbing because she found the space and time to reflect.”

Distributed globally by Fremantle, Baghdad Central will have its world premiere in France when it plays in competition at the Series Mania festival next week. Stoll says the drama presents a world he’s never seen on film before, while the specificities of the characters and the families in the story will resonate with audiences the world over.

“I’ve never really seen a portrait of what Iraqi life was like under occupation, or even really Iraqi life, period,” he says. “This is a middle-class Iraqi family that seems in some ways very exotic but is having the same conversations a family in Ohio is having. So that specificity draws you in to the uniqueness of it. It’s the story of a family. That really is the core – this man and his children – and that’s obviously completely universal.

“As the American character in this, it’s exciting to be a part of something where it is about the Iraqis. It’s their story. That doesn’t mean Parodi is one-dimensional or just the bad guy. He’s not just the good guy either. Stephen was very clear about the contradictory forces working on all the characters. Nobody is working from purely selfish motives.”

Zuaiter adds that the series marks the first time he has played a character like Khafaji. “This type of role in the US would somehow be subservient to somebody else,” the Colony and Prison Break actor says. “He’s the most ballsy character I’ve ever played – he’s really got huge balls! That is what I get excited about when I’m watching. It’s one of those shows where he’s a father, he’s searching for his daughter, but it’s the first time you see somebody like this making these choices, and he’s up against some really serious competition with the US Army and the Coalition forces. That’s pretty ballsy.”

Harwood concludes: “The great thing about setting a crime drama in a world where you can get your head blown off just by stepping outside of your front door is you don’t have to worry about jeopardy. And you don’t know who is shooting at you.”