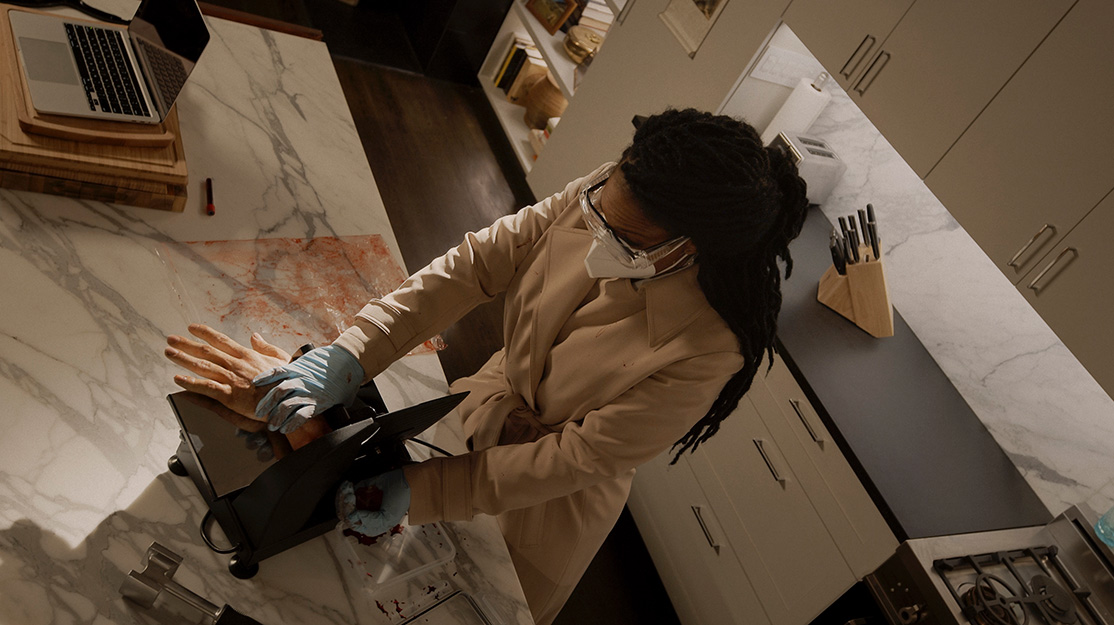 The Good Fight and Evil creators Robert and Michelle King reflect on their experiences making The Bite, a six-part comedy-horror series that sees zombies emerge during the Covid-19 pandemic.

Though Robert and Michelle King are best known as the creators of award-winning, long-running legal dramas, it’s notable how much of their screen work centres on a genre that couldn’t be further from the verbal sparring of a courtroom.

Running for seven seasons from 2009, The Good Wife stars Julianna Margulies as a defence attorney who resumes her legal career after her husband is involved in a sex and political corruption scandal. Spin-off The Good Fight followed in 2017 with a cast led by Christine Baranski, who reprised her role from the original series.

But the husband-and-wife showrunning team have more recently developed their own brand of horror with titles such as BrainDead, a political satire in which a fresh-faced Capitol Hill staffer discovers bugs are eating the brains of members of Congress, and Evil, a thriller about a sceptical forensic psychologist who investigates incidents of supernatural phenomena.

While filming is currently underway on season two of Evil and season five of The Good Fight, the Kings have also spent the past year producing their latest excursion into horror. The Bite, a six-part series that debuted on US streamer Spectrum TV last Friday (May 21), sees two neighbours face unprecedented challenges when a deadly new strain of a virus arrives in New York. It is coproduced by Spectrum Originals, CBS Studios and King Size Productions.

“The guiding light for us is to avoid earnestness,” Robert tells DQ. “We’re not big fans of shows that wear their heart on their sleeves or have lawyers giving speeches. We’re drawn to shows through which we can explore the issues of the day or what’s going on with us biographically. A coming-of-age drama is the last thing we would do.

“What we would rather do is take the substance of a coming-of-age drama or whatever emotion we’re going through and channel it to a genre that has its own level of excitement to it. We’d never do a law show that was just a law show. You want to do something that’s about what fascinates you. What is going on with Donald Trump? That was what The Good Fight was about. Now The Bite is about the current pandemic we’re going through, not just the science and politics of it but how we’re all personally dealing with it.”

In fact, Robert’s first job was a film produced by Julie Corman, who is married to cult horror director Roger Corman. “My first job in the business was doing a killer cockroach movie – cockroaches that eat people,” he says of 1988’s The Nest. “It probably is somewhere in the DNA of my writing style anyway. All I can say is I enjoy them. If I have a chance to look at a drama about dockworkers or a zombie show, I choose the zombie show.”

Although the series is set against the backdrop of the Covid-19 crisis, the Kings’ ambition was not to make a “tedious pandemic show” – a feat they certainly achieve by throwing zombies into the mix. Rachel can only watch through her computer screen as her patients suddenly discover a taste for flesh. Lily has a more personal experience when one of her clients who visits her during lockdown also undergoes a transformation.

The Kings had watched other series produced during the pandemic and noted the challenges of filming in a world of social distancing and face masks. But one of the key decisions they made early on was to cast acting couples so they could work together in a bubble and also perform intimate scenes without any associated health risks.

That meant McDonald and her husband Will Swenson (as Brian Ritter) would work together, as well as Pasquale and his wife Phillipa Soo (playing Zach’s CDC colleague Cyndi Estereo), but the Kings weren’t about to have these couples replicate their real-life partnerships.

“When we decided Audra and Will would be the main couple, we then wanted to shake it up a bit. We didn’t want them to be married because that’s a little predictable,” Robert explains. “So in the series, they’re cheating on their spouses with each other, which gives it a little more excitement, energy and deliciousness. Then we knew Rachel’s husband would be working at the CDC so we went with Steven Pasquale and his wife Phillipa Soo – and they’re playing as two people having an affair, too. Once you start there, you have this idea of how you could avoid the blandness of spouses playing spouses. Here, whenever they were kissing or having sex or sleeping with each other, you knew there was this added excitement about the fact they’re really cheating. It just gives it that added something.”

While the Kings ran online writers’ rooms for both The Good Fight and Evil, the fact they were reuniting with writers from previous seasons diffused a lot of the awkwardness about working together on Zoom. On The Bite, they hadn’t worked with many of the writers before, meaning Michelle found “a weird disconnect because we’ve only met them virtually.”

“It’s a little more formalised when it’s over Zoom,” she says. “When you’re all together, typically people aren’t going to raise their hands if they have something to say. But we’ve come to do that over Zoom rooms otherwise it’s chaotic and you don’t hear each other.”

“The thing is you’re not landing in silences as much,” Robert says. “Silence on Zoom is a killer. You’re just staring at each other. You could do that in a writers’ room, just stare at each other in reality. But on Zoom, everybody’s aware you’ve got to fill the air with something. We did a shorter room than we would on a real writers’ room. We did three-and-a-half hours a day, whereas our usual writers room in real life is eight hours a day. At a certain point you just start getting lazy and sleepy so we had to work around that.”

During the writing process, the showrunners were also aware of the limitations they would have to work within on set, such as the lack of camera movement that would be possible with no operators in the same room as the actors. Instead, they turned to visual effects supervisor Glenn Neufeld, who they had worked with on Evil, to find out what they might be able to do safely in post-production.

“A lot of it was leaning on visual effects in a more-than-usual way because it was the way you got around the limitations of doing a Zoom show,” he says. “That’s what gave it that something extra.”

All the actors that appear in the series were cast from the New York area, as opposed to those on Evil or The Good Fight who might fly in from LA or elsewhere. Then McDonald and Schilling worked together in the same brownstone apartment building, each having a dedicated, controlled floor with a separate area for the crew.

“The only person that would interact with the actors was the director, so it was very different,” says Michelle. “And then for everyone else [appearing on screen], we had to ship cameras to their homes so they were functioning as their own crew.”

“We would never go to their home,” explains Robert. “One of the weirder things is you had a Zoom camera there trying to find the best location for the shoot and once you found a good corner or a good background, it was about manipulating the props we would send to the house to make it look better and more appropriate. For Leslie Uggam’s Dr Hester Boutella [Rachel’s mother], we had to make it look like her living room was a place that could be part of a lab. It was all this craziness of working within the limitations to keep everybody safe.”

The CDC set wasn’t recreated in Swenson and Soo’s home, however. “It’s even more ludicrous than that,” jokes Robert. “We rented this brownstone house in Hell’s Kitchen [for the main set] and at the beginning of the filming, somebody in the street just approached one of the producers and said, ‘You know what? We’re going on vacation for a couple months if you need to rent an apartment across the street, ours is available.’ So that became the CDC.”

As you might expect from a zombie show, a big part of making the series appear realistic came down to the make-up used to create these flesh-eating monsters. When the bite marks first appear on the actors, those were decals the actors would apply themselves via instructions over Zoom from the make-up team. But the full Zombie look was actually achieved by visual effects added retrospectively in post-production.

Furthermore, when Rachel is seen holding her online appointments, often McDonald would be interacting with a blank computer screen, and sometimes she would just call up the other actor so she had a voice to interact with. The other side of the scene would then be filmed separately and the final version was stitched together in the edit.

“You really wouldn’t know what you had until you edited it together,” Robert says. Michelle adds: “You really needed top-notch actors, which we were fortunate to get, in part because Broadway couldn’t be open.”

While Rachel and Lily both have appointments with their various clients, they remain at the centre of the show – and interact by shouting out of their window to each other, a deserted New York street visible in the background.

While they promise the limited series concludes at the ends of its six episodes, they also suggest this might not be the end of Rachel and Lily’s stories, though they wouldn’t return to the show in its current form.

“We really like where the characters end up, so we would [do more] just because of that, but I don’t think we’d do this kind of pandemic show again,” Robert notes.

Distributed internationally by ViacomCBS Global Distribution Group, The Bite certainly feels very different from other ‘Covid shows,’ not just with its story but with the visual dynamics that go further than just showing a Zoom call on television.

“I would say that’s our intent,” Robert says. “We all went through this experience together. A lot of us are still going through that experience, and if you were going to watch something about that experience, it would probably need to be different enough from the day-to-day that you are entertained, and to us, that’s zombies, because at least at this point in the pandemic, there have not been zombies in reality. And we don’t expect there to be.”

The Kings’ other shows will address the pandemic “gingerly,” Michelle says, revealing that it won’t be a major focus point in those series. But making The Good Fight and Evil is certainly a lot easier that The Bite, with full production crews working as normally as possible.

“I would say filming the other shows is significantly easier because you have a crew that has been doing this forever and you’re not having to ask Leslie Uggums to start adjusting lights,” Michelle says.

“It made us enjoy the process of the other shows more because you’re not struggling under limitations,” Robert says. “Yet there’s a lot of creativity that comes out of a struggle with limitations, too. When you know you can only do a certain number of things with your visual effects, it makes you try to work creatively. But still, I don’t think I’d go back.”

As for their two favourite genres coming together in the future, Michelle quips: “The zombie lawyer show is for someone else to do.”