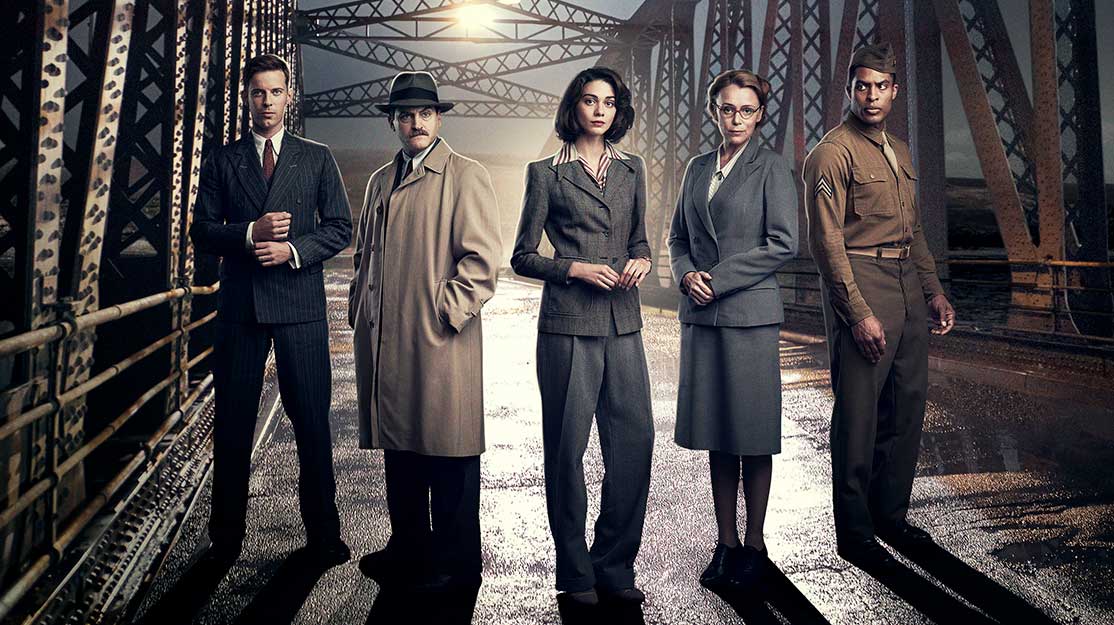 Channel 4’s stylish new spy thriller Traitors, starring Keeley Hawes and Michael Stuhlbarg, looks at the communist threat to Britain just after the Second World War through the eyes of a young woman. DQ joined the cast on set in London.

Imagine a Britain deeply divided over political matters, with well-founded fears of Russian government interference and its ‘special relationship’ with the US seemingly on shaky ground.

While that may be a perfect description of today’s UK, in this case it applies to a period three-quarters of a century ago in the fledgling days of the Cold War. It’s that correlation that makes Channel 4’s new thriller, Traitors, even more relevant in its portrayal of international turbulence and murky government goings-on.

Created and executive produced by playwright Bash Doran, who wrote four of its six episodes, Traitors is set during the pivotal time from the end of the Second World War up until 1948.

“The series is extremely timely as it tackles an extraordinary moment in British history that has continued to play out across the years,” explains Emma Willis, MD of Twenty Twenty Productions (part of Warner Bros International Television Production), which is producing alongside 42 for Channel 4 and Netflix, in a deal negotiated by All3Media International. “At the end of the Second World War, as is true today, the nation was divided with deeply opposing views on what Britain’s place in the world should be.

“Many of the series’ key themes are extremely relevant to today – race, gender, class inequality, the role of the welfare state, the special relationship with the US and a distrust of Russia. I’m sure this is one of the reasons why C4 commissioned the project – together with the fact it had a fantastic creator in Bash Doran and strong female leads.”

On the surface, Traitors is a young woman’s coming-of-age story. Clique’s Emma Appleton plays Feef Symonds, a naive young aristocrat who lands a job in the civil service immediately after the war, eager to make her mark rather than be married off to an earl. Actress-of-the-moment Keeley Hawes (Bodyguard, The Durrells) plays her influential boss, Priscilla Garrick, and Call Me By Your Name’s Michael Stuhlbarg plays a US agent, Rowe. He quickly tries to turn Feef into a double agent, eager to root out Soviet operatives in the British government.

Executive producer Eleanor Moran laughs about the moment she approached Doran with the idea for Traitors. “It was 2013 and I was thinking politics was in a really depressing place, which is hilarious to think of now,” she says.

She’d had an idea about a female-centric period political drama with an international feel – and she had a particular female in mind. “My grandmother had this incredible experience during the war where she had a great deal of freedom,” explains Moran. “She worked in the spying business and was a codebreaker. And after the war, all of that ambition was shut down when she got married.

“I thought that moment in 1945 was incredible for women in that there was this incredible push to go back into the home, but also with the Labour [Party’s landslide general election victory] and beginning of the welfare state, the civil service offered these huge opportunities for women.” However, the ban on married women working for the service forced females to resign their jobs upon tying the knot.

On set at one of Traitors’ many London locations last summer, a church in a leafy Georgian square in Islington, Hawes is looking business-like in Priscilla Garrick’s utilitarian work suit. Sitting down for a chat in a church hall – she’s here to film a scene with Stuhlbarg in the churchyard – Hawes explains her dismay at learning of the marriage ban.

“I knew nothing about that,” she says. “The women in the civil service are being asked to go back to being housewives after spending the war being ambulance drivers. Suddenly being given the sack! It’s just terrible.

“Priscilla campaigns against the marriage ban, even though she’s not married. She is a real champion of women and really modern in that way. And when Feef comes in, Priscilla sees she’s bright.”

Traitors, which is distributed globally by All3Media International, weaves John le Carré-style spy plots into a story about women’s social struggles. It’s 1945 and the Soviet Union has replaced the Nazis as the biggest threat to global stability and democracy. But just at that moment, in September, President Truman decides to close America’s wartime spying agency, the OSS (Office of Strategic Services).

“We’re capturing that moment when the Soviets were trying to influence the whole of Europe and did manage to get people within British secret service to great effect,” explains Moran. “Michael Stuhlbarg’s character, Rowe, who is an OSS agent, is ahead of the game and realises there is infiltration, and his job is find out how much.” It’s the era of the Cambridge Spy Ring, which would come to light several years later.

Stuhlbarg was lured to British shores by the prospect of working again with Doran – he’d been in episodes of Boardwalk Empire and The Looming Tower that she’d written – and Dearbhla Walsh, who directed him in the third season of Fargo.

Rowe, explains Stuhlbarg, becomes a rogue agent after Truman’s disbanding of the OSS. The actor’s research impressed upon him the complexity of real-life OSS agents.

“Some of these men of the OSS balance a kind of integrity with an ability to lie, cheat, steal and murder,” explains Stuhlbarg. “So there’s this great juxtaposition of and being able to live with all that stuff – these are people fighting for the survival of democracy and are willing to do anything for it.

“Rowe thinks it’s essential that America has an operational intelligence agency to compete with all the other spies.”

The 17-week shoot took place last summer in studios in Cardiff, in Morocco (doubling for Egypt) and in various picturesque London spots in which real spies surely operated – the Inns of Court, Whitehall and St James’s Park. Innovation was required, too – a replica House of Commons was built at University College School in Hampstead for scenes featuring a newly elected Labour MP played by Luke Treadaway.

Ultimately, Traitors chimes with what’s going on in the world today and also delivers a period thriller about a time not often depicted in spy stories.

“It’s very much about the kind of global fight for hearts and minds, much like the way we’re going at the moment, with Russians infiltrating the US election and Brexit,” says Moran. “This is a call back to that and also a depiction of a very specific moment in British social politics.”