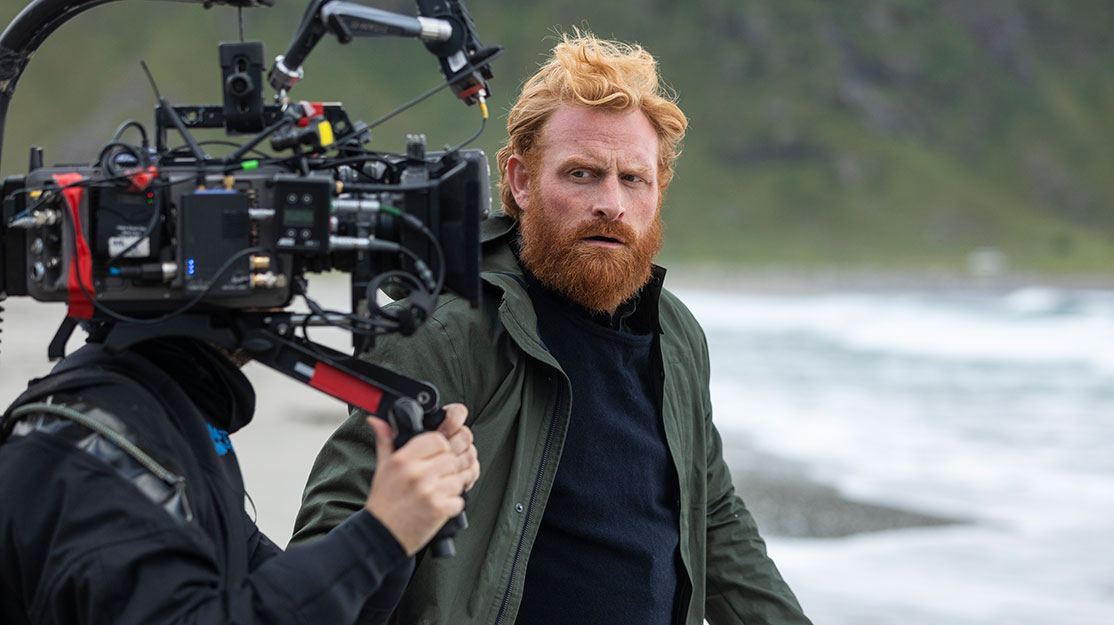 Long before Kristofer Hivju starred in Game of Thrones, he was developing an identity-switch drama with writer and director Kristoffer Metcalfe, a long-time friend. The pair tell DQ about bringing Norwegian series Twin to the screen.

For the past six years, Norwegian actor Kristofer Hivju has been better known as Tormund Giantsbane, the formidable Wildling warrior who becomes a key ally of Jon Snow in Game of Thrones.

Following the climax of the HBO fantasy epic, which concludes after eight seasons this weekend, fans of the series will get to see much more of Hivju – twice as much, in fact – in his next show, identity-switch drama Twin.

The story follows Erik and Adam, a pair of identical twins, both played by Hivju, who live completely different lives. When surf bum Erik falls into money trouble and becomes homeless, he seeks out his brother for the first time in 15 years, leading to a row that ends when Adam’s wife, Ingrid (Rebekka Nystabakk), accidentally kills her husband.

To avoid a murder investigation, Erik takes on Adam’s identity, embedding himself with his brother’s family and their successful business. But he soon finds pretending to be someone else is more difficult than he first thought.

The series has been created by Hivju and lead writer/director Kristoffer Metcalfe, who have known each other since they lived together in Oslo in their early 20s. Four years ago, discussions between them about their own lives, their identities and the choices they have made prompted the idea behind the story.

“Ingrid is the one who is responsible for the death of her husband. Instead of Erik wanting to do the identity switch, she forces him to do it,” Metcalfe explains. “It was more interesting to work with these two people who have done a very bad thing but are now doing this to be good. Erik has to play his brother and clear up his old life because he now has an opportunity for a new start. But Ingrid can also find herself and reflect on the life she has been living, and understand that the marriage was horrible and Adam had a lot of secrets.”

Events in the series play out across just one week, heightening the intensity of the situation  in which Erik and Ingrid find themselves. And while one might expect a police investigation to be the biggest obstacle the duo face, it turns out that relationships within the family pose the main threat to their plot.

“The more people care about them, the more challenging it gets, because what you really want when you’re hiding something is people staying away,” Metcalfe says. “Where you get a lot of the comedy is from really small tasks, like Erik taking his son to Kindergarten. That’s half of episode five. Or dealing with your daughter who is struggling at school and suddenly you’re meeting the school principal who is a bitch. Erik is discovering all these everyday things that almost everyone else has in their lives.”

The story also focuses on why Erik and Adam came to blows, and the love triangle involving the brothers and Ingrid that led to the twins’ estrangement. “When you have this very strong premise, you can be quite subtle in the way you deal with the backstory,” Metcalfe continues. “You don’t have to be too explicit about it, and you can actually have it feed into the story. The answers are not always clear when it comes to what really happened.”

Hivju says the idea of a twin brother replacing his sibling was something that “haunted” the pair until they decided to commit the time they needed to develop the story.

“We fell in love with Erik and this guy who hasn’t taken responsibility for anything in his whole life and lives day to day,” the actor says. “He’s a lovely guy but it’s like somehow he’s a child. Adam is appears as a straight businessman, but he has his own secrets. It just felt nice to take him out and put the other guy in and see the drama it created.

“Often, as an actor, you get an offer to play a role, you play the role and you don’t know about the four or five years that have happened before to create everything, pitch it and fund it. It has been a new thing for me to be part of that process and, in some way, it’s the best way to prepare. On my first day of shooting, I had been preparing for five years. So it was fantastic. It was like when Sylvester Stallone did Rocky – he had created his own role and he just did it.”

HBO supported Twin’s development before Norwegian pubcaster NRK picked it up two years ago. The series is due to air this autumn, having had its world premiere at Series Mania in France in March. It is also being screened at the Cannes Film Festival this Saturday.

Metcalfe wrote the show alongside Anne Elvedal and Vegard Steiro Amundsen, who joined him to work out the story beats and structure. Co-director Erica Calmeyer also joined the project early on to complete episode rewrites and ensure the two directors were working from the same page.

The process wasn’t quite as smooth as Metcalfe had planned, however, with production having to be pushed back due to Hivju’s commitments on Game of Thrones.

“For a long time, he died,” Metcalfe recalls of the plan for Hivju’s character in the HBO mega hit. “We started pre-production, then he called me and said, ‘I didn’t die,’ and we had to postpone everything. It was quite nice moment when we could cut his beard.

“He flew straight from Belfast, where he had a million zombies around him all the time, and came to the studio and the first assistant director said, ‘OK, Hivju’s on set for his first day.’ He comes in and looks around at the whole crew, looked at me and said, ‘Is this everybody?’ I said, ‘Yes, welcome home!’ We’re a small crew but it’s very specific. People have one job and they are doing it extremely well. In some of the locations in the north of Norway with tiny roads, you wouldn’t be able to have an American crew in those areas. You need a small, flexible but very competent gang. It’s important that my role is also creating a sense of being in a band on tour for nine months.”

Filming took place in an area of northern Norway called Lufoten, an archipelago that stretches out from the mainland into the Norwegian Sea. Its history as a fishing area, coupled with its popularity as a tourist destination that blends dramatic mountains, hidden beaches and jagged coastlines, meant it offered the perfect visual background for the series, which hails from Nordisk Film Production in coproduction with Storyline Nor. International sales are handled by TrustNordisk.

“We have an extremely spectacular location, with very dramatic mountains and ocean, but early on I said there would be no [filming with] drones,” Metcalfe says. “We’re not showing nature, we’re using it as a dramatic emphasiser surrounding the characters and building the universe from there. Because of the urgency of the story, we tried to transport that into the visuals, so it was important to have energy in the visual style. When the camera relaxes, there’s a reason for it. The camera should be as stressed and high-paced as the two characters dealing with this crisis.”

For scenes featuring both of the twins, the crew decided not to use complicated (and expensive) visual effects to have Hivju sharing the screen with himself. Instead, they filmed using a picture double, who would stand with his back to camera while Hivju jumped in and out of different costumes depending on which twin he was playing. An earpiece would also relay to him previously recorded dialogue so he could act against the rhythm of the words when he switched roles.

“It was confusing, I can’t say otherwise,” the actor laughs.

The crew also opted to shoot fast and flexibly using handheld cameras. “We didn’t want any fancy camera movements,” Hivju says. “We just wanted to have a documentary style so we could improvise and be free to explore the scenes while we were shooting. We changed the script all the time and tried different stuff. We wanted the creative freedom to do whatever we wanted and do it fast. Compared with other big productions I’ve done, it was very nice to have that freedom. If something went wrong, we could just reshoot it.”

Metcalfe praises NRK for its current approach to drama, citing Twin and off-beat crime drama Magnus as examples of how it is willing to take creative risks.

“My experience with the Scandinavian TV market is series where you have a crime and a young girl is found dead in a lake somewhere in the north. You have two depressed detectives – one is an alcoholic, the other is a woman with a father complex – and they start to investigate. This has become our identity in TV. But in the last five years, there has been a bolder approach.”

With Game of Thrones now coming to a close, Hivju says he keen to do more writing, which is what gave him a route into acting in the first place. “When I understood the nature of writing, it gave me the possibility to improve the project I’m working on,” he says. “That didn’t happen on Game of Thrones – I didn’t change a comma on that. But very often it’s nice to have the ability to write your own lines or be a good dramatist so you can understand that you’re telling a story, not just saying your lines. You try to make the whole work.

“I’ll continue to write and look for great parts. Twin has been a new perspective for me because we’ve been working on it for so long and I really wanted to do it. It was a purely dramatic role and a lead so for me, I’m very happy.”