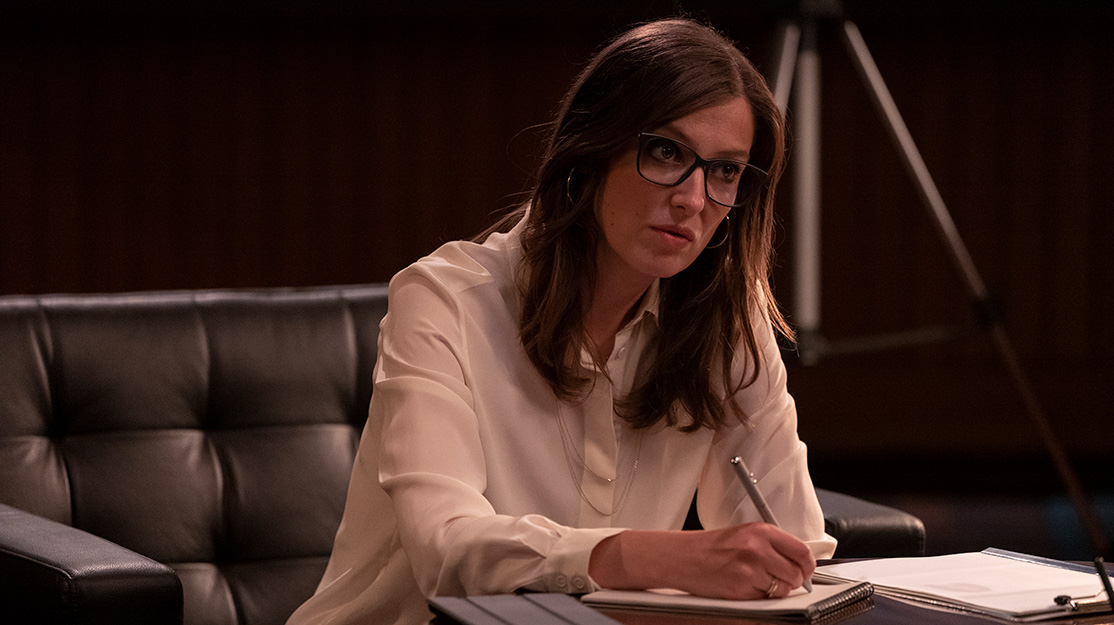 In Treatment meets Mindhunter in German drama 8 Zeugen (The Witnesses), in which a memory scientist questions eight people over the kidnapping of a young girl. Producers Christian Rohde and Viktoria Barkhausen explain more.

In German drama 8 Zeugen (The Witnesses), the daughter of a prominent politician is kidnapped during an outing to the Natural History Museum. But viewers don’t see the event as it unfolds, nor are they shown what happened through flashbacks.

Instead, they must follow the interrogations of forensic scientist and memory expert Dr Jasmin Braun after she is called in by the police to speak to eight key witnesses. One witness is questioned in each of the show’s eight episodes, as Jasmin slowly pieces together what happened to the girl and why she might have been taken. But are the witnesses telling her the truth, and how much of what they believe to be true is clouded by their own perspective or judgement?

It’s those questions that lie at the heart of the series, which is inspired by the work of real-life forensic psychologist Julia Shaw, who worked on the series as an advisor. In her 2016 book The Memory Illusion, Shaw explained why we cannot rely on our memories as accurate records of the past and how people sometimes adopt other people’s memories or even invent them entirely.

Jasmin must find out what each witness – including the nanny, a student and a museum worker – remembers of the abduction at the museum and pull apart fact from fiction as she comes under increasing pressure from the police to find the clues that will solve the case.

The series, which debuted in March this year, was one of the first fictional dramas to air on RTL-owned TVNow. Based on the work of Shaw, this crime story is given it a fresh twist thanks to the introduction of Jasmin and her specialist background, while creators Jörg Lühdorff and Christian Rohde were equally inspired by shows such as psychology dramas In Treatment and Mindhunter, and the multiple perspectives of The Affair. Most of the series sees Jasmin sitting at a table and breaking down the accounts – and often life stories – of the witness sitting in front of her.

“It had to be very balanced between crime and psychology,” Rohde tells DQ. “Having Julia on board was very important because she told us very often how she would never ask a leading question, like if you ask, ‘Have you seen someone on a bus with a blue shirt,’ you will remember someone with a blue shirt because the question leads you to this memory and not to the memory itself. She helped us a lot when we were writing some of the classic investigating questions and she said she would never ask it in a certain way way. That helped us immensely, so we did not fall back into cliché police questions like, ‘Where were you last night at 8pm.’ Overall, it was a tough process because this format consists only of talking and that is the toughest thing to write.”

The structure of the series was designed so each episode would feature Jasmin speaking to a different witness. But Rohde, who produces the series with Viktoria Barkhausen, was also keen that each episode could be self-contained as well as forming part of the larger kidnapping puzzle.

“Very early on, we thought if you see episode four, it should not be necessary for you to have to know everything that was talked about in the three episodes before, because that’s too much information,” he explains. “We were concentrating on single episodes and, at the end of each one, we had a cliffhanger that doubled as the core information you needed to jump over to the next episode. Then it starts again with a short recap. But hopefully it’s a series you can binge [from the beginning] because we also wanted short episodes of 20 to 25 minutes. This meant a lot of work in the editing process to find out what information was now vital to keep the viewers excited.”

“One further challenge was to create characters for each episode that would bring their own story and would be exciting to watch,” adds Barkhausen. “In the end, the series can be divided into two parts. Episodes one to four are short stories concentrating on the episode’s witness and closing with a cliffhanger. At the end of episode four, there is a huge plot twist, revealing a more complex background to the crime. From episode five, we start focusing on the serialised storyline that leads us to our grand finale.”

Front and centre in every episode is Jasmin, who serves as the audience’s guide through the police investigation and also shares her inner thoughts through the use of narration. The producers created a character bible for her, which built on a lot of details about Jasmin’s personal life that are then alluded to at various stages.

“Alexandra knew what kind of character Jasmin was but we figured out that the work with the witnesses takes up so much room in the series, the parts where we designed a character arc [for her] became smaller than we planned in the beginning,” says Rohde. “But the character we thought about most was Jasmin, who is not Julia. Julia commented a lot on the character, but it’s not her. We invented a new character who does what Julia does, so Julia helped us with how Jasmin works, thinks and reacts, and we put a lot of fictional drama on top.”

The topic of female empowerment is also important through the series. “We talked a lot about it and then it was really fun to create this character who is a female scientist, which is really rare in German TV and TV in general,” says Barkhausen. “We wanted our main character to be an expert female scientist who normally works in a male-dominated environment and who deals with a lot of prejudices and resistance. As an investigating character, the idea was for her to stand out and to be different from the police characters we are used to seeing on TV.”

That’s not to say that Jasmin and her methods are welcomed with open arms when this seemingly stubborn, determined and unemotional psychologist is first called to the crime scene. Initially, she doesn’t believe she should be there either, and the conflict that creates sets the foundations for her line of questioning to pick apart the witnesses’ first testimonies and find out what really happened.

“The main twist also has a lot to do with her personally,” Rohde says. “In the first half of the season, we find out how Jasmin works and how she asks questions in order to find the truth. In episode four, she plants a memory into the witness, which is hard but the case has to be driven further along. From episode five, we begin to discover there is something more than a kidnapping going on and we move closer and closer to Jasmin.”

The producers wanted to keep viewers coming back to the series to hear from the next witness, which led to casting a range of different actors, from the experienced and well-known Groth to Farooq, who is popular among younger viewers thanks her YouTube channel.

The Witnesses’ relatively small budget also affected how it would be developed and produced, with Rohde intent on making a series that would stand out among its international peers. As a result, the production invested time and money into its studio set, the actors and the scripts. “It was a big puzzle for two years working on the series,” he notes.

The show was filmed in the restaurant of a building in Berlin, which production designer Lars Lange (Deutschland 83) transformed into two separate areas: the police base and a library where Jasmin meets the witnesses.

“We planned all these logistics and then the coronavirus came along, but the situation was pretty manageable for us because we always had a controlled set,” Rohde explains. “We had to split the shoot up more than we wanted to, because originally we wanted to shoot chronologically, and this no longer worked as we had to separate the scenes where actors came close to each other, so these were shot in quarantine right at the beginning. The set design was a lot of work. We spent months looking at 3D modelling and asking ‘How can you move [the camera] while staying in one place?’”

The solution to that problem was found in filming in 4K. As the series was delivered in lower-resolution HD, it meant they could move around the picture without affecting the final quality, ensuring the camera never stayed still for long despite the background rarely changing.

“We also worked a lot with colours so each episode has its own colour, which should be related to the witness in that episode,” Rohde says.

Barkhausen adds: “Choosing set decoration and colours was all about emotions, atmosphere and perception. We discussed which angles should feel warm and comfortable, which ones create an atmosphere of tension and fear. That was also very important for our director Jörg. The overall atmosphere in the library should be calming and trustworthy compared with the police room, which is filled with tension – cold and crowded.”

Head writer Lühdorff, who penned the scripts with Janosch Kosack, also directed every episode. Each instalment required a great deal of planning and rehearsal, but the production team found that while rehearsals went smoothly, recording the series didn’t work in the same way because of the amount of shooting that had to be done. Filming would stretch to up to 15 pages a day over the 32-day shoot, which Rohde compares to making a high-end limited series at the pace of making a daily drama.

“It was a really tough experience. It was mainly about the budget and the time,” the producer says. “It was simply on the edge of how many minutes you can shoot every day with the ambition we had. Alexandra had the toughest job. She had to learn 10 to 15 pages every day. The actors playing the witnesses came for three, four or five days, maybe not in a row, but Alexandra had to perform every day and with a lot of text.”

“Some takes were 15 minutes long, with no breaks or changes,” recalls Barkhausen. “The acting is so much more intense due to these circumstances, which was great to see.”

Distributed by Fremantle, The Witnesses will air later this year on RTL’s linear network Vox, and while nothing has been confirmed in terms of a second season, Rohde can already imagine further stories following Jasmin in a similar chamber play-style storyline.

“The idea was to bring the viewer a new perspective on complex topics like memories, but we did not want to act like a teacher,” he says. “TVNow was interested in this series because everyone has memories and there’s an aspect no one really thinks about: there is no memory that’s completely true. To put this into a crime plot and have and exciting investigation and learn something about yourself, this was what we wanted.”