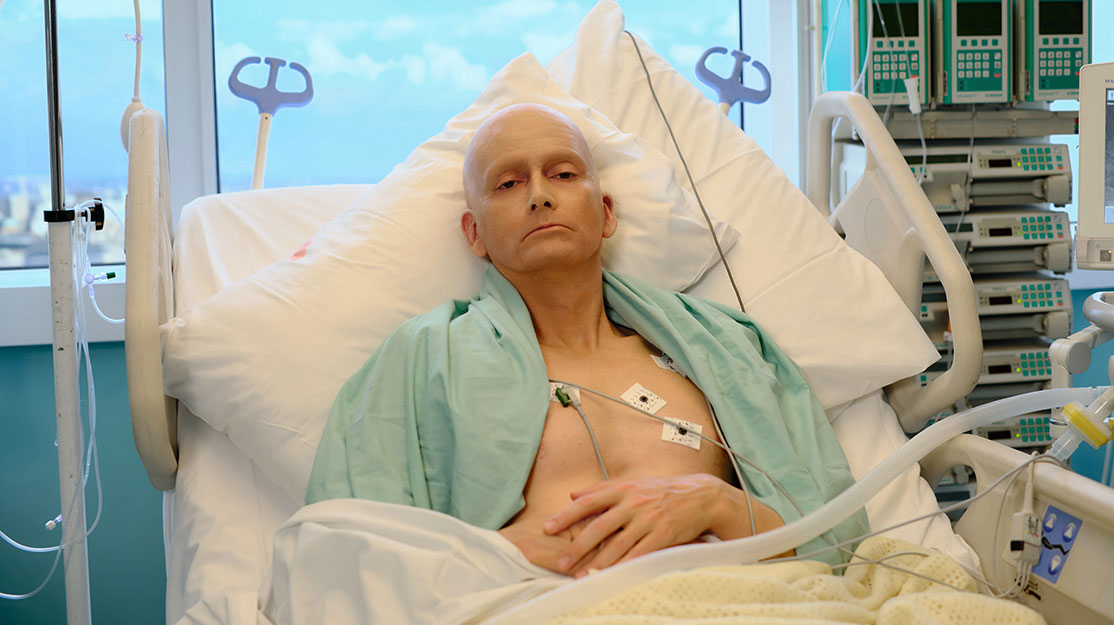 Litvinenko star Margarita Levieva and director Jim Field Smith outline how the miniseries explores the poisoning of Alexander Litvinenko and explain how they sought to honour the real people involved.

From the now-famous image of Alexander Litvinenko lying in his hospital bed to the conclusions of a government inquiry that he was “probably” poisoned by order of the Russian state, the story of how a Russian defector became a witness to his own murder is shocking yet familiar one.

Now, however, four-part drama Litvinenko looks set to shed new light on the case, exploring how determined police officers sought to prove who was responsible while Litvinenko’s fearless widow, Marina, fought tirelessly to persuade the British government to name her husband’s killers and acknowledge Russia’s involvement.

“The audience think they know what the story’s about,” says director Jim Field Smith. “But actually, we wanted to take them on that journey and show them that maybe there is a lot more to it than they think. There’s a more human aspect to it than you might expect.”

Litvinenko, a former Russian Federal Security Services and KGB officer, died in 2006 after coming into contact with a highly radioactive substance called Polonium-210. But before he passed away, he told police officers he had been poisoned by individuals acting on the orders of Russian president Vladimir Putin.

The series, commissioned by ITVX, opens as two officers are called to a hospital to interview Litvinenko – who was known as Sasha – and sit at his bedside to hear in meticulous detail about the events that led to his ill health and that he knew would prove fatal. His information ultimately helped police identify two Russians who had poisoned him with Polonium, in what would become one of the most complex and dangerous investigations in the history of the Metropolitan Police.

Starring David Tennant (Doctor Who) as Alexander Litvinenko and Margarita Levieva (The Deuce) as Marina, the cast also includes Mark Bonnar (Catastrophe) and Neil Maskell (Small Axe) as Scotland Yard officers Clive Timmons and Brent Hyatt, respectively. It is produced by ITV Studios, Tiger Aspect and Nordic Entertainment Group, which will air the drama on its Viaplay streaming service in the Nordics, the Baltics, Poland and the Netherlands. ITV Studios is handling international sales.

Litvinenko is the latest collaboration between writer George Kay and director Field Smith, who have partnered on Netflix procedural Criminal and upcoming Apple TV+ thriller Hijack. For several years, they had been tracking real-life stories with a view to dramatising them for television, especially those with deeper political and human elements.

Field Smith remembers the Litvinenko case from 2006 and how, over many years, more information came to light, while other similar incidents, such as The Salisbury Poisonings, have since occurred. But it was Richard Kerbaj’s documentary film Hunting the KGB Killers that raised the possibility of turning Sasha’s story into a TV drama.

“Without Richard’s support, we wouldn’t have had access to the story and the real-life players in the story,” the director says. “Having access to Marina and having her trust, and then having access to Clive Timmons, who ran the investigation for the Metropolitan Police, and Brent Hyatt, who was the first person to interview Sasha, gave George the route in because it became apparent that everyone feels like they know the story.

“It would be very easy to make a quite sensationalist drama about this and the Cold War, East-vs-West spy aspect of the story. But for us, that doesn’t need amping up. When you make a factual drama and you actually have the real people involved in consulting on the show, you feel a huge duty of care to those people but you also feel a responsibility as filmmakers to be authentic and tell the truth. For us, it was about how to tell the story through the eyes of the humans involved.”

The two threads of the story are both based on first-hand accounts and available evidence, with episode one drawing on the police interviews with Sasha. Over the course of the four episodes, the story shows how the police investigation grows, coupled with the threat of a huge public health risk on the streets of London.

The police angle is then supported by a focus on a family that is grieving the loss of a husband and father, and their growing concerns for their safety as Marina pushes the British government into pursuing the case on a political and diplomatic level.

“It’s a wide-ranging story, starting with the immediate aftermath of Sasha’s poisoning in November 2006, and it finishes in 2013/14,” says Field Smith. “So much has happened since then and today, almost 10 years ago now, and yet the story has only become more relevant. It’s obviously shocking how far Putin’s power has increased and how much he’s continued to carry out these acts, but also how Marina was able to convince the European Court of Human Rights to call it an unlawful killing.

“It’s been hard to tell that story in four episodes, because you basically can’t. You can only really scratch the surface of it. That’s why ultimately we focused on the human side of it more, because it is too much to try to unpack years and years of political and social culture that has led to this situation.”

As Sasha, Tennant “looms large” over the series, despite the death of his character kick-starting the story. But the story is not just about Alexander Litvinenko. In episode one, “Marina is almost in the shadows because she’s allowing her husband to have this moment,” Field Smith says. “Then once Sasha dies, Marina feels empowered to take on his story and to not let his words die. Margarita becomes the heart and soul of the show from that point forward. You could argue that the show is about Marina and [their son] Anatoly as much as it is about Alexander.”

Marina, says Levieva, is a devoted wife who loves her husband and goes on an extraordinary journey to ensure the people responsible for his death are brought to justice. The actor, who was born in Russia but lives in New York, was “shocked yet not surprised” when she first heard about Sasha’s death and believes the story of Sasha and Marina is one that needed to be told.

“I was terrified,” she says of the prospect of playing Marina, particularly after learning how involved the real Marina was in the project. “A whole slew of negative thoughts went through my mind, but she just couldn’t be more lovely. She was so happy I was playing her and we also found out we had some personal connections – we’re both dancers. She was really generous with me.”

The two women first met on Zoom, before Levieva came to London and they shared a walk together through the capital’s Hyde Park. “It probably wasn’t until our second meeting [in person] that I started asking more questions about that time, Sasha and everything that’s happened since,” Levieva continues. “She was very open with me and very generous. The biggest thing for her – and what drove me in playing this part – has always been that her job, her purpose at this point is just to get this story out to as many people as possible.

“When I was playing her, that was her goal, her desire, and I was mainly focused on that and on honouring her, which also felt terrifying. I really fell in love with her as a human being and wanted to give everything I could to honour the type of woman she is. She is a magnificent human being.”

Playing a real, living person for the first time, Levieva was conscious not to let her performance descend into impersonation and instead looked to adopt just some of Marina’s physical qualities, such as her walk and posture. Working with Field Smith, she found her experience on set very “freeing,” as the director’s use of a documentary-style handheld camera meant she could live in the space on set and not be restricted by the need for close-up or medium shots.

“Having seen the work I’d done, he trusted me,” she says of the director. “That was huge for me and allowed me to not stress too much. But I still did, because I was nervous about honouring Marina. That was my biggest goal in this whole thing.”

Field Smith agrees that Levieva’s performance was about more than simply impersonating Marina. “It’s about a cultural understanding,” he explains. “To have someone who is able to access that was just priceless because we’d always said the physicality of the characters doesn’t really matter.

“It was important that we recreated Sasha’s appearance in the hospital scenes, because that is the image of the case that is seared into people’s retinas. We tried to be as authentic as we could in telling the story visually, but it was more important for us to find people who could embody the characters as people, rather than what they look like. Margarita definitely shares some physical characteristics with Marina, but she shares more non-physical characteristics, and that’s why her portrayal is so effective, because you care about her so deeply and you believe she has this fighting spirit inside her. That’s Margarita and that’s Marina.”

Aside from the “brazenness” of the way Litvinenko was poisoned, Field Smith says the most remarkable part of the story is the fact he was a witness to his own murder and could give the police all the details they needed to catch his killers before he died.

“Because he was still alive, they were able to identify [the poison] as polonium; and because it was polonium, they were able to identify that it is manufactured only at state facilities in Russia,” he says. “In doing so, they left giant footsteps everywhere, which the police were able to trace very effectively. Everyone thinks they know the broader details of the case but, when you get into the actual granular detail of it, it’s absolutely mind-blowing what’s been perpetrated.”

As for Levieva, she hopes viewers watching the series on ITVX – it launches on the streaming platform this Thursday – will discover the truth of what happened and that the show means Sasha’s story continues to be shared.

“When Sasha died, President Putin came out and said the letter Sasha wrote to be read out after his death was most likely fake,” she says. “Then he said, ‘Who is he, Lazarus?’ What Marina said to me is that every time his story is told, Putin is wrong. He is Lazarus, because he’s still telling his story. I hope this story is seen by as many people as possible.”