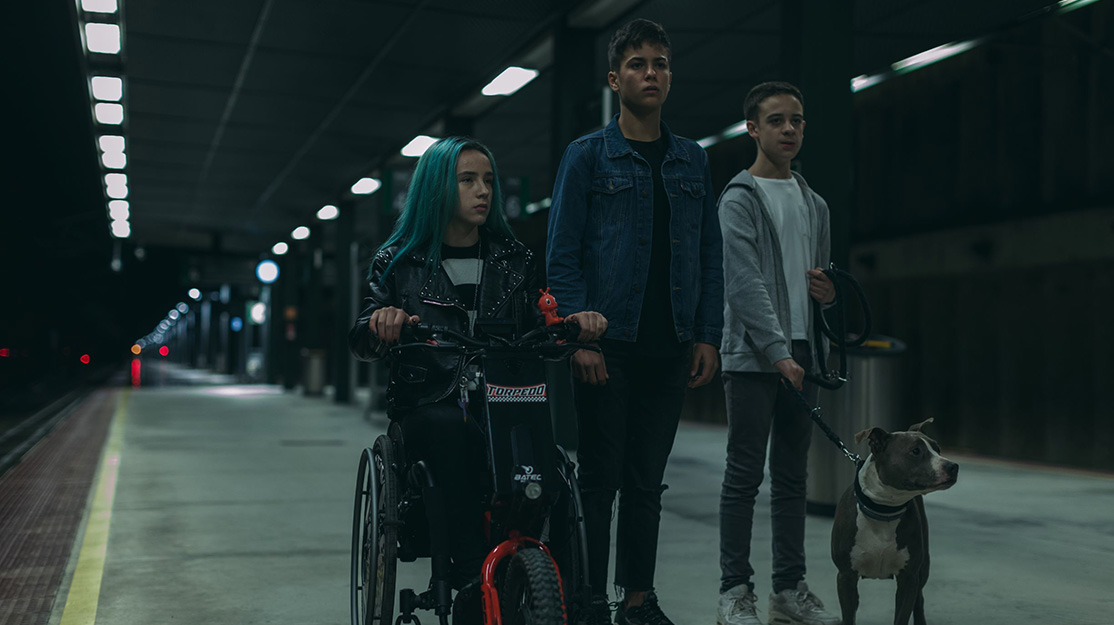 In Los Espabilados (Alive & Kicking), the latest series from Albert Espinosa, four teenagers are pursued by a detective after they escape from a psychiatric institution. DQ chats to the prolific Spanish writer about why he continues to mine his own experiences for television.

Spanish screenwriter Albert Espinosa’s breakthrough series Polseres Vermelles (The Red Band Society) was borne out of personal experience. The 2011 drama, since adapted in the US, Germany and Italy, followed child cancer patients learning how to cope in the world. Its origins lie in the fact that Espinosa himself was diagnosed with the disease aged 14 and spent 10 years in and out of hospitals. By the age of 24, he had lost a leg, lung and part of his liver to the illness, but discovered much about the will to live and the power of friendship from his fellow cancer sufferers.

However, there was another group of children in the same hospital, in the ward above him, who interested Espinosa even more. This ward was where the ‘espabilados,’ or children with mental health problems, were admitted for treatment.

“There were kids there with mental difficulties. They would escape and there was a detective who used to go looking for them. I thought they were fascinating,” Espinosa tells DQ. Indeed, he was so intrigued by these children on the autistic spectrum that he preferred their stories to his own. He wrote a book about them – What I’ll Tell You When I See You Again – and tried to sell it to TV producers, but instead they wanted to know about his missing leg.

“When I told them about me having cancer, they were much more interested in that idea. So I said, ‘Right, I’ll just do this one first,’” Espinosa adds of how The Red Band Society came about.

Now, Espinosa has finally brought to the screen the characters that first inspired him to become a TV writer. Los Espabilados (Alive & Kicking), which launched on Spanish streamer Movistar+ at the end of January, follows four inpatients who escape from a children’s psychiatric institution, and the detective tasked with retrieving them. Espinosa drew on several influences for the show, including the mental health themes in One Flew Over the Cuckoo’s Nest and the coming-of-age rebellion present in Stand By Me and French classic Les 400 Coups (The 400 Blows). But his biggest inspiration is what he witnessed as a young cancer patient.

To help tell the story, Espinosa has his characters break the fourth wall, allowing the protagonists to speak directly to the audience. “Every main character addresses the camera, even the detective chasing them, who has never stopped being a lost child,” the writer explains. “The psychiatric patients I’ve met along the way talk to themselves when they’re heavily medicated and I wanted to show this, but I also wanted to use it creatively for the series. Kids breaking the fourth wall is something you don’t see enough of. I love it in series like House of Cards and I wanted to replicate it with children.”

Espinosa was also very keen to reflect the children’s carefree side, which meant casting not just good actors but “good people” who would form a bond with each other. He sees the series as “kids being kids,” something he feels should be more common on TV. As such, he felt it was important to cast actors aged the same as their characters.

Another of Espinosa’s aims was to change the way people like the characters in the show are perceived. “I don’t see the subjects of the show as having mental difficulties. Aren’t we all mad sometimes?” he says. “With The Red Band Society, we changed laws and we changed the perception of child cancer. I really do want to change things from here, for us to help these kids to do more than survive. I think these people are actually enlightened because their brain has had to struggle with much more complicated ideas, and at a different speed. These kids are canaries in a coal mine and they’re telling us something’s wrong.”

Unlike The Red Band Society, which unfolded entirely on a cancer ward, only the opening episode of Alive & Kicking is set in a hospital. “If Alive & Kicking had been set in the institution, it would have been hard to explain what the children feel and need,” Espinosa says. “In the outside world, they steal cars and go on boats and planes – it’s a real journey. As we see the kids interact with the world, we also see the problems they encounter.”

The experience of the child characters in the show – produced by Movistar+ and Dynamo Audiovisual and distributed by Beta Film – matches how Espinosa feels the world sees them – they are either ignored or abused by the adults they meet. The only people who help them are pensioners, another section of society that Espinosa says is either forgotten or treated as mad. Through this, the writer says he wanted to connect with downtrodden demographics. However, he notes that coronavirus lockdowns have helped the series resonate with a much broader spectrum of people than he initially expected, with viewers around the world experiencing a type of incarceration.

“People have really identified with the confinement in the series,” he says. “We all dream of getting out right now and viewers have told me they identify with these kids more than ever.”

Since his recovery from cancer, Espinosa has written 10 books, which have been translated into 42 languages, and he says writing his experiences in book form before taking them to the screen has been fundamental to his success. “I always try to use books as a testing ground. The intermediary stage is very useful,” he notes. “For such personal stories, you need some sort of filter before bringing it to TV.”

The book version of Alive & Kicking differs in several ways from the series, focusing much more on the detective’s point of view than that of the children, for example. “For a writer, there’s no fun in writing the same story. I like to delve into other points of the plot,” Espinosa explains. “The real-life detective was a very sympathetic character, so I focused on him in the book. Also, back then, I couldn’t tell my friends’ stories without their permission, so that changed with the series.”

Despite books and theatre being a creative stepping stone, Espinosa feels television is still the fastest way to educate people. If someone wanted to make the world love chess, he says, all they would need is Netflix’s The Queen’s Gambit because TV simply reaches a greater number of people than other media.

Fans of his novels will also notice that each episode of Alive & Kicking is named after one of his books. According to Espinosa, this is a way to get around “boring” episode titles in series. The title of the first episode, Love Your Chaos, sparked a tattoo trend upon its release as thousands of people inked themselves with the original phrase in Spanish, Ama Tu Caos.

Meanwhile, when it comes to production, Espinosa takes a hands-on approach. “I often end up writing everything and, as exec producer, I saw nearly 5,000 kids for casting too,” he reveals. “But the most important thing was to get a director who really had a way with the kids and who understood what we were trying to represent.

“It was also very important to me to have one director for seven episodes, as I felt the kids worked better if they built a relationship. I need to have a relationship with them too – Alive & Kicking director Roger Gual and I have gone to the same swimming pool for 10 years. For 10 years, we talked about collaborating, and then one day I gave him this script.”

Espinosa feels comfortable letting directors like Gual take control on set but is insistent on being involved in post-production. As he says, anything can be changed in the edit suite. Even the music is a carefully curated mix between wistful orchestral pieces and the dramatic irony of tracks like Talking Heads’ Psycho Killer. This, says Espinosa, is to reflect the up and down nature of characters’ mental state.

As someone who likes a lot of creative control, Espinosa is also satisfied with the experience of making content for a streaming platform, in this case Movistar+. Shooting for the series wrapped in December 2019, so the only part of production affected by Covid-19 was the release date. Happily for Espinosa, though, the series debuted on Movistar+ on the 10th anniversary of the release of The Red Band Society, something that he views as “perfect.”

“I always wanted each Alive & Kicking episode to last 25 to 30 minutes, which would have been impossible on linear TV,” he says. “I’ve been wanting to make this series for years and haven’t been able to until now. It also means you don’t have to be writing in a cliffhanger every week. Basically, it makes you freer.”

Alive & Kicking is among the series selected for the Berlinale Market Screenings during this week’s Berlin International Film Festival. And even though season one has only just been released, season two has already been given the green light, with an expected release in January 2022. There will be no third season, however.

“I think even the biggest fan of a show can lose interest by the third season,” says Espinosa. “That’s why I like to keep my series short.”