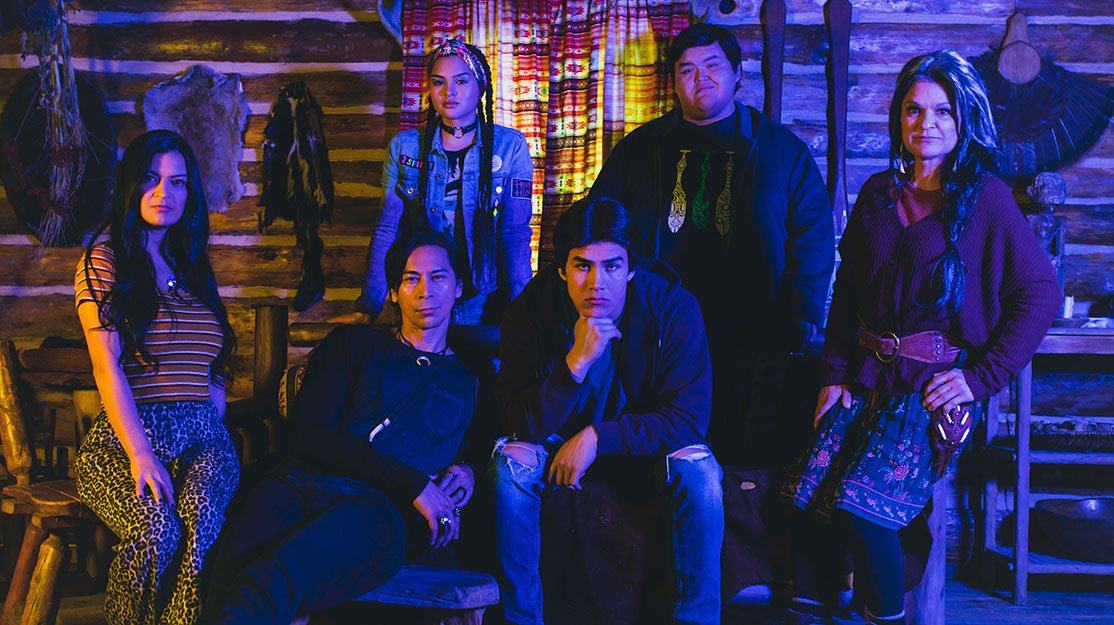 Tricks of the trade

Eden Robinson’s novel Son of a Trickster comes to television in a six-part supernatural drama commissioned by Canada’s CBC.

Trickster stars Joel Oulette as Jared, an Indigenous teen struggling to keep his dysfunctional family above water, holding down an after-school job and selling ecstasy to support his partying mum, Maggie (Crystle Lightning), who self-medicates an undiagnosed mental illness, and his unemployable dad, Phil (Craig Lauzon), and his new girlfriend. But when Jared starts seeing strange things – talking ravens, doppelgängers, skin monsters – his already chaotic life is turned upside down.

The series was created by Tony Elliott (Orphan Black) and filmmaker Michelle Latimer, with the latter also directing all six episodes. Sienna Films and Streel Films produce the show, while international sales are handled by Abacus Media Rights.

What were the origins of the series?
Kawaja: While visiting her parents’ home in Thunder Bay over a Thanksgiving holiday trip in 2017, Michelle read Eden’s Son of a Trickster and immediately knew she wanted to option it. However, when Michelle enquired about the rights to make a film or television show based on the novel, she found herself competing with bigger production houses for the rights, which caused her some frustration as an Indigenous creator trying to option an Indigenous work.
Michelle brought that up with me over dinner, and I offered Sienna Films’ partnership to help secure the rights. Michelle’s company Streel and Sienna entered into a 50/50 partnership with a commitment to prioritise meaningful Indigenous participation in front of and behind the camera, in every aspect of production.

How was it developed with the CBC?
Kawaja: We were worried that no one would want to develop it because while it was a very relatable family drama with supernatural elements, it was also filled with swearing and hard-living characters. But we had interest immediately, because none of it feels gratuitous and people fall in love with the characters as soon as they read the books. CBC approached us when they heard we had the rights. The process was swift, with Michelle and co-creator Tony Elliott collaborating on the first two scripts in fall 2018 and the series greenlit in spring 2019 in advance of a fall 2019 shoot.

Do Eden Robinson’s novels lend themselves to a screen adaptation?
Latimer: The novels are really incredible, with characters you immediately love and empathise with – even if their behaviour is difficult – and these beautiful and authentic relationships are the heart of the TV series. Eden immediately said, “I wrote the book; you make the show.” She was fully happy for us to make the television series our own. We did take it to some different places than the book and we hope that fans of the book love where we’ve gone.

Why was this a story you wanted to tell on television?
Latimer: I personally never saw my community represented on television when I was younger. For Trickster, I wanted young people to see a contemporary representation of themselves, and an ongoing series felt like the best way to reach that audience and to give Eden’s books, which are complex and intricate, the time they needed to be realised.
I wanted to say some things about colonisation and how it has affected families intergenerationally. I recently saw [Netflix’s Norwegian series] Ragnarok and thought there were similarities. Although it has an entirely different sociopolitical context, it was great to watch that interplay of family drama and the supernatural.

What was the writing process behind the series?
Kawaja: The writing room took place in early spring 2019 and, in addition to Michelle and Tony, included co-executive producer Penny E Gummerson, consulting producers Zoe Leigh Hopkins, Shane Belcourt and Danis Goulet, creative consultant Chris Roberts and story editor Amber-Sekowan Daniels.
Latimer: Like on many serialised shows with short seasons, the room was fairly short and creatively intense, and then a lot of writing continued outside the room as well. We tried to ensure the environment felt collaborative and that we built a space where everyone could be heard. Because we had two scripts completed when the room began, we were focused on building from that point to the end of the season, and it was really inspiring to work with so many great writing minds on figuring that out and on drafting the scripts, which we then worked on as a complete season to ensure everything felt like the same voice.

How did you want to present the supernatural elements of the story?
Latimer: The origins of the supernatural elements in Eden’s books are in traditional Indigenous mythologies, so we always wanted to pay homage to those stories and traditions in how we were bringing those things to the screen – in the writing and then visually once we got into production, special effects and VFX.
The show is a great mix of coming-of-age and fantasy – it’s funny, poignant and irreverent, even romantic, while also having suspense and scares. It also tries to resonate the importance of the land to Indigenous communities and the struggle over the land that is taking place with resource extraction and how it is dividing communities.

Where was the series filmed and how did you use locations in the story?
Kawaja: The show was filmed almost entirely on location, with only a handful of key interior sets built in a studio. Filming began in Kitimat and Kitamaat Village, British Columbia, for five days. We were honoured to be welcomed and hosted by the local community and by the Haisla Nation into their territory. We then continued for the majority of the shoot in Northern Ontario, with shooting in North Bay, Astorville, Redbridge, Powassan, Mattawa, Nipissing and Callander, with the participation of the Nipissing First Nation, Mattawa Nipissing Métis and Antoine First Nation.
With carefully selected shooting locations and the use of ‘plate shots’ – location shots without any characters or action in them – and establishing shots taken on location in British Columbia, the Northern Ontario locations are able to match the novel’s gorgeous Kitamaat location.

What were the biggest challenges you faced in development or production?
Latimer: The biggest challenge on Trickster was probably in post-production, when Covid-19 shut down the industry and the world. We were lucky we were well into post and it was possible to continue – albeit with a lot of adjustments – and we have so much empathy for productions that were shut down during their shoot or in prep.
We did all the sound work via the internet and the same with the VFX, which was really difficult. The sound was done in passes and then fixes were done in separate passes as well because only one person could go into the studio at a time. The VFX folks at Rocket Science started to look grey because they never left their basements!

How do you intend to continue the Trickster story beyond season one?
Latimer: Luckily, we have two more books from Eden to continue to inspire us in new directions. I am just in the midst of finishing detailed outlines for all six episodes, drawing from the work done in the season two room and from the books, and now the scriptwriting will begin. In season two, Jared finds himself in a big city but slowly the drama draws him back to Kitamaat Village.

Tell us about your commitment to Indigenous participation.
Latimer: The source material has almost completely Indigenous main characters and we wanted the series to have the same. Everyone was on the same page about that from day one. I was really committed to giving new actors a chance to shine and to show the breadth and diversity of Indigenous acting talent. I could not have asked for a better, more talented group of actors who embodied the characters.
We took a two-pronged approach to crewing. The first was to recruit Indigenous crew members with film and television experience to work in as many departments as possible, and the second was to create meaningful, paid training and mentorship opportunities on the production to provide barrier-free opportunities for emerging Indigenous crew and artists to gain experience and exposure to a large-scale television production. We used a significant amount of money from the production budget to finance the programme, and hope, in future seasons, to involve external financing so that we can continue and grow the programme.

What more needs to be done to ensure true representation in front of and behind the camera?
Latimer: Trickster marks the first time an Indigenous book has been adapted with an Indigenous team for the CBC, which is shocking, but we give them credit because they trusted us with this material, which is fairly provocative. I hope there is power given to more creators – power to have a real voice.
Everyone wants diversity, and now everyone is looking around for diverse artists to make that happen. But it’s hard to do all that work on top of making your own art, and we need to see more than hiring diversity and emerging mentorship programmes. Where we need to work towards is having more diverse creators and showrunners who have actual control – copyright and ownership. We are at the phase now where lots of Indigenous people are behind the camera making work that’s globally recognised. We’re ready for that next phase.

Why would the series appeal to audiences around the world?
Latimer: This is a show about family relationships and growing up, with all its surprises and heartbreaks. That’s universal, whatever community or country you come from. Telling that story through genre, through fantasy, is a tradition that has sustained through from classical literature to today – it works on us all, viscerally. This show takes that tradition and puts its own spin on it, from an Indigenous perspective.