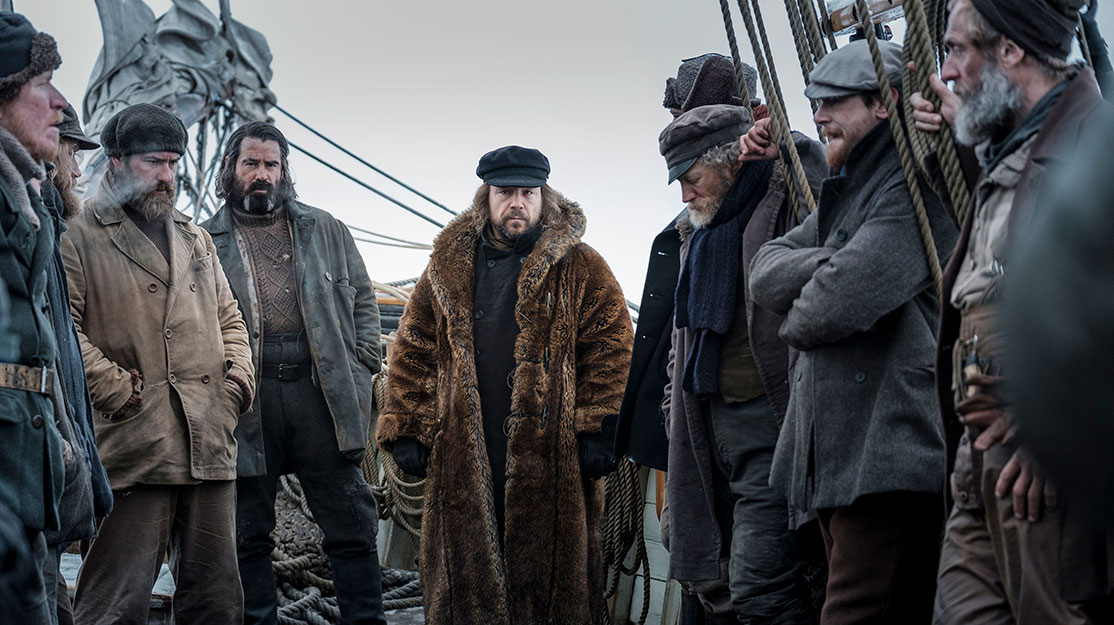 The cast and crew of The North Water reveal their perilous experience filming scenes in the Arctic for this story of an 1850s whaling expedition, written and directed by Andrew Haigh.

Colin Farrell holds his head in his hands as he slumps on the table and admits: “You’ll have to bear with me, I’ve not had much sleep.” He pauses. “I’m on my knees.” He looks it.

He’s in a Budapest studio, almost at the end of one of the most challenging shoots of his career. Not only did it involve a physical transformation that makes him almost unrecognisable, but it also took him to the far north of the planet for one of the most ambitious five hours of television ever made.

The North Water, based on the novel by Ian McGuire and launching on BBC2 tonight, was, the producers believe, filmed further north than any drama before it at 81 degrees north, just 500 miles south of the pole. To create the stunning series, written and directed by Andrew Haigh (45 Years) about a disastrous whaling trip in 1859, the producers took a crew and cast of 100 people to live on three ships over a four-week period for a unique experience.

“Putting the whole thing together was like wrestling an octopus,” says producer Kate Ogborn. “But from the start, Andrew kind of planted his flag, saying it had to be a real ship and we had to film in the ice. That was a kind of amazing challenge that made it very exciting.”

First a ship had to be found. The Activ, a three-masted wooden schooner built in the 1950s in Denmark and, crucially, fitted to work in the ice, was the only boat that would do as The Volunteer, where most of the action takes place. The ship, which has already appeared in TV show Finding Home and a Moby Dick film, had to sail to Canada for initial filming and be fitted out to look like it was two centuries old. Then it sailed to Svalbard in Norway, where it was joined by the cast and crew, an icebreaker and a third ship to take this incredible production to sea.

“Because we were filming on ice, we had to be entirely marine-based,” says Ogborn. “It was not a small thing for a crew and this calibre of cast to agree to come and live on a boat for more than four weeks in which they cannot get off, but people believed in the project, they believed in Andrew and they knew they were in for an extraordinary experience.” They certainly had an experience none of them will forget.

Produced by See-Saw Films and distributed by BBC Studios, the five-part series is told through the eyes of doctor Patrick Sumner, played by Jack O’Connell. Sumner has fallen on hard times; we learn he was thrown out of the army and that he is addicted to laudanum, a type of opiate. He might have a murky past, but he’s an educated man with a strong sense of right and wrong, unlike the men he meets when he signs up as ship’s doctor on a whaling expedition to the Arctic – in particular Farrell’s character, the bloodthirsty whaler Henry Drax, who is genuinely amoral.

“It’s important to Sumner to maintain order,” says O’Connell. “When there’s a victim, he takes it on board as his responsibility to see that the perpetrator is punished. That lands him in Drax’s crosshairs – he’s the target of a lethal killer.”

Both actors are playing against type. This Is England star O’Connell’s Sumner is middle class, refined and appalled by the violence. Farrell (In Bruge, The Lobster), so often the charming heartthrob, put on three stone to play the physically and emotionally brutish Drax.

“I ate, I lifted weights and I ate some more and that’s all,” says Farrell. “Anyone could do it really, although I wouldn’t advise it. And that was it; you couldn’t take the costume off. He was always with me; I couldn’t step away from him.”

It was a dark costume to inhabit. “When I first read the script, I wasn’t sure about doing it – there is such a fundamental and essential darkness to this man,” he continues. “But the interesting thing about him is that he doesn’t live in that darkness; he’s the most burden-free character in the piece.

“He’s painted as a man of nature – and in some ways he is quintessentially Darwinian in that he’s fully engaged with the notion of the survival of the fittest. He’s an abusive creature of self-preservation.”

Added into the mix is Captain Brownlee, played by Stephen Graham, who is in command of the ship. He has one job, which isn’t what the others think he is doing. Alternative forms of fuel, other than whale oil, have by this time been discovered, while catching whales is more difficult than it once was – they have almost been hunted to extinction. The ship’s owner Baxter (Tom Courtney) realises he will make more money from insurance than whale oil and he’s come up with a plan for Brownlee to sink the ship. Sinking a boat in the middle of the icy Arctic – what could possibly go awry?

The obvious danger was all around for the actors and crew, despite help being just a helicopter ride away (at one point a member of the crew had a dental emergency and had to be picked up).

“The biggest logistical challenge was finding the right sort of ice that was big enough for us to work on but not so densely packed that once we’d entered it that we couldn’t get out,” says Ogborn. “One ship was an icebreaker but the other two would have struggled to get through and could have got seriously trapped.”

The producer would be up at 4am every morning looking at satellite images to find the perfect ice on which to work. “It was like going hunting each morning, and then finding the ice and mooring the ships on it, and then getting the equipment and monitors out and set up. Sometimes you’d forget you were in the middle of the ocean on a big piece of ice, but other times you would be reminded.

“At one point, a floe we were filming on split down the middle. We had part of the crew on one side and the other half on the other – equipment on both sides. We had to use the Activ, which was moored to one of them, to evacuate everyone.”

Actors are normally protected from the nightmares of producers, but not in this instance. “I know it sounds dramatic but the feeling of death was ever present,” says Farrell. “If any of us had slipped off an ice floe, it would have been seriously dangerous. Sometimes they would crack. We had spotters to look for polar bears; they were spotted about 10 times and we would have to get back on the boat until they’d gone. They’re beautiful, majestic creatures – but keep them away from me! They’re really stunning but also formidable apex predators.”

But Farrell didn’t shy away from some of the more challenging aspects of the job, including spending a day sailing the Activ as it made its way into the frozen waters north of the Svalbard archipelago.

“On the first day, Colin asked to become a crew member, so he got used to working the ropes, sailing the ship and doing the night watch,” says the Activ’s captain Jonas Bergsoe. “I had him as a crew member for the first 22-hour transport where we had the luck of beautiful winds and went up the coast at speeds of 10 knots. He wasn’t afraid to get dirty; he just grabbed the ropes, and he got quite good at them.”

The Activ’s crew also doubled as extras during the shoot. “It was important that you can have people who work naturally aboard a ship, so it made sense to have my crew – who 150 years ago would have been working on a whaling boat – doing the work,” adds Bergsoe. “The deal we made with the production was that nobody on board was allowed to shave or cut their hair for three months prior to the production, so they looked quite scruffy and authentic, of course.”

Of course, not everything was totally authentic – no animals were harmed despite the brutal depiction of death. For a bloody seal-clubbing scene, a mixture of CGI and prosthetics were used, while the production also involved a 30-foot-long prosthetic whale. “The whales they were hunting were bowheads, which are very, very long,” says Ogborn. “It needed a crane to get it on top of a container on the deck of our big icebreaker and it was then craned into the water and attached with ropes to The Volunteer for the scenes involving the whale.”

For all of the cast and crew, who were in Budapest filming shots of a mission cabin and scenes recreating the taverns and docks of Victorian Hull, the four weeks they spent in the sea will be something they will never forget.

“It was a once-in-a-lifetime experience to be somewhere that vast and beautiful,” says Graham. “Seeing polar bears in the wild was mind-blowing. The undertaking and the logistics also blew my mind. There was so much attention to detail, which allowed us to really appreciate what we were doing.

“For me, it was quite spiritual. The thing that got me was there was no birdsong. The silence was piercing. It was a strange place to be filming such a dark story; a story of greed and manipulation in one of the most breathtaking places on the planet.”