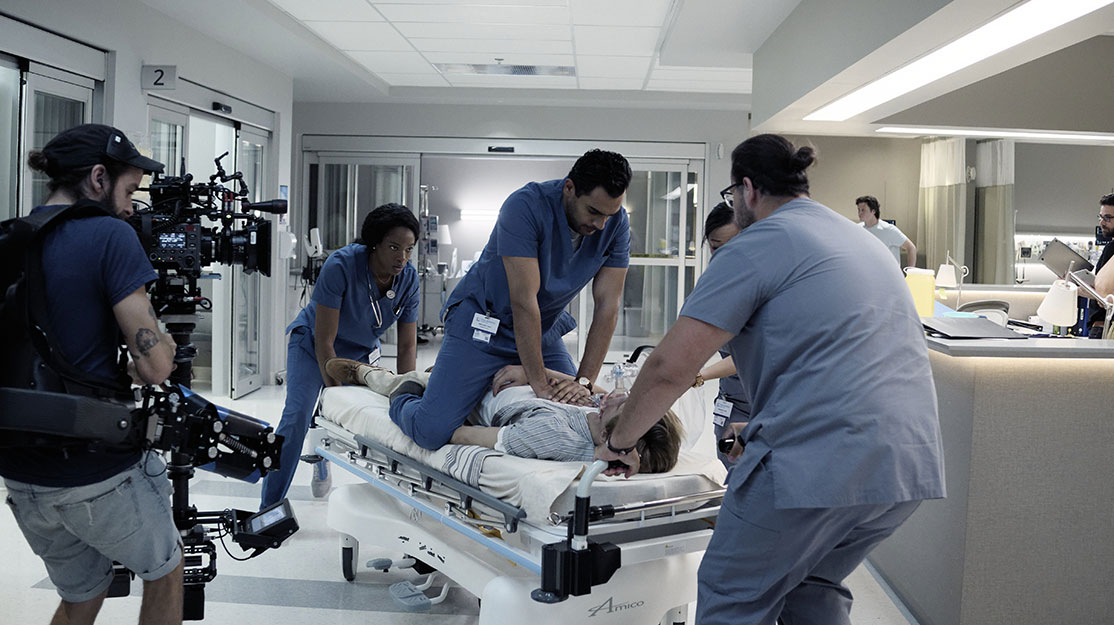 Transplant showrunner Joseph Kay previews the second season of the Canadian medical drama and explains how it finds authenticity in the story of a Syrian doctor and refugee working in a Toronto hospital.

When it came to developing the second season of breakout Canadian medical drama Transplant, a key question for creator and showrunner Joseph Kay was whether to reflect real life with a nod to the ongoing coronavirus pandemic.

The show, which became the biggest new Canadian drama since 2015 when it launched on CTV in February last year, tells the story of Dr Bashir ‘Bash’ Hamed (Hamza Haq), a talented doctor and Syrian refugee who fled to Canada with his younger sister and gets the chance to practice emergency medicine at York Memorial Hospital in Toronto.

Filming is now underway in Montreal on season two, later than planned thanks to Covid-19, but it was that delay that actually determined why the show will ultimately not feature the pandemic when it returns to screens.

“When we figured out what our broadcast schedule might be, we took a gamble,” says Kay, speaking to DQ while episodes nine and 10 of the 13-part season are in production. “We knew the earliest we’d be back on the air was going to be September 2021, so we decided collectively to be optimistic that we would on the other side of this [pandemic]. And if we are, I just don’t think people are going to want to go back to watching a show that toils in the nitty-gritty of it.”

Kay also felt that putting the characters against the backdrop of Covid would shift the focus of the show away from its premise – how Bashir is adapting to and overcoming the challenges he faces living and working in a new country. What the show does end up doing, however, is tackling themes associated with the pandemic through the stories of characters who feature in the series.

“Instead, we asked ourselves, how can we look at Covid themes with a little bit of distance to try to explore it in the show?” Kay explains. “So there are stories we tell about not being able to be there when a loved one passes. There’s been so much written about access to ventilators, so we found ways to tell stories about resources, or themes about how we think our lives are totally fine and then suddenly they’re not. We just tried to incorporate that into the storytelling while ignoring the virus.”

Kay’s writing and producing career has included work on shows such as legal drama This is Wonderland, cop series The Line, Second World War-set Bomb Girls, family saga This Life and hostage thriller Ransom. Transplant marks the first time he has worked on a medical show, but he says the genre is “an amazing playground for drama,” complete with built-in high stakes and human, relatable stories behind every medic or patient.

It’s Bashir’s story that runs through the heart of Transplant, however, with each episode focusing on this unorthodox, instinctive doctor, where he is in his life and how the opportunities or challenges he faces can be mirrored thematically by the experiences of his patients. There’s also a medical story for the deeply empathetic Bashir to become involved with in each episode, while the lives of his colleagues working at the hospital are explored as well.

“I’m proud to say we explore a family of themes – adaptation, assimilation, people feeling like they don’t belong, people learning to understand how they do, themes of starting over – that fall into the category of what Bashir is facing,” Kay notes. “On the medical side, the writers and I love that part. We have doctors on staff, which is incredibly fortunate.

“I grew up watching ER and I still think it’s just phenomenal. I don’t know how they did it before the internet, because right now you could name a medical procedural and I can find it on YouTube. There are ways to write it without the doctors, but you just dream up some crazy stuff that would happen and then get them to weigh in. Crafting that side of it is really fun, but the medical story only works if it’s an emotional story.”

Transplant’s origins can be traced back to autumn 2016 in the run-up to Donald Trump’s election as US president, when the topic of immigration had become a “weaponised, corrosive” issue that Kay found hard to escape thanks to the prevalence of US media in Canada. At the same time, there were local reports of Canada taking in a number of Syrian refugees, and Kay and his partners were interested in putting a human face on that story and wrapping it in the structure of a network procedural that could appeal to a wide, mainstream audience.

“It just came from wanting to contribute to that conversation, but not in a political way,” says the showrunner, who took part in a masterclass session focusing on Transplant during the Banff World Media Festival earlier this month.

“It’s different in every country but I started reading in Canada about the challenges that international medical graduates face when coming here. It turns out Canada has labyrinthine barriers to entry for medical students trained abroad, so it becomes a really dramatic underdog story that’s universally relatable. Then it becomes a question of how you can portray his story with as much honesty as possible. That’s the part we’ve always taken really seriously, really carefully and really deliberately in how we unfold the narrative.”

Haq, who plays the character, is a Canadian immigrant himself, born to Pakistani parents in Saudi Arabia, and has worked closely with Kay to build Bashir’s life from the early conception of the show.

“We never dramatise anything personal, cultural or religious in his life without taking the opinion of all of our contributors who can speak to it from personal experience,” says Kay. “Sometimes people from similar backgrounds end up having different ideas of what constitutes authenticity, and we want to foster these conversations in an effort to depict things in a manner that stays true and honest. It’s the number-one focus of ours. We put the capital ‘C’ in collaboration.”

The numerous story and production elements that make up Transplant mean producing the series “is quite a task,” the showrunner admits, though the development of each episode always begins with a discussion on where Bashir is in his life at that moment and what that could mean thematically for that instalment. The focus on the central character also lends itself to the visual style of the show: the camera is always with Bashir, either standing with him or filming from his perspective.

The size of the task continues to grow for season two as the world of the show opens up. “It becomes quite an orchestra, honestly, to marry the medical with the personal,” Kay says. “What that really means is 11 drafts of a script and then extensive meetings with the directors and everybody. But it’s what makes it fun, too.”

When the scripts for Transplant become a production reality, an inherent challenge of the genre emerges: how to film the medical scenes. “We put on lots of stuff on the page, such as people doing compressions on other people. But you learn right away that you can’t compress a live actor, you can’t intubate a live actor,” Kay continues.

“All of this stuff requires extensive prosthetics and lots of money spent on building dummies of duplicated people. For the writers and me, when you’re going to do something like that, it has to be earned dramatically. It takes money and a lot of people just to plan one medical sequence, so you learn to really earn the things you put in the script dramatically. If it’s not telling an emotional story or a human story, we don’t do it.”

With returning cast members including Laurence Leboeuf (Dr Magalie ‘Mags’ Leblanc), Ayisha Issa (Dr June Curtis) and Jim Watson (Dr Theo Hunter), season two picks up with Bashir, who is still finding his footing at the place he was starting to consider home until life was destabilised by events at the end of season one, when the hospital’s chief of emergency medicine (played by John Hannah) suffered a possible stroke. Unexpected faces from the past are also set to leave Bashir doubting whether his new life can be successful, despite his hard work, compassion and hopefulness to survive and thrive in new circumstances.

“I feel like it will always be his show,” Kay says of the lead character. “Will we take a diversion here or there and spotlight another character who winds up maybe getting more scenes? Yeah, that’s possible. But I still really want the audience, after every episode, to feel first and foremost that they saw a little piece of his journey, which also really informed the rest of the stories. He was a fully trained doctor at home. He’s come to Canada, where he’s starting his career off again. He’s at the beginning of a long, slow journey with lots of ups and downs. I feel like we can anchor that for as long as possible.”

Produced by Sphere Media and distributed by NBCUniversal Global Distribution, Transplant has won fans around the world after being picked up by NBC in the US, SBS in Australia and the UK’s Sky Witness, among other networks. Kay believes the show’s universal themes help it stand out, as does the unfamiliar protagonist at the centre of the medical drama.

“It allows audiences to look at it with fresh eyes from a fresh perspective that they haven’t seen before,” he says. “And although the specifics in his background are unique and different from many of us, what he wants and feels is relatable to all of us. That combination makes for an audience-friendly show around the world, and we’ve been really excited to see to see that happen.”