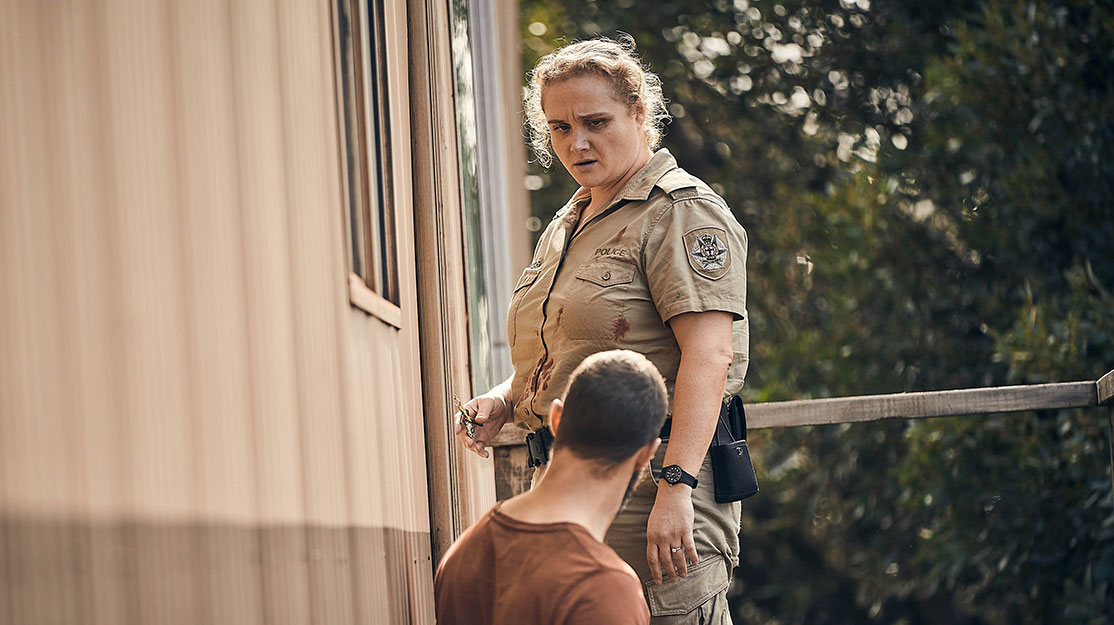 Australian actor Danielle Macdonald looks back on making outback-set thriller The Tourist and reveals how she moved to LA as a teenager to follow her acting ambitions.

Having previously played supporting parts in 2 Broke Girls, American Horror Story and Pretty Little Liars, Danielle Macdonald broke out with her first leading role in a series earlier this year in mystery thriller The Tourist.

She starred as police officer Helen Chambers opposite Jamie Dornan’s The Man, an amnesiac who finds himself being pursued across the Australian outback by menacing figures apparently from his past. Across six episodes that balance comedy and action, The Man must discover who he is and why people are trying to kill him.

Created by Harry & Jack Williams (Liar, The Missing), the series is produced by Two Brothers Pictures for the BBC, HBO Max in the US, Australia’s Stan and Germany’s ZDF. All3Media International is the distributor.

For LA-based, Sydney native Macdonald, landing a role in The Tourist gave her the chance to return home to Australia, while the global roll-out of the drama across 2022 has meant she could enjoy new audiences continually finding the show, which won best series at the Monte Carlo Television Festival’s Golden Nymph awards earlier this year.

Here, Macdonald speaks to DQ about watching the reaction to The Tourist, playing Helen, the trials of filming in the outback and building her career in the US.

How have you enjoyed seeing The Tourist air around the world?
It’s been really interesting because it came out in so many different places at different times. It’s also been fun to see people’s reactions, because I know that when I was filming and I read it, I was like, ‘Whoa!’ I wasn’t sure how people were going to react, so it’s been interesting to see what people think has happened. It’s so interesting how it can trigger so many different reactions, thoughts and opinions.

Did you get all the scripts up front?
I was in the dark a little. I got the first four before I signed on, and I signed on because I was like, ‘This is amazing.’ Then I got the last two after we’d already shot the first week. My mind was blown by the end and I was like, ‘What just happened?’ I was Face-timing Jamie and Shalom [Brune-Franklin, who plays Luci] and I was like, ‘Have you guys read this? This is insane.’

How did you decide how to embody Helen without seeing all the scripts from the off?
That was my worry, but they told me what happens as a general overview so I knew where my character went. I knew where to start, but she hasn’t really been on the journey yet when she’s at the beginning [of the series], so I just played that authentically to the place she was in at the time. Sometimes it’s good not having full knowledge because the characters themselves don’t have full knowledge of where they’re going to go. It was interesting for sure.

What did you love about those first four scripts?
I just couldn’t stop reading. I remember my roommate had just had her wisdom teeth out, so I was taking care of her, but I sat there for four hours straight and didn’t move because I was just absorbed in it. It captivated me straight away. I fell in love with Helen instantly; I feel like I understood her. My heart went out to her and I felt a bond with her. Then the script itself, it just kept me guessing the whole time, and then it made me laugh and it took me in a direction I did not think it was going to go in. That was really fun and surprising.

How would you describe Helen’s journey and how she is drawn towards The Man?
She is a character that has grown up in a small country town in the outback. She hasn’t really gotten to live life yet. She hasn’t been able to find her potential or live up to it yet because she’s always let others tell her where she should be or what her place is. Meeting The Man allows her to find herself while he’s discovering himself. Advocating for someone else helps her to also find her own inner strength, which is beautiful. They’re on a journey together, figuring out who they are, in a weird way. They complement each other really nicely and go on this journey of self-discovery, with very different results for each of them.

Did you speak to director Chris Sweeney or the writers about Helen?
I Instantly felt like I knew who Helen was. Then we did rehearsals on Zoom because there’s such a specific tone. That was the first thing I wanted to ask about, because I feel like that tone sets the mood for the whole thing, and all the actors have to be in the same tone. Then Jamie and I hopped on a Zoom and we read a scene together. It was actually really cool to read opposite Jamie – it clicked in a way that meant we understood each other’s characters, because [previously] we’d been doing the individual work. It also gave us confidence when we came to Australia to know that we already knew where we were going with it.

What was it like going back to Australia to film the series?
I’ve only ever worked in Australia once, and it was only for maybe three or four weeks, so this was actually very special. I hadn’t spent that amount of time in Australia since I moved when I was 18 – I was there for almost six months, which is crazy. It was also interesting because even though filming in America is different from Australia, it also felt like home, and being around an Aussie crew felt so familiar to me, even though I hadn’t really done it before.

And being on set in the outback?
It’s like camp in a way. Everyone goes out to the outback together, everyone’s away from their families. The crew were all from Adelaide because that was where we were based, and everyone would travel because we were maybe four hours away from the city and we were staying in these tiny little towns. Everyone spends a lot of time together and everyone gets really close, and it felt like a family on set. It’s always special when that happens. It felt like a really safe place to work.

What challenges did you face?
We definitely had environmental challenges. The outback was not always the easiest to film in. The first scene Jamie and I filmed together was in a sandstorm. It was a massive scene from episode three and it was just hilarious because we started shooting and then this massive sandstorm comes and we’re trying to talk but we couldn’t. Everyone’s wearing nets over their heads. It was insane, and we had to stop shooting. Then at the end of the day, we had an hour to shoot this massive scene that was slated for six hours, and that’s when the flies came out. There were flies in our face to a point where we were waving them away too much [on camera]. It was just one of those funny things, but we definitely had flies.
Chris was so good with character work. It’s nice having an actor’s director, and he was so good with trying out different comedy things or different moments. He really picked up on natural moments of my clumsiness and was like, ‘ We’re keeping that.’ In my first scene with Jamie, I throw a pet across the room by accident. That was very much by accident,  and he very much kept that in there. I put my hat on backwards – he kept that in there. He was really good at finding those moments and keeping them, and that was really cool.

You appeared in Netflix’s Unbelievable, a series based on true events about two detectives investigating a series of rapes after one woman is accused of lying about her own sexual assault. What was that like?
It was really emotional because it’s such a heavy subject, but it was amazing in an entirely different way. That was shot in LA, which I’m glad about because, at the end of the day, I could go home to my animals and my friends and get out of that world. A lot of the time when I’m on set, what I like about being away is that you stay in that [character] and you’re focused. I don’t think I could do Unbelievable alone, away from home, and just be in this weird headspace.
It really is in support of survivors everywhere. That was beautiful. That was the main thing that drew me in instantly. I was really grateful that I got to be a part of that. When you’re telling true stories and stories that happen to women all the time, you want to do it the right way. You don’t want to come at it from a perspective that you don’t understand or that’s judgemental or anything like that. They really came at it from the right way and in support of the survivors.

Is there a difference between film and television roles?
I love watching television. That’s the funny thing, I really do. I grew up obsessed with TV shows and movies. When I went to America, I was like, ‘I just want to be on a show.’ Then I accidentally went the route of movies and I fell in love with the process of making them. You travel a lot. You get to go to a lot of different places and you get to play a lot of different roles, and that’s really fun to me. It’s not that I have a preference for them, it’s just what has come my way. Then I love something like The Tourist, where you get to spend longer with a character. But it’s very different from a seven-year commitment to a [US broadcast network] show. I just see what comes my way. It’s more about the script than anything else. If it’s an amazing script, I want to be a part of it regardless of the format.