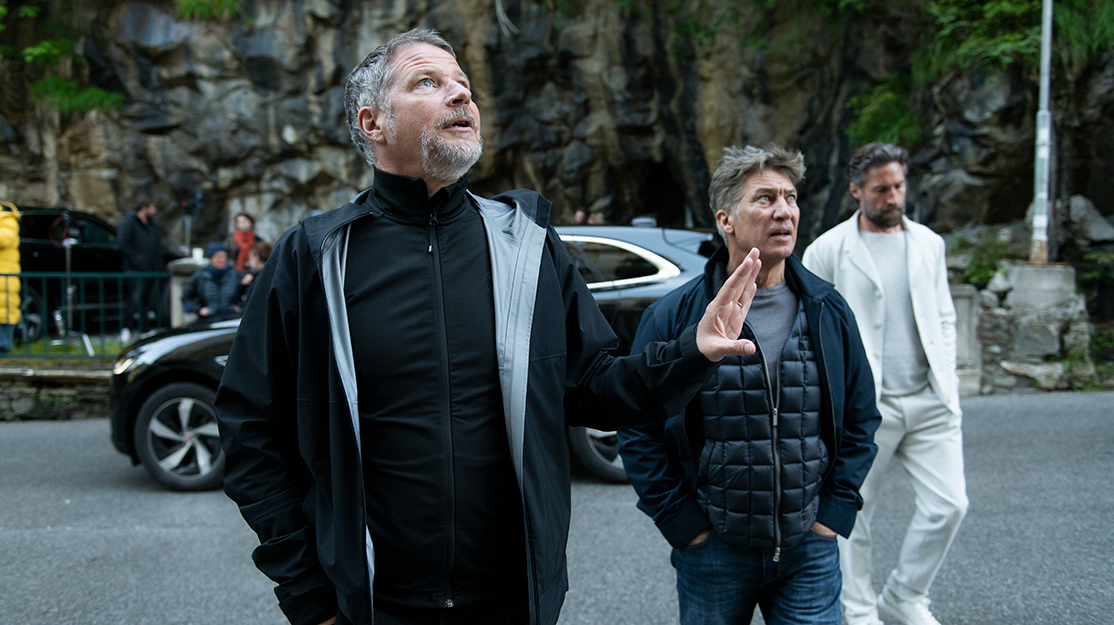 Top of the league

Writer Martin Ambrosch and director Andreas Prochaska take DQ into the world of The Net – Prometheus, the first in a proposed series of multi-language, interconnected stories set in the arena of international football.

Andreas Prochaska openly admits he is not the biggest fan of football. So it may be a surprise to see the award-winning director taking charge of the first show in a planned franchise called The Net, a series of interconnected stories, set around the world, told in different languages and each dealing with a different aspect of the beautiful game.

Created by Matthias Hartmann, creative director of content development at Red Bull Media House, in partnership with German producer-distributor Beta Film, four initial series are being developed with production companies in Austria, Germany, Italy and Spain/Mexico, with the stories all building towards the opening of the next Fifa World Cup in Qatar at the end of 2022.

The Austrian series, The Net – Prometheus, is the first to have been completed, with Prochaska (Das Boot) partnering with writer Martin Ambrosch (Maximilian) on the eight-part show that will set the blueprint for how each instalment of The Net will work in tandem with the other iterations.

Set in Austria and the UK and filmed largely in English, it follows Georg Trotter, played by Tobias Moretti (Bad Banks). A doctor and former doping agent , he gave up his career after a tragic car accident badly injured his wife, Diana, played by Angel Coulby (The Tunnel), and killed his beloved son. Known as a notorious doping hunter and “bloodhound,” Georg is offered the chance to run a new hypermodern, high-performance clinic in the Alps.

There, the staff are supposed to get injured football players back into shape in record time with high-tech training methods and help young talent to become the best footballers in the world. They promote clean sports without illegal tricks, but Georg soon has doubts.

The series also stars Amanda Abbington (Sherlock) as a police officer involved in a storyline that takes place in Liverpool, plus Benjamin Sadler and Nicholas Goh.

“We start the whole thing with a soccer game,” Prochaska tells DQ. “We start with a lower-league game somewhere in Liverpool where our main character, a doping agent, is in this minor league still doing this job, so we meet him at a point in his life where he is desperate. He gets this opportunity to enter this clinic and the journey moves from Liverpool to Austria. I think it’s going to be very exciting.”

Ambrosch was first approached by producer MR Film to develop ideas for both the Austrian and German versions of The Net, called The Net – Promised Land, and when the first draft of the Austrian script was finished, it was sent to Prochaska.

“It was a process because there were ideas to develop a Net that consisted of different series,” the writer says. “We had different discussions about what the topics of the series could be, so it took a long time. I thought it was very ambitious and very complicated because you have different characters from different series who appear in every series of The Net. It’s really complex.”

The Net – Prometheus is deeply rooted in research, with Ambrosch speaking to numerous genetics and doping specialists and scientists who worked as advisors on the series. He is reluctant to say too much for fear of giving away the story, but what he can say is Georg finds himself at a mysterious clinic where the future of medicine is already in action.

“It’s a clinic where young players are tested and coached but it’s a lot more than that. It’s about life and life expectancy as a whole,” he says. “Genetic optimisation of the body is the future of medicine and all of us, and, of course, football players can be victims of genetic research because they are really the fittest, youngest and best suited for how we should all be as organisms.”

When he was writing the scripts for The Net – Prometheus, Ambrosch was also simultaneously developing the German version, which is produced by Sommerhaus Filmproduktion for ARD. “So I knew what that was all about and I knew about the background to the Italian Net,” he continues. “Matthias and I had discussions all the time about how we could put the shows together. The solution was to have characters that appear in every show, but that each series is unique. You can watch characters from the Austrian Net in the German Net and the Italian Net. There are football players in the Italian Net who get injured and come to the clinic in the Austrian Net. I still have a huge map in my office with all the characters and their interconnections.”

But when it came to writing the series, Ambrosch would “just lock myself away and not care about the other Nets or the interconnections between them because I have to write my own story.” Similarly, Prochaska didn’t care too much about the interconnectivity between the series when he first began to prep The Net – Prometheus, with his focus squarely on making that single series as good as possible.

Set primarily between Salzburg and Liverpool and with a cast from Germany, Austria and the UK, the show wrapped at the end of October.

“The realities of production were we started our show earlier than the German show. I didn’t read the German scripts, I was just aware that some characters from the German series were going to appear in my show,” the director says. “It was a funny situation. I had the first shooting day of a character who is a main character in the German show and they hadn’t started production at that point, so we had to talk about things like what his costume would be. It was funny to meet an actor a fellow director cast [in their show] and do a scene.”

The ongoing Covid-19 pandemic led cast and crew to be tested every day, while masks were mandatory on set. Like in the real world, there were also questions about whether football matches – with stadiums full of cheering crowds – would ever be the same again.

“But we decided on this show nobody wanted to see this [the pandemic],” Prochaska says. “You don’t want to be reminded the world is a fucked up place right now, so we are in a fairytale land where people are not wearing masks. Every supporting artist had to be tested, so the rules were very strict.”

Behind the camera, Prochaska teamed up with his son, Daniel Prochaska, who directs episodes five to eight.

“For me, it was interesting to enter this world of football that I don’t really like so much, but it was very helpful that my son is a big football fan so I asked him to direct the football scenes,” Prochaska says. “It was an interesting challenge to shoot Liverpool in Vienna. We tried to limit the UK base as much as possible [due to Covid], so you have an interior set in Vienna and then you’re in Liverpool.

“What I really enjoyed was to have all this different talent from different backgrounds in front of the camera. Usually in casting, you try to bring people together before shooting to get the chemistry right, but in Covid you could only do e-casting. There was one very magic moment we had a scene with Angel from the UK and Agata Buzek [Hummingbird] from Poland. The two actresses came together and it was magic. You hope for that kind of chemistry but you cannot count on it. We had several situations like this. That’s the beauty of filmmaking and storytelling – to get these opportunities.”

Other challenges included producing the show on a scale to match the ambition behind The Net, particularly in the lab scenes, which verge on science fiction in their appearance.

“We had to do something with our Austrian means that looks like an international series and not like something from the provinces,” Prochaska says. “It was important for me to make a show for a worldwide audience. On one hand, it’s important it has a unique style but on the other hand, you don’t want to make it look cheesy, like you’re in some B-picture.”

“I met interesting scientists and I learned that things would be possible in the very near future that sound like science fiction right now,” Ambrosch adds. “That was the great thing and also the complicated thing because bringing many series together was not always without complications.”

Due to air next year on Red Bull’s Servus TV in Austria, The Net – Prometheus promises to tell a story that goes above its football setting to talk about issues bigger than matters on the pitch.

“Our show is about medicine and the other shows are about corruption in football, and the Italian show is more about foreign investors taking over Italian football,” Ambrosch says. “I hope people are going to see that the topic isn’t only football, it’s for all of us. It’s a discussion about our possible future.”

Prochaska says: “If this was primarily about football and football players, we would limit the audience, so our goal was to use this and move in a different direction that’s hopefully interesting for everybody.”