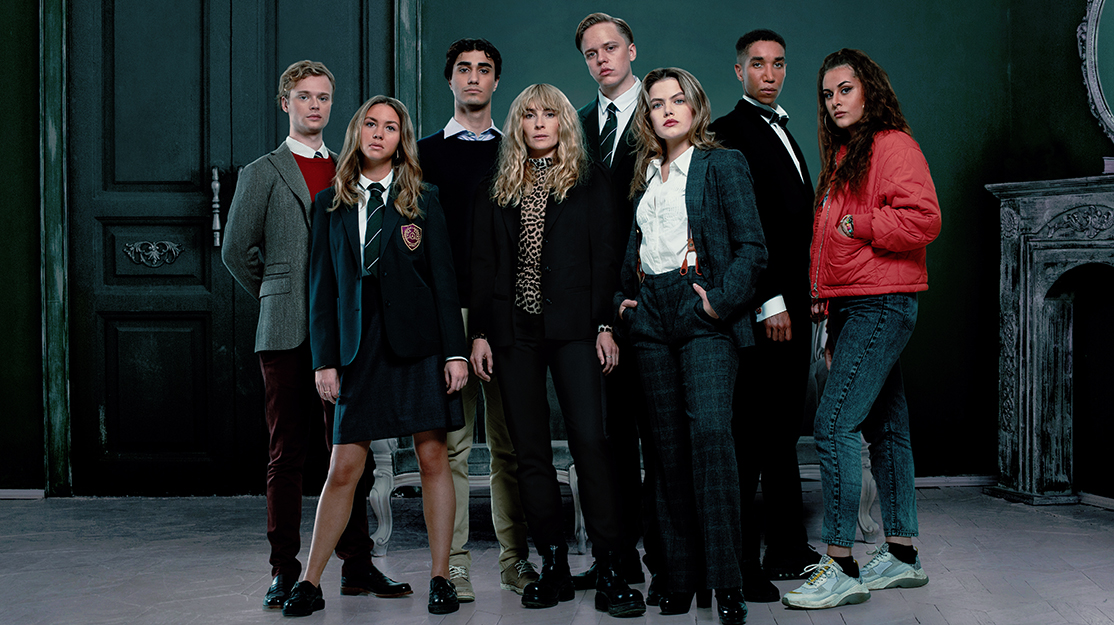 Zebrarummet (A Class Apart) writer Michaela Hamilton reveals how she tried to grip viewers with this suspenseful Swedish murder mystery set at an elite boarding school.

At a time when any number of distractions are just a couple of clicks away, spare a thought for the screenwriters who are grappling with a very modern foe: mobile phones. The challenge to keep hold of audience attention for an entire episode, never mind an eight- or 10-episode series, is an everyday predicament for writers hoping to craft the latest word-of-mouth hit.

It’s certainly something Michaela Hamilton was acutely aware of as she wrote the suspense-filled scripts for Swedish drama Zebrarummet (The Zebra Room or, as it is known internationally, A Class Apart), which debuts this Sunday on Nordic streamer Viaplay.

“I always try to think of [writing] like I need to be able to catch the interest of somebody who is addicted to their phone, probably on their couch, going to doze off or zone out at any point, and I need to keep them on their toes,” she tells DQ. “That is something we are forced into as screenwriters because the climate of how we are viewing and watching things has drastically changed in just a couple of years. It doesn’t have anything to do with respect [for a series], it’s just the way we are wired right now, and that’s something you have to factor in.”

A Class Apart certainly has all the ingredients to become a binge-worthy success: a central murder mystery, a main setting likely to be unfamiliar to many viewers, an ensemble cast across various age groups, a secret society, power games and culture clashes.

When a young student from elite boarding school Tuna Kvarn is found dead, questions about the circumstances are met by a wall of silence. The mystery brings into focus Tuna Kvarn’s rivalry with nearby state school Holmeredskolan, before a video of an initiation ceremony taking place inside Tuna Kvarn’s The Zebra Room society is leaked on social media, setting unforeseen consequences in motion.

Based on an original idea by Henrik Schyffert and Gustaf Skördeman, the show is produced by Jarowski and Brommamamma, together with coproducer Film i Väst, and distributed by Banijay Rights.

Head writer Hamilton (Eagles), who penned six of A Class Apart’s eight episodes, reveals there is a “strange story” behind her involvement in the series. “I had no idea about it until I was contacted by one of the directors, Erik Eger, and his assistant,” she recalls. “I didn’t know what they were calling about. I was writing another series at the time and they were really cryptic, saying, ‘Can we meet?’ I just got this elevator pitch about the series, I got to read one script and they needed help with the remaining ones. I was supposed to write four, but in the end I wrote six.”

This was in January last year, with production due to begin just four months later. “Everything was rushed,” Hamilton says understatedly. However, the arrival of Covid-19 pushed the schedule back to August, giving her more time to finish the scripts. Eger wrote the remaining two episodes, with the two writers supported by Skördeman, Anna Platt and Fredrik Agetoft.

Despite the time constraints, Hamilton was given freedom to craft the story in her own vision and an opportunity to explore the world of Tuna Kvarn. “I focus a lot of my attention and work on the characters, first and foremost,” she says. “I always prioritise them over plot because the characters are the ones who decide the plot. They are the ones who lead the story forward. When you have the ensemble cast we have in the series, it’s important to know what these people want and to untangle that in the beginning and focus on the spider’s web of characters.”

The writer wanted to showcase the central characters so they don’t just appear to be “one-dimensional rich assholes,” and sought to find out who they are beyond the trappings of their privileged backgrounds. “I’ve written a couple of youth series and I always try to focus on the fact that nobody’s good and nobody’s evil,” Hamilton says. “You act the way you do because of your environment. Your family forges you to become this type of person, but it doesn’t have to stick. You have a choice, and that is what I wanted to focus on. Who are these people, what drives them and why do they act the way they do? Why are they behaving this way?”

Part of Hamilton’s approach to the series comes from the fact “it’s not the first time someone has written about this kind of environment and these kinds of people.” But a world unknown to all but a small portion of society is always one worth exploring, if only to get under the skin of those who live in it.

“It could be a jungle, these schools or the secret societies of the world,” she continues. “They have the same appealing effect. We are curious – we want to know what they are all about, and that is something you can really work on. I’m drawn to these locations because I sometimes feel we, as creators, can make the mistake of [depicting the characters who populate them as] elitist assholes. But they can be something else too. What makes them tick? That’s interesting.”

Furthermore, A Class Apart is not a whodunnit in the classic sense. “There’s a wink to that, but we have these really interesting, weird, fucked-up characters we are dying to know more about. We’re following this mystery as it unfolds, but we’re also following these people and getting to know them more and more. It’s not just focusing on the mystery; it’s also a story about these people.”

With numerous characters populating the series, Hamilton had to “kill my darlings” to focus on a trio of characters at the boarding school and another three from the public school, as well as some of their friends and those circling around them. “We are getting to know a lot of people at the same time. That has been a challenge, definitely,” she notes. The cast includes Henrik Schyffert, Edvin Endre, Aliette Opheim, Valter Skarsgård, Alva Bratt, Maxwell Vaz, Tiam Miladi, Wilma Lidén, Amanda Lindh, Adja Krook and Aviva Wrede.

Many of the characters and events in the series are based on first-hand accounts from former boarding school students to whom Hamilton spoke. And while events in the series may seem far-fetched or sensational, the writer says she has actually had to tone down some fact-based parts of the story make it more believable.

“The most interesting thing is finding out that the truth is more crazy than the actual drama,” she says. “It would be impossible for me to write what they told me because nobody would believe me. They laughed about it as well. I said, ‘This is too weird. I can’t write this as it is.’”

Hamilton then worked closely with the show’s directors – Andrea Östlund, Eger and David Berron – to talk about the plot and how they could make it harder for the characters to reach the end. “How much can we entangle ourselves with these characters? That was something we had a lot of discussions about,” she says. Each episode is modelled around a central event, such as a party, a theatre show or the annual relay race that takes place between the two schools and has driven the rivalry that has festered between them.

“It’s easier to connect to the characters that way,” Hamilton says. “It was also really tough to write the ending. I wanted to do so many things, but it’s always hard. The climate today with writing series is you need to somehow have an open-ended conclusion, with the possibility to write another season, but still have it feel like a season ending. That was the hardest to write.”

Discussing visuals, the writer describes A Class Apart as a “bombastic” series full of “amazing” costumes and with set designs that are “off the charts.” Shot around Göteborg, the show has a secluded feel, with the main school setting made up of various different buildings around the city.

Hamilton is now writing two feature films and another series, but thanks to the ending of A Class Apart, she is hopeful the show could return for further seasons.

“It’s always interesting to challenge the way people see other people,” she says. “These people are terrible in every single way, but I wanted to see if it’s possible to create a world where we could find compassion for all of them. Hopefully I’ve achieved that. When we create drama, if we are somehow able to challenge any sort of perception, that is an interesting reaction.”