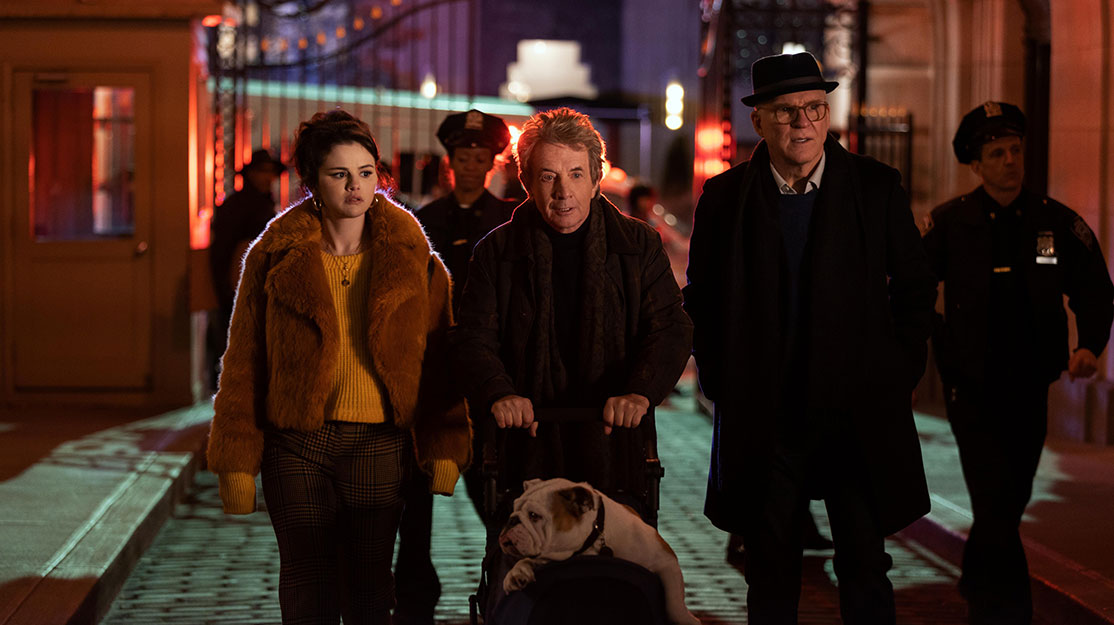 Too close to home

Showrunner John Hoffman tells DQ about creating Only Murders in the Building, which stars Steve Martin, Martin Short and Selena Gomez as three true crime-loving strangers who find themselves caught up in a case of their own.

John Hoffman still can’t quite believe he was ever invited to dinner with comedy legend Steve Martin – an occasion he describes as “the luckiest day of my life.”

The writer and producer, whose credits include Looking and Grace & Frankie, had been asked by This Is Us creator Dan Fogelman to join his producing partner Jess Rosenthal and Martin to talk about an idea the latter had for a new show. Hoffman prepared his own ideas too, thinking, “he’ll either like them or he won’t, and this will die tonight or continue on to something lovely.”

As it happened, Hoffman and Martin hit it off, and the result is Only Murders in the Building, which debuts today on Hulu in the US and on Disney+’s Star channel internationally. Mixing old-school comedy with a very modern mystery, the show stars Martin, Martin Short and Selena Gomez as three strangers who share an obsession with true crime – and then become involved in a murder investigation.

When a mysterious death occurs in the exclusive Upper West Side New York City apartment building they all call home, they suspect murder and use their particular knowledge of true crime to solve the case. Along the way, they decide to document their investigation with a podcast of their own, leading them to unravel the complex secrets of a building that stretches back years and the realisation that a killer might be living among them.

With more than a nod to the genre it knowingly skewers, the show has an element of theatricality to it, with a lot of its comedy based around the long-standing rapport and partnership between comedians Martin and Short, who enjoy back-and-forth riffs with Gomez that often centre on the generational differences between them. There are also references to The Hardy Boys mysteries and iconic director Alfred Hitchcock’s suspenseful thrillers.

“Imagining them all as fans of these podcasts who then decide they’re going to actually make this podcast together felt really funny to me, as far as the landscape of how messed up that could get,” says Hoffman. “I love that three characters who start out as fans are going to try to do their own thing.

“We also knew we were going to have to craft a real mystery that would satisfy the true crime audience. My God, that is a difficult thing to do. It turns out, as someone who’s worked on half-hour comedies, this was really hard. But I think we have something that keeps you guessing right until the very end.”

In part, the story is also rooted in Hoffman’s own experiences. In the year before he sat down for dinner with Martin, he discovered an old friend had suddenly died. Unable to understand what had happened, he launched his own investigation to rediscover the person with whom he had lost touch.

“How do I write a murder mystery when I’ve been dealing with that? A lot of Mabel [Gomez]’s story deals with that in our show and it gets very emotional,” he says. “You’re making a mistake if you don’t recognise how people connect to these kinds of crimes, why they’re interested in getting to the truth at times and what about themselves it exposes.”

By the end of the first episode, it becomes clear that actor Charles (Martin), theatre director Oliver (Short) and Mabel – “true crime numbnuts,” according to one despairing police officer – all have their own personal issues they are struggling to deal with. Whether it’s a fading career, money worries or familial troubles, it means they find investigating other people’s secrets easier than dealing with their problems. Another theme is the classic versus the modern, which appears not least in pairing Martin and Short with Gomez and putting them in a pre-war building in very modern New York City.

Discussing the show’s various contrasting tones, Hoffman describes it as the epitome of the city in which it is set. “If you walk 10 blocks in New York on any given day, you’ll find five different tonal shifts,” he explains. “You can see something that makes you roar laughing. You can see something elegant, beautiful and historical next to something very modern made of steel and glass. You’ll see an interaction that scares and terrifies you, makes you intrigued or shocks you. That’s what I wanted the show to feel like, living in a New York apartment building at any moment.”

Brooklyn-born Hoffman, who grew up in Ohio, used to live in an apartment building across the street from the one that features in the series, The Belnord at West 86th Street and Broadway, and says the experience can be isolating.

“That felt like an interesting way to look at the show. And then, of course, the world changed and made us all much more isolated again and made connection ever more necessary,” he says in reference to the Covid-19 pandemic and consequent lockdowns. “I hope that theme underneath it speaks to the need for all of us to work together. I had to ask myself, why do people like these true crime stories? Why do people like these mysteries so much? I found that, personally, I just had to know the truth. The need for the truth has never been bigger. All of it feels more modern than I even expected or planned.”

Mixing all those elements with a complex murder mystery was a challenge, he admits, and a project like nothing else he had ever done. Starting at the end, Hoffman and Martin decided how they wanted the story to be resolved and then worked and twisted their way back to the start, in the hope that viewers won’t see where the story is heading until its conclusion.

Each episode presents the characters’ podcast – named Only Murders in the Building – from a different character’s perspective, complete with accompanying narration. At various moments we also see the trio recording their audio, while cutaways also take us into the making of All is Not OK in Oklahoma, the trio’s favourite true crime podcast.

Martin, whose film credits include The Jerk, Parenthood and Planes, Trains & Automobiles, had never starred in a television series before and was “daunted” by the idea, Hoffman reveals. The pair subsequently wrote series together before Martin turned to his frequent collaborator Short – the duo’s shared credits include Three Amigos and the Father of the Bride films – to join him on screen.

“They genuinely are lovely, generous, kind human beings and utter pros,” showrunner Hoffman says. “I have had the great pleasure of working with legends over the past five or 10 years, working on Grace & Frankie with Jane Fonda, Lily Tomlin, Sam Waterston and Martin Sheen, and now with these two. The common theme is that utter generosity and utter professionalism makes for good creative partners. I couldn’t speak more highly about them.

“As far as their characters go, I’m not stupid – I’m going to lean into what I love about the two of them and let the audience have what you expect from that banter between them. The rapport of slamming each other in quiet ways is so funny; there’s a sly understanding between all of them.”

The big question Hoffman asked himself was how Gomez, best known as a singer and the young breakout star of Disney Channel series Wizards of Waverly Place, would fit alongside the comedy legends.

“In thinking about who would make sense to appear with them, we decided not to make any sense with them. It just felt like, ‘Let’s put an alien with them, someone they don’t know how to be around and how to deal with,’” he says. “I knew I didn’t want to lean too heavily into age differences, but generational differences that go two ways. It’s not just the old guys getting poked fun at for being old guys, it’s more about perspective. There’s an exchange in episode four where she’s very excited because Charles is going to have a date and he has to stop her and say, ‘Excuse me, I have dated longer than you’ve been alive.’ And it goes both ways.”

Hoffman compares showrunning the series to walking a tightrope each day, made tougher by the pandemic forcing every member of the cast and crew to deal with challenges in their professional and personal lives.

“Of course, my job was to execute it in the spirit in which it was written, so it had a lightness to it, it had a humour and it didn’t have masks and shields. We looked like stormtroopers around the set with these actors who needed to be bright and light, and they just brought it,” he says. “Everyone was happy to work. The fraught nature of the time we all lived in and the ways in which we had to make the show are underneath the performance, and that was a good thing for the mystery.”

In particular, Hoffman worked closely with production designer Curt Beech to create the apartments belonging to the main characters, from the walls and furnishings down to the fabric of Charles’s couch, so that each one reflected the personality of its occupier.

Perhaps expecting plenty of improvisation on set between stand-up comedians Martin and Short, the showrunner was surprised at their dedication to the script, though there were frequent discussions about how they might make a line funnier.

“They very much knew the plan and liked how to make what was on the page funny,” he recalls. “Then at the end, we’d get everything we needed and say, ‘Let’s do a freedom take.’ That would be less improv and more, ‘I’m going to do it in a crazier way and try something a little out there with this performance.’ That was a blast.”

Hopeful there will be “many more murders in the building” in the future, Hoffman says his experience working on this show and on Netflix’s Grace & Frankie means he is also championing more roles for older actors who might not get the screen time they want or deserve.

“I watched Jane Fonda on the set of Grace & Frankie getting ready to do a take the first time I was there and, as the director was about to call action, I watched her take a breath as though she was a 20-year-old and suddenly she was ready to go,” he says.

“I see the same thing in Steven and Marty. It’s ageless and it is just so inspiring. I’ve made friends in the last five to 10 years with so many people who have made incredible work for decades in films, and now TV is allowing for more of that. I hope this only encourages more of that because, boy, does it work like gangbusters.”