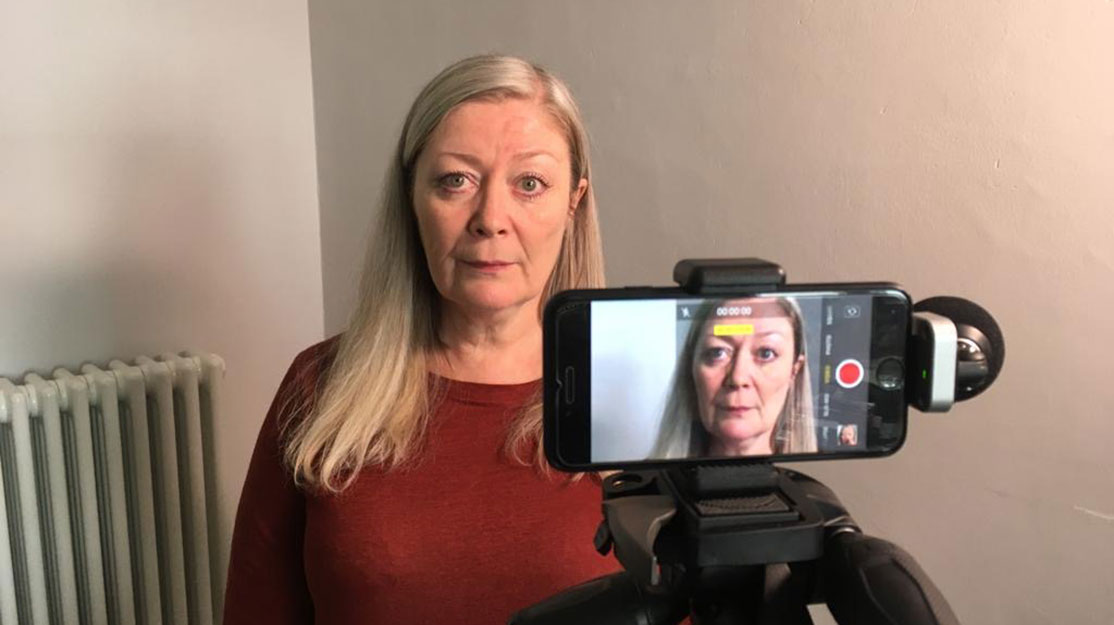 Julie Graham is meant to be in Scotland, shooting season six of BBC crime drama Shetland. Instead, she’s filming scenes from her latest series inside her own home.

The Benidorm and Penance actor is the creator of comedy-drama Dun Breedin’, teaming with director Robin Sheppard (New Tricks, Delicious) to piece together the story of five longtime friends who have overcome life’s adversities together and now find themselves at different stages of the menopause.

It’s an idea Graham has been developing for two years, though she never imagined she would see it brought to life within the unique filming limitations provided by the current UK lockdown.

“I’d been mulling it over and developing it with [producer] Andrew Green, and I always wanted Robin to direct,” she tells DQ of her first writing project. “I was trying to bash it into some sort of shape to send off to commissioners and stuff, and then mad Andrew just rang me up one day and said, ‘Let’s just shoot it.’”

By this point, Graham hadn’t written any scripts, only some character breakdowns and an idea of what direction they might take. Green then proposed filming a batch of 10-minute episodes that could be shot in the actors’ homes, with Sheppard directing remotely. Blonde To Black Pictures Two and Manic Butterfly Productions are producing.

“It was like this snowball effect. Andrew’s got all this energy that pushes me along, and you just go, ‘Yes, of course, we can do that.’ Then the next thing we’re doing it,” she says.

Camera packs were delivered to the cast, while Sheppard provided them with shot lists showing where the camera should be in relation to their position in the room.

“This is a whole new way of working,” the director admits. “I work out how to shoot the scene so it will cut together, and then I write all the shots down in a shot list and then do all sorts of diagrams, because it’s very difficult actually to articulate. It’s an aerial view of where the camera is and what size shots to do so we get the right kind of coverage and we can cut it all together.

Despite the filming conditions, Graham made the decision not to set Dun Breedin’ during the lockdown. But while this increased the limitations facing the story, she says it also sparked her imagination.

“If we’d set it in lockdown, we would have had more limitations because that’s all we would have talked about and it would have got a bit samey and a bit dull, so this is all about the world that was before, but we’re just far too busy to see each other,” she explains.

“We’ve just spent a lot of time on the scripts. And then we’ve had to utilise husbands, wives, girlfriends, boyfriends, children, animals and anyone who can pick up a camera and have a go, so it’s been a real family affair.”

Considering the challenges of filming in lockdown, the ambition of the series is evident from the fact that neither Graham nor Sheppard wanted to tell the story through the frame of a FaceTime or Zoom call, but film it as if they were on a real set.

“It’s extremely ambitious. And it’s a massive learning curve, particularly the first shoot, and everyone’s really up for giving it their very best shot, but it’s got such a great vibe,” Sheppard says. “We shot the first shoot day last Monday [April 20], and I’ve watched all the rushes that have been uploaded. Then we’ve got a really good editor, David Barrett, who’s cutting away in his shed in his garden, very safely, socially isolated.

“I was just so impressed by how well the actors have taken to the technical side of it. They’ve really embraced it. We’ve got some extraordinarily good footage, brilliant acting across the board and fantastic scripts. So that’s a really good starting point.

“I love the way they’ve done the shot list but in their own idiosyncratic way – it’s brought so much to the party. It’s given it a unique visual quality I was really hoping for and absolutely delighted to see. It’s difficult to quantify but it’s got a magic quality about it, quite unlike anything else, which is a product of it being shot on the way it is.”

Griffin, known for roles in Coronation Street and The Detail, and also set to star in upcoming Netflix series White Lines, admits she has been “loving” filming Dun Breedin’. “I’m quite techie anyway, so I’m really interested in the behind-the-scenes of TV as well as what goes on in front of the camera,” notes the actor, who was approached to take part by Sheppard after he directed her in period drama Harlots.

“I just really enjoy it. There’s an incredible cast; I know a lot of them, so we’ve already got a shorthand between us, and Julie’s really cleverly written a show not about the lockdown to be shot in lockdown,” adds Griffin, who has reeled in her whole family to help shoot her scenes.

“Our industry has completely and utterly fallen apart. It’s non-existent, there’s nothing going on, so we’ve got to find a way to keep being creative. And with Julie Graham at the helm, we might have found a way.”

Sheppard describes the characters as “sassy, ballsy women,” who share an intimacy with each other because they’ve been friends for such a long time. “Luckily, quite a lot of the cast know each other really well, so that really helps with that, but there’s a real freshness to it,” she continues.

“It’s bloody funny and really moving as well. There’s some quite tough stuff mixed in there. It’s not all high jinks by any measure , there’s some properly difficult material as well. But there are some corking laughs and they are an outrageous bunch of really great, sassy women.”

“We’ve all got our different relationships and I just wanted to show those strands of friendship and not shy away from all the messiness of life and all the stuff that goes on,” Graham says. “I don’t see a lot of it on TV. A lot of it I just can’t relate to. So I wanted to write something from the heart that was releasable, something that was my experience of strong female friendships and how they’re very complicated sometimes and incredibly loyal. I’m not going to shy away from it. I am planning for them to have some spectacular arguments as well.”

There are also some male characters, such as Roo’s husband (Steve Edge), who has retreated into his garden shed to avoid her at “peak menopause.”

“My husband didn’t want to act in it so he’s now my DOP, my gaffer, my caterer and my everything,” Graham says of casting Edge. “I was on FaceTime with Steve and we opened a bottle of wine and had a drink together and he was in his shed. It’s amazing, it’s a real man cave. I suddenly thought, ‘Why wouldn’t he be in the shed all the time?’ It was born out of that, so I’m getting all this inspiration talking to other people. I’m constantly being inspired by the other actors and what we can utilise for the scenes and stuff – because at some point, I’m going to run out of ideas.”

Primarily a character-driven story, Dun Breedin’ also contains some serialised elements that will link episodes together, with episode one featuring a character posting something they shouldn’t have on Facebook.

“That sets off quite a lot of hoo-hah and then there’s the aftermath of that. But there’s also the stuff of everyday life that you very rarely see in comedy dramas,” Sheppard notes. “It’s the day-to-day detritus and the coping with the domestic world around you, but also stuff at work.

“Julie’s character’s got quite a tough job. She works for the NHS in mental health. So she’s dealing with some fairly hardcore stuff and then she comes home to her extremely annoying teenage daughter who can’t look beyond the end of her own nose, so it’s all that kind of stuff.”

Setting the series in the characters’ homes also focused the drama on family relationships, Graham says. “If we were shooting this in a normal way, there would be a lot of pressure on us to have very strong plots and to also focus on more than the detritus and minutiae of domestic life.

“I don’t want it to be too domestic because I don’t want to say that’s all women’s lives are. But at the same time, it is so much part of our lives and we may as well make it funny as we go along, because it is. Sometimes it’s ridiculous and it’s funny and it’s all those things I want to reflect. It’s focused a lot on that but it’s probably the stronger for it.”

The actor and writer would ultimately love to see Dun Breedin’ land on mainstream TV at some point in the future, but until then, it will be released in 10-minute chunks twice a week on YouTube, beginning tomorrow. The series is also raising money for the Trussell Trust, which supports a network of food banks across the UK.

“What’s brilliant about this is the decision to make it definitely not about lockdown, because people need an escape from lockdown. They need to see something that’s fresh, new and bold and done despite the lockdown,” Sheppard says.

“Everyone’s very aware of all the issues surrounding the lockdown, particularly the people on the front lines still out there, being incredibly brave and doing very challenging jobs, but also for a lot of people psychologically adapting. But there’s something really admirable about a group of people coming together and working out a way to still be creative and keep those muscles all taut and toned but not making it about the lockdown. That’s not part of the story.”

“People just rise to the occasion,” Grahams adds, pointing to videos of ballet dancers and musicians playing together despite being not being physically together.

“For actors, it’s different because we can’t just go on YouTube and start acting or put ourselves online and start doing a soliloquy. I mean, I’d probably get carted away. They’d think I’d lost my marbles! It’s difficult for actors, so this is a great outlet, and that’s probably one of the reasons they all just jumped at the chance to do it.

“Everyone I asked said yes, and I was so grateful and so chuffed that they they all got on board. It was so flattering.”