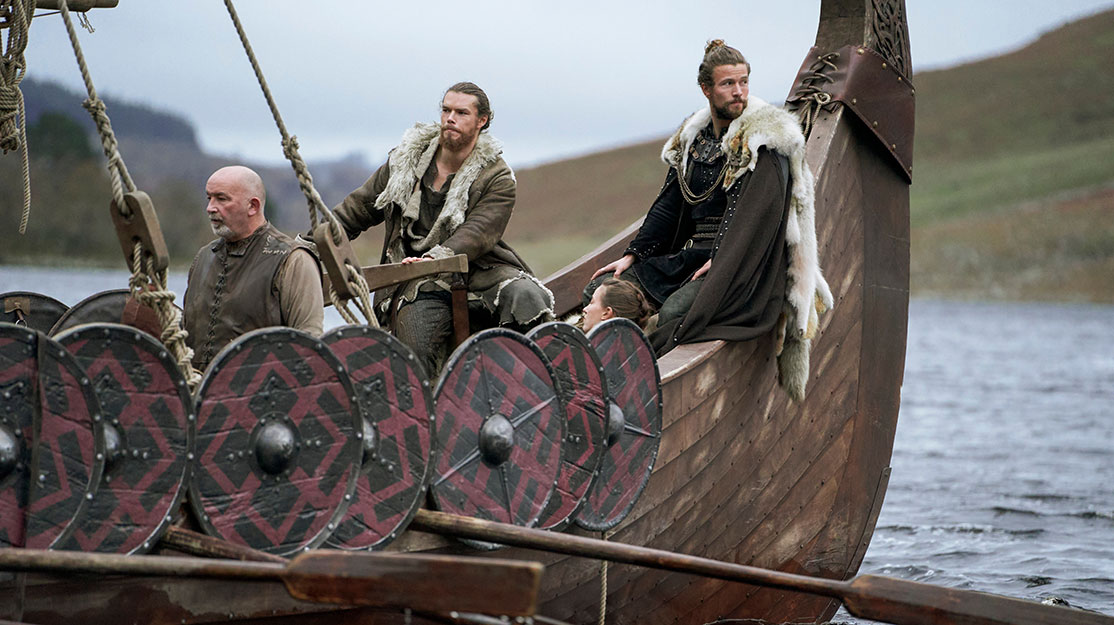 Die Hard screenwriter Jeb Stuart speaks to DQ about creating his epic Vikings: Valhalla for Netflix: “They didn’t come to me to remake The Tudors.”

Across six seasons and almost 90 episodes, Vikings chronicled the extraordinary and ferocious world of Norsemen who raided, traded and explored during medieval times.

Season one, which launched on US channel History in 2013, initially followed the adventures of Ragnar Lothbrok, a real historical figure and ruthless warrior who rose to become king of the Viking tribes.

Now a new series, Vikings: Valhalla, is set to further explore the world of Vikings, this time beginning in the 11th century and charting the adventures of some of the most famous warriors who ever lived. Viewers will meet Leif Eriksson (played by Sam Corlett), Freydis Eriksdotter (Frida Gustavsson), Harald Sigurdsson (Leo Suter), King Canute (Bradley Freegard), Olaf Haraldsson (Jóhannes Haukur Jóhannesson) and Jarl Haakon (Caroline Henderson), among others.

Launching worldwide on Netflix tomorrow, the series comes from showrunner and screenwriter Jeb Stuart, whose career includes feature films such as Die Hard and The Fugitive. Valhalla marks his first live-action television series, following 2020 animated drama The Liberator, but despite the increasingly blurred lines between the big and small screen, his journey to television hasn’t always been smooth sailing.

“About 10 years ago, I began retooling toward television and a lot of people say, ‘Well, you know, writing is writing,’ but that’s like saying I just changed from the army and went into the navy. Yes, you wear a uniform but it’s a totally different animal,” Stuart tells DQ. His foray into television first began at a time when executives would “roll their eyes” at the thought of a serialised drama, or the possibility of launching a boxset online instead of airing episodes weekly.

“But from the time I started transforming from a feature writer into a television dramatist, the world came closer together, as opposed to getting farther apart,” he says. “For Valhalla, you’ll see that each each episode is like seeing a small movie as opposed to an episodic TV show that’s broken into acts. It’s a totally different thing.”

After a career spanning around 35 years, Stuart has performed many different roles, not least as a writer, director and producer. A lot of his work has also been uncredited, coming on to projects when they are already in post-production. But he says the variety of work he has taken up means he has been well suited to his newest job title, that of showrunner on Valhalla.

“It has given me a lot of skills to use in active production, as opposed to the basic audience perception of a writer handing over a script and saying, ‘I’m done, I’m going off to the next script,’” he says. “To come in and direct your own script, direct somebody else’s script or work in post-production on somebody else’s project – those are all skills that a showrunner has to have, managing the flow of work to the set. And especially in a long serialised drama like this, you’ve got to have somebody who has – and I use this term broadly – a creative point of view. That’s someone who not only sees that episode, that scene, that block or that season, but can see the overall scope of where you want these themes to end up, out over the horizon somewhere.”

It was on The Liberator that he first partnered with executive producer Morgan O’Sullivan, who had also worked on Vikings, and through that relationship Stuart came to know Vikings creator Michael Hirst. Working together on a Civil War-era series, they found a shared belief in the modern relevance of historical dramas. And although that project didn’t get off the ground, O’Sullivan invited Stuart to consider working on a new Vikings series that wouldn’t simply serve as the seventh season of the original show.

Valhalla now opens in 1002, more than 100 years after the end of Vikings, at a time when Danes, Swedes and Norwegians have established an area of England known as the Danelaw, causing problems for the Saxon ruler, King Aethelred II of England. Religion also plays an important role in the series, as a civil war plays out between the pagan and Christian Vikings. Through the story, Stuart asks what is it to be a Viking – is it in your DNA or your belief system?

“As his story was starting to get into the Christians versus the pagans, it takes on a blurriness for the Viking world. That’s the world I had to come into, which is a culture 150 years later, where you’ve now got a very entrenched Christian element in the early part of the 11th century in Scandinavia,” Stuart says. “Whereas all over the rest of Western Europe, it’s been there quite a while, and in places like Ireland it’s been there for 500 years. So what does that do to Vikings? That’s the first question we ask in Valhalla – if you are a Christian, is being a Viking something in your DNA? Or is it something in your belief system and your theology?

“It’s really about an entrenchment of belief systems, and our world right now is one where it’s a black and white universe. The ability to cross over takes a very, very brave person. There are areas of time in our history where we get entrenched, whether it’s prohibition in the 1920s or abolition in the 1860s in the US. There was no grey area. And so that’s where we were in the 11th century with the Viking world. It’s a dangerous place to be.”

Valhalla saw Stuart team up with Vikings producer MGM, which presented the writer with its take on the new series and then backed his vision, which began to take shape after he learned of the St Brice’s Day massacre in 1002, when King Aethelred ordered the killing of dozens of Danes.

“I suddenly realised right there, that’s the first domino for me,” he says. “If I was a Viking, whether I’m Christian or pagan, how would I react to the King of England killing my people? It was in his power as King of England to exterminate the Danes and for me, especially at the time when I was thinking about that, it sounded strangely familiar to the rhetoric that we use to talk about immigration in the US right now. It wasn’t a very hard jump dramatically to say if I was one of my main characters, how would I react to that? That’s the impetus to the start of our show.”

Stuart then decided to introduce a group of Greenlanders – Leif Erickson and his sister Freydis – to the fray to allow viewers to see this world through the eyes of some outsiders.

“It allows them, and therefore us, to see it as it is,” he says. “I’m a big believer in not sitting around telling people a whole lot about the story – I’d rather show it. I know that’s the screenwriter trope of ‘show, don’t tell’ but it’s a lot harder to do than you think. It’s time consuming and it requires directors who are visually committed, as opposed to putting a camera in and having a two-hander. It creates a great launching pad for it. My show has a lot of suspense. I come from that suspense world. Having subplots that don’t allow the audience to get up and go to the bathroom is kind of an important thing, so you’re always worried about something happening.”

Stuart lay out the story for season one of Valhalla and then wrote the first two episodes himself to get the series underway. He then assembled a team of writers – Vanessa Alexander, Declan Croghan and Eoin McNamee – to work through the rest of the episodes together in Dublin before the Covid-19 pandemic had landed. Then, when the scripts started coming him, “I did what showrunners do, which is get it all to line up and make it work,” he says.

Stuart also used a team of researchers to ensure the show’s history is sound and that no modern vernacular slips into the scripts.

“This isn’t The Great, let’s say, where we can be fast and loose with the language,” he says of US streamer Hulu’s royal period comedy-drama. “At the same time, I try to keep within the spirit of the period. A lot of Michael’s series was just based on myths and stuff, but by the time we get to the 11th century, people are actually writing a lot of this stuff down. I can’t take quite the liberty that Michael did, but I do take liberties like anybody who’s writing historical drama today does. And if they tell you they don’t, they’re lying.”

Following in the footsteps of Vikings, Valhalla joins other Netflix series such as German series Barbarians and UK-made The Last Kingdom – which will return for a fifth season on March 5 – that have tapped into a demand for action-based historical dramas.

Like those shows, Stuart promises Valhalla will have a lot of fighting and battles. “They didn’t come to me to remake The Tudors. It’s got a lot of axe,” he says. But those same scenes must also move the characters forward and better inform the audience about them in some way. “It’s not gratuitous violence. It better inform the audience in that the character comes away from it knowing more. You’ll see a lot of that in the show. I enjoy that, I’m that audience, I want to see that. If I’m tuning in for this, I think there is a lot of really good action, and a lot of good suspense.”

With work on season two already underway, Stuart says he knows exactly where the show is heading. “For me, it’s really lucky that this isn’t a truck that’s being driven over a cliff or into a wall. The history supports us and by taking the story into how England developed after 1066 and why it did had a lot to do with the Vikings. It’s a very natural segue into a part of history that most people understand and know.”

Looking back on his film career, Stuart jokes that the hardest part was getting people to start arguing about whether Die Hard was a Christmas movie or not.

“Even when we were developing it, it was always going to be at Christmas,” he reveals. “It had to take place at Christmas. At one point we thought about it snowing in LA and we decided instead of snow, it would just be fake snow – there would be all those bearer bonds coming down [from the roof at the film’s climax] and stuff like that. Truly, the people who stoked the fire of an argument are all the people who are still getting residuals from it. Trust me.”

As for the hallmarks of Die Hard or The Fugitive or any of the action films he’s worked on, “I wanted to come into action and not feel like you had to take a shower after you saw something, that you can enjoy it and feel good,” he says. “That also goes for whether it’s The Liberator or Valhalla. For me, that makes it a lot of fun.”