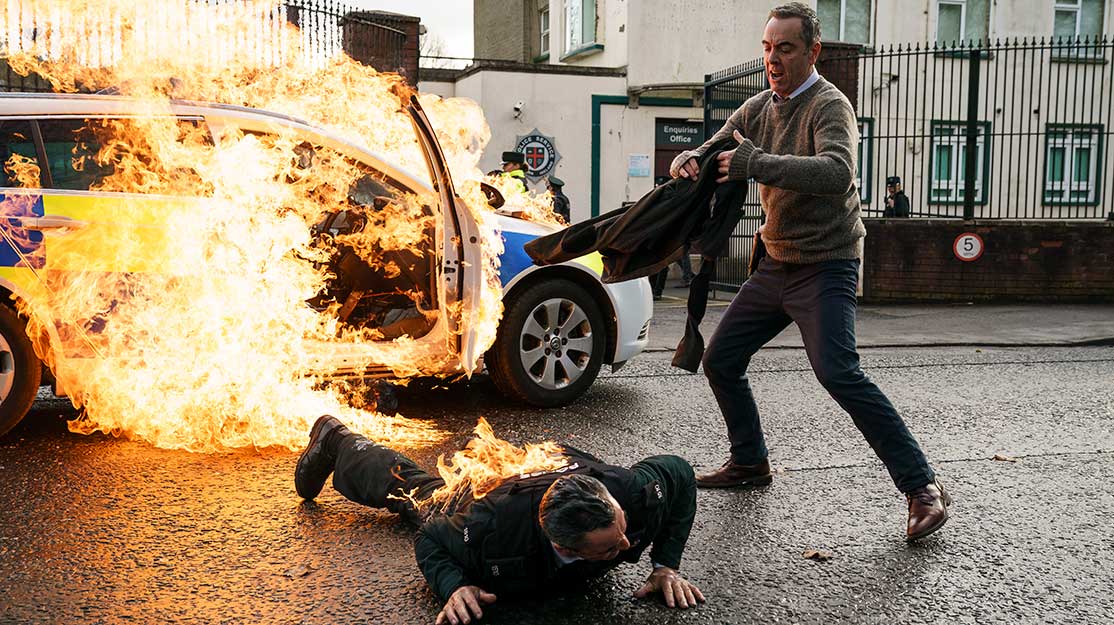 Line of Duty and Bodyguard showrunner Jed Mercurio speaks to DQ about his latest project, Northern Irish crime thriller Bloodlands, and his ambitions for his recently launched production company.

When the coronavirus pandemic hit the UK, the BBC’s Line of Duty was among the TV shows forced to suspend production, with filming on the hit crime thriller’s sixth season brought to an abrupt halt. Fortunately for showrunner Jed Mercurio, however, he was still able to continue working on another crime drama that wrapped filming the week before the country went into lockdown.

Bloodlands, created by Chris Brandon with Mercurio as an executive producer, opens when a car containing a possible suicide note – and no body – is pulled out of Strangford Lough, Northern Ireland. Detective Tom Brannick (James Nesbitt) quickly connects it to an infamous cold case with enormous personal significance.

The case relates to the investigation into a notorious and long-buried series of mysterious disappearances and Tom’s obsessive campaign to identify and unmask the semi-mythical figure behind these events, a person codenamed Goliath.

The four-part series marks the first commission for HTM Television, the fledgling production company Mercurio launched with Hat Trick Productions (Flack, The Secret). But with the pandemic taking hold around the world, he admits “we were incredibly lucky to get [filming] in just under the wire.” For the past few months, post-production has taken place remotely ahead of the drama’s launch later this year.

“One of the effects of people working from home is we’ve got to extend our post-production strategy slightly, just because it takes a little bit longer for everyone to see the material, give notes and for those notes to be acted upon,” Mercurio explains.

“So much of post-production involves groups of people sitting together watching a cut, listening to a mix or watching a grade. Because those things aren’t possible, we’ve had to come up with solutions that involve a little bit more time being taken.”

With series like Unforgotten and Bancroft recently delving into unsolved murders, cold-case dramas have proved popular fare on the small screen of late. But what makes Bloodlands so distinctive, says Mercurio, is its Northern Irish setting and how the story plays into the country’s 30-year conflict known as The Troubles.

The cold case at the heart of the story takes Tom back to the run-up to the signing of 1998’s Good Friday Agreement, which led to the end of The Troubles. When a number of controversial figures from both sides of the struggle seemingly vanished into thin air, their cases were swept under the carpet and forgotten at a time when no one wanted to rock the peace process.

With a personal interest in the case – he believes his wife was a victim of Goliath – Tom sets off to uncover the truth about Goliath and find out what really happened.

“It’s a highly contemporary thriller, but it has got one foot in the past of Northern Ireland,” Mercurio says. “As people the world over know, there was political unrest in Northern Ireland until the Good Friday Agreement in 1998, which has transformed Northern Ireland now into a very prosperous and peaceful part of the world.

“The drama is looking at a case that potentially could disturb that fragile peace, and our protagonist, DCI Tom Brannick, has some knowledge of a particular set of mysterious disappearances that occurred in the lead-up to the Good Friday Agreement.

“It’s entirely set in the present. It’s very contemporary. And it addresses some very significant and thought-provoking issues entirely through how the police and the population in Northern Ireland have to wrestle with conflicts and unsolved crimes from before 1998.”

Mercurio continues: “One of the jobs of a police officer is to keep the peace, and the other job of the police officer is to investigate crime and seek justice. It’s a real tribute to Chris’s genius that he’s come up with something that encapsulates both of them in a nutshell. Basically, James Nesbitt’s character comes across a case, some of which is pre-1998 and some of which is post-1998, so he has to tread a fine line in seeking justice while keeping the peace.

“Some things are for the greater good of keeping the peace and allowing society to return to normal, but that also leaves some people behind. People who lost loved ones, people who feel they’ve experienced events they’ll never be able to get justice for are left in an emotionally very difficult position.

“One of the things we were very careful about was not to make it so detailed about local Northern Irish politics. It was critical that we concentrated on the universal theme – that in any country or any region that enters a process of truth and reconciliation, there is that balance that has to be found between justice and keeping the peace.”

Filming took place in Belfast and Strangford Lough over 10 weeks between January and March this year, with the weather providing the cast and crew with their biggest challenge. “Northern Ireland is a beautiful part of the world but the weather is very changeable,” says Mercurio. “Weather systems blow in front of the Atlantic, so you can get four seasons in one day. That’s a real challenge for filming because if you start shooting a scene and it’s driving rain and then, halfway through, it is bright sunlight and dry as a bone, it certainly doesn’t work for continuity.

“There were times when we couldn’t shoot things we wanted to because it was too windy or too wet. It just wasn’t feasible to get through the shooting day, so then we would relocate and shoot interiors. There was one day when it snowed, which really left us scratching our heads. We just had to stop for half a day until the snow melted.”

As “a proper thriller,” Bloodlands sits comfortably alongside the other series on which Mercurio has worked, complete with action sequences, jeopardy and mysteries that aren’t resolved until the very end. He first read the script a couple of years ago and says Brandon’s talent jumped off the page.

“I was really struck by Chris’s writing voice and his ability to weave characters and story together so well,” he says. Mercurio and Brandon then developed the series together until they reached a point where Cold Feet star Nesbitt, who comes from Northern Ireland, came aboard. They then secured the backing of the BBC for what would become HTM Television’s first production. The show is distributed by Hat Trick International.

“We’ve got a broad slate, but I always say we’ve got a focus on thrillers,” Mercurio says of his company. “It’s a genre I love and a genre I think the audience loves. But we are developing other things as well, and I’m confident that, over the next couple of years, we’ll see real diversity on our slate.”

Launching the company gives Mercurio the chance to work with upcoming writers while also stepping back from the showrunner role he takes up on Line of Duty and Bodyguard, allowing producers and directors, as well as the scriptwriter, to take on creative decisions he would otherwise make himself.

“That was certainly the case with Bloodlands,” he says. “Chris Hall [The Durrells] is producing it, who I’ve worked with before [on medical drama Critical]. He’s a fantastic producer. Pete Travis [Omagh] is directing it – he’s a very experienced and very talented director.

“When I was around, what I was focusing on a good deal of the time was developing Chris Brandon’s producing skills. When we were both on set or on location, he was observing things and we were talking about them and I was encouraging him to get involved and talk to the director, the cast and the heads of department, so he developed the skill and experience that has allowed me to become a showrunner.”

HTM is also producing Trigger Point, which is written by Daniel Brierley and reunites Mercurio with Line of Duty star Vicky McClure, who plays a bomb-disposal operative pushed to breaking point during a terrorist campaign.

Filming on the sixth season of Line of Duty was suspended in March when the risk to the health and safety of cast and crew became too great. Mercurio says he has spent some of the downtime finishing the final scripts, but admits he will have to take stock of the real-world situation when production eventually resumes.

“Line of Duty is one of those series that attempts to be set in the real world, and often we refer to events in the past and dates in the past,” he adds. “Clearly anything that relates to the period of the pandemic may have an effect on what events could really have happened and how police may have gone about their work in this current climate. I think we may have to look at that.”