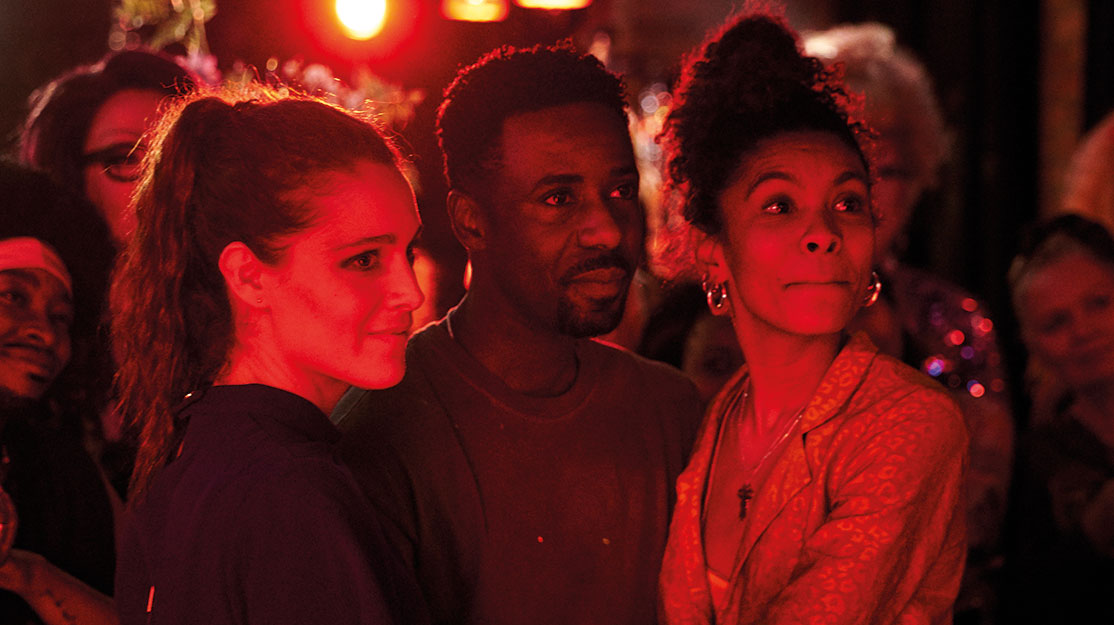 Pushing the boundaries of traditional relationship dramas, BBC series Trigonometry explores the polyamorous dynamics between a couple and their lodger. As the producers and cast explain, it’s sure to be a conversation starter.

It’s possibly the sexiest thing to happen inside a grimy-looking laundrette since Nick Kamen took off his Levi jeans back in the 1980s. Three people, all in love with each other, are flirting underneath the newly washed bed linen. There are giggles. There is stroking. Lips are licked, glances are cast.

“It is a big love story told in a completely different way,” says producer Imogen Cooper of the series, which has been made by House Productions for BBC2. “It is all the things you get in a traditional love story but everything is presented differently.

“It is hopeful, romantic and funny but also messy in the way that life is messy. We don’t shy away from showing what happens when three people fall in love, and in lust, with each other. There is a huge amount of chemistry between our cast and the heat of it all is shown on screen.”

Filming started soon after the same channel hosted a documentary by Louis Theroux about polyamory, the idea that people can have a three-headed or even four-headed relationship. But while Theroux’s doc focused on the sadness of some of those who seemed to have been forced into sharing their partner, this drama, written by real-life couple and playwrights Duncan Macmillan and Effie Woods, looks at how it can work – even if it is not without teething problems.

“It has been written in a way that our characters are as equal as we can make them; we didn’t want this to be about one person making a huge compromise, as we feel these three have got something special,” says Cooper. “It is a controversial subject matter but we are portraying it in the least shockable way – it is relatable. We don’t shy away from examining how these things aren’t easy. People have been talking about living this kind of life for many decades – about open relationships and that sort of thing – and it’s still something that hasn’t really caught on.

“There are no role models for this kind of relationship, so they are working out the rules as they go along. We examine how there is some jealousy but also how being in this kind of structure means the relationship is less intense – when someone is at odds with someone else, there is help in smoothing the situation. We show the beauty of this relationship but also the trickiness. Lots of people around them don’t understand it and immediately disapprove.”

The show centres on paramedic Kieran, an ex-soldier played by Gary Carr (The Deuce), and restaurateur Gemma, played by Thalissa Teixeira (The Musketeers), who have been dating for seven years after meeting on holiday. With work commitments meaning they barely see each other, they have long been aware that something needs to change in their relationship and are contemplating marriage. However, the change ends up coming from an unexpected source after the introduction of another person into their lives.

When Gemma’s first restaurant puts a strain on the couple’s finances, they take on a lodger, Ray, played by French actor Ariane Labed (The Lobster). The three quickly become close friends, and the couple gradually find that they are both falling in love with her.

“Ray is an ex-Olympian, a synchronised swimmer, whose life has changed after an accident that forced her to give up her career,” says Labed, who went through several weeks of synchronised swimming training before she started rehearsals. “She is almost starting from zero when she moves in with Kieran and Gemma, as she has only ever lived at home. But she is open to new adventures.

“The first evening she moves in, she kind of invites herself out with them. And from the start, there is this amazing chemistry and something special happens between the three of them. The way she enters their life feels very genuine – she never feels like an interloper. For quite a while, none of them can put into words quite how they are feeling.”

Carr adds: “There is an instant admiration but everything else is quite a slow-burn thing. They both just love being with her; they like her newness and the way she has thrown everything aside to start afresh. Kieran and Gemma are at a point where they need to kickstart their relationship, and they see something amazingly courageous in Ray. In some ways, through her admiration for them, they see their relationship through new eyes and it’s quite beautiful. Gemma and Kieran start to see all the things Ray adores about their partner as a new thing again.”

All three actors hope the story will open up conversations about love, and how we live as humans, among the audience. “Gemma, Kieran and Ray are making up the rules as they go along,” says Teixeira. “But the idea of a relationship like this is really ancient. I am surrounded by friends who have tried all sorts of ways of being with each other, and one key point is honesty.

“The interesting thing is how it rubs up against conventionality. There is an episode where they introduce the idea to their families, who are shocked. That perspective might be echoed in what the audience thinks, but the story is written with so much care that I think it will help people open up about their own feelings. Quite often, we hide things – but maybe it is best to be honest. Sometimes it can take courage to speak up about who you love.”

The three points in Trigonometry’s triangle are fairly unknown actors – a risk Cooper admits she was surprised BBC2 took with this new drama. “They have been incredibly supportive of all our cast, who all have loads of experience but aren’t that well known yet,” she says. “The casting process was quite tricky because we had to ensure there was chemistry between the three of them and they all lived in different places.

“If the dynamic was wrong, the whole thing would feel wrong. But we feel so much confidence in the three of them together. There was a spark from the start and that has grown into something special, as they have to really trust each other on a show like this. They have a chemistry you want to watch.”

Taking the lead director role is Greek filmmaker Athina Tsangari – whose 2015 film Chevalier was named best film at the BFI London Film Festival – in her first British television job. “She’s never worked in this country before, but she’s helped make the whole thing just magical,” says Cooper. “Our first day’s filming, which is normally quite a difficult day, was one of the best experiences I’ve ever had in this job. On the night they go to the pub, there is a drag night and we had 30-odd drag queens in this pub, which was just fantastic. We are showing a very authentic London in all its glory.”

Tsangari has given the series a cinematic look and has also encouraged the actors to improvise. “We don’t know what it’s going to look like when its finished, but Athina has encouraged loads of ad-libbing,” says Teixeira. “Because we are all comfortable with our characters, she will often leave the cameras rolling after we’ve done a scene to see what else she can get from us. There is so much going on in every line – jealousy, confusion, frustration, lust – and it’s fun to play around with it.”

However, some scenes were planned in great detail, including the first three-way sex scene. “I knew there was going to be a sex scene but I had seen Athina’s work and felt comfortable she would do it well,” adds Teixeira. “It was choreographed like a dance or a moving sculpture.On the day we did it, we ate cheese and drank wine. We all felt fine about it because it is very beautiful but also very funny; there are moments where one of us can’t get our trousers off. It is agonising and awkward, just like it is for everyone.”

“These characters go through an enormous story arc and it does have an ending that doesn’t leave things dangling,” says Cooper. “But this is also a story that could run and run; how they navigate things and this relationship going forward is always going to be interesting.”