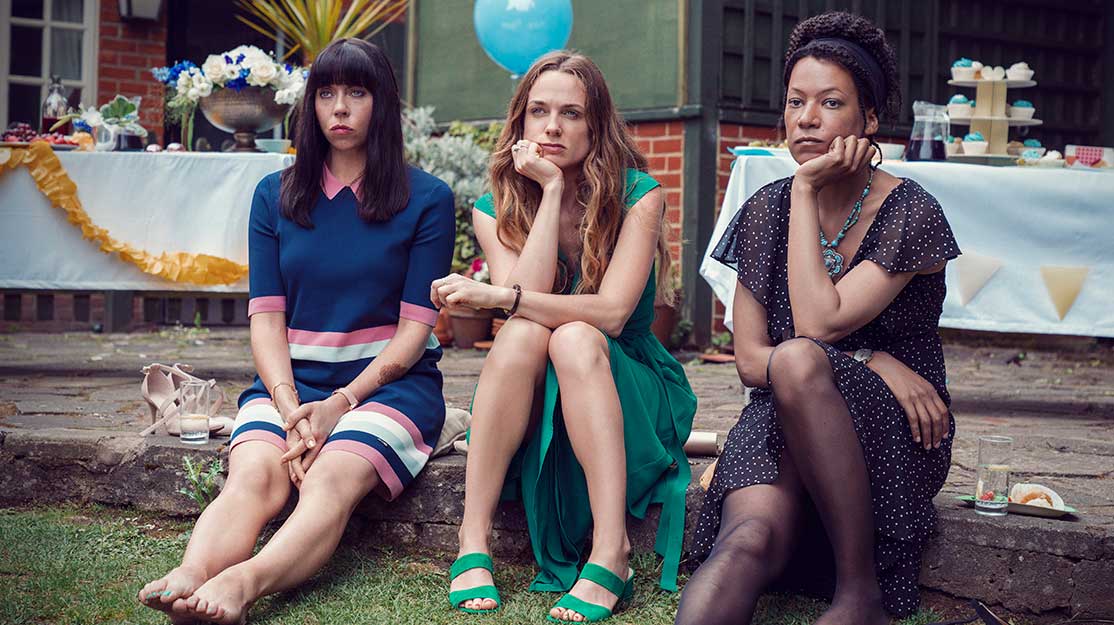 The Verge of success

Three friends find their lives are moving backwards in Women on the Verge, a comedy-drama based on Lorna Martin’s bestselling autobiography. DQ speaks to Martin and producer Gavin O’Grady about making the six-part series for UKTV’s W and RTÉ in Ireland.

To say Women on the Verge has been a long time in the making might be something of an understatement. Executive producer Sharon Horgan admits as much.

The actor, writer and producer best known for Catastrophe had received a copy of Lorna Martin’s autobiographical book Woman on the Verge of a Nervous Breakdown but, like many parcels delivered to her home, it lay unopened for some time.

“I’m not very good at opening parcels,” Horgan says, “so it sat down by my front door for a while and then I opened the parcel and I added it to the pile of books I always keep on my bedside table.”

When she finally read it, while on holiday about a year later, she loved it and immediately partnered with the author to develop a television adaptation of the memoir, which itself is based on Martin’s magazine column Conversations With My Therapist.

That was in 2011. Since then, Horgan and Martin wrote the first episode together, before Martin took on the remaining five – her first time writing for television.

“She’s such a legend,” Horgan says of Martin. “She stayed with it and stayed enthused and only wanted to walk off once or twice maybe. Once was a week before production, so that made us a bit nervous, but it was all about finding the right home for it.”

The right network proved to be UKTV’s W, with RTÉ in Ireland also partnering on the Dublin-set series that is coproduced by Horgan’s Merman and House Productions.

Equal parts funny, frank and shocking, the dark half-hour drama follows three friends struggling to survive their 30s. Laura (played by Kerry Condon), a journalist sleeping with her boss, is persuaded by Katie (Nina Sosanya) to seek professional help to deal with her many issues and begins sessions with the enigmatic Dr F (Horgan).

Meanwhile, divorced and single Katie is hoping to ‘complete’ her family without a man and have a sibling for daughter Ella through IVF treatment, while Alison (Eileen Walsh) finds herself back with her uninspiring ex-boyfriend.

Martin says it was a “lovely surprise” when she received that first email from Horgan – pre-Catastrophe, post-Pulling – enquiring about her book. She hadn’t previously considered adapting it for the screen, so happy had she been to see the back of it once it was published.

“It felt like there were such mixed and complicated reasons for writing it,” she explains. “It had been a dream to write a book but, once it was out there, I had mixed feelings about it – why would you put your very flawed life out there? Although there are some virtuous and altruistic reasons that you hope it will resonate and give people a laugh at the same time, it was painful and you are exploiting yourself for other people’s entertainment.”

Very quickly it became clear that the only way Glaswegian Martin could dramatise her life was to put as much distance between her and the characters as possible. That the story was moved to Dublin helped to give the show a life of its own and not have it just reflect “the mess and car crash I was” during a period of her life. “It does make it feel like it’s not a documentary,” she adds.

With Martin taking control of the remainder of the series after writing the opening episode alongside Horgan, she admits she found episode two “unbelievably difficult” to write, with no deadline or full series commission at that point. “A bit of me thought it wasn’t going to happen,” she says. “I found that really difficult – partly the fear of can I do this myself? It was just the fear of writing.”

The arrival of producer Gavin O’Grady in March this year helped Martin to focus the story, as the writer admits she had tried to be funny, apparently without much success. After submitting a draft of episode four, “Sharon called me and said, very diplomatically, ‘This needs a lot of work,’” Martin recalls. “She said to me the best advice is to stop trying to be funny and to be truthful, and that funny would come. It’s a fine line to get right.

“It was a big learning thing for me. I’m not a stand-up or gag writer. It was on episode four where I tried to write a sitcom and it was ripped up. A lot of it went. It just had to be believable.”

The writer describes watching the first cuts of the series as “the strangest thing I have ever seen,” a version of her life crossed with something she had written. “I cannot describe how weird that was. I had to watch it four times before I was watching a show,” she adds. “By episode three, I was getting used to it having a life of its own and not seeing it as my life.”

When O’Grady joined the production, there was no episode five or six, with only a very early draft of episode four written. Two months later, shooting was due to begin, with W announcing the series in June.

Alongside Martin, they worked out where they wanted the characters to land at the end of episode six, which meant some rewriting of earlier episodes was needed. He also jumped straight into casting, with the series requiring an ensemble of predominantly Irish actors.

With Condon based in LA, the leading trio weren’t able to test together before production ramped up. But O’Grady says all three bring different things to the series: “They look brilliant together and all represent what feels like very different ideas of being women and being on edge. With the casting, the biggest thing was what the tone of the show would be. For us, it had to be believable, and those three actors are very good at doing drama and comedy in a way that feels real and natural. You still want it to be funny, but what comedy does is push the realms of believability and reality to get those laughs, whereas we couldn’t do that. We had to work a bit harder to make things funny and not compromise the credibility of the characters for a gag.”

Filming took place across six weeks from the end of May, with interiors filmed in London for four weeks before production moved across the Irish Sea to spend two weeks filming on location. O’Grady says the biggest challenge on the show was the split shoot, which required several planning trips during pre-production before a new crew was brought in for the Dublin-set scenes. “We took essential department heads out but everyone else was replaced,” he says. “We wrapped London and three days later we were filming in Dublin with all new props people, production design and assistants, all while trying to keep that momentum and those lines of communication open.”

The future looks bleak for Laura, Katie and Eileen, however, with O’Grady hinting that the characters all find themselves worse off by the season’s end. Though she is seeking therapy, Laura in particular begins to self-destruct, her affair with her boss bringing her to the edge of breaking point.

Despite comparisons to other female-led series, the producer says Women on the Verge stands out for its naturalistic and believable style. “It’s being compared to Sex & the City, which is understandable,” he notes, “but their lives always looked so great, even when they weren’t wearing amazing clothes, going to amazing bars or living in amazing apartments. Whereas we’ve not done that. We don’t glamorise it. It’s a lot more real.”

Season two may be some way off, especially if it follows the lead of the first season, which launches on W in the UK tomorrow. Martin and O’Grady are, however, already talking about where they might like to take the characters next, particularly now they have seen how the actors have embodied them.

“Now we can play to their strengths,” O’Grady adds. “We’re bouncing ideas around of what we could do, where we could go and the kinds of things we could throw at them.”

With Women on the Verge finding humour in the depths of despair, it looks set to follow the path of other successful comedy-dramas like Catastrophe, Fleabag and, more recently, Karl Pilkington’s Sick of It.