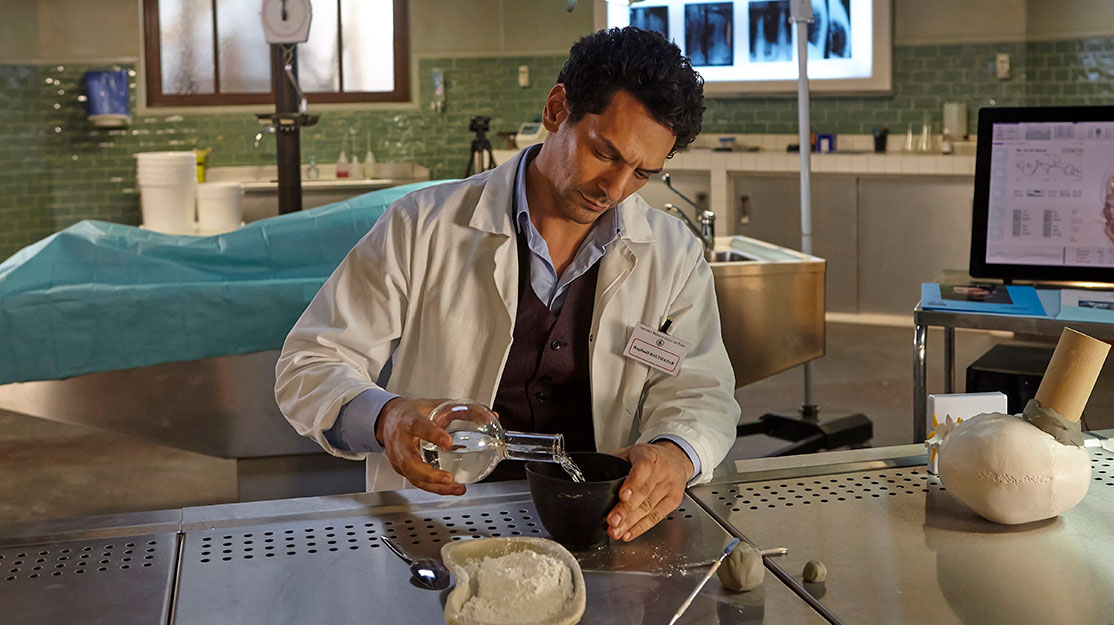 Described as charming, handsome and intelligent, forensic pathologist Raphaël Balthazar is both fascinating and furious in his desire to live life to the full, often in defiance of norms and conventions. This proves to be a major challenge for police commander Hélène Bach, a mother and the newest member of the Criminal Brigade who partners with Balthazar to solve some of the most complex murders they have ever faced.

Tomer Sisley (Eyewitness) and Hélène de Fougerolles (Le secret d’Elise) lead the cast as Balthazar and Bach respectively, in a series directed by Frédéric Berthe, Vincent Jamain and Jeremy Minui and written by Clothilde Jamin and Clélia Constantine. The six-part drama, due to air by the end of this year, is produced by Beaubourg Stories for France’s TF1 and distributed by ITV Studios Global Entertainment (ITVSGE).

Beaubourg Stories sets itself apart from other production companies in France by employing full-time writers who also produce the series they have created, using many characteristics of the US showrunning model. The model was inspired by French cinema’s auteur system, with Beaubourg MD and Balthazar producer Stephane Marsil keen to utilise the creative benefits that come with writers producing their own work. Balthazar is the latest series to emerge from this model, following previous series Falco and Profilage.

“I’m not sure it’s for everyone but, for me, it’s the best way to work,” says co-writer Jamin. “You can follow every discussion and be part of the casting. That’s how you write well when you’re part of the show from the beginning. I love to work with Stephane. It’s a very good idea he had.”

Jamin and Constantine were keen to collaborate on a series about people who work daily with something most people would rather forget or ignore – death – and how that affects them. “Death is the only thing we don’t control,” says Jamin. “We really wanted to go deeper and deeper on this character. He’s a charming and mysterious coroner, working with death every day. He loves the job more than his wife. He’s a sexy, funny man and he teams up with a cop, so every episode they have a case they have to solve together. It’s all about these two very different people trying to work together.”

Though they initially clash over their opposing lifestyles – one enjoying life too much and the other having forgotten how to live – Jamin says the two main characters actually have a lot in common. Their contrasting worlds are explored each week as they take on a new case that puts them in challenging situations.

The co-writers spent a lot of time talking over the characters and the plotlines, and shared the desire for Sisley to play the lead role as Balthazar took shape on the page. “Now seeing him play for us is great. We were very excited,” Jamin says.

Marsil continues: “Tomer liked the project, the character, everything. He read the scripts of the first two episodes and directly said he wanted to do it. It was very quick. He was the first choice. It was amazing.”

But Balthazar isn’t just any coroner. What sets him apart from other investigators is his ability to talk to the dead. While examining a body laid out in front of him on the mortuary table, he is able to conjure the image of that person beside him, talking through the case with the deceased in an effort to help him understand what has happened and who might have been behind it.

It’s a device that is used to both humanise the deceased characters, who are presented as ‘normal’ rather than in a ghostly or blood-stained fashion, and reveal more about Balthazar himself. Little is initially revealed about the lead character, except that he lives alone after the death of his wife and shares little about his life. But his conversations with the dead slowly reveal more about his own life and the way his mind works to solve cases.

“They are not ghosts. He imagines that people on his table talk to him,” Jamin says. “We wanted to find out how to humanise the people he works on. So he speaks to his dead wife; you see her on the table or at the window. We see them somewhere in the room. But the body is also still on the table.”

Beubourg operates studios on the outskirts of Paris, near Orly, where 50% of its series are filmed. Remaining scenes are filmed in and around the French capital. In this regard, Balthazar follows the same production process as other dramas from the company.

On this show in particular, the studio was used to film Balthazar’s apartment and the hospital. The big question, however, was whether to build the mortuary where he works. They could not use the one in Paris, so they either had to construct their own set or find another location out of town. Eventually, Marsil took the decision to build it. “It was very expensive but, because we have studios, we can do that. TF1 was very happy,” he adds.

Marsil and Jamin are now collaborating on eight new episodes for season two, with shooting expected to begin in February next year. And while TF1 is clearly pleased with the series, international audiences also stand to be “pleasantly surprised” by this crime procedural, says Julie Meldal-Johnsen, exec VP of global content at ITVSGE. “They will be seduced by the charm and mischievousness of Raphaël, who really makes the series unique.”

Meldal-Johnsen also believes the series “reinvigorates” the procedural genre with a modern touch that aims to appeal to a broad audience. “The writers have found a very clever way to share Balthazar’s thoughts with viewers [via his discussions with the dead],” she notes. “The technique used is wonderfully executed and works amazingly on screen. It opens the door to his concerns, his desires and his weaknesses, and helps the viewers understand him and his past better.”

Crime stories continue to appeal to viewers the world over, containing some or all of the elements traditionally associated with the genre: whodunnit mysteries, good versus evil, jeopardy, suspense, high stakes and the satisfaction of seeing justice done or the guilty pleasure of someone getting away with it.

As a result, “finding new and engaging ways of telling crime stories is getting harder, but it is very rewarding dramatically and commercially too,” Meldal-Johsen says. “Audiences love getting a chance to dive into the the different worlds these shows create, which can vary hugely from garden crime to organised crime, as well as in tone from Nordic noir to lighter comedy.

“As a distributor, finding the right story or concept takes forging relationships with producers who understand the craft of storytelling required to keep it fresh,” she adds. “Episodic procedurals are especially tough to crack and need very talented writers and producers. We are lucky enough to work with Stephane and his team at Beaubourg, who have proven to be adept at contemporary crime – and Balthazar is a fine example of their skill.”