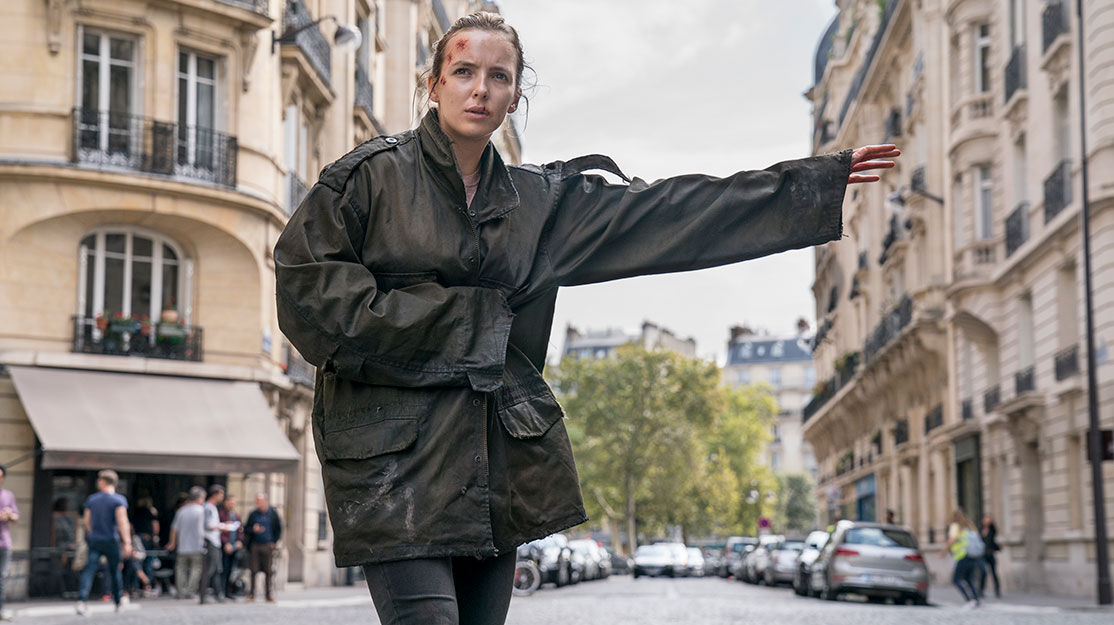 With TV drama occupying an increasingly lofty position in the minds of viewers and talent alike, it’s not uncommon these days for big new shows to be given premieres comparable to those usually reserved for Hollywood blockbusters.

Indeed, an esteemed London location complete with free-flowing wine and delicately assembled canapés is par for the course when it comes to providing the first glimpse of any drama series a major broadcaster gives two hoots about.

So it’s indicative of the reverence in which Killing Eve is held that the UK premiere for the spy thriller’s second season felt like a notch above, even in this landscape. At a preposterously packed Curzon cinema in Soho, the red carpet was quite literally rolled out for the stars of the BBC America hit, with DQ barely able to squeeze through the throng to grab a well-deserved glass of said wine.

Despite mostly comprising journalists and those who worked on the show, the attendees’ excitement at being among the first in the country to see Killing Eve’s return was palpable, with a steady succession of people being told politely but firmly to ‘please wait for the announcement’ as they attempted to get into the auditorium early and secure the best seats.

High expectations are natural when a show’s debut season performs as well as Killing Eve’s, drawing both critical and audience acclaim and becoming one of VoD platform BBC iPlayer’s most popular shows ever.

For those in the dark, the series stars Sandra Oh as intelligence agent Eve Polastri, who becomes obsessed with the slippery, psychopathic assassin she is attempting to apprehend, Jodie Comer’s Villanelle.

The second season has just finished airing stateside on BBC America ahead of hitting UK screens on BBC1 this Saturday. It will air weekly on the linear network, while all episodes will again be made available simultaneously on iPlayer.

Based on Luke Jennings’ Codename Villanelle novella series, the first season saw Eve and Villanelle’s unique game of cat and mouse unfold across Europe, climaxing with Eve stabbing Villanelle during a tender moment in the trained killer’s Paris apartment. The supporting cast is led by Fiona Shaw as Eve’s boss, Carolyn Martens, and Kim Bodnia as Villanelle’s handler, Konstantin. One notable addition to this year’s cast is The Mighty Boosh star Julian Barratt, as a loner who encounters Villanelle in the first episode.

Off camera, the most significant change for season two is that head writer Phoebe Waller-Bridge, creator and star of the equally critic-pleasing Fleabag, has taken a back seat, remaining an executive producer while Emerald Fennell takes the writing reins.

An author and actor best known for playing nurse Patsy Mount in BBC period drama Call the Midwife and due to play Camilla Parker Bowles in the third season of Netflix’s The Crown, Fennell’s appointment as head writer on Killing Eve represents a significant step up. However, any fears that the switch would impact the show’s singular style evaporate in the opening scene – which takes place just seconds after the end of the first season – with the drama again smoothly combining laugh-out-loud moments with abrupt and sometimes brutal violence.

Exec producer Sally Woodward Gentle of producer Sid Gentle Films says: “We’d worked with Emerald before as an actor and also as a writer – we’ve optioned various books that she’s written. She’s also a very good friend of Phoebe, so it felt like a natural handing-on.

“She’s got an amazingly dark sense of humour and a fearlessness like Phoebe had. But at the same time, she didn’t just want to ‘do a Phoebe.’ She wanted to inhabit it herself, and I think she’s done that brilliantly.

“Emerald’s got a brilliant deadpan, dark sense of humour, and the more deadpan she plays it, the funnier it gets. They are really funny episodes, and Phoebe is just hilarious. So between the two of them, they’re a really good mix.”

Comer, who recently won the best actress Bafta for her performance in the show, adds: “The writing is absolutely different. Phoebe and Emerald are so similar but they’re genius writers in their own right. I feel like Emerald really captured the heart of the show and the characters. We’ve got a really strong star.”

With Woodward Gentle, Waller-Bridge and Fennell steering things off camera and Comer and Oh front and centre on screen, Killing Eve is very much a women-led project, despite being based on a property created by a man. “We read Luke’s books and really liked them and enjoyed this female assassin, enjoyed the fact there were two women [as the main characters],” Woodward Gentle says. “But to give that a female spin, and tell that story via a woman, we felt was a far more interesting way into it and something we hadn’t really seen before.

“We’ve seen female assassins actually behaving in quite a two-dimensional way [in other movies and series]. Having a woman write it and giving all those layers to the women in all of the roles was what excited us and made us think that this was not going to be La Femme Nikita or something else that we’ve seen.

“But we’ve also got some phenomenal men who work on the show, so it’s really a combination of some extraordinary women and some quite sweet, slightly capable men,” the exec producer jokes.

Comer says she feels “extremely lucky” that her past five parts have been written by women, with her recent roles coming in shows such as Starz period drama The White Princess, written by Emma Frost, and Marnie Dickens’ BBC series Thirteen.

“I feel as though a lot of the roles I’ve played have been complex and challenging, and Villanelle is the cherry on the cake,” she says. “As an actress and a human being, you want to be challenged and to push yourself into new depths that you may not have been to before. These scripts and this show definitely give me that.”

As Russian Villanelle, Liverpudlian Comer uses practically every accent other than her own to play the deceptive globe-trotting assassin, effortlessly slipping from native-sounding French to posh English southerner. But rather than any formal training, Comer puts her vocal authenticity down to her childhood. “Growing up, me and my dad, if there was an advert on the telly with someone with a silly voice, we’d always impersonate it around the house, joking around. And I think, through doing that, I’ve now got an ear for it.

“Some are a lot harder than others, don’t get me wrong – I do have to concentrate and work. For me it helps because, when I’m doing my own accent, I find it harder to separate myself from the character for some. But also you don’t see a lot of Scousers on the telly, so maybe we need to change that up a little bit!”

Season two begins with a badly wounded Villanelle fleeing her apartment and evading the authorities on the way to seeking urgently needed medical treatment. Eve, shaken up from the pair’s encounter and unsure of Villanelle’s fate, hurriedly returns to London, where she soon begins working with Carolyn again despite ostensibly being sacked in season one.

Comer clearly relished returning to the character that has made her a star on both sides of the Atlantic. Discussing the appeal of playing Villanelle, she says: “She’s so free; she has no sense of consequence or fear.”

Turning to Woodward Gentle, the actor adds: “I remember you saying, Sally, ‘What would it be like to wake up and have no fear?’ To be able to play that, it is literally playing. You get to do all this crazy stuff and express all these emotions, or lack of emotions. It’s so much fun to play.”

A large amount of that fun can apparently be found in the scenes where Villanelle kills people. “What I really enjoy about the murders in the show,” says Comer, pausing at the absurdity of her statement, “is that they’re not always what you expect. Honestly, the murders are the best days on set, purely because most of the time they’re outrageous. Nothing’s ever quite what you think. It’s just so much fun.”

The actor admits to being surprised by the direction the story takes in the second run. While Villanelle found herself reciprocating her pursuer’s infatuation with her throughout the first season, it’s reasonable to assume being stabbed would puncture those feelings, with the actor expecting her character to think, “It’s payback time.” But in fact, the opposite is true: in Villanelle’s eyes, Eve – to whom she now refers as her “girlfriend” – stabbed her “to show me that she loves me.”

That seemingly bizarre conclusion is typical of the complex and contradictory relationship that drives the series. Woodward Gentle offers some insight: “We actually talked to a psychologist who is used to working with psychopaths and asked, ‘What would that stabbing mean?’ He said that it could actually mean several things: it could just raise fury and a sense of revenge, or it could confirm everything that [Villanelle] thought, which is that there is this great intimacy between them; that now they’ve bonded and it’s confirmed that they have a very special relationship. We play off both those possibilities as we run through the series.”

Despite their characters’ connection being central to the show, Comer didn’t share a great deal of screen time with Grey’s Anatomy star Oh – whom she beat to the best actress Bafta last month after Oh triumphed at the Golden Globes last year – in season one. “We’re like passing ships really, or we were in season one,” Comer says. “Whenever Sandra was in, I wasn’t, which actually kind of added to the tension when we did get together. It felt so charged.”

However, she teases more interaction between the central duo this time around. “Within season two, they do come into contact a little bit more – under what circumstances that is, I cannot say. Whenever we get together on set, we find another piece of the puzzle. We still don’t have a lot of the answers, which I don’t mind. I find it quite exciting.”

Comer’s sentiment will likely be shared by UK viewers ahead of Killing Eve’s return, after its airing across the pond drew acclaim equal to that for the first season. With a third run already confirmed, it won’t be long before that red carpet has to be rolled out again – hopefully in a more spacious venue this time.