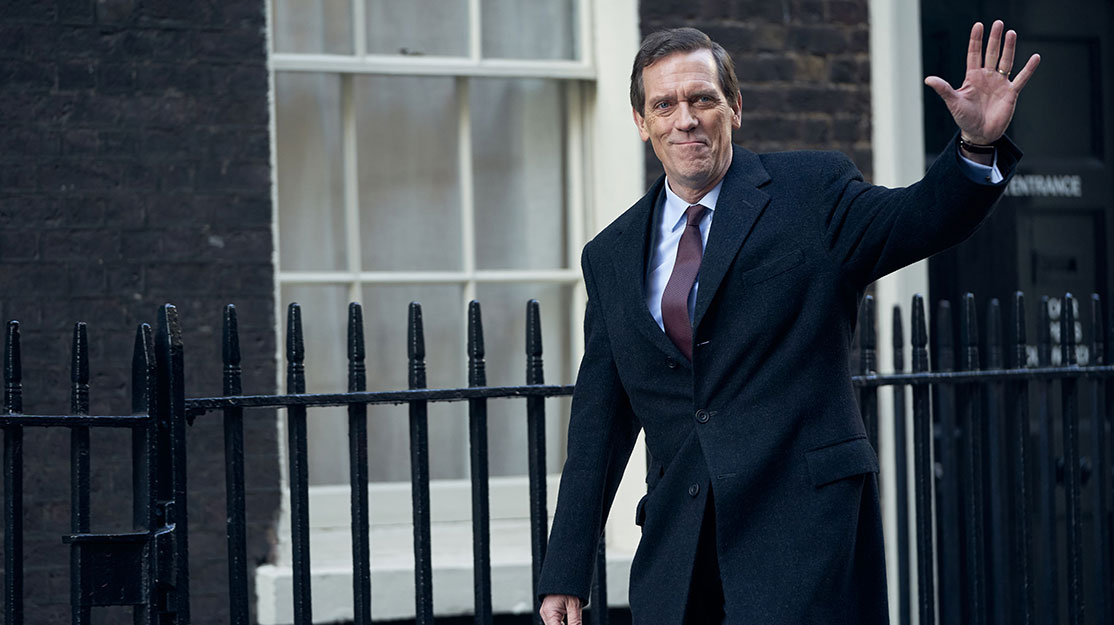 The politics of shame

Stars Hugh Laurie, Helen McCrory and Pippa Bennett-Warner join writer David Hare to discuss his four-part miniseries Roadkill, about a shameless politician pursuing his ambitions while others plot to bring him down.

The thought of roadkill immediately brings to mind the image of a poor hedgehog, fox or badger flattened on the side of a motorway. But in his new series, Roadkill creator and writer David Hare applies that idea to modern politicians who might once have been brought down by their actions but now simply keep calm and carry on.

“One of the things I’m writing about is the idea of disgrace, and I suppose you could say of 21st century politics that it’s disappeared from public life,” Hare says of the four-part political thriller. “In the 20th century, if you did something wrong, like Jeremy Thorpe or John Profumo, you had to apologise and leave public life. Nowadays that’s no longer true, and there doesn’t seem to be anything now that constitutes disgrace.

“One of the things the series asks is can you actually do something bad enough to get thrown out of public life? It seems to be absolutely impossible now. It’s a principle of public life that you never admit error and you never apologise for error. I don’t know when this happened, but we’ve crossed into a world in which people believe you can brazen everything out. I wanted to write about that new feeling that if you were roadkill, then all you did was get up off the road, dust yourself down and march on and just be brazen about everything.”

House and The Night Manager star Hugh Laurie leads Roadkill’s ensemble cast as Peter Laurence, a self-made, forceful and charismatic politician whose personal and political life appears to be falling apart – or is being picked apart by his enemies.

As the personal revelations spiral, he is shamelessly untroubled by guilt or remorse, expertly walking a high wire between glory and catastrophe as he seeks to further his own agenda while others plot to bring him down. But with enemies so close to home, can he ever outrun his secrets?

Hare has previously written plays about politics, most notably The Absence of War. And while his previous BBC drama Collateral shone a light on the detention system, he also wanted Roadkill to explore the British prison system, which he says is a “disgrace” and is examined through a storyline involving Peter’s illegitimate daughter. The press is also in his sights, with a storyline that questions how much power journalists have today and the plight of investigative journalism.

Distributed by All3Media International, the series begins with Peter in court, suing a newspaper in a libel case. When he wins the case, he avoids the end of his political career and instead presses on with his campaign to rise to the top of government.

“He has ambitions to move up the greasy pole and the story is about the price he’s prepared to pay to get to that top position, and the price he forces everyone else to pay – principally his family, but also those who pledge their loyalty to him,” explains Laurie.

“I would say Peter Laurence is a man who’s relatively free of the gravity of guilt. He’s a man whose life mission is to keep moving forward and not to look back. Guilt is essentially a retrospective emotion. It’s about looking back and contemplating on the things you didn’t do and should have done or did do and shouldn’t have done. The way to live life is to almost put blinkers on and say, ‘Forwards, always forwards. There’s always tomorrow. There’s always a solution to every problem.’ He’s free of guilt, and forward movement is his motto.”

Laurie says reuniting with Hare – they first worked together on 1989 feature Strapless – has been “enormously enjoyable,” as has acting alongside his “sublime” co-stars.

“The dialogue is funny in places, although it’s not trying to be satirical. It has a wit to it and it has a force and a jaggedness, which I like a lot,” he continues. “You’re not told who to like. You may like some of these people and not others. You may like them some of the time and not other times because they are complicated and they do bad things for good reasons and good things for bad reasons. There are things Peter Laurence does and says that are just appalling – and then other times, I sort of see what he means. There is a sort of compassion and a generosity and an energy to him, a sort of a vitality to him, which I really like and admire.”

Meanwhile, McCrory plays prime minister Dawn Ellison, who at the start of the story finds her job and the country in a perilous position. After Peter wins his court case, he also wins popularity within the party and the general public, and Dawn decides to take him on.

“Her journey is about politics and about personal politics,” Peaky Blinders star McCrory says. “She’s quite funny because she’s so blinkered and because she’s arrogant. You don’t recognise anybody when you read it. But I did actually ask David, ‘Is there anyone I should look at?’ And he said, ‘No, God, I mean, we’ve had some bad ones, but no one is as bad as Dawn.’ What I hope is recognisable are some of the characteristics of bad politicians.”

The challenge Dawn faces from Peter is that because of their different backgrounds – Peter is a former carpet salesman while she has been primed for office her whole life – she doesn’t realise how dangerous he is.

“She realises he’s popular and he’s highly ambitious, as she is. And he’s without scruples, as she is,” McCrory says. “Her flaw in it is that she trusts. She thinks if somebody says black is black, it’s black, because that’s how life has always been for Dawn. With Peter, she misjudges him because there’s another way of doing something apart from the way she does it. It’s all about her being blinkered. David’s obviously intentionally written her as a very blinkered character.”

Hare creates a “merry war” between the two characters, replicating the complicated rivalries that often develop at the top of politics. The third main character is newspaper journalist Charmian Pepper (Greene), an alcoholic whose life is in a mess. She loses the court case against Peter and subsequently loses the confidence of her editor, but she has a resilience that brings her back to the case.

“The fourth central character is Rochelle Madeley, the brilliant young lawyer who has successfully defended Peter Laurence while maintaining the suspicion he may be guilty,” Hare says. “Rochelle is a woman who is shrewd enough to know that the person that she’s defending may not be as innocent as he seems, and the show really explores that dilemma lawyers have.”

Played by Bennett-Warner, Rochelle is a slick operator and extremely competent lawyer who, across the four episodes, goes on a journey of morality that ultimately sees her putting her career on the line to bring Peter down.

“Peter’s just another minister. She’s used to dealing with this kind of stuff, these kinds of people, this kind of behaviour,” Bennett-Warner explains. “She’s doesn’t get emotionally attached to anything. She’s very much doing her job. It’s all about winning.


“Then there are a couple of scenes when she’s driving home and Peter is on the radio. At that point, she’s completely fed up with hearing his voice and does not care about him. I quite like that as a journey. In the beginning, he’s just another client, really. But by the end of the piece, she’s emotionally invested in taking him down.”

The actor says she hasn’t played a character like Rochelle before and was keen to work with Hare. “There’s something about David’s writing where each scene can feel like a mini play because he gives the actors so much to play with,” she notes. “There’s something in the writing that’s very specific. You can feel when it works and you can feel when you’re not quite hitting it. There is a rhythm to it. When you’re with your scene partner, you’re both dancing with this language. It feels wonderful.”

Both Laurie and Bennett-Warner believe the appeal of the series, directed by Michael Keillor, lies in the universality of the themes beneath its political facade.

“These people are universal because the centre of the show is also family, and everybody can relate to that,” Bennett-Warner says. “The new modern family is very much part of our society at the moment, with children from different parents and half-brothers and step-brothers and step-sisters. That element of it is very relatable. And people will find the political stuff relatable too because we’re in such a heated political time.”