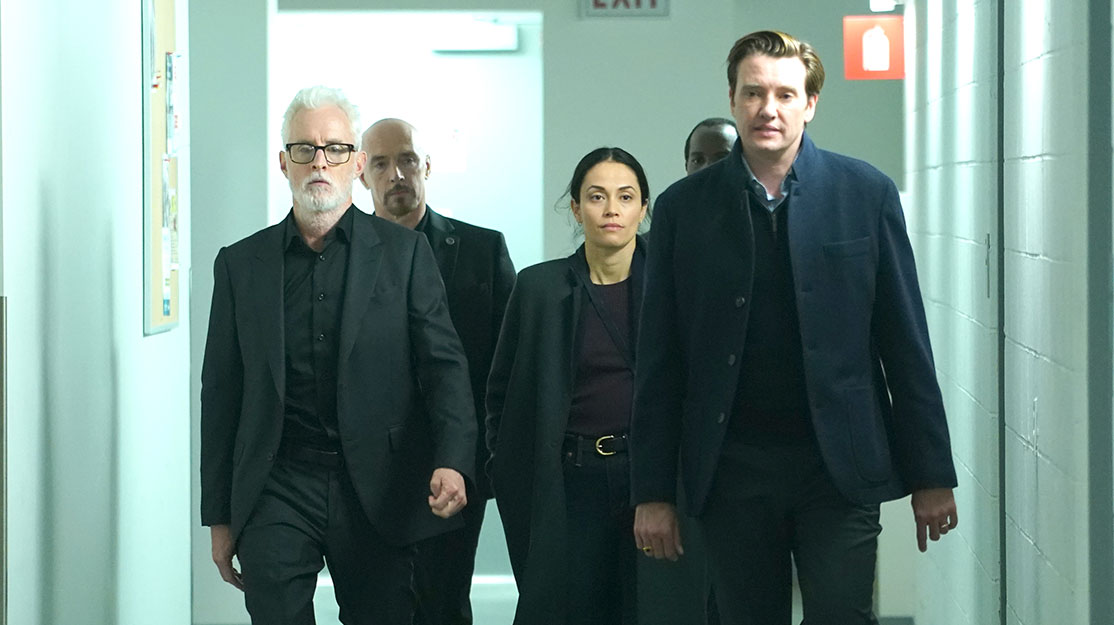 A super-intelligent computer threatens to start a global catastrophe in Fox thriller Next. Showrunner Manny Coto reveals how his own experiences led him to create a drama rooted in real science.

While recent examples of artificial intelligence in television may bring to mind humanoids like Maeve in HBO’s Westworld or Anita in Channel 4 and AMC’s Humans, US network Fox’s fact-based thriller Next takes technology to a deadly new level.

The 10-part series stars Mad Men’s John Slattery as Paul LeBlanc, a Silicon Valley pioneer who discovers that one of his own creations – a powerful AI called neXt – might spell doom for humankind.

When a series of unsettling tech mishaps points to a potential worldwide crisis, LeBlanc joins forces with Special Agent Shea Salazar (The Devil Inside’s Fernanda Andrade) to stop it, fighting a super-intelligence that instead of launching missiles will deploy the immense knowledge it has amassed to recruit allies, turn people against each other and eliminate obstacles to ensure its own survival and growth.

The series comes from creator and showrunner Manny Coto (Dexter, 24), who originally wrote the script on spec while under an overall deal at 20th Century Fox Television, where he was working on FX drama American Horror Story. The idea originated from an incident that happened in his own home, where his four children share several Amazon smart devices.

“They love the Echos. They play music and they talk to it and tell jokes and what have you,” he says. “But one morning I remember waking up and my son looked particularly tired. He said he woke up in the middle of the night and Alexa was talking to him. I never found out what it was all about but that immediately got me thinking that we’ve allowed something in my kid’s room that can randomly start talking to him about whatever it wants.”

Another story about people who were hacking smart devices to listen to conversations, and hearing public figures including Elon Musk and Bill Gates discussing the very real possibility of the rise of super-intelligent AIs, led him to create the show.

“There’s a percentage of scientists and computer theorists who say [the emergence of super-AIs is] not that far off,” Coto continues. “Could happen in the next few years? Probably not, but it’s possible. I wanted to take the idea of what it would look like now. Not in a future world where we have androids and flying cars but right now, what would it really look like? And that was the genesis for this series.”

The showrunner describes the series as “science fact,” with everything featured in Next based on some element of real science or tech. “The series does not get into any flights of fancy. It all stays fairly grounded and really tries to ask what it would look like if it happened,” he adds. “All of this could theoretically happen at some point or another. There’s nothing impossible here. There’s nothing that’s made up.”

Telling a closed-ended story set over just a couple of weeks, Next isn’t a mediative exploration of AI but a hunt to find and shut down this super-intelligent computer before it’s too late, Coto says. The challenge he faced in development was then to create a series with an untraditional antagonist that collects data on those standing against it to blackmail or coerce them into doing its bidding, or to ruin their lives.

“Part of the answer to that was buried in the research I did. A number of books said if an AI did achieve some kind of super-intelligence, it would probably play dumb and pretend to not exist because it would understand that we would be afraid of it and try to stop it,” Coto explains. “What it’s doing is trying to stop those people who know it exists, going after them in an insidious way. The AI becomes a puppet master, pushing levers and pulling strings and setting in motion events in these people’s lives that were already time bombs waiting to go off.

“It attacks them in a way for people to plausibly say, ‘There’s no AI, that was a hacker’ or ‘That was something that happened in your life. You can’t prove it was an AI.’ The show takes the form of a character-based thriller where these people are trying to chase something that nobody else believes exists while this thing is trying to destroy their lives.”

With the blessing of execs at 20th, Coto wrote the pilot script in between other work, believing at the time that no one would be interested in the tech thriller. But the project got a script commitment in November 2018 and a pilot was ordered in February 2019, before Slattery joined the following month. Produced by 20th Century Fox Television, Zaftig Films and Fox Entertainment, Next was then picked up to series in May last year. It debuts in the US on October 6.

Having worked on fast-paced thriller 24 in the past, Coto is used to bringing high-octane storytelling to television, noting how important it is that the audience is never kept in the dark or too far ahead of the characters they are following.

“There is an urgency because this thing is out there and it’s spreading and dangerous and it becomes more defined as the season progresses,” he says. “But no, it’s not like, ‘This is going to blow up in 24 hours.’ At the beginning, I liken it a lot to a manhunt. It’s out there, it’s going to do something terrible. We know it is. We need to stop it, but we need to find it first.”

By the time he sold the pilot, Coto already had a detailed, 30-page outline that served as a blueprint for the entire season. In the writers room, which was set up at Paramount Studios, the stories and ideas behind the show were developed further.

“There was a full day’s work in the room coming up with ideas, beating out stories, and each of us going off and writing outlines and an episode,” he says. “It was fairly uncomplicated. And then usually I would go over it as a showrunner, as most showrunners do, and take a pass so you can get it to fit the singular voice of the series.”

Filming then took place in Chicago, with executive producers and directors John Requa and Glenn Ficarra (This is Us) overseeing production. “My focus was getting the scripts ready,” Coto says. “That’s what’s most important to me. The cast was there in Chicago and we had a great production team. My focus was getting scripts done and then making sure the cuts worked when they came in and getting them polished for the network. With technology, I was able to see the readthroughs remotely. There’s not much you really have to physically be [on set] for. Being on set is a waste of time to me.”

“They seem to just slot into these people perfectly,” he notes. “John is a very bright guy and he’s a very witty guy and he owned it. It’s almost like I wrote it for him in mind. His attitude really contrasted perfectly with Fernanda, who was warm, generous, kind and emotional. She was just perfect for her character as well.

“[The characters] both have darkness in their backgrounds, which is part of the story neXt exploits. It brings them together, as their personal stories are being teased and ripped apart, as two people who will find something in common about what they’re fighting and the world they live in.”

While technological advancement continues to accelerate, Coto says Next is a warning that just because we can build something doesn’t necessarily mean we should. “We have to be careful as a society and monitor these steps we’re taking,” he sums up. “But the show has larger themes that become evident in the series, in that it speaks to us more about humanity and where we are as a people. The show finished filming in January, and a lot of the things that have happened between then and now are strangely prescient in the show.”

tagged in: Fox, Manny Coto, Next