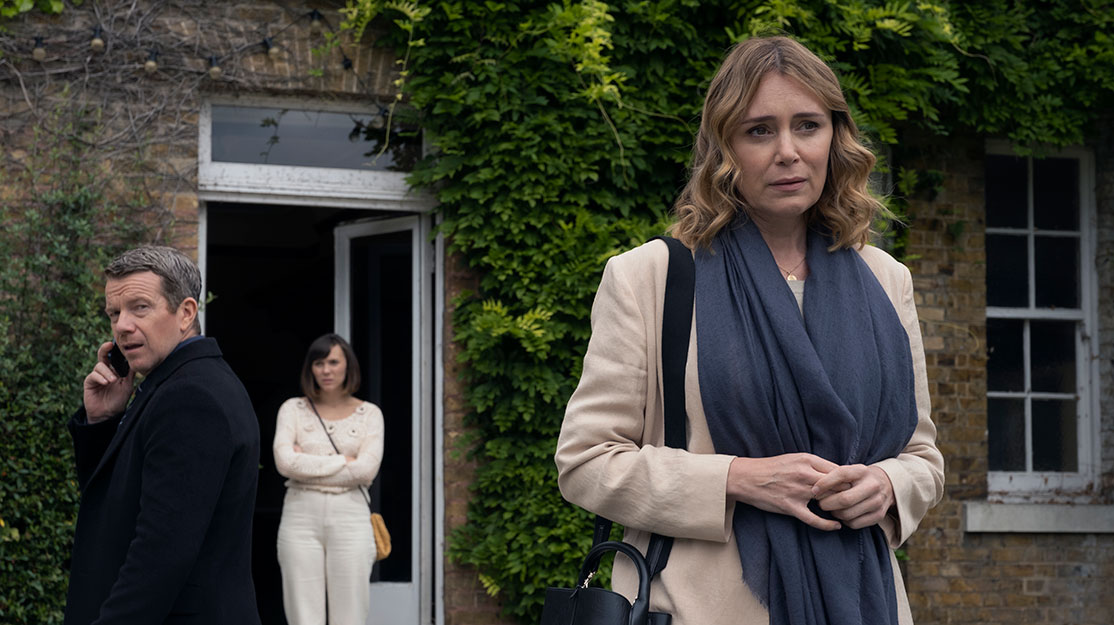 Keeley Hawes takes the lead in The Midwich Cuckoos, a modern adaptation of John Wyndham’s classic sci-fi novel. Writer David Farr and director Alice Troughton tell DQ about their shared love of the book and how they updated it for the screen.

As the inspiration for two feature films – including 1960’s Village of the Damned – and numerous pop culture references, John Wyndham’s novel The Midwich Cuckoos is assured of its place in the annals of British science fiction.

Now the 1957 novel has been reimagined for modern-day audiences as a seven-part series that is pitched as both a dark and unnerving fable and a thrilling, horrifying journey into parenthood that lays bare a mother or father’s worst fear – that the thing most precious to us may desire our destruction.

Written by David Farr (Hanna, The Night Manager) with Alice Troughton (Baghdad Central) as lead director, the series opens as the fictional small English commuter town of Midwich is plunged into a mysterious blackout, causing its residents to pass out on their feet. When the spell is lifted, life seemingly returns to normal – except that every woman of child-bearing age inside the affected area has inexplicably fallen pregnant.

Gifted psychologist Dr Susannah Zellaby (Keeley Hawes) is on hand to support those affected, with her own daughter Cassie (Synnøve Karlsen) harbouring deep concerns about who, or what, is behind the phenomenon.

Meanwhile, local police officer DCI Paul Haynes (Max Beesley) is tasked with maintaining order as the town’s new children flourish under the love and care their families give them. But who are these children and what do they want?

The Midwich Cuckoos is a passion project for Farr and Troughton, who both read Wyndham’s novel in their early teens. “It just totally stayed with me,” Farr tells DQ. “I was in this little town in Surrey, and it’s one of those remote community dramas where if you’re brought up in a small town, it resonates with you and you’re thinking, ‘Yeah, I live in this world where there’s this inherent dread of alienation.’”

Flash forward 30 or 40 years and, after a battle to secure the rights in the face of a potential Hollywood film, Farr found himself reinventing the story for the present. The series is now set to debut on Sky Max and streamer NOW tomorrow.

“A lot of young people don’t know Wyndham anymore,” the writer notes. “People say, ‘Oh, he’s a great icon,’ and he is genuinely great, but people don’t really know him. To have the opportunity to bring him [to television] in a very fresh way with some big changes – and focusing much more on the mothers, because obviously that’s what it’s really about – that is a real privilege.”

Farr was also excited at the prospect of partnering with Troughton, who came on board in support of the writer’s new vision of the story and also brought her own love of sci-fi to the table.

“What surprised me was how similar David and I were about it,” she says. “This, The Day of the Triffids [another Wyndham novel] and Doctor Who were part of my sci-fi education. They actually inspired quite a few bits in my episodes of Midwich. David’s script was just brilliant. It was so clever and bold and it was such a reinvention. It did need another gaze –it needed a female director – but we were very much on the same page. It’s been a joyous project.”

The biggest change Farr has made to the source material is changing the gender of the main character, Dr Zellaby, who is Gordon in the novel but Susannah in the series. A highly respected pillar of the community, Susannah is put under intense pressure with the arrival of the children as she struggles to understand their intentions.

“Obviously, getting Keeley Hawes was just fabulous,” the writer says. “She’s perfect because she can be very glamorous but she can also be very emotionally messy, which is what I wanted. As the show goes on, it goes to some pretty dark places for her.

“There’s not that much dialogue in the book, and some of this show is done a lot more through imagery, really. Then, of course, you develop the characters, so suddenly you think, ‘OK, she’s going to have a daughter and the daughter will have a child.’ That’s interesting because then you get into all the ghosts of having had your own child and what that brings up, like jealousy.”

It’s clear from episode one there are long-standing issues between Susannah and Cassie, who has addiction and mental health problems, and their relationship becomes the central spine through the series. But around them are an ensemble of characters who are affected by the events in Midwich in different ways. They include Jodie (Lara Rossi), who is visiting her sister Deborah from London; seemingly well-off couple Curtis and Rachel (Lewis Reeves and Hannah Tointon); and new residents Sam (Ukweli Roach) and Zoe (Aisling Loftus), who are hoping to start a family – and their wish comes true in the most unexpected way.

“Sam and Zoe are very important as well,” Farr says. “Zoe becomes a rebel in a way. She’s the one who sees clearly something’s wrong and resists, but she finds herself unable to do so, and that’s really interesting. Aisling Loftus is a wonderful actress.”

Also changed from the original story are the children themselves, who in the series all look like their ‘parents,’ rather than appearing identical to each other as in previous film versions.

“That doesn’t work in our narrative, because it doesn’t reflect the world we live in,” Farr says. “We live in an individualised world where we’re very consumerist. Also, very practically, you can’t hide in our world. In 1957 you can be a tiny village in Norfolk and no one will know you’re there. It’s not true now, so that whole idea that they can hide in plain sight and then they become more insidious doesn’t work. They attach much more because they look like the mothers, they don’t look like the fathers, so suddenly out of that comes a different, more modern idea around attachment and love as a control mechanism and other such wonderful ideas.”

“We equally track the actions of all our couples, and everyone has a very different reaction to it,” says Troughton. “As the series goes on, we look at nature and nurture – does your environment change you or do you change your environment? There’s a really beautiful balance going on.”

As a director, Troughton says her primary relationship is with the writer, looking at their vision for the series and working out how best to interpret it on set.

“I will always come back to David’s source material because he’s done the thinking,” she explains. “I spent a lot of time on this as a project, nearly a year-and-a-half in total. We did a lot of development before we even went to pre-production and we talked conceptually, we talked thematically, we talked about mythology. One of those ideas is of the changeling, of your baby being swapped, which is something that goes very far back. That was one of the themes we looked at.”

One sequence that particularly stands out in episode two is the birth scene – a moment that became more important once the book’s gaze was shifted from male to female.

“It’s about a group of women giving birth to potential alien babies, so you can’t not do the birthing,” Troughton says. “I found it fascinating because, at that point, David had written that all the babies simultaneously decide to be born, so it’s not natural, it’s not naturalistic. All the women give birth at the same time. Because I did the first two and Jennifer Perrott [Gentleman Jack] took over, I really wanted to end episode two on a hugely tantalising note, so we end episode two with the birth of the babies.”

One aspect of the series that is faithful to Wyndham’s novel is the idea that the children have no intention of leaving Midwich until they’re ready, which keeps the outside world at bay during the series.

“That’s for an entirely biologically protective reason. They’re vulnerable and they feel safe here,” Farr explains. “What then happens most ‘willingly’ is the parents isolate themselves, which of course is a great metaphor for parenthood in small towns anyway. You isolate yourself from your old friends, old communities, old networks and you become increasingly self-contained and small. So there’s this notion of a community that slightly cuts itself off, but it does so weirdly willingly. Then you’ll see towards the end that there’s this sudden, very violent shift when the children decide that, ‘No, that’s enough now’ and ‘We’re ready.’”

Produced by Route 24 and Snowed-In Productions and distributed by NBCUniversal Global Distribution, The Midwich Cuckoos was filmed in Amersham, on the outskirts of north-west London, where the production was able to replicate the sense of a satellite commuter town in Wyndham’s novel.

While previous screen incarnations of Midwich have become iconic in their visual style, most notably with the look of the children, Troughton says she’s not trying to prove anything in her filmmaking. Instead, she lets the cast and the script take her into particular shots with the support of DOP David Katznelson (It’s A Sin).

The director also spent a lot of time in post-production – “which is always so undervalued” – to realise the show’s specific soundscape, which features a cuckoo effect created by the crackling sound of the aurora borealis (Northern Lights) and is often used to signal that something otherworldly is coming.

“I like being horrified in daylight,” she says. “There’s a sumptuousness and a richness to that. And it’s followed with the score by Hannah Peel, which isn’t a horror score; it’s just full of great beauty and great thrill. I tried to do my shots like that really, with things that engaged me. But it’s quite an organic process. We let the cast do their brilliant performances and it’s then just about how to interpret that.”

Troughton also praises the “brilliant” cast of children who the join the show’s later episodes and were picked from thousands of auditionees by casting director Jill Trevellick.

“What we have is the next generation of actors. They’re fantastic,” she says. The director also champions the “resilient” crew who saw the production through the Covid-19 pandemic and rose to the challenges that presented themselves, though the production boom currently ongoing in the UK meant she was grateful just to keep hold of those working alongside her.

“What’s happening to our industry now is peculiar because, with the pandemic, we’ve now become the safest industry to work in,” she says. “We’ve also got to face up to the fact that television and film is recruiting people at university level because it’s a glut industry. One of the challenges was keeping our crew for a really long series because we [as an industry] don’t have enough crew. We are thriving and that’s a joy to see, but we need more crew to join our industry.”