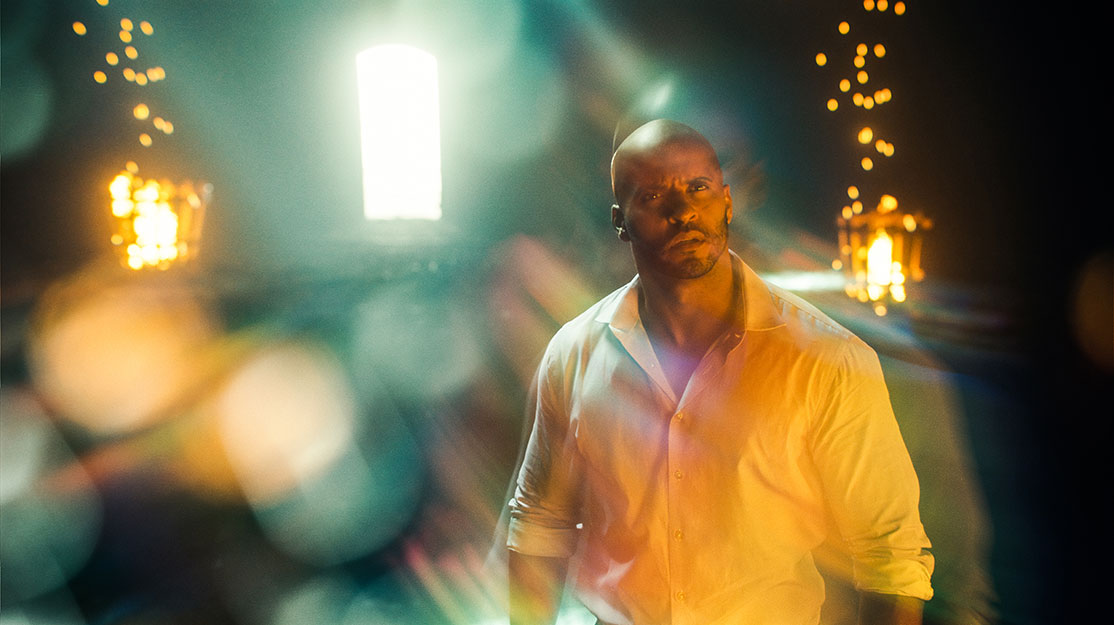 Ricky Whittle is enjoying his time leading the cast of fantasy drama American Gods. He talks to DQ about filming the series, working with Neil Gaiman and why he’s excited for the upcoming third season.

At a time when Amazon Prime Video is pushing for more Good Omens, another series based on a book by Neil Gaiman is gearing up for its third season. But while Omens, which Gaiman penned with the late Sir Terry Pratchett, can be boiled down to the story of an angel and demon who form an unlikely partnership to halt Armageddon, American Gods is harder to define.

“That’s why I like it,” says Ricky Whittle, who takes the lead in the Starz fantasy drama as Shadow Moon. “You know, it’s not one thing, it’s not the other. It’s a unique show and that’s why it’s out there, because it’s not sitting in the pack. There are still love stories, there are still struggles for power. We’re still telling recognisable stories, but in a very different way. So along with the huge budget we spend on the best ensemble on TV, it’s a unique show that has to stand out because it is so different and very hard to describe.”

Based on Gaiman’s 2001 novel of the same name, the show revolves around Shadow Moon, who is released early from prison following the death of his wife Laura (Emily Browning). On his return home, he meets the enigmatic Mr Wednesday (Ian McShane), who offers him a job as his bodyguard and assistant. Shadow then becomes exposed to a hidden world of magic and is embroiled in a war between the Old Gods, who fear they are becoming irrelevant, and the New Gods such as Technology and Media.

The series launched in 2017, with a third season due to enter production this autumn. Whittle, whose credits include British soap Hollyoaks, the US remake of British mystery drama Mistresses and sci-fi show The 100, says he has never worked on a show so meticulous, with as few as two scenes being shot on some days on set.

“This is just a monster and you’re very aware of that,” he says, speaking at the Monte Carlo TV Festival. “Actors want to work on the show because they are given time to breathe; they’re allowed to just stay in the moment, which is great for an actor. Directors are told, ‘Whatever toys you want, have them. If you need cranes, camera lenses, whatever you want, it’s all yours, just finish by this time.’ So everyone wants to work on the show.”

That American Gods is broadcast around the world on Amazon Prime also adds to the appeal of working on it, as do the source material and its creator. “It’s already a product that everyone knows people are fans of, and a lot of our crew beg to be on the show because they were that passionate about the book,” the actor continues. “So it’s very weird, but you’ve got a whole crew and cast who are excited by what they’re doing because they were already fans.”

Gaiman, an executive producer on the series, is readily available to the cast when they want to discuss their characters, though his time became particularly precious while he was also showrunning Good Omens, a passion project that he wanted to make in Pratchett’s memory.

“He didn’t feel like he needed to answer to the fans. He didn’t need to answer to the studio or the network. He was like, ‘I don’t care if you like it. This is my gift for Terry.’ And that’s a beautiful place to be,” Whittle says of the author. “But it also meant he wasn’t able to be with us as much [on season two]. But we love him to death. He’s an incredibly humble guy. He’s very trusting, because he says, ‘They’re not really my characters anymore. They’re your characters; you know your character more than I do. I know where your characters going to go, but now the vehicle is yours. And if you choose to go a certain way, I trust you to do it.’ You can only be grateful for that kind of leadership.”

Making American Gods hasn’t been without its ups and downs, however, with four showrunners in three years. Michael Green and Bryan Fuller developed the novel for television alongside producer Fremantle, but they left the project after season one. They were replaced by Jesse Alexander, who stepped down from the position just seven months later, leaving director Chris Byrne and line producer Lisa Kussner to bring season two to its conclusion. Charles ‘Chic’ Eglee has now come on board to steer the series through season three.

Whittle dismisses reports of “turmoil” surrounding the show, pointing out that changes to the creative team “happen in every show.” He continues: “It’s what normally happens when the creators want to spend this much money and the business people are going, ‘Yeah, but we can probably do it for this,’ and then you have to try to meet in the middle. When you get people who don’t want to budge, something has to move, and unfortunately that’s why we lost Bryan and Michael.

“But it doesn’t affect us, because we’re responsible for our own characters. We know our characters. And if Bryan and Michael went through all three seasons, season three was going to be very different anyway. It’s a very different part of the book and it’s a very different experience [for me] now because Chic’s bringing me behind the camera working with him and then listening to the writing team. You really feel that intelligence, that experience, that creativity. It’s phenomenal and it’s gotten me crazy excited for season three.”

Brought up a Catholic and raised by nuns for a period of his childhood in Manchester, Whittle says that these days he simply believes in good people and bad people, destiny and that what is meant to be will be. “So I don’t worry about projects and auditions that don’t go well. I’m like, I was meant for something else,” he says. “Everything happens for a reason and now we’re here living the good life.”

With the story of American Gods only now nearing the mid-section of Gaiman’s book, it seems Whittle can look forward to enjoying that good life a little longer.