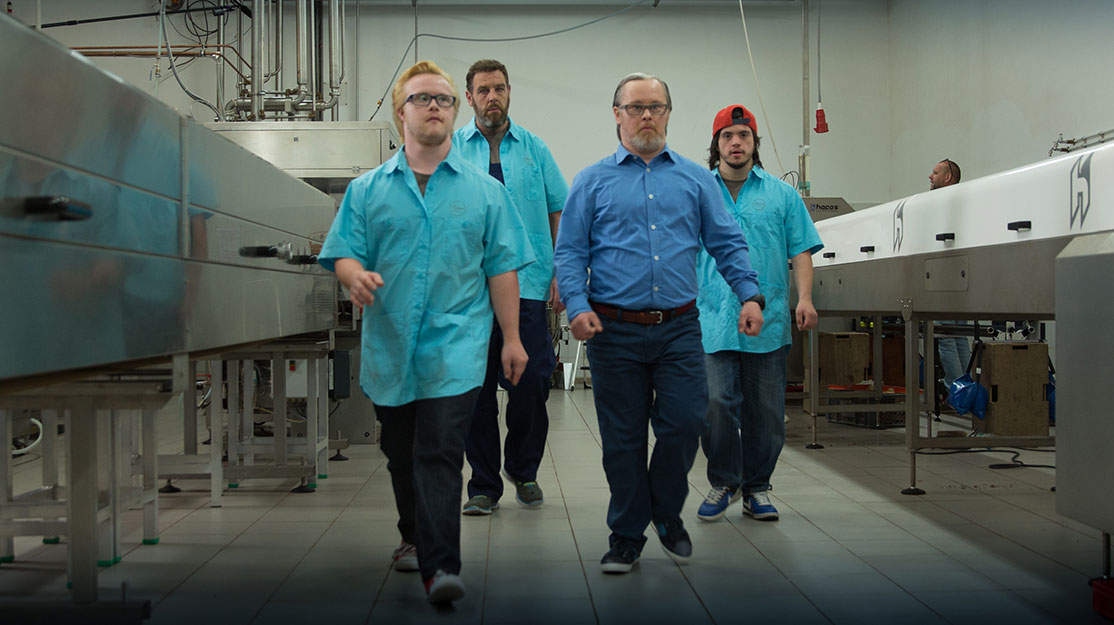 The best of Belgium

On the back of thrilling series such as De Dag (The Day), Tabula Rasa and 13 Geboden (13 Commandments), Belgium is proving to be the latest global creative hotspot for television drama. DQ hears from those in the business to find out the secret to its success.

A heist drama that plays out from the viewpoints of both the police outside a bank and the criminals inside. A psychological thriller about a young woman with amnesia who is the key to solving a mysterious missing persons case. A series inspired by the Ten Commandments in which a modern-day Moses commits gruesome crimes in an attempt to restore moral values in society.

There may not be many plot points that De Dag (The Day), Tabula Rasa and 13 Geboden (13 Commandments), respectively, have in common. But all three series stand out for keeping audiences hooked with innovative and unique methods of storytelling – and all hail from Belgium.

The small European country (population 11.35 million in 2017) has steadily built a reputation for groundbreaking, genre-busting drama that is now playing to international audiences thanks to a host of streaming services offering foreign-language around the world. Walter Iuzzolino – the curator of Channel 4-backed platform Walter Presents –has been a notable cheerleader for the nation’s scripted series.

Showrunner Malin-Sarah Gozin says creating unique stories by mixing genres has become her trademark, having taken this approach for both 2017’s Tabula Rasa and earlier series Clan, an award-winning, darkly funny family comedy that doubled as a mystery crime thriller. “I always like to blend genres, because fiction and drama has to be a reflection of reality – and real life is a true blend of genres,” Gozin says. “We all have those moments where you don’t know whether to laugh or cry, or are really happy and at the same time really scared. So if I see something like that in drama, it stirs something within and I make a connection. Something magical happens then.”

Mixing genres, she adds, is a way to talk about complex issues in a lighter or more off-beat way. Clan tells the story of four sisters who plot to murder their domineering brother-in-law, but it also manages to be very funny.

“It’s why we use metaphors or fables and fairy tales,” Gozin continues. “You want to talk about something complex in a very simple way. That way you can talk about dark and difficult themes but in a different way.”

Blending genres begins in the development and writing process, but it doesn’t stop there. “You have to continue with that exercise on set with the actors and directors, and also in the editing room afterwards,” Gozin says. “It’s really hard to pitch, sell and market these hybrid genres. When I pitch, I can sum up all the ingredients and explain my vision of how they will taste, but for commissioners it’s hard to get a real taste. They say the proof of the pudding is in the eating – it’s the same with blending genres. There is no real proven method; it’s chemistry.”

But what is it about Belgium that has seen it become one of the hottest drama producers? “It’s been in our genes,” Gozin says. “We’re that tiny country with three different language areas. We’ve got this non-conformist stubbornness. At the same time, we’re self-deprecating and we don’t take ourselves too seriously, which results in this quirky flavour. Belgian people have a desire to colour outside the box and a rich imagination.”

Gozin likens Clan (known internationally as The Outlaws) to Denmark’s Forbrydelsen (The Killing) in terms of the impact it has had on raising international viewers’ awareness of a smaller nation’s drama output. The Killing, of course, kick-started the Nordic noir boom that continues to shine a spotlight on Scandinavian series. “Then The Bridge followed, and Borgen, and everybody knew about Scandinavian drama. It even got a tag – Nordic noir,” she says. “It took a dead prick [in Clan] for Belgian shows [to be seen internationally], and other shows followed like Professor T and Hotel Beau Séjour. Now we’ve got a tag of our own – Belgian noir.”

Professor T, about an eccentric academic who works as a police advisor, is now in its third season on VRT-owned network Één, with remakes in France and Germany. It, too, contains a jumble of tones, from musical comedy to tragedy and melodrama, making the crimes the eponymous character solves almost an accessory to the style of the series.

“I didn’t have the advantage of lovely scripts. I got very straightforward scripts,” Professor T director Indra Siera explains. “There wasn’t a lot of money – there never is in Belgium – but it appeals to me because working with no money makes you more creative. It’s all about what there is, not what there isn’t. I started filling in the gaps and wanted to make this touching, interesting, poetic, and that was it.

“I was extremely free because there wasn’t that pressure of the money or budget. There wasn’t any pressure at all from the channel, and that gave me wings. There was an amazing cast who did what I asked them to do.”

Siera describes Belgian drama as “the love child of the digital era, where filming is becoming cheaper, and the theatre of poverty – the way you can make something from nothing. You are very creative and very out of the box. Mixing these two things makes Belgian drama.”

Ricus Jansegers, TV programming director of commercial broadcaster Medialaan, says what he likes about the Belgian industry is that writers and producers can still pitch a “crazy” idea and get money for it. “I’ve made some mistakes in the past where I did not say, ‘Let’s go for it,’ but I’m more convinced nowadays that you have to give the power back to the creative people,” he explains. “It’s the environment where things start. I would not say the power is with the channel; it’s important, because you need a broadcaster, but it’s not with them. The most creative things come from giving power back to the creators.”

Jansegers cites 13 Geboden as an example of a “typically Belgian” Medialaan show that has earned international acclaim, something the exec admits he did not expect.

“What I like about this show is we’re the number-one commercial TV station and this was in full primetime,” he says of the dark and chilling thriller. “Normally, this would go on a smaller channel or on a pay TV service. That has evolved through the years.”

Medialaan is now willing to take more risks, Jansegers says, with viewers subsequently coming to expect brave programming choices from the broadcaster. “With success, we dare to do it more and more. Is it helping us? I believe it is,” he says. But such success brings greater interest from third parties looking to get involved in the creative and production process, which in turn risks the quality of the original concept. “That’s nice and fun, and we have to look into it, but on the other hand, we should stick to what we’re good at,” Jansegers notes.

As well as Professor T, VRT has been the home of dramas including Tabula Rasa and Tytgat Chocolat (Team Chocolate, pictured top), a heart-warming romantic comedy about a man’s journey across Europe to be reunited with the love of his life. Notably, producer De Mensen partnered with Theater Stap, a theatre company for people with learning difficulties, with its members playing all the lead roles. The series is now being developed for a UK remake through Reel One Entertainment and London theatre outfit Chickenshed.

However, unlike Medialaan, VRT looks for international potential in its series very early on in their development. “If we have a good concept, it has to be a local drama, a local story. We don’t want international stories. But if we think it has international potential, universal themes or emotions that attract a universal audience, together with the prodco we look at how can we raise the production values to a level where it can travel,” explains international drama executive Elly Vervloet.

VRT first broke out internationally with Salamander, a crime drama about a detective who investigates the theft of 66 safety deposit boxes belonging to prominent Belgian citizens. It first aired in 2012, with UK network BBC4 among those that picked it up.

“It’s important when you make drama, as it’s such an expensive genre, to think long term because budgets are shrinking,” Vervloet continues. “We have to see if it’s possible to create a return on our investment, and then we can reinvest the money in new drama series. That’s how we try to make it sustainable for the next 10 or 20 years.

“The high-end drama we make is more expensive but it’s certainly not comparable to other international budgets. We try to see what we need to make a splendid drama series. It’s the only way to create a return on our investment and reinvest it in other drama series.”

Vervloet agrees Belgium should “stick to what we are good at,” rather than specifically trying to target international audiences at the cost of a series failing to gain traction at home. She points to series like supernatural crime drama Hotel Beau Séjour, which travelled around the world but is set in Dutch-speaking province Limburg and uses the area’s unique dialect. “We shouldn’t fall into the trap of making the huge, international drama series everyone is making. We should stick to who we are, with surreal stories and the out-of-the-box genres we explore.”

To do that, the industry must show faith in creative talent and help bring through the next generation of writers, Vervloet argues, adding that VRT will put more time and money into script development in 2019. Hotel Beau Séjour, which aired on Arte in France and Germany and worldwide on Netflix, is also in development for a second season.

“If you have a good writer and can attach a younger writer to them, maybe the young talent can learn from the experience and bring another point of view to the script,” Vervloet continues. “Malin-Sarah Gozin is so successful and creative – we really need more young female writers and showrunners. We have a lot of 40-plus male writers. Young female talent have another way of storytelling, another voice, another point of view.”

That Belgium is a creative hotspot isn’t news to Marike Muselaers, co-CEO of producer, financer and distributor Lumière, who says the country has always been that way. The danger now, she notes, is that increasing international recognition of its drama output will lead to it receiving a label that could constrict the risk-taking and creativity that got it noticed in the first place. Scandinavian drama becoming synonymous with – and perhaps limited by – Nordic noir is the most obvious comparison.

“They have to be careful because when a lot of money is flowing in, [creative] risks might not be taken,” Muselaers says. “We should not lose our connection to the audience. That’s the main risk of all these platforms, bringing in a lot of money but not really connecting us to the audience any more. Producers and creators need to keep that audience in mind. And as long as Belgians keep their own viewers in mind and don’t try to make generic, international stuff, they will be fine.”

Whatever’s happening in Belgium, it’s clear this small nation is among the most creative countries in the world when it comes to making drama. “It’s like Belgian chocolates,” Gozin concludes. “They’re all different inside the box but what makes them Belgian chocolates is the filling can be really unconventional. But it’s all quality.”