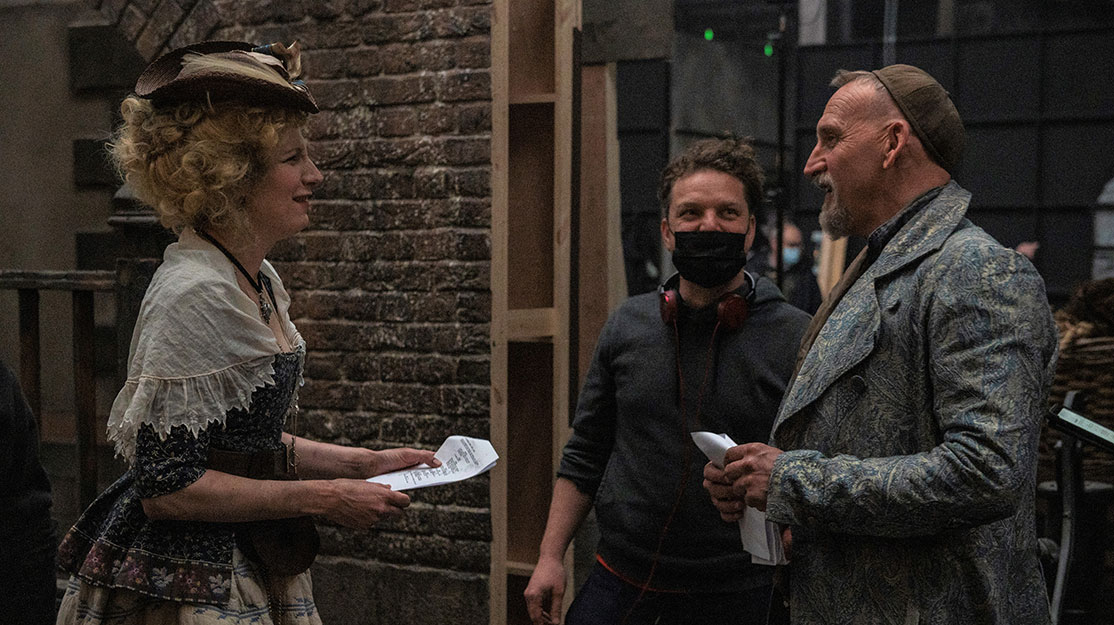 The art of Dodger

In Charles Dickens’ iconic novel Oliver Twist, Jack Dawkins is the cunning, charismatic and skilful pickpocket who leads Fagin’s gang of child criminal on the streets of Victorian London. Known as the Artful Dodger, he stands out as one of Dickens’ most beloved and recognisable characters, and was most famously portrayed on screen by Jack Wild in the 1968 musical Oliver.

In 10-part family drama Dodger, Jack now takes centre stage in a prequel set before the events of Dickens’ story. After growing up in an orphanage and with no memory of his mother or father, he was sold to a cruel mill owner where he worked long hours, was beaten and often left hungry. As the series begins, the now 12-year-old Jack escapes and makes his way to London where he is welcomed into Fagin’s gang of young pickpockets.

Jack and his new friends duck and dive their way through life as they attempt to stay one step ahead of the police with his latest scheme, whether it’s acting in a haunted theatre, posing as a long-lost boy, printing their own dodgy money, a daring rescue from a hellish carnival and even breaking into Buckingham Palace.

Dodger is based on an idea Thomas first had when he was entering his teens, having just appeared in an Oliver play and wondering what a story about the Artful Dodger might look like. He later developed the idea as a novel, but became disillusioned when he discovered famed writer Terry Pratchett was similarly working on a novel called Dodger, based on Dickens’ character.

Then when he met Universal International Studios exec Mark Freeland to talk about making a family show, he pitched his idea for Dodger. Freeland is now an executive producer on the series, which debuted on CBBC and the BBC iPlayer in February and was recently promoted to BBC One, debuting in a flagship Sunday teatime slot last weekend.

“By that time [I pitched the series], we’d had children and I thought it would be nice to make something they could watch,” Thomas tells DQ. “Then I said to Mark there’s this idea I had called Dodger. I had an outline already and that was it really. That was 2018, so it’s taken quite a long time to get it together.”

Inevitably, the Covid-19 pandemic delayed the process. But with some of the scripts coming in overlong, the studio and the BBC suggested expanding the series from its original order of six half-hour episodes. Montgomery then also came on to write some episodes of Dodger, which is distributed by NBCUniversal Global Distribution.

“We wrote so well together. I wrote one, Lucy wrote one,” Thomas says. Montgomery continues: “Then we were passing the baton. We’d write a first draft of a scene in the room together, then if one of us had to do something with the kids, the other one would take over and then the other one would come back and rejig it. We were constantly reworking it. Even now, when we’re driving somewhere in the car, we’re talking about Dodger. In the very first lockdown, our youngest needed one of us to be her teacher so we would take turns, and the other one would be in the office writing and then we’d talk about it in the afternoon. That back-and-forth relay has never really stopped.”

That they are not only writing partners but also a married couple meant they found they could be very honest with each other in their feedback without causing offence. “I tend to get more offended, but I’m getting better at that,” Montgomery jokes. “We’ve also written with other people where the other person hasn’t quite pulled their weight. I feel like we both work hard and one of us isn’t a shirker just trying to get their 50%.”

Both also come from a comedy background, and their similar sense of humour helped them with writing the scripts. And they found that once they had done the hard work of writing extremely detailed outlines for all 10 episodes, filling in the dialogue was much easier.

“Essentially, in terms of creativity, the very detailed outlines are the most important thing,” Thomas says. “When we started pre-production or doing rehearsals, because I was having to look at locations and do all the directing, what’s brilliant is Lucy would then write any changes and add more jokes and more things to it.”

Montgomery praises the cast – young and old – for their ability to learn rewritten lines on the spot as dialogue might be scrapped, amended or even given to another character. There was also an intensive rewrite following the first auditions, when the writers were introduced to the cast.

“If you haven’t written for children before, sometimes you can write a line that’s way too adult for them,” she says. “If you hear Mila Lieu, who plays Tang, sometimes it works and she sounds precocious and funny. Other times, she sounds like a middle-aged person. There was a lot of tuning our ears into each of them.”

Thomas says one of their golden rules is to be prepared to throw out lines they might have spent ages writing if they don’t work on set. “If it doesn’t fit or work, you just cut it out, and that’s how we work on the programme,” he adds. “If a costume wasn’t quite right, you’d say, ‘Sorry, that’s not working. Can we get another one?’ You have to be able to throw things out and do new things. The problem sometimes is people stick to the thing they’ve done and it’s limiting. We didn’t do that on this.”

A key aspect to their flexibility on the show has been the numerous job titles they have both carried, which has allowed them to keep their hands on the project at all times. “A writer should always be on set. Then you can keep up the quality control because you care so deeply. You were at the birth so you want to see the baby grow up,” Montgomery says.

“If you’re writing it, directing it, you’re in it and you’re an executive producer, that might sound like a lot but it saves you lots of time because you can make a snap decision straightaway,” Thomas notes. “What’s so good about this is you do save time, and that’s part of the fun.”

It was the fun, as well as the high drama and “gut-wrenching moments” of Dickens’ novel, that Thomas and Montgomery were particularly keen to bring to Dodger, with certain characters – Dodger himself, Nancy, Fagin and Bill Sikes among them – also leaping from page to screen.

Thomas was also inspired by classic sitcom Only Fools & Horses to create a working-class comedy, where Dodger is wheeler dealer Del Boy (played by David Jason) and Tom is Rodney (Del’s brother, played in the show by Nicholas Lyndhurst). In terms of style, he also wanted it to be more The Muppets’ Christmas Carol than any other Dickens’ adaptation.

“We compare it with The Goonies and other Steven Spielberg films,” says Montgomery. “That’s the aim, to make it that big and ambitious. Although we don’t have a Spielberg budget, we want it to have an edge-of-your-seat pace.”

But whether the characters originated with Dickens or not, the writers wanted to take the series in a new direction for its intended family audience. One example is Charley Bates, a boy in the novel and a girl in the series, played by Aabay Ali.

“The book is about a load of boys and we wanted to have a nice mix of boys and girls,” says Thomas, who bats away online criticism of the show’s diverse casting. “What’s so funny is there’s this thing about our BBC being for everyone and this programme genuinely is for everybody. Writing it, you wanted to do something whereby anyone could watch it and not turn off or be offended or upset or scared.”

“We took the adults from the book but reimagined them,” says Montgomery. “Then with the gang, you’ve got this massive opportunity to have fresh new talent you can launch to the world. We’ve got unbelievable child actors in this. It was great to go, ‘Who can come into the gang that Dickens’ didn’t imagine?’ That was great fun. Ellie-May Sheridan, who plays Polly Crackitt, had never acted before and it was only her second audition over Zoom. Connor Curren, who plays Tom Chitling, Dodger’s nemesis in the group, he’s never done any screen acting. They’ve all immediately gone on to do unbelievably great things so we feel really lucky. You feel like a proud parent.”

With family co-viewing back in vogue after two years of pandemic-enforced lockdowns, it has proven to be a perfect recipe to bring people together on their sofa. “A lot of people who have responded to Dodger said, ‘We watch it with our children,’ and it’s nice,” Thomas says.

“We wanted it to be like watching a Pixar film where the adults would get the jokes in a different way and it will be entertaining for them as well,” Montgomery says. “As parents, we’ve all sat through things that are incredibly boring that our children want to watch. But the kids also find it thrilling. We know how far to push it – you don’t want them to have nightmares, but you want them to be frightened at points. You want them to also be reassured that the children will get through it and they’re plucky and cleverer than the adults.”

While they await news of a potential second season, could Dodger eventually marry up with Dickens’ original story and introduce Oliver Twist further down the line?

“Fuck him, he’s boring,” laughs Montgomery. “I object to the fact he’s supposedly highborn so he’s good and pure and all the other shits who aren’t highborn are all the thieves. That really annoys me. I understand it’s Victorian moralising but we’re staying well away from it.”