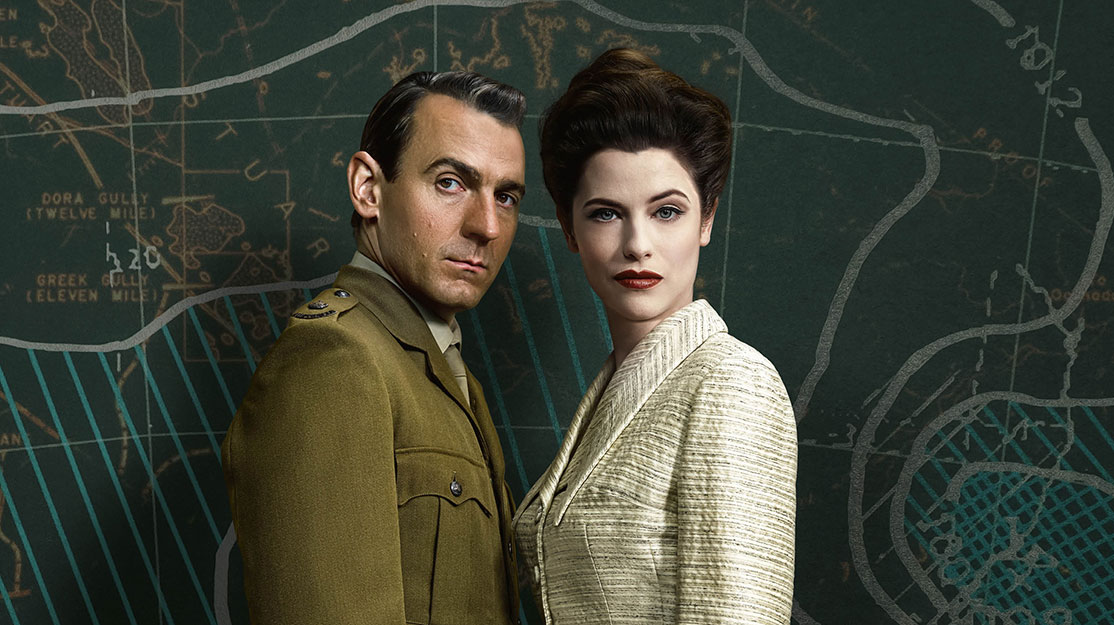 In Australia in 1956, at the height of the Cold War, British atomic bomb testing took place at Maralinga, a remote region of the outback in South Australia. Seven tests were carried out in total, the first four under the name Operation Buffalo, which now lends itself to the title of a six-part drama that mixes real events with fictional characters.

The series, which debuted in Australia on ABC last night and is distributed by APC, introduces Major Leo Carmichael, an Australian army engineer and Second World War hero charged with keeping the nuclear base running smoothly. But testing the world’s most dangerous weapon is not an easy task with a commanding officer who is not fit for the job; a meteorologist, Dr Eva Lloyd-George, who is starting to ask questions; and a government and press watching their every move. And it soon emerges that the land of Maralinga may not be as uninhabited as it seems.

Operation Buffalo opens with the header, ‘This is a work of historical fiction but a lot of the really bad history actually happened,’ which serves as a nod to co-creator, writer and director Peter Duncan’s approach to developing the series along two tracks: don’t get the historical facts wrong, and keep it entertaining.

Certainly, the characters appear to be more than hapless at times and don’t immediately instil the sort of confidence you would expect from those in charge of testing deadly weapons.

“You could tell this story in a different way. You could tell it in a way that was pretty bleak and depressing,” the Rake creator tells DQ on the phone from his home in Sydney. “There was a sense, at every level, of betrayal of the Australian government by the British government – and by the Australian government of its soldiers and the First People [Aboriginal Australians who lived on land at Maralinga]. But that approach has never been in my nature; it’s not my thing.

“I had done some satire in the past in my movies and it occurred to me this was an act of madness, allowing the UK to bomb Australia, and the way the Australians administered it was pretty appalling. I turned to a film like [Stanley Kubrick’s 1964 black comedy] Dr Strangelove and thought, ‘That’s how you tell this story.’ You add personal madness into it, albeit through fictional characters, and create the circumstance for a hero [Leo Carmichael] you just throw problems at in every episode.”

Comparisons can also be made to Catch-22, Joseph Heller’s iconic, sprawling and absurd war novel that was recently adapted as a TV drama.

“That was and remains one of my favourite books. What Heller captured in his book was that madness, that this is crazy,” Duncan says. “It was front of mind. But it was still more Strangelove for me because of the look of it, though it’s not in black and white. There’s something about being out there in the desert that feeds madness.”

Duncan was approached with the idea for the series by Porchlight Films, the prodco led by Vincent Sheehan and Tanya Phegan, who created the series with Duncan. Immediately drawn to the real-life foundations of the story, Duncan wrote a pitch for the ABC, setting out his vision for a show full of laughs and one that wouldn’t be relentlessly sad.

“The ABC probably has 12 million scripts about Maralinga lurking in its filing cabinets, but they liked the fact this would be engaging television and would encourage viewers to keep watching,” he says. “In the end, they commissioned it.”

The story also chimed with Duncan’s personal history. He describes growing up in a political household with his communist grandfather and capitalist mother, who fed him alternative historical perspectives. His mother also passed on her love of spy novels, leading Duncan to develop an interest in the Cold War and espionage.

“As I grew up, I also became much more interested in history and politics generally. And at university, I became much more aware of the real history of Australia, as opposed to the history we were taught at school and the terrible afflictions that had been made to First Australians,” he recalls.

“Operation Buffalo was a perfect marriage for me in terms of this bizarre incident of nuclear bombs being dropped and how it was lied about. It was also obviously something that made me very angry. I was aware of Maralinga but I wasn’t aware of the details – and the more details I learned, the more shocking it became.”

Describing satire as his default position, Duncan drew on influences such as Monty Python, Peter Cook and Dudley Moore to keep the story entertaining, without ever losing sight of the responsibility he was shouldering to ensure the show honoured the facts. The blend of those two angles created a “tricky writing process,” involving weekly story and character conferences with Sheehan and Phegan. Duncan also agreed to direct the whole series, which meant production could be planned akin to a long film.

“It’s always the case – some [writing] days were diamonds and some days were turds, but the story just got better and better,” he says. “Thankfully, the cast really embraced the scripts. There wasn’t a huge amount of debate in terms of what needed to be done. And so, directorially, I could sit down with them for as long as possible and make sure we were working on the same project. Given the quality of these actors, once I had that locked in my head, I felt pretty certain that they’d get the job done. And indeed they did.”

Filming took place in several stages, beginning on location in Sydney, which doubled for parts of Adelaide. The show’s military camp was then built at a Sydney reservoir that was also the filming site of Mel Gibson war film Hacksaw Ridge, before the final two-and-a-half weeks were spent deep in the South Australian outback.

“It was glorious. It was so inspiring. There wasn’t a bad angle,” Duncan says. “But it was tough. It was very physical. I have this thing called ‘film memory,’ so when we look back on a shoot I’m saying, ‘Wow, wasn’t that great.’ If you actually dial back into the moments, all I can remember is stress. Film memory makes it more loving and comforting than it really was.

“It was just a sense of physicality. The other thing about it was I felt a great responsibility, because of the beauty of the land, the history of the land and its attachment to the local Maralinga people, to capture it creatively and ethically in a way that made everyone proud. I was constantly aware of that. It wasn’t a burden, but it was something I was carrying and I think we did the best we could.”

It’s that dedication to the historical context of the series that Duncan was most determined to maintain throughout, the writer noting a lack of public awareness of what happened at Maralinga in the 1950s and his eagerness to shine a light on those events.

“When Vincent and I were in London two years ago, we were talking to producers and agents, and no one knew about this. Then you tell them the story and they say, ‘You’re fucking kidding me?’ The sad thing is, you come back to Australia and not many more people are aware of it,” he says. “It’s a scandal, and it’s good to expose scandal.

“I also think it’s good, particularly at the moment, to question the notion of trust between nations and governments. We went to Afghanistan, a country that my country does not understand in any way, shape or form. We went to their country and we killed thousands of people, and I don’t think the Australian nation understood why we were there. I mourn the lack of debate and the lack of politicians caring to inform the people about the truth of situations.

“This was a situation in which Australian people were lied to,” Duncan adds. “To that extent, I don’t think it’s a unique situation. I hope people are aware of what’s going on in the world. Any reminder to be vigilant and to be careful what you wish for is a good thing.”