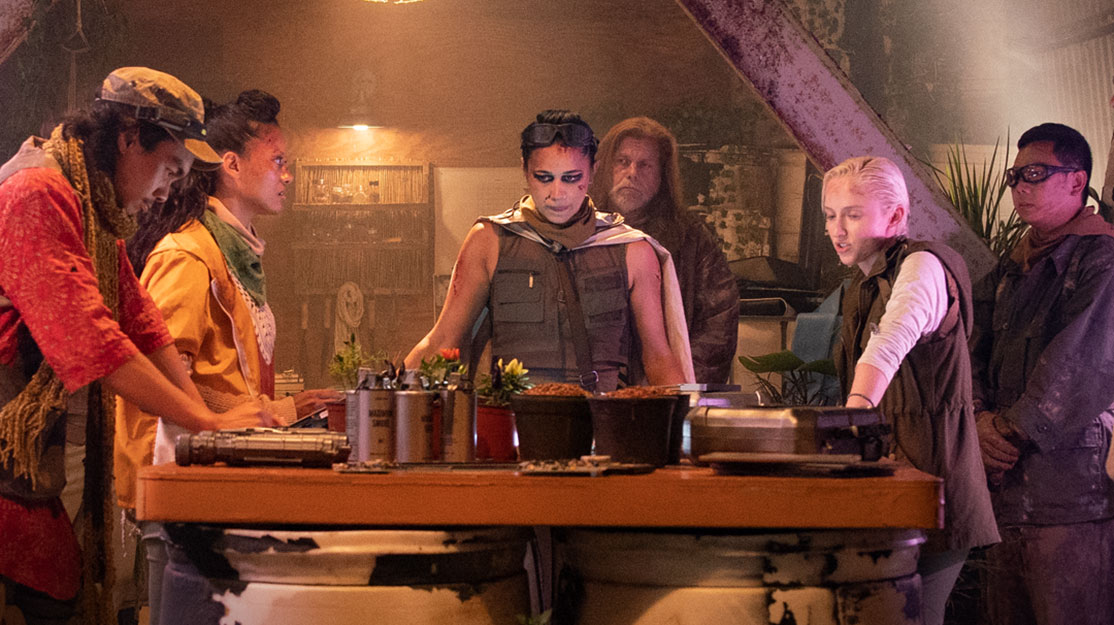 The makers of Snap Original series Breakwater reveal how they got to grips with vertical filmmaking to produce this ambitious shortform series and discuss the importance of entertainment with a message.

In a television world where every programme is fighting for viewers’ attention against a plethora of distractions, spare a thought for the makers of Breakwater, a 10-part shortform drama produced for social media platform Snapchat.

In an effort to keep viewers switched on – and avoid them swiping away to the next video – Snapchat parent company Snap provided producer Retrofit Films with some very specific advice on how to make the series as appealing as possible.

“They have details like you can’t be on the back of someone’s head for too long otherwise they’ll swipe out, and even fading to black had to be extremely short,” producer Chris Hanada tells DQ at the Monte Carlo TV Festival. “There were a lot of things like that. Basically, there’s no time for character development; you’ve got to hit the ground running and then just blast through it.”

Described as a futuristic young-adult drama set in a world of climate refugees, Breakwater takes place in the dangerous coastal slums outside the LA seawall, where people dream of winning the visa lottery and a ticket to the safe zone. It centres on savvy 20-year-old fixer Mai, who grew up in Breakwater, as he faces a race for survival against an impending hurricane.

Clocking in at a total of 76 minutes, the project started life as a concept for a ‘traditional’ TV show before being redeveloped for Snap. It debuted in February this year, with new episodes being released every 48 hours.

“It feels like a high-paced action show,” says Tanner Kling, who cofounded Retrofit with Hanada. “It’s like what you see on television; you just have to move that story along so quickly. What’s so different about producing for a viewer on Snapchat compared with a viewer on Netflix is [Snapchat users] can move on if they’re bored, they can swipe and move on to something else.

“We were always just living in constant fear of that tap and swipe, and if there was a moment that moved too slow, they’d be able to test it and say, ‘This scene is too slow. This moment on her face where she’s thinking about something moving or important to her is taking too long and we’ll lose our audience.’ In TV, you could hang there a little bit longer, but not for Snap.”

Though the production process was largely similar to making a high-concept TV series, there was one major difference that affected almost every part of filming: Snapchat’s vertical format, which meant cameras had to be turned sideways, while every set had be considered in an entirely new way.

“There were more tilts, fewer pans, no tracking shots, and whenever you blocked [a scene], you had to stack people up, so you always tried to find stairs or something where you could stack everyone,” says Kling. “During physical production, that was the big thing, how to stack people. How do we fill the frame? We had ceilings and floors, which you usually never see, and where do you put the boom mic [which is normally held above the actors’ heads]?”

As a result, production designer Megan Bell played a vital role in mapping out how the 360-degree sets would look and be built. Making a series for Snap also afforded the production team the chance to add some extra features by utilising Snapchat’s Lens function. Cameras captured 3D augmented reality (AR) scans of the sets that users were then able to explore on their mobile phones.

Meanwhile, the show’s story meant the filmmakers also had to contend with another production headache – water. “Water’s a whole other beast but Meg came in and just knocked it out of the park,” Kling says. “We shot the whole thing in Mexico on the Titanic stages at Baja Studios. We were looking at South Africa, we were looking at Eastern Europe, because we needed water tanks. Mexico was the best place we could have been and Meg did a great job with her team and made it work.”

“It was a wild ride,” says Bell (Monster Party), who previously worked with Hanada and Kling on another show called Golden Revenge. “I remember reading the script and thinking, ‘Wow, there’s a very fast pace, there’s a lot of action.’ And I remember asking, ‘So are we really going to hit someone with a tidal wave?’ They were like, ‘Oh yeah, we’re doing everything practically.’ There were so many mandates with Snap, like the first three seconds had to have a real punch. We had many, many conversations about what that would be like.”

With the vertical perspective in mind, Bell had to build the Breakwater sets in an entirely different way. “Parts [of a set] where we can usually get away with cheating, we couldn’t at all,” she says. The fact that the show is set among a group of refugees in the future also led her to use plastic – a material that would be readily available – as an integral material in the show. One bridge was built entirely out of water bottles, while street lamps were larger water bottles with iridescent lighting inside.

Only two real locations were used in the series – an abandoned dam and a similarly abandoned hotel – but they both also needed extensive builds to support the show’s vertical perspective. Then there were the numerous special effects, from explosions and air cannons to fire and a huge tidal wave set piece that flooded the set – and any props that weren’t nailed down.

“We knew props were going to be a big thing because there was going to be so much focus on the actors and the props were going to be really present on the screen,” Bell says. “We had a big hurdle with getting prop guns and any kind of weapons into Mexico, even though they were totally fake and rented from a prop house. They couldn’t cross the border, so many of the weapons you see in the show are actually modified Nerf guns. We had a couple of different variations and then we modified them by adding some sculptural elements to cover up some of the stuff that made it look like a Nerf gun. Then with painting and adding a few little bits and bobs and lights, it made it look more futuristic. But it was a Nerf gun.”

Breakwater was prepped and shot over seven weeks, with more than a dozen night shoots. Its primary cast of just six actors is led by Te Ao o Hinepehinga (Mai) and Jan Luis Castellanos, who plays Jax, a member of a wealthy family whose views on life change when he finds himself on the wrong side of the wall.

Castellanos (13 Reasons Why) was in the middle of shooting Netflix movie Tall Girl 2 when he was asked to take a call about joining Breakwater. He read the script and was sold on the chance to feature in an action-packed show.

“It’s very rare for a young actor to have that much action and I was attracted to the challenge of being in the water,” he says. “I would be waking up at 5pm to shoot from 7pm to 7am, and as soon as I woke up, I would jump into the ocean because you have to acclimate your body to that temperature. It was cold water, so it was shocking every time, but I loved it. It was a good ride.”

As an actor who enjoys technical challenges, one of Castellanos’ favourite scenes to film comes near the end of the series, when he was tasked with diving into the water to save another character.

“When you’re swimming in the water, you know there’s a camera there and you have to cut this chain and then save her and grab her and swim. That’s really exciting,” he says. “All those components… the more challenging the scene is, the better it is for me.”

Retrofit is now shopping a longform version of Breakwater, with the Snap Original series serving as a proof of concept. But as shortform series gather momentum on traditional television, both Hanada and Kling believe there is still demand for mobile scripted content among 13- to 21-year-olds, despite the demise of short-lived streamer Quibi.

“[Mobile content] is not going away for that demo,” Kling says, “whether it’s going to be scripted content, watching other stuff or using filters, it’s occupying a shit ton of their time and I know it will affect traditional TV in terms of how long someone’s going to sit there. They’re watching TV and they’re doing this at the same time. That’s only going to grow, so can you get them to work in tandem?

“When AI and AR come into the fold, where people are going to start putting on helmets to get their content and the gamification of it all, I don’t know if I want to be producing in that world. But it’s not going away. My daughter is native, that’s the thing – it will be more normal to her than sitting down and watching something.”

But having washed up on the other side of Breakwater, would they do it all again? Kling says the scope of the series was too big for the 10-minute format, forcing the creative team to shrink the story “considerably.”

“You also have to build so much and then you realise, ‘Oh, it’s only going to be on the screen for literally a second.’ It’s insane. Comedy travels well, but doing a drama, that’s a high bar and it makes sense that they [Snap] might be going more towards unscripted, gameshows and quizshows.”

“One of the reasons we did a climate-change story about migrants who are in a refugee camp is that is something that’s being talked about already on Snapchat, which is a generational change because our generation was not nearly as aware of social issues,” Hanada adds.

“The benefit of social media is that it’s connecting people and making them aware of a lot of these issues. If you were to produce for Snap, I would say think about some of the social issues that are important to you and figure out how to connect with the audience on those. Ultimately, that is the future of storytelling in both scripted and unscripted – entertainment that has a bit of a message.”