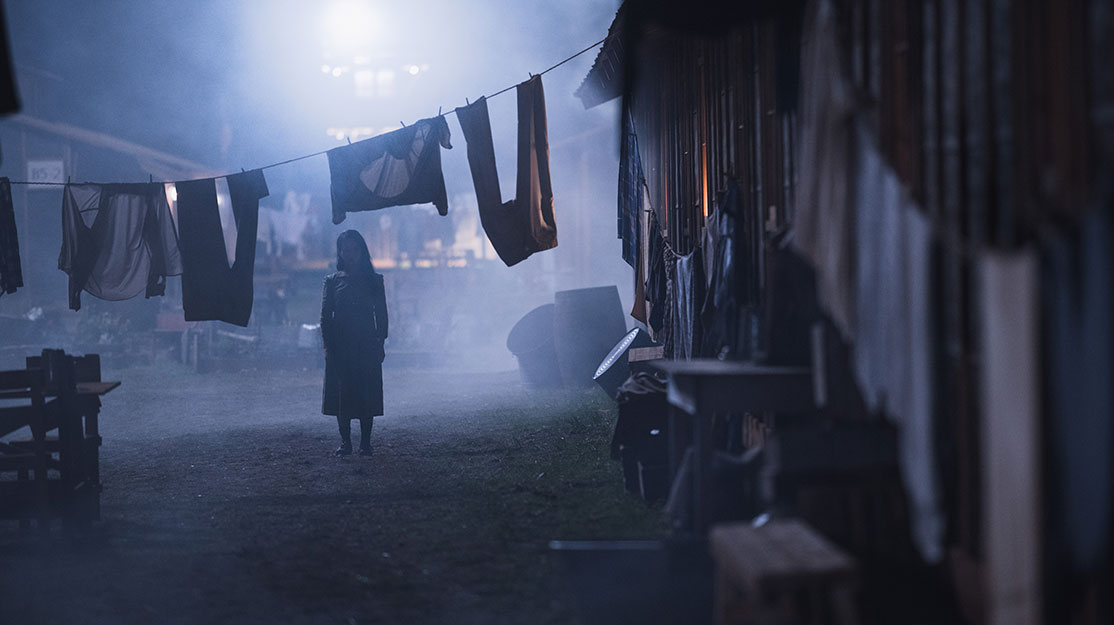 The second season of US drama The Terror lands in 1940s America, where a Japanese-American community is confronted by horrors both human and supernatural. Showrunner Alexander Woo tells DQ about the real-life experiences that influenced the programme.

Through stunning set design and special effects, standout writing and stellar performances, the first season of anthology series The Terror transported viewers to 1846, telling the story of an Arctic expedition led by two British naval ships and their crews’ fight for survival against inhospitable conditions, their fellow sailors and a mysterious predator.

That the horror story was rooted in reality, based on the true story of a voyage led by HMS Terror and HMS Erebus to find the Northwest Passage, might be one of the few elements that link it to season two, which tells a brand new story set within the Japanese-American community during the Second World War.

“If you’re a fan of season one and loved all the wonderful writing, performances and the gorgeous storytelling, you’ll be blessed,” showrunner Alexander Woo tells DQ. “But we have a completely different cast, crew and team of writers.

“However, our season shares a good deal of DNA with season one, certainly in the theme of the anthology, which is telling a historical story using a [horror] genre vocabulary. Both stories are about a group of people who are aliens in an unfriendly land, in a place where they are not welcome and what becomes of them and how much the horror is as much a human horror as a supernatural one.”

Season two, subtitled Infamy, centres on a series of bizarre deaths that haunt a Japanese-American community living in California and one man’s journey to understand and combat the malevolent entity responsible.

Most striking is the parallel story that depicts the internment of Japanese Americans following the 1941 attack by Japanese forces on the US naval base at Pearl Harbor, which led to hundreds of thousands of people – both immigrants and US citizens – sent away to camps, which are recreated for the screen in meticulous detail and astonishing scale.

“The story of the internment is one of the most painful and under-told parts of our American history, so if we were going to tell a story of Americanness and what it means to be an American then the story of 125,000 Japanese Americans, two thirds of whom were citizens and born in this country, being suddenly incarcerated by their own government would seem to be as poignant and relevant a story as you could find,” Woo explains. “Beyond that, the strategy of the show from the beginning was to use the genre vocabulary, the vocabulary of Japanese kaidan (ghost stories) and Japanese horror movies like The Ring, The Grudge and Dark Water as an analogy for the terror of the historical experience.”

With the current state of US politics and the White House’s hardline approach to immigration as a backdrop, Woo admits there are obvious similarities between the experiences depicted in The Terror and life today. “We never make any reference to it because obviously no one in 1941/42 would know what the world would be like in 2019,” he continues. “So we concentrated on telling that story, but the echoes to the present day are there for anyone who wishes to hear them.”

An AMC Studios production in partnership with Scott Free, Emjag Productions and Entertainment 360D, the new season entered development 18 months ago when co-creator and fellow executive producer Max Borenstein (Godzilla, Kong: Skull Island) first pitched the idea US cable network AMC, which was looking for a follow-up story to season one. But when Borenstein’s schedule didn’t allow him to write the pilot or run the show, Woo, who was developing his own shows separately with AMC, was asked to look at Borenstein’s “fantastic” series treatment.

“I will confess to a little bit of hesitation at first because I’m not Japanese American. I’m Chinese American. However, after spending time with it and doing a rather deep dive into the history, I realised that although this was the story of Japanese Americans, it was not necessarily only a story for Japanese Americans,” says Woo, a playwright whose theatre work has often touched on themes of what it is to be American.

“It’s a story for anyone whose life has been shaped or touched by the immigrant experience and that, in the US at least, is just about everyone. You don’t have to go back very far in anyone’s family to find someone who has made sacrifices to come to this country and make a better life for themselves.”

At the centre of the story is Chester Nakayama, played by Derek Mio (Greek), who considers himself entirely American and rejects the cultures and beliefs of his parents, who emigrated to the US from Japan. He feels he fully belongs in the US, until the day his country tells him he doesn’t.

“He has to come to terms with this very quickly,” Woo says. “On the one side, in the literal, historical sense, he, along with all the other Japanese Americans in the country, are imprisoned. They are labelled as ‘enemy aliens,’ even though in Chester’s case and in the case of most of the people who were interned, they were citizens of the country and had shown no sign of being an enemy of the people in any sense.

“Then, on the supernatural arc, he has to come to grips with the realisation that these spirits, these unquantifiable entities that his parents keep talking about, may very well be real, and he is not going to be able to keep those he loves safe unless he comes to grips with the notion of their existence. So that requires a paradigm shift in his thinking that those old-world ways may not be so backward.”

Casting has been key to the show. Alongside Mio are Kiki Sukezane (Lost in Space) as Yuko, a mysterious woman from Chester’s past; Miki Ishikawa (9-1-1) as Amy, a Nakayama family friend; Shingo Usami (Unbroken) as Henry Nakayama, Chester’s father; and Naoko Mori (Everest) as Asako Nakayama, Chester’s mother. Woo says it was crucial that The Terror had a core cast of Japanese-American actors and others of Japanese descent, which led to searches in Tokyo, LA, Hawaii, Australia, the UK and Vancouver, where the series was filmed.

“One of the things I’m proudest of is that 100% of our Japanese characters in our show are played by actors of full or partial Japanese ancestry, which is not an easy thing to do,” the showrunner says. “We had to search the entire planet. But I’m so proud of the cast we had.”

As he discovered, many of the cast were able to bring their own experiences and stories of the internment to the series and their performances. Mio is a fourth-generation Japanese American. He plays the son of a fisherman from Terminal Island, on the outskirts of LA, when in fact his own grandfather was a fisherman on Terminal Island who was sent to the Manzanar camp after Pearl Harbor.

Co-star George Takei, famous for his role as Sulu in Star Trek, was imprisoned in two camps as a child following the outbreak of war. He plays Yamato-san, a former fishing captain and community elder, and also worked as a historical consultant on the series.

Links to this period of history aren’t limited to the cast, however. Director Josef Kubota Wladyka’s grandfather is a survivor of the atomic bomb attack on Hiroshima. Fellow director Lily Mariye’s grandfather died in camp due to poor medical care, while her mother’s family were interned at Tule Lale, a high-security camp notable for housing ‘radicals.’ Her father came from Hiroshima and lost his whole family when the bomb hit.

“So many Japanese Americans have been touched and affected by this experience that almost no matter who you cast, there is a connection to the internment,” Woo says. “It really did make it special, much more than I could have even imagined.

“Right after we had wrapped, one of the background actors told me his parents were interned as young children and were detained at the very same racetrack where we shot our racetrack scene in episode two, where some of the Japanese-American community are being kept while the camps are being built. Working on our show, he was there with two suitcases getting ready to board a bus and at that moment; he was walking quite literally in the same footsteps as his parents and understood what they had gone through. That’s why this is so special.”

Having worked alongside Six Feet Under creator Alan Ball for five years on vampire drama True Blood, Woo says his approach in the writers room is not to flesh out every detail, instead leaving the individual episode writers the freedom and flexibility to bring their own ideas to the story.

Filming, which kicked off in January this year, took place over 86 days in Vancouver, which was transformed into, among other locations, 1940s wartime California, New Mexico, South Dakota, Japan and the South Pacific.

“It was an unusually cold winter. We had one day of shooting where it was supposed to be June 1942 and it was snowing buckets – we ended up not shooting anything that day because there was no way we could possibly make that snowstorm feel like it made any sense in the South Pacific in June,” recalls Woo, who champions the work of production designer Jonathan McKinstry, cinematographers John Conroy and Barry Dunleavy and costume designer Tish Monaghan in creating the world of the series, which is distributed internationally by AMC Studios Content Distribution.

“It was such a treat for the eyes, far beyond anything I could come up with in the little theatre in my mind. But also our our visual effects department were able to build out all the things we were not practically able to complete ourselves. An internment camp is hundreds upon hundreds of structures, and you cannot practically build that. It would be pointless to do so, so we built a section of the camp, but a large amount of it is done in CG to make it resemble a facility that is made up of buildings and people as far as the eye can see.

“There is a moment in our season where Chester goes up into the guard tower and, for the first time, he sees just the scale of this place, which he’s never able to from the ground, and it’s breathtaking how large it is. That, of course, is the down to the visual effects department.”

Between the supernatural and historical stories in play, there are plenty of ways viewers can enter the world of The Terror. “But whichever way one approaches the show, I hope what we do through the atmosphere and the scares is build a real empathy for the people who lived through this experience,” Woo adds. “Maybe, by extension, viewers will feel something for the people who are suffering this plight today too.”