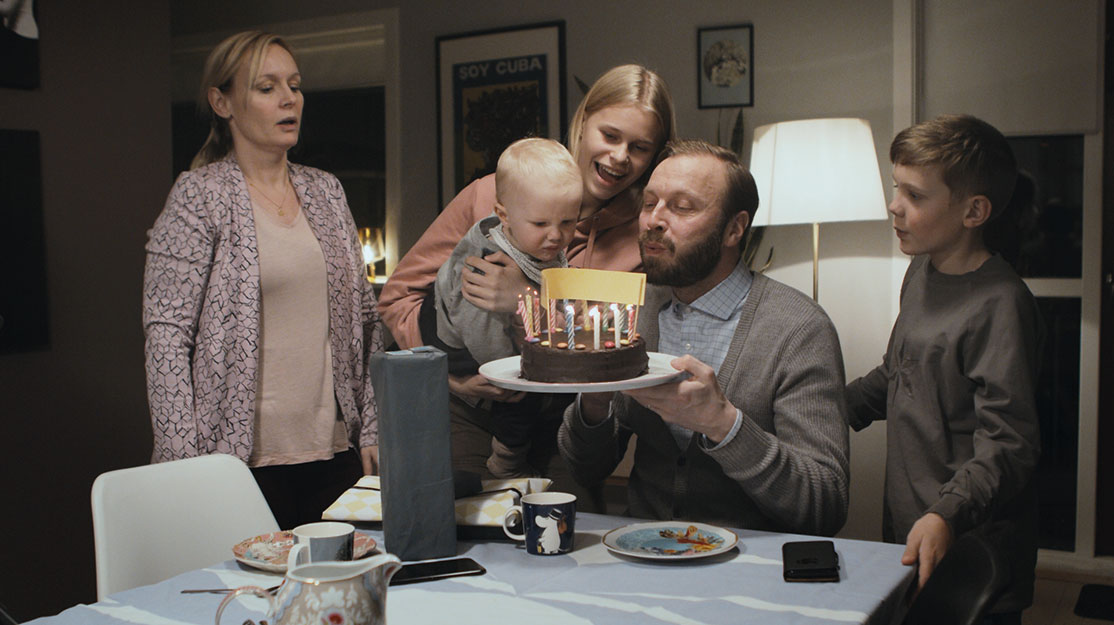 For Icelandic drama Pabbahelgar (Happily Never After), Nanna Kristín Magnúsdóttir juggled writing, directing, producing and acting. She tells DQ how she did it.

In 2018, a short film from Iceland travelled around the world, playing to audiences in destinations including Lübeck, Helsinki, Berlin, Barcelona, Athens and at home in Reykjavik.

Pabbahelgar (Happily Never After) was a six-minute clip in which a woman’s attempt to give her husband a ‘personal’ birthday present becomes rather complicated. But the end credits didn’t mean the end of the story, as the film was always intended as a taster for a six-part drama of the same name created by writer, director, producer and star Nanna Kristín Magnúsdóttir.

“I had written all the scripts for the TV series but then I did the short film to show the Icelandic Film Centre and Icelandic broadcaster RUV, which are funding this,” Magnúsdóttir tells DQ after a screening of the show at French TV festival Série Series. “I did a short to show them that this is what I want to do – ‘this is the tone.’ Some people do trailers, but sometimes they are just like music videos.”

When interest in the film grew, Magnúsdóttir put it out on the festival circuit. The full series, produced by Zik Zak Productions and Cubs Productions, was subsequently picked up for international distribution by Denmark’s REinvent Studios.

“So it worked out great,” she says. “This is a dramedy with a very raw look at Icelandic reality, and I found out through the film that people were not ready for this much rawness. But that was good. I was like, ‘OK, I have to pull back a little in the series without losing what I want to say.’”

That rawness comes from the subject at the heart of Happily Never After: divorce. Magnúsdóttir plays 38-year-old Karen, a marriage counsellor and mother-of-three whose life is turned upside down when she discovers her husband’s infidelity. Suddenly single, she must say goodbye to her dreams of perfect family life, while offering advice to her clients now seems absurd.

The idea for the series first came to Magnúsdóttir when several of her friends were going through divorces, many because of infidelity. “But it was not always the man [who had cheated on his partner], sometimes it was the woman and

they have kids and families and stuff like that,” she explains. “This is interesting because you get so egocentric; all your feelings come out and you sometimes hate the person you loved two months ago, and it’s very, very emotional. There’s a lot of drama.”

When Magnúsdóttir herself went through divorce, she paused her writing to ensure the series didn’t become too personal, noting: “This story is not about me.” When she picked up the project again, Magnúsdóttir decided to inject some more humour into the storyline. Divorce, she says, is a process that can bring out the worst in people, but there’s also humour to be found in the situation.

Those lighter moments are present in Happily Never After’s scripts and the actors’ performances, while the camera acts as a fly on the wall, capturing every aspect of Karen’s emotional turmoil as if it were another person in the room. For much of the first episode, she is forced to put off confronting her husband about his affair by a series of family events that only serve to build the tension within both Karen and the audience waiting for the inevitable clash.

After graduating as an actor, Magnúsdóttir worked for several years in theatre, alongside taking TV and film roles in Iceland. “In Iceland, when you’re an actor, you’re not just a film actor – you do everything,” she says.

With ambitions to direct, she learned that many directors in Iceland write their own scripts, so she enrolled at Vancouver Film School to study screenwriting. Upon returning to her homeland, she immediately made a short, “non-budget” film, Playing With Balls, about a group of older lesbians who become intrigued by a young couple and one woman who decides to act on her desires. “I owe a lot of favours for this short film,” she says. “I didn’t want to get funding because I wanted to know if I could do it, and if I failed nobody would know.”

But the film proved so successful that it was screened at festivals in Toronto and Reykjavik. Another short film, Cubs, followed and again travelled beyond Iceland.

“So then I knew I had a voice, I had something,” she says. “I knew people wanted to watch what I want to show. When I started writing Happily Never After, it was my first time writing in a certain genre for a certain demographic. But because I was trying to write for someone else, it wasn’t that good. I just threw it away. Then I decided I was only going to write what I wanted to write. If nobody likes it, that’s that.”

But until the short film version of Happily Never After, essentially the first scene of episode one, proved to be incredibly popular, there weren’t many people interested in producing the series, “so I had to produce it myself because, at the time, Scandinavian noir was very popular – and nobody dies in my series,” Magnúsdóttir says of adding producer to a list of responsibilities that also included star, writer and director. “People were like, ‘This is not really what people want.’ That’s why I did the short to show what I wanted to do. It was not a burden to be in all these roles – I like to produce and write.

“This is my baby. I’m going to do two more seasons, and we’re starting to develop the next one. But this is not how I want to work [forever]. I want to be more focused on one [job] but this one is special and I had to do it, otherwise it wouldn’t have been made.”

Karen arrives on screens at a time when there are many great female characters populating dramas from around the world. But Magnúsdóttir believes this one is different. “For me as a woman and an actress, I find too often these characters are ‘strong females.’ That’s good, but sometimes they have very manly characteristics and lack what a woman has,” she says. “You can be a strong woman but you don’t have to behave like a man. There needs to be more variety in how you show women on TV. Karen is a mother and a couples counsellor, a friend and a wife – what we all are. We’re good at some things, not so good at other things.

“I wanted to create a female character that is strong but with all the complexity women have, just like men. Men are not flawless; I like flaws. They’re what make people interesting, not just on TV but in daily life too. If you meet a ‘perfect’ person, they are most definitely not perfect. They will have a skeleton in their closet. Perfect is boring.”

It’s in her characters’ flaws, as well as the subject matter, that Magnúsdóttir finds the humour that is sprinkled through the series. And while she concedes the process of divorce is “very dramatic and traumatic,” she says stepping back from it reveals how “eccentric and strange” people can become.

“It’s not a comedy, it’s just a situation that can be fun,” she notes. “But as the season goes on, it becomes more dramatic because it’s also about loneliness. This woman has always done everything in her life with a partner, with her kid, but now every other weekend, the so-called ‘Daddy weekends,’ she has to be with herself all day long, and she hasn’t ever done that. It’s interesting because she’s really good at her job, but in her own life, she can’t really grasp the advice she gives everyone else.”

Once in production, Magnúsdóttir stuck to the script, which allowed her to focus on directing and acting. She also passed the producing baton to Birgitta Björnsdóttir. And despite having a hand in every part of the project, like all TV series, Happily Never After was also a extremely collaborative affair. “This project is so much more than just me. It’s a TV series. If it was all about me, I could just film myself on Facebook,” she says.

Magnúsdóttir’s other credits include writing on Icelandic neo-noir thriller Stella Blomkvist and directing episodes of The Minister, an eight-part series about an unorthodox politician’s rise to power, starring Ólafur Darri Ólafsson (Trapped).

Though taking on four different roles in Happily Never After might be an extreme way to showcase her talents, Magnúsdóttir is clear she won’t stop moving between different roles on future productions.

“In the end, I really love working with people,” she concludes. “It’s different if you’re a director, producer or actor, and it’s nice also for me as a filmmaker to see the process from different points of view.

“When you’re an actor, you don’t really know what’s going on. But as a producer, you get all the complaints. And as a director, you have to answer all kinds of questions, and I like that. I like all these kinds of roles.”