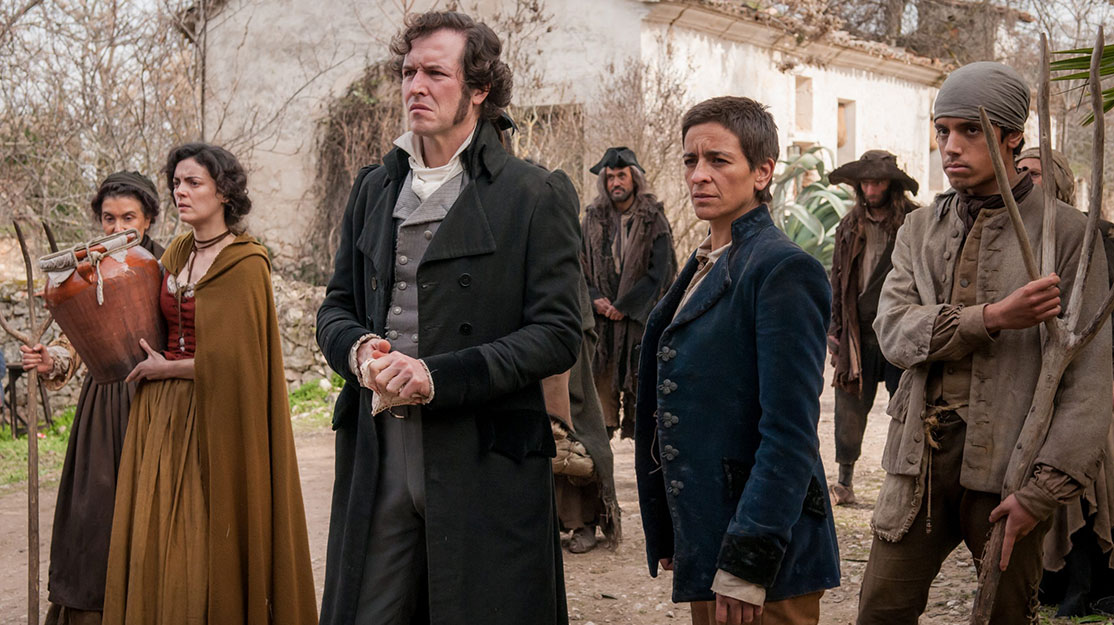 Director Enrique Urbizu and star Bebe travel back in time for Spanish series Libertad, which follows a recently released prisoner and her son as they seek their freedom amid a battle between gunmen and bandits.

Set in the 18th century, a new Spanish series from acclaimed director Enrique Urbizu blends elements of a survival thriller and western to tell the story of a woman and her son seeking freedom in an age of outlaws and bandits.

Five-part drama Libertad introduces Lucia, ‘La Llanera,’ who is released from prison after 17 years years behind bars, disillusioned but hoping to find lasting freedom in a country divided between the wealthy elite and scores of restless bandits.

On her release, Lucia and her son Juan – to whom she gave birth in prison – fall prey to an English chronicler, then a bandolero’s gang and finally to Lagartijo, a famous bandit and Juan’s father. Caught in the middle of the king and his henchmen’s campaign to eradicate the bandoleros once and for all, Lucia and Juan push on in pursuit of their increasingly elusive liberty.

The series marks Urbizu’s return to television and Spanish streamer Movistar+ following Gigantes (Giants), the 2019 series about a family’s drug empire written by Miguel Barros and Michel Gaztambide, who also penned the scripts for Libertad. His attraction to the project grew from the dual elements of the series: the story of Lucia, her son and the numerous characters that populate the story, and that of an English traveller who captures the story of La Llanera in a style that stands in contrast to the ‘Black Legend,’ a campaign at that time that sought to discredit Spain in the eyes of its rivals.

“The story has to do with the so-called ‘Black Legend’ of our country, and is a somewhat romanticised look at a part of Spain’s history,” the director says. “One of the protagonists is an English writer travelling the Spanish peninsula so, as the series proceeds chapter by chapter, he shapes the legend of this woman, Lucia ‘of the Plains.’ Then on the other side, it’s the story of these characters: Lucia, her son Juan, and the other people in the series, as varied as they are.”

In the lead role is Bebe, the stage name of singer and musician María Nieves Rebolledo Vila, who has also built up a notable screen career. In Libertad, she plays a woman who has spent time in prison with the threat of death hanging over her, until she is finally pardoned and released along with her son, who has never known life outside of their cell.

“She’s a strong woman. Obviously prison has hardened her, made her tough – even tougher than she already was – so she gives it all she’s got so that her son can finally live in liberty,” Bebe says. “What she will find, though, is that the powers that be will try to make that freedom impossible. It will be hard work to achieve.”

Though westerns are typically male worlds, Bebe says the show’s environment is a natural one for Lucia, whose character has been shaped by and among men. “As a woman, she has to assume that whatever happens to her, it happens not because she is a woman, not because she is a victim but because it is something life throws your way. She just toughens with every blow, accepting ‘life’s a bitch,’ basically. It is what it is to her.”

Bebe describes Libertad and the role of Lucia as “a gift from heaven,” adding that she understood her character from the start. “It was as if I had her inside me already, which never happens to me,” she notes. “She was new to me because I’m more the practical type, more the down-to-earth type, with no crazy ideas in my head. But I just felt I knew her very well. Plus Enrique made it very easy on us too, by encouraging us not to complicate anything. ‘Don’t go making up worlds of your own, just go with the flow of the role. Each character leaves an imprint on us seen through your character,’ he said.

“The work Jason [Fernández], who plays my son, and I did together also came very naturally. And having to learn to ride a horse was something I enjoyed tremendously. It’s something I’d always dreamed of but by learning how, not by cheating! And then riding through the fields, it was wonderful.”

The actor says she went “all in” for the character, which also involved having her hair cropped short – something she admits was one of the toughest parts of the role.

“While it was clear to me it had to be [that way], it was still tough for me as well as for Lucia,” she explains. “I have no doubt that before she got thrown into jail, she was a heck of a woman. You can imagine her as beautiful, impressive and, having been raised among men, she had made it. Having your hair cut off in that day and age was a strong statement, so I used this as something that illustrated who and how she was deep inside, with the look hardening her even more.”

Produced by Lazona and distributed by Beta Film, Libertad marks the latest original drama series from Movistar+, which is also the home of Los Espabilados,  Dime Quién Soy,  La Unidad, Arde Madrid, Hierro and La Embarcadero. The series rolls out on the platform today, just one part of a launch schedule that will also see it simultaneously released as a 135-minute cut in cinemas across Spain.

“This isn’t really a western, it’s a piece about the history of Spain in the 19th century – a century when this country tried to fight for freedom. We weren’t very successful but that attempt was there and that, as a metaphor, is very powerful in this story. In a very realistic way, these characters are trying to survive in a country where it was very difficult, where most of the people lived in villages in rural areas where they were victims of injustice, hunger and poverty. Trying to tell a story that is very close to our history was something very relevant [to us]. The storytelling is unique and Enrique’s involvement in the project was key for us.”

At a time of lockdowns around the world, it’s notable that 90% of Libertad takes place outside, surrounded by nature, which Urbizu says gave him the chance to open a huge window onto the story of Lucia and her son.

“It’s the ferocious struggle of a woman and her son for self-determination and control over their lives against all the powers opposing them – and they actually reach, or at least get very close to reaching, those goals,” he says. “That’s the story to be seen and enjoyed.”