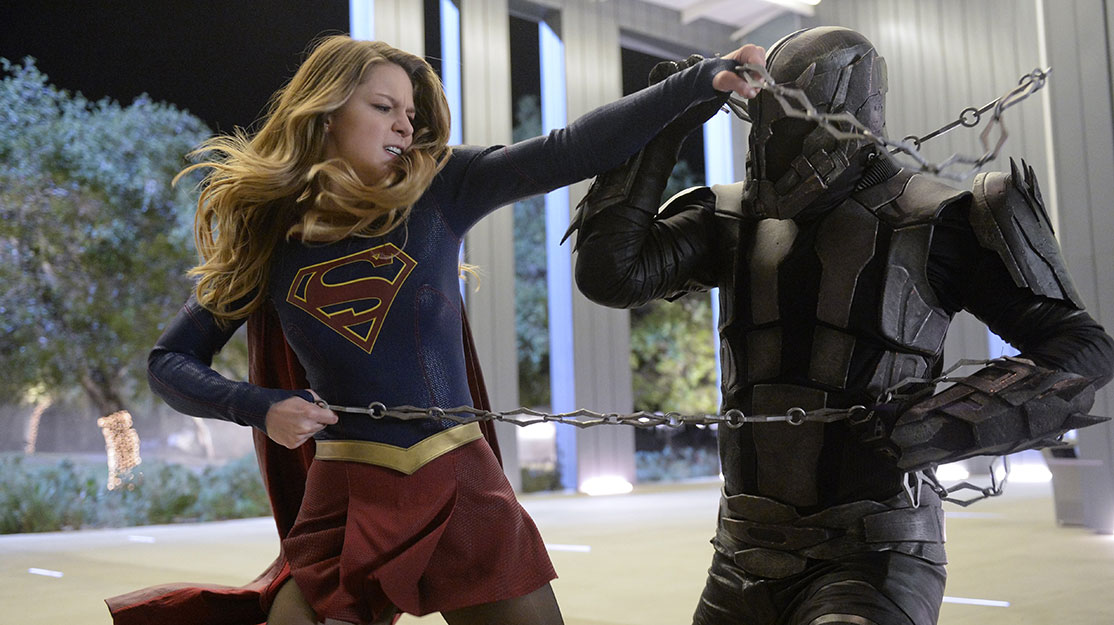 While the superheroes of DC and Marvel – The Flash, Arrow, Hawkeye and Supergirl (above) among them – have come to dominate comic book adaptations on television, dozens of independent titles have also made it to the screen small screen. The Walking Dead, Van Helsing, Wynonna Earp and The Boys, as well as Spanish titles La Fortuna and Red Eagle, are just some of the comics and graphic novels to have landed on TV.

But what do comic book creators and television showrunners make of the trend for these adaptations, and how can these characters and stories best make the transition from page to screen? During Content London last year, Jed Mercurio, Adam Glass, Quoc Dang Tran and Peter Milligan shared a stage to discuss these topics and more.

A lot of people wrongly equate comic books with superheroes…
Peter Milligan, who has written for DC’s Batman and Marvel’s Elektra: There’s the old-school fans of Marvel and DC who grew up with superheroes, and they would be the superhero fans. But ‘superheroes’ is just a genre within comic books. There’s quite a difference between those people who buy every episode of Thor or The Amazing Spider-Man and really dig that kind of stuff, and then the kind of reader who gets into independent stuff, which is more niche and perhaps more personal to the writers and the artist. It’s a very broad church.
I used to work for both but, more and more, I’m just working for independent companies. Sales aren’t as good but we get much more artistic satisfaction because you’re creating a lot of stories and you’re doing the things you really love to do, and you often get to own it.

But the proliferation of comic book adaptations for TV and film – plus computer games – means there are more ways than ever to enjoy the same characters and the worlds they inhabit…
Adam Glass, who has written for Marvel’s Deadpool and DC’s The Suicide Squad: It’s all bleeding together. There’s so much television now, so much content, and people are looking to find these stories that they love. I grew up reading comic books, so everything I loved about superheroes came from comic books. My son grew up playing video games, and he did not read comic books. But this generation is finding it in a different way; they’re finding it through television and through video games. They’re not necessarily buying the books, but this doesn’t mean they love the universe any less.

Whether you’re writing a comic book or a television series, collaboration is key…
Line of Duty and Bodyguard creator Jed Mercurio: In TV, you write the script and you collaborate with all the people who realise it, and the same applies to a comic book. That collaboration between the writers and the artist is crucial. What tends to be the challenge is making sure everybody is aiming in the same direction. Whatever medium you work in, if those relationships are good and you’re proud of the work and proud of the collaboration then it’s fun, and that makes it easier.

Mercurio has written a graphic novel called Sleeper, which was originally developed as a television series…
Mercurio: The crossover has never been more productive than it is now. You are seeing creators moving from one format and one medium to another, and that fluidity is really important for the industry. We created something that, as TV writers, we regarded as being a viable TV show. But what we learnt from that process was that having something exist as a comic book or graphic novel would actually enhance the development process.

But Sleeper, a futuristic story set in space, would not be a cheap show to make…
Mercurio: There is an inverse relationship between budget and creative freedom. The first show I ever made was made not because of my creative input, but because it was so cheap that they took a chance on that, and I’m very grateful they did. But if it had been an expensive show, it wouldn’t have been made.
Sometimes, ideas need to live in a way that is cost-effective. Sleeper, which is set on Titan two centuries in the future and is quite a large-scale drama and conspiracy thriller, would be very expensive to make because of the visual effects and the SFX and so forth. The fact it can exist in the form we intend through a comic book is a way of being able to express that creatively rather than having the financial gatekeepers saying, ‘Well, you need to make it cheaper or, even better, don’t make it at all.’

French screenwriter Quoc Dang Tran, who is adapting Japanese manga Drops of God for Hulu Japan and France Télévisions, initially struggled to adapt the bestselling story, which is told across 44 volumes…
Tran: When I first read the first volume of the whole thing, it blew my mind. I took the book and I threw it on the floor because I thought it was impossible [to adapt] because it’s affecting manga, meaning you go through the motions and the emotions at a fast pace.
You can’t do that in a TV series because, in Japanese manga, sometimes there is no structure, or there is a structure that goes in different directions. On one page, the main character is crying, the next page he’s happy and then it moves to something else and he dreams of something and then goes back to reality. I thought, ‘How am I going to do that?’ It was very difficult.
The second obstacle is it’s a manga, which means it’s anchored in Japanese culture. It’s a different vision of the world. It’s about sacrifice, that the world is unfair. You need courage to do anything and you need to sacrifice yourself for the greater good. That’s why it’s such a difficult thing to adapt, because when you try to westernise something, you lose something, so that was a trap. I don’t know if I avoided it, but that’s why I divided the story.
The characters were all Japanese in Drops of God and the temptation would have been to make them French. But I didn’t do that. I created a French character and a Japanese character, so it’s East vs West in some way.

Milligan says that when comic books are adapted for the screen, a lot of their individuality is often lost in translation…
Milligan: There’s an idea or presumption that, because films are generally bigger-budget, it automatically means they’re smarter and they’re intelligent. And there’s this idea that comics are the junior partner; that as soon as one gets turned into TV or film, it becomes more intelligent.
Often, when I see films made from comic books, they are less intelligent. Somehow, some of the individuality of the comic book has been rounded out and some of the strangeness, the individuality, the sense of an authorial voice and the sense of the theme has been merged out, so it becomes more of a general commercial property.
A lot of people feel that a thing they love, comic books, have become a feeder team for TV and, therefore, they’re the junior team. Artistically, if you take away the money and you take away all the glitter, comic books sometimes can be an excellent way to tell a particular story. It’s a partnership, rather than a stepping up to something that is more adult – ‘OK, we’ve seen the kiddie version, now let’s see the adult version.’ Often, that isn’t how it works.

Glass: Some things live better in the comic space. You could say the same thing about plays. Les Misérables, I love as a play. I’ve never seen a great adaption of it as a movie. It’s stronger and more powerful to me on the stage. It’s the same thing with comics: there are certain books that I don’t know if an adaption would make it better.

Often, the best adaptation isn’t a direct translation…
Tran: There is an Italian proverb, ‘Traduttore, traditore,’ which means the translator is a traitor. I didn’t want to just translate the manga into TV form. I read all of them and then I forgot about them, but I remember how I felt about them. Do I respect the concept? Yes. Did I respect the essence of the characters? Yes. And is the theme respected also? Yes. I don’t know if these are the most important boxes, but I did check them and, hopefully, it works out and [the creators] will recognise their child in some form.

Whether you’re writing a comic book or a TV series, the idea should always come before settling on which medium is the best way to tell it…
Mercurio: As you start developing an idea as a creator, you’re looking at the obstacles, the pitfalls, the things that will engage a reader or an audience, and how you get through the story.
Sometimes you realise that putting this on the screen will have all kinds of problems in terms of how you actually realise the story. Maybe it needs to be a prose novel, which has enormous bandwidth. You can describe all the human senses, you can deal with memory. You can tell backstory, present story and forward story all at the same time. You can do passage of time in one sentence: “A million years later…”
It’s the same process as screenwriting: is this a single story that’s closed-ended? Is it a movie? Is it something episodic? Is it serialised? It’s the same process. If you just work in one medium like TV, you have to have the skill set to go through that process. And if you are fortunate enough to have opportunities to work in different mediums then it’s just something else that gets added into the process.