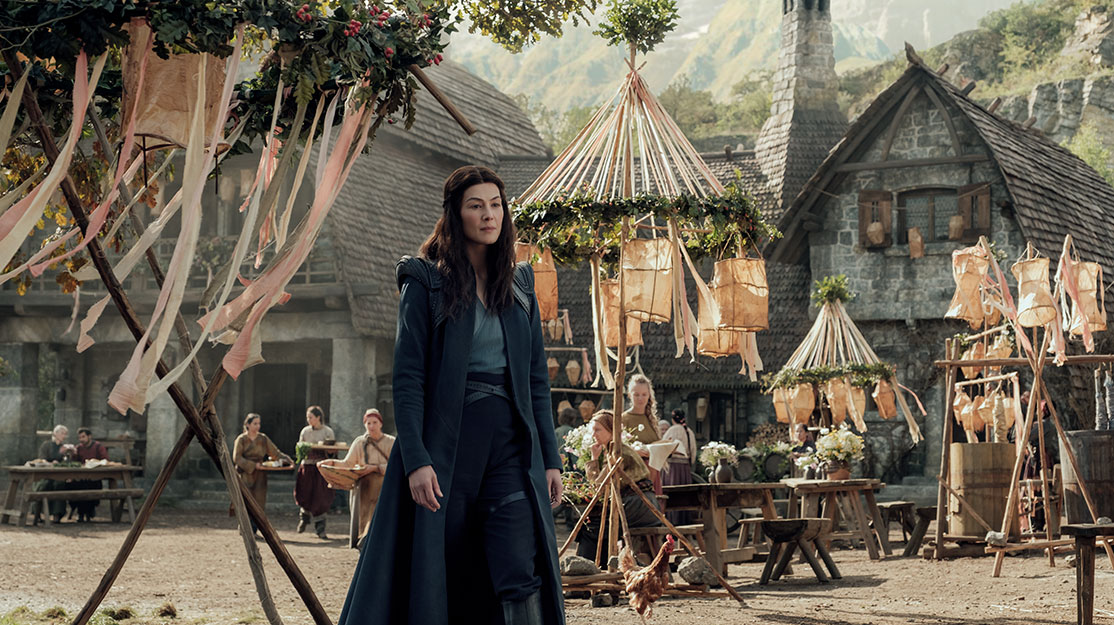 Director Ciarán Donnelly discusses directing episodes of epic fantasy adventure The Wheel of Time, which took him to fictional locations such as the Eye of the World and brought him face to face with beastly Trollocs.

Directors joining a production midway through filming face the challenge of continuing the show’s visual aesthetic and tone while also bringing their own thoughts and ideas to the episodes they are shooting.

For Irish director Ciarán Donnelly, the scale of that task was particularly heightened when he signed on to helm the climactic two episodes of the first season of The Wheel of Time, Prime Video’s epic fantasy drama that is set in a world where magic exists but only certain women are allowed to access it.

Based on the sprawling books by Robert Jordan – there are 14 in the series, running to an average of 800 pages each – the show stars Rosamund Pike (Gone Girl) as Moiraine Damodred, a member of the powerful Aes Sedai. When she arrives in the small town of Two Rivers, she embarks on a dangerous, world-spanning journey with five young men and women, one of whom is prophesied to be the Dragon Reborn, who will either save or destroy humanity.

Filmed in Prague in the Czech Republic and produced by Amazon Studios and Sony Pictures Television, The Wheel of Time is led by showrunner Rafe Judkins (Agents of SHIELD). Uta Briesewitz directed the opening two episodes that establish the world of the show and the powers that can be harnessed by the Aes Sedai, before Wayne Yip and Salli Richardson each picked up a pair of episodes. Donnelly then directed season-concluding instalments The Dark Along the Ways and The Eye of the World.

Already aware of Jordan’s novels when he was first approached to join the directing team, Donnelly was won over by Judkins’ enthusiasm and vision for the show. That a film star such as Pike was attached to lead the cast – she was last seen on television in Nick Hornby’s 2019 shortform series State of the Union – was also enticing.

“I thought, ‘Well, this just seems to add up to something that I think will stick around,’” he says. “Every once in a while, there’s a show that feels like they’ll be talking about it in 10 years, or one that the fans who come to it will remember. I’m very glad to have been part of it.”

While directing the final two episodes of season one carried the weight of tying up numerous storylines that had been building through the previous six parts, Donnelly also had to consider the fact he would be setting up characters and stories to carry over into season two.

In addition, his episodes took viewers to fantastical settings such as the Eye of the World and the Blight, and involved big set pieces such as the Blood Snow fight that opened episode seven and a battle with the horned Trollocs in episode eight.

“You know you’re coming to the end of something and that you’re also setting something else up, so I’m trying to bring as much as I can in terms of visual flair, world building, character story and emotion – because it can all look fantastic but, if it isn’t emotionally involving, it doesn’t really add up,” Donnelly says. He particularly praises the cast for giving “1000%” effort, and recalls a scene with Pike and Stradowski where they arrive at the Eye of the World for a showdown with the story’s evil force, The Dark One.

“They put plentiful resources in terms of time and schedule to really work on these scenes, not just from a visual execution point of view but also to make sure we got performances that were going to be compelling,” he says. “One would compare it to Game of Thrones in terms of time and resources, but it is rare. Happily for me, it’s a world I fit into. I feel very comfortable carrying that kind of weight, directorially speaking, but I really do rise to it. Therefore I was trying to invent, develop and innovate and best the last thing that had been done.”

During his spell of pre-production, Donnelly spoke with his fellow directors – a process that was broken up by the pandemic, much like his filming schedule. He was able to watch early rough cuts of each episode to see how they had been shot. But each director wasn’t given a brief to simply emulate what had been shot before.

“Good producers and showrunners do say to directors they want and they value that they want you to bring your own tone, flavour, approach or style, as long as it’s not going too off-piste, of course,” he notes. “It can’t suddenly turn into a completely different show. But they picked directors who have in a similar feel. You can see a difference in each block, in each pair of episodes, but it’s not like it ever takes you out of the show. Each director is trying to bring their A-game anyway. All the directors were fantastic, but bringing the first season to its conclusion and knowing they wanted a big out was great for me.”

Pre-production ran for eight weeks, before Donnelly’s “enormous” 56-day shooting block got underway. Some sequences, such as the aforementioned End of the World showdown, took four days alone. Rehearsals would take place with the cast when they were available, but particularly when new actors such as Fares Fares, who plays The Dark One, would arrive on set.

“I was able to get him and Rosamund into the room and we would work through all of their scenes,” the director says. “It was one of the few occasions where I actually had cast to rehearse properly and reasonably rigorously. With all the cast, but particularly with Rosamund, there was a desire to connect with the directors coming in. Rosamund really comes from a filmic background and likes to form a relationship with the director that is quite deep from a working perspective. That was really valuable for me.”

Visual effects were added to scenes where characters use magic – the ‘One Power,’ which is only available to women. But otherwise, most of the show was shot on built stages at Jordan Studios, named after Robert Jordan, in Prague with relatively little reliance on green or blue screens to create locations such as The Blight, a desolate wasteland, or the Eye of the World, a structure that rose 40 feet into the air and was further extended in post-production.

Krypton’s Ondrej Nekvasil is The Wheel of Time’s production designer, with costumes by Isis Mussenden (The Chronicles of Narnia) and make-up effects by Nick Dudman (Harry Potter).

“This is one of those shows where literally everything is made,” Donnelly says. “There are massive workshops where they build houses, wagons, mugs and spoons, as well as costumes. Most of that is designed and specially built because it’s all out of the books and there are all these very specific worlds and communities of people who you meet along the way. It’s not like these things can be hired; they don’t exist. It’s a massive undertaking.

“At one point, we were supposed to film in Tenerife where there is a particular type of forest that was wanted to shoot as the Blight. But because of the pandemic, we weren’t able to go. Ondrej came up with the idea of these upside-down tree-type structures, which was really cool, and I actually think that’s one of those scenarios where we benefited story-wise and visually from not going with the initial plan. Sometimes you get a happy accident like that. Naturally, there was a bit of blue screen work but we had a lot of locations and a lot of big set builds.”

The director recalls some of the Czech drivers and other crew members becoming hooked on Jordan’s books once they began working on the show, and says it is the complexity of the world the late author created that attracted a legion of fans long before a TV series was first conceived.

“There are so many twists and turns, so many new characters. It’s one of those things that, once you start reading it, it’s quite hard to put it down,” he says. “You will have people who might not ever have been interested in this type of book getting through all 14 of them. Rafe is walking the walk in terms of understanding how to turn these tomes into a compelling TV series. They’re the elements that swayed me towards it, for sure.”

While The Wheel of Time is already in production on its second season, Donnelly is now turning his attention to projects of his own. They include a miniseries based on Rosemary Sullivan’s book Stalin’s Daughter, about the life of Svetlana Alliluyeva, who defected to the US in the 1960s; Cornflakes for Dinner, a movie based on Irish comedian Aidan Comerford’s memoir about being a parent of children with autism; and an original series about a young woman who works in the probation service.

But having previously worked on shows such as Vikings, Altered Carbon, Camelot and The Tudors, it’s notable when Donnelly says The Wheel of Time was “truly one of the most exciting experiences I’ve ever had as a director.”

He continues: “I’ve worked on a lot of large shows and other shows of scale in this sort of world. But this really walked the walk in terms of world-building because, as a show, it moves on every two episodes to a new world. You’re not revisiting sets and revisiting locations. Everything is new all of the time because of the nature of the story. That’s really exciting and obviously very costly, but they didn’t cut any corners when it came to building the world of the show.”