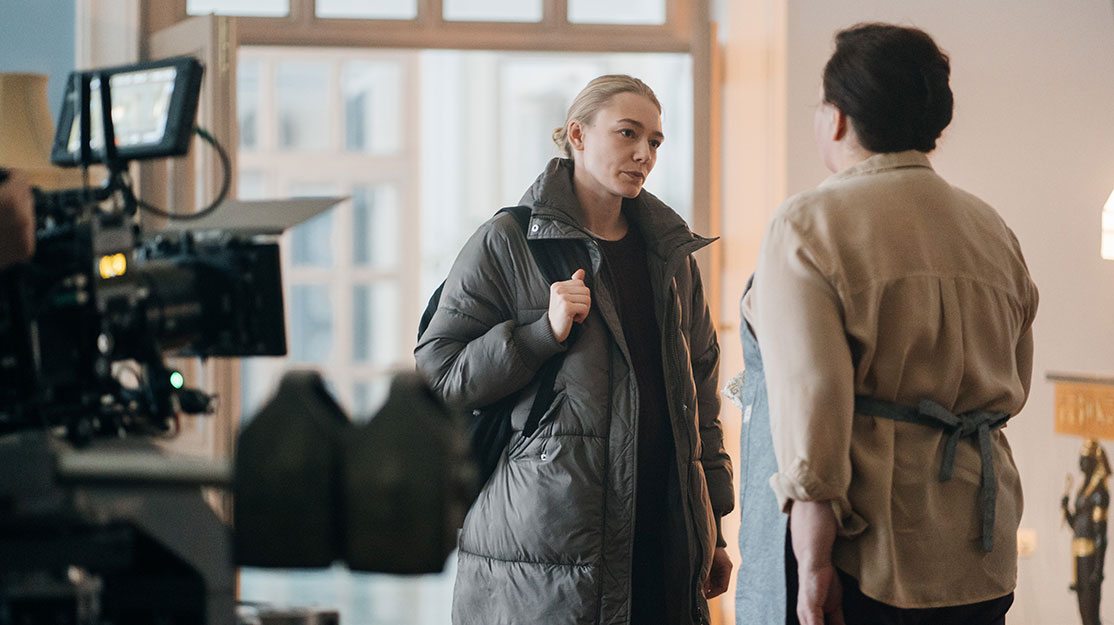 Aleksey Lyapichev, the writer and creative producer of Russian drama Container, and Daria Bondarenko, exec VP of sales and acquisitions for streamer Start, explain how they navigated the moral issues surrounding surrogacy in this unflinching eight-part series.

From Start, the Russian streaming platform behind local dramas such as 257 Reasons to Live, Passengers, Better Than Us and Sherlock: The Russian Chronicles, comes a series about a young girl who is drawn into the world of surrogacy.

Eight-part series Container, produced and distributed by Start, is described as a bold, unflinching story highlighting the challenges and choices of contemporary surrogacy. It follows Sasha, a professional surrogate mother who takes the unusual step of moving in with the couple whose baby she is carrying. But behind the privileged facade of government official Vadim and his wife Marina lie some hidden secrets, while Sasha has secrets of her own.

The cast includes Oksana Akinshina, Filipp Yankovskiy, Mariya Fomina, Artem Bystrov, Yuliya Aug and Mariya Lobanova. Aleksey Lyapichev is the writer and creative producer of the show, which is directed by Maksim Sveshnikov.

Here, Lyapichev and Daria Bondarenko, Start’s exec VP of sales and acquisitions, tell DQ more about the themes at the heart of the series and how the production overcame filming in the harsh Moscow winter.

Introduce us to the story of Container.
Lyapichev: Container is the story of a surrogate mother, Sasha. The final baby she carries for other people ends up dramatically changing her own life. In a bid to escape the problems of her past, she moves into the home of the intended parents, something she has never done before as a surrogate, but this only complicates her already difficult situation.

Bondarenko: This is a bold, unflinching, gripping drama highlighting the challenges and choices of contemporary surrogacy. Sasha makes her living as a professional surrogate mother. Our series starts when, contrary to the usual practice, Sasha moves in with her new clients until the birth. She finds herself in a different world – in the house of rich government official Vadim and his wife Marina.
For them, Sasha is merely a ‘container’ – their new toy. But what was intended as a safe environment for their future child turns out to be a test for everyone involved. Is she just a vessel, their baby machine – ultimately disposable – or does Sasha have her own motives and secrets to hide too? Container looks at the ambitions people have and the mistakes they make. It’s a complex but relatable drama with a very sensitive, global topic at the heart of the story.

What are the origins of the project?
Lyapichev: Surrogacy is becoming an increasingly accessible and in-demand service. It felt like a fascinating topic to study, looking at all aspects of the relationship between parents and surrogates. As I delved into the issue, I wanted to create the story that has now become Container. Is surrogacy a service of the future or a fleeting trend and a feat of modern medicine?

What themes did you want to talk about?
Lyapichev: The most interesting questions related to surrogacy are the moral ones. What motivates one side to seek out such services, and the other to offer them? These are all people with differing fates, and each has their own justification for this artificial approach to bringing a child into the world.

Bondarenko: In a nutshell, we touch upon the ethics around pregnancy and giving birth to new life in exchange for money, as well as people’s perceptions of surrogate motherhood. Some people feel they know better than others, and this looms over the series. We also see the awkward marriage of the couple that hires Sasha. Behind their beautiful facade there are a host of murky problems. And for Sasha, carrying someone else’s child is not just an emotionally taxing process, but also it comes with all of the trials of a regular pregnancy.

Who are the main characters and how do we follow them through the story?
Lyapichev: In the series, we follow both parties in the surrogate relationship – the intended parents and the surrogate mother – and see how their lives are changed by the highly unusual decision to move the surrogate mother into the intended parents’ home. It is a coming together of two worlds, both of which have their secrets. These secrets quietly float up to the surface and begin to intersect.

Where was the series filmed and how are locations used through the story?
Lyapichev: It was shot in Moscow during the winter of 2020/21. The intended parents are a fairly wealthy and influential couple, so we used an area where similar people live to provide a realistic location for their home, specifically one of the elite towns in the upscale Rublevka district. We did not use any sets for this series; everything was shot in real locations that matched those described in the script.

What were the biggest challenges you faced making the show?
Lyapichev: The biggest challenge was, oddly enough, the Russian winter. Some shoots took place at night during the coldest parts of the winter. You might think we’d be used to it, being Russian, but no. Some shoots were physically tough and we have to give credit to the actors because they manage not to look cold at all in the scenes we shot, despite the fact that they’re in relatively light clothing and the temperature was below 20 degrees Fahrenheit [-6°C].

How did Covid-19 affect the production, either in development or production?
Lyapichev: As with all the other shoots going on in the world right now, everything was done in strict compliance with all health regulations. But I have to say that this didn’t really complicate the process. On the contrary – we all finished filming as healthy as we were when we started.

What do you hope viewers take from the series?
Lyapichev: I’d like viewers to engage with all of the characters’ stories, and to reflect on how right or natural all this is and what would happen if this procedure were to become an integral part of our future. The whole world is changing and things that once seemed strange will soon become normal. This doesn’t just apply to surrogacy, but to anything new or modern that makes our lives easier. Are we on the right path, how is all this affecting us now and what will it lead to in the future?

Bondarenko: The key idea of all our series is to entertain, so it will be amazing to get international audiences attracted to another beautiful Russian production. It has already got a few accolades, with MipDrama being the first to recognise it, and we will be pleased to announce another big event around it soon. We believe special series can be educational while also touching upon serious questions to challenge our viewers and leave them with a different aftertaste, something more than just another twisted drama.
Container may help people to look at the complex of issues of surrogacy from another angle, such as payment for pregnancy and labour exploitation and inequality. Is it immoral, or can we buy happiness for money?

Why might the series appeal to international viewers?
Lyapichev: Every country has its own national policy on surrogacy: in some it is prohibited, in others it is allowed but, regardless, it is a service that is known and understood by all. People from countries where surrogacy is prohibited travel to countries where it is allowed, so this is a story that will be understood by viewers in any country. In the end, it’s less about surrogacy and more about people’s lives. And the emotions, feelings and events in their lives are equally familiar to people all over the world.

Bondarenko: The story itself has a global appeal, so we hope it will resonate among different audiences around the world. Besides exploring this sensitive topic, this series goes deeper into the complex nature of human beings. We feel that Container is a strong, relatable dramatic story that could work in a range of territories.