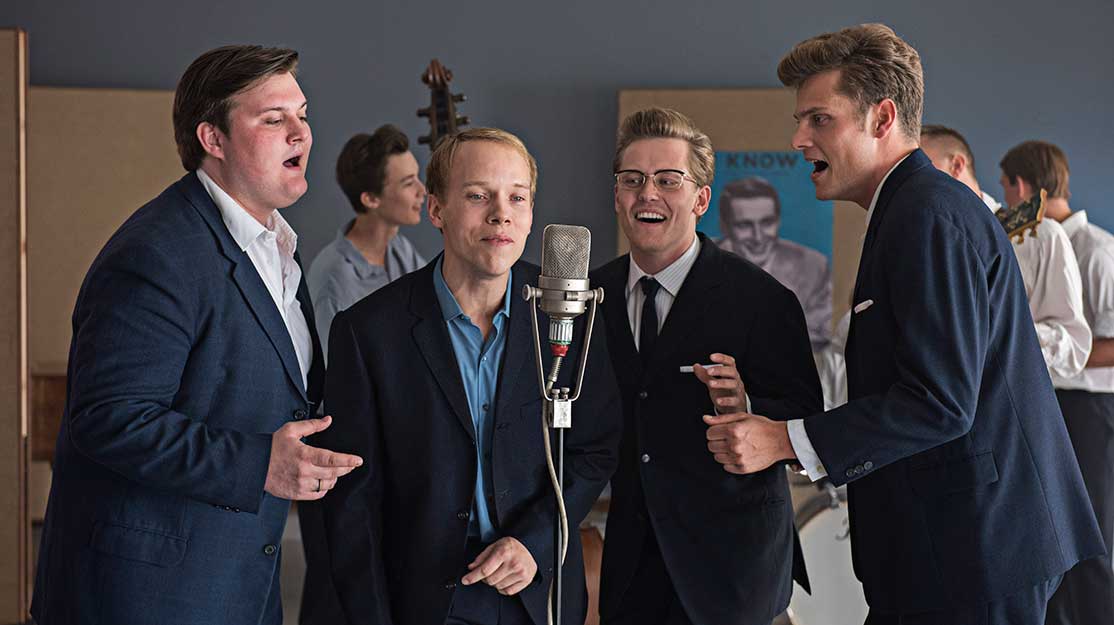 Writer Søren Frellesen and producer Sven Clausen tell DQ about Danish drama Mercur (Something’s Rockin’), which charts the rise and fall of an offshore radio station in the 1950s and 1960s.

The first offshore commercial radio station ever to hit European airwaves, Denmark’s Radio Mercur launched from a ship called the Cheeta in the Øresund waters off the coast of Copenhagen in 1958.

Its founders’ aim was to break the monopoly held by state-owned radio stations and bring an emerging music genre called rock ’n’ roll to the young audience that demanded to hear it.

The story of its rise and fall is now being retold in Mercur (Something’s Rockin’), a 10-part drama currently airing on TV2 Charlie that tells this true story through the eyes of three fictional protagonists.

As creator and head writer Søren Frellesen tells DQ, the drama follows “a bunch of fun and freedom-loving young people who created a popular commercial radio station back in the days when all mass media was controlled by the state.”

He continues: “From 1958 to 1962, Radio Mercur became wildly popular, mainly because they played all the new rock and pop music that Danish state radio refused to play.

“It’s a story about big dreamers and their big dreams. And back in the late ‘50s, big dreams could be just a single mother wanting her own flat. So even though the story is about how some young people got a ship and placed it in international waters between Denmark and Sweden – thus escaping the media monopoly and changing post-war Denmark – I have always felt the story is really about our three main characters growing up and finding, or not finding, their course in life.”

The first original drama series for TV2 Charlie, Mercur is produced by SAM Productions and distributed by StudioCanal in co-operation with TV2 Productions & Rights.

It debuted in Denmark with the channel’s highest-ever rating of 630,000 viewers, with deals to air the series in Norway and Sweden already tied up.

Mercur spent almost two years in development before filming began, with producer Sven Clausen recalling that, at one point, it almost wasn’t made as there were questions over whether it should be a music entertainment or politically minded drama.

“I had a call from the head of drama asking if I could look at it because she thought there was definitely a series there,” Clausen says. “I looked at three scripts and seven storylines for the remaining episodes and she was right. The real story was there but what the channel wanted was a music show, so we had to crack that one way or another.”

The solution was to bring live musical performances into each episode, filmed as if the bands were making recordings to play on the station, while an eclectic mix of international music, largely from the UK and US, was also used in the soundtrack.

Clausen continues: “The only time we don’t have a live performance is in episode one, when the radio station is not yet established. Instead, the characters go and watch [British rock ’n’ roll star] Tommy Steele perform, which he actually did in Denmark in 1958.

“I borrowed a sequence from one of his movies and we used a trick to put him in the show by having our characters backstage at the concert, watching what’s happening on stage on the small monitor, which is the film clip. Then we found a chap in London who is a lookalike so in the interval, this chap pops up and speaks a bit and that is it. And it works very well.”

In the writers room, Frellesen was assisted by co-creator Jesper Malmose and Jenny Lund Madsen. They storylined all 10 episodes together before Frellesen wrote the pilot and three other episodes, and co-wrote the final two. He also did the final drafts of the remaining episodes that were started by Malmose and Madsen.

“But I have to say, it was primarily due to the practicalities of the shoot and the mountains of notes always dropping in that further writing was necessary,” Frellesen says. “It is the first time I have had sole head writer duties, and it was important that the writers got their own voices across. Tom Fontana [Oz], one of my favourite TV writers, talks about having one vision but many voices. I was inspired by his take on team writing.”

That team ethic also extended to the director, Charlotte Sachs Bostrup, who was persuaded to shoot with just one camera in an attempt to bring an authentic 1950s look to the series.

“Being a director myself, I get a little tired of the multi-camera, ‘let’s cover everything and work it out in the editing suite’ approach,” Frellesen says frankly. “Shooting with one camera keeps the decisions on the side of the writer and director. Make up your mind before you shoot. Don’t give other people too many options. I have worked with her before and we always have a lot of script discussions – passionate yet fruitful – but looks-wise we like the same things. We like colours, we like dollies and we want to create a pleasant place to be.”

The three main characters – Anne-Marie, Jan and Flemming – are played by Neel Rønholt, Jon Lange and Andreas Jessen respectively, with each taking on their first lead roles.

“We shot seven pages a day, which is almost irresponsible, unless people are prepared, and these three actors were up to the task and then some,” Frellesen says, praising their ambition and aspiration. “The show is about those three characters coming into their own, and that is what is happening with the careers of those fine actors right now. That gave it some urgency and sincerity.

“They also, at a crucial point towards the end of the shoot, made me realise I had to do some story adjustments, because the characters took on a life of their own. They are some of the smartest actors I have ever worked with, so when they make suggestions, I listen. There is a fine line between being a push-over and being attentive and smart when actors make story suggestions.”

Former DR drama head Clausen produced the series with Stine Meldgaard, who has previously worked with film talents such as Lars Von Trier (Melancholia) and Nikolaj Arcel (A Royal Affair). Together they worked with the network to protect Frellesen’s vision for the story, which the writer says was the biggest challenge he faced.

“And I managed that due to Sven and Stine, my crack team of producers!” he says. “They took all the battles with the network and protected my vision admirably. So even if I formally didn’t have any kind of final say or cut, they protected my ideas all the way through, and if the show is terrible, it is because of me. I can’t think of one important story point I was sorry to see being overruled.”

The producer also reveals another important aspect of the show – a secondary storyline that discusses attitudes towards homosexuality in Denmark – which, along with the music, demonstrates how culture and society was changing at the time.

“That was a remarkable way to tell the story of the past where people were opposed to anything new or anything they didn’t know about,” he adds.

From a production perspective, the relatively small budget also posed a challenge. But this was largely overcome by the fact that, in addition to several days spent filming on location, most of the four-month shoot took place on the grounds of an old naval college outside Copenhagen. There, production designer Søren Gam transformed the many rooms into every possible set needed, while additional locations such as Tivoli and Danish State Radio added further authenticity.

The college was “very good for the budget!” Clausen jokes. “Even in some of the private parts of the school, we were able to film living rooms and offices for some of the characters.”

Mercur continues the Nordic drama trend that is moving away from noirish crime thrillers and exploring different themes and genres. The central issue of youth rebellion, and the use of rock ’n’ roll music, is reminiscent of 2016 German drama Ku’damm 56, in which a young woman fights back against strict social conventions. There are also similarities to 2009 film The Boat that Rocked, about a fictitious pirate radio station that broadcasts from a ship anchored in the North Sea.

But like all good dramas, human relationships are at its heart. “All stories must come from that,” Frellesen concludes. “And on this series I also learned, or was reminded, that nobody, including myself, knows anything, as William Goldman famously put it. It’s a new game every time.”